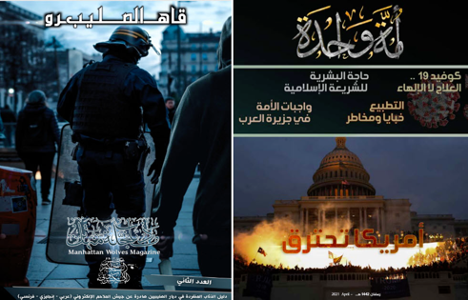 On April 14, 2021, both Al Qaeda and the pro-Al Qaeda propaganda outlet Jaysh Al-Malahim Al-Electroni (Electronic Battle Army) released magazines that include articles about the cultural strife in America and the West more broadly. The articles touched on the January 6, 2021 Capitol insurrection, the racial justice protests in summer 2020, and the deepening of American political divisions. Both articles portray the West as declining and divided.

The Jaysh Al-Malahim article, entitled “The Lone Wolf and the Protests,” encourages Islamist extremists to take advantage of the unrest to further destabilize Western society, while the Al Qaeda article, “America is Burning,” gleefully predicts the imminent collapse of America into civil war.

Because American counterterrorism pressure has severely degraded its capabilities, Al Qaeda appears to believe its best hope of achieving a terrorist attack against the West is to inspire domestic extremists, and both the “America is Burning” and “The Lone Wolf and the Protests” articles are aimed at encouraging potential terrorists to use the societal turmoil as an opening for attacks.

Both articles were released to coincide with the beginning of the Muslim holy month of Ramadan. Historically, Islamist extremist groups have marked the holiday with an increase in the pace and complexity of their attacks, along with a media campaign to highlight the religious significance of jihad. The fact that Al Qaeda has chosen to focus so heavily on turmoil in the West confirms that, even as it entrenches in local conflicts, the group still views its ultimate goal as engaging in a far-reaching, global jihad.

The Al Qaeda piece, “America is Burning,” was released in the One Ummah magazine. It posits that the U.S. has been severely weakened by the COVID-19 pandemic, is on the brink of economic collapse due to stimulus spending and faces insurmountable divisions along racial and political lines. Most provocatively, the article predicts that the proliferation of weapons and the psychological distress of the pandemic is rapidly pushing America towards a second civil war.

After criticizing President Biden’s fiscal policy as wasteful ​and suggesting that the crown prince of Saudi Arabia is wasting resources to win the favor of the White House, the article ​calls for the Saudi government's overthrow, demanding, “when will the Muslim Ummah and its rational people take up stones against this profligate ​young man before he squanders what remains of the Ummah's wealth?” The article also notes that Biden is the second Catholic U.S. president and ​calls his decision to put a photograph of him meeting the pope on his desk an act of provocation against former President Trump's evangelical supporters.  The article wonders whether American Protestants will allow this, “or will [Biden] meet the fate of his Democratic Catholic predecessor John Kennedy?”

The Jaysh al-Malahim’s Wolves of Manhattan magazine article “The Lone Wolf and the Protests,” meanwhile, suggests that the sweeping political protests across the West present an opportunity for Islamist extremists to further destabilize those countries. It offers lone wolves a variety of recommendations, suggesting that extremists infiltrate large, chaotic protests like the French Yellow Vest protests or the American unrest after the 2020 Presidential election.

Islamist extremists, the article continues, should target police officers with car ramming attacks or by inciting violence between police and protestors. It also offers a $60,000 Bitcoin bounty to any extremist who kills a Jewish, Christian or atheist police officer in a Western country. It is highly doubtful that the Al Qaeda supporter group has the capacity to pay out a $60,000 reward. Rather, this offer is a likely an attempt to grab attention and (possibly) motivate inspired attacks.

The focus on inspired attacks suggests that Al Qaeda does not consider directed attacks against the West to be a viable possibility. Inspired terrorist attacks are committed by lone wolf actors or small cells of extremists without instruction from Al Qaeda central leadership. Directed attacks, on the other hand, are planned and orchestrated by Al Qaeda. Inspired attacks tend to be more rudimentary than directed attacks and are impossible for Al Qaeda to oversee, but they are also more difficult for law enforcement to prevent because there often is no clear operational link between Al Qaeda and the attacker.

Al Qaeda prefers directed attacks because they give the group more control over the method and targets of the attack, so the fact that organizers are currently advocating smaller, theoretically more complicated inspired attacks implies that they lack the capacity to direct a terrorist attack in the U.S.

The American intelligence community appears to have arrived at the same conclusion: On April 9, just days before the release of these articles, the Office of the Director of National Intelligence released its Annual Threat Assessment, which found that counterterrorism efforts are a massive impediment to Al Qaeda’s desire to mount directed attacks against the U.S.