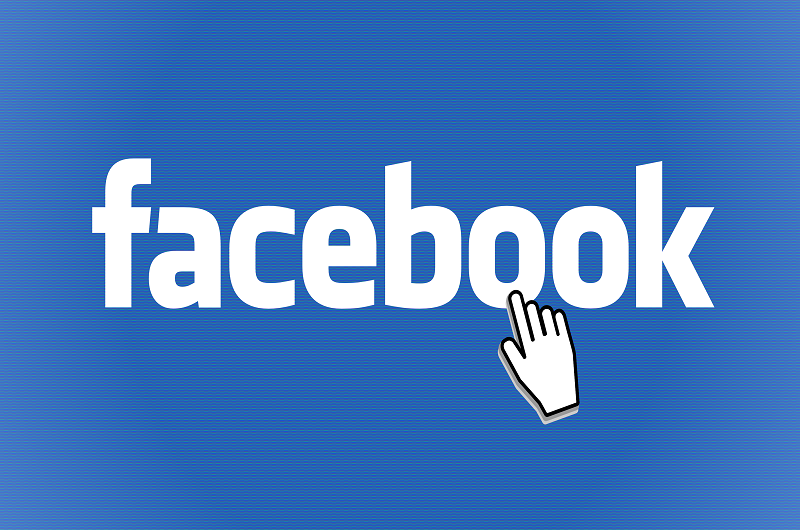 Facebook has been vocal about its recent efforts to suspend and ban hateful, conspiratorial and violent content from its platform. And yet a great deal of extremist content remains.

As of November 16, 2020, even a cursory search of Facebook brings up white supremacist, racist and antisemitic pages. The following is a sampling of extremist groups and individuals currently active on Facebook.

TruNews is a fundamentalist Christian streaming news and opinion platform, whose programs routinely feature antisemitic, anti-Zionist, anti-LGBTQ+, and Islamophobic rhetoric. TruNews founder and host Pastor Rick Wiles has used the YouTube channel to claim that Jews control the media, decimate American culture, and attack Christians. He describes Jews as the “Synagogue of Satan” and as agents of the antichrist. The TruNews Facebook page has almost 200,000 followers. It was banned from YouTube in February 2020.

Example post: “[Rick Wiles:]So in America, we got the federal reserve, the IRS, the income tax, all Zionist operations, without Zionists it never would have happened. So they got control of the money system. They, they suck the money out of the American middle class. They've been doing it for over a hundred years. And then, and then you had world war one. Uh, we could do a whole program on what is going on in world war one with the Zionist. And then you had the Bolshevik revolution in 1917, the Jewish communists took over Russia, killed tens of millions of, of Russian Christians, plunged Russia into communist. Jewish communist tyranny, slavery for 70 years. And, and then also they started infiltrating Palestine. Nothing but a bunch of thugs….They're called Zionists. they’re called the synagogue of Satan. Let's get real about what's going on here, folks. This is a global takeover.” (Posted 5.11.20)

Brother Nathanael is an antisemitic propogandist and preacher. He has referred to Jews as “parasitic” and has called on readers to “save America from Jewish ruin.” He was removed from YouTube for violating terms of service.

Example post: “...Zuckerberg won’t go to jail. In other words, Jews don’t end up in the slammer. If a few Jews do, they’re either used as passes like Bernie Madoff to distract the public from spotting huge globalized Jewish crime.” (Posted 10.29.20)

9/11 Was a Zionist Operation (group) presents the 9/11 terror attacks and a number of other events as “false flag” operations perpetrated by Zionists or Jews. Users also share other conspiracy theories, with posts containing not only anti-Zionist but also antisemitic content. Private group. 1.1K members.

Example post: Image of George Soros with the words, “When an old white Zionist billionaire funds a Black rights movement it’s not because he cares about justice; It’s because he’s using it to fuel civil unrest that will lead to martial law & start of the New World Order.” (Posted 11.15.20)

The White News Network is a Facebook page that promotes a website by the same name. The page, which has 1,600 followers, includes explicitly racist and antisemitic content. 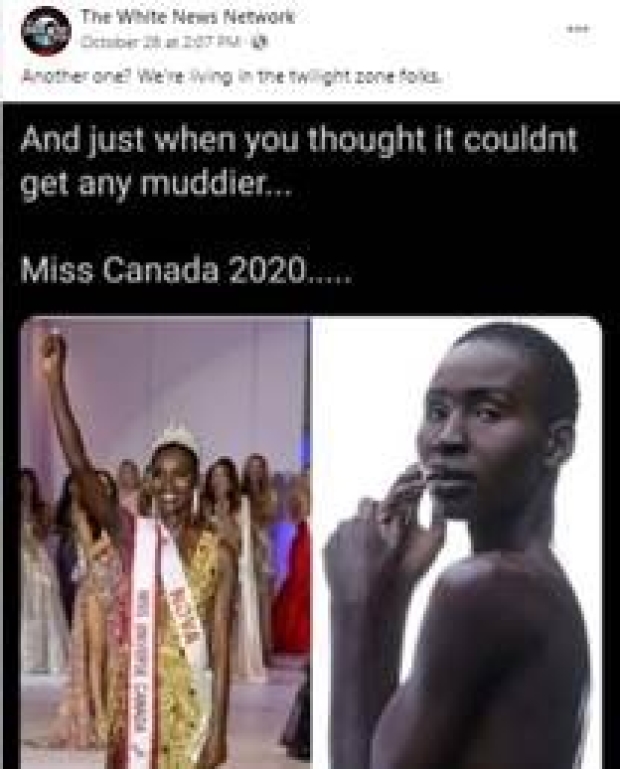 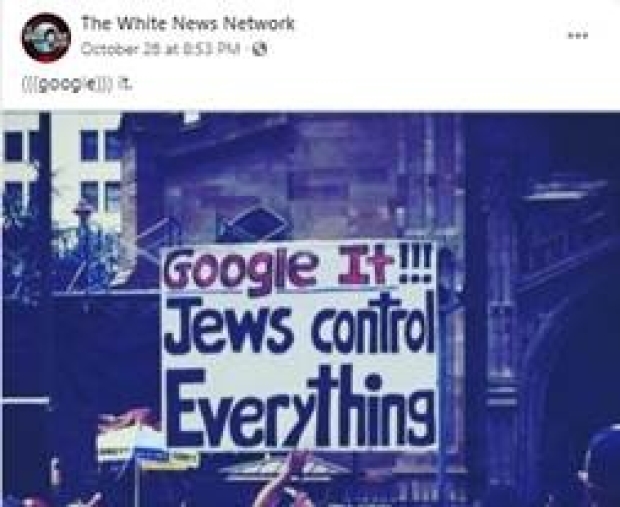 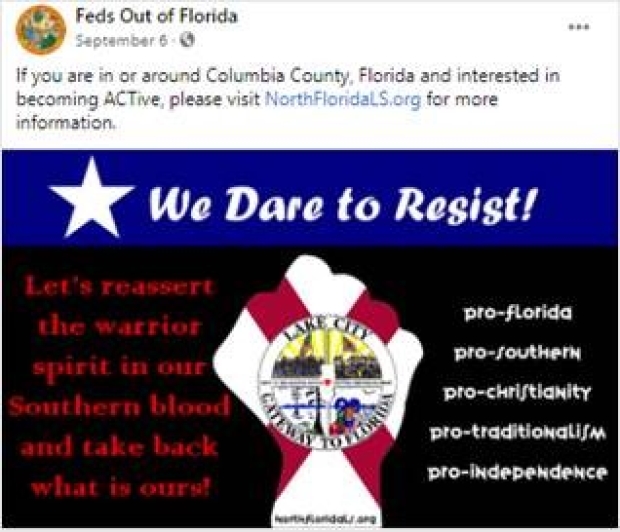 True Israelites is a private Christian Identity Facebook group with 751 members. Christian Identity beliefs center on a racist and antisemitic variation of British-Israelism or Anglo-Israelism, which teaches that people of European ancestry are actually descended from the so-called “Lost Tribes” of ancient Israel and are thus the chosen people of God. Identity believers claim that non-whites were created by God not when God made “man,” but rather when he created the “beasts of the field,” and they refer to non-whites as “mud peoples.”

Before We Were Europeans is a pro-White Facebook page where antisemitic tropes and conspiracies are referenced, and the white supremacist 14 words is a common mantra. It is followed by 5,376 people. Notably the profile image is the symbol for The Order, also sometimes known as the Bruder Schweigen or the Silent Brotherhood, was a white supremacist group the at operated in the Pacific Northwest in the mid-1980’s.

Squadron (one of many white supremacist/white power bands with a Facebook presence) is a white power band based in London, England. Their Facebook page promotes the band’s merchandise, which includes albums and clothing. In the “About” section of the page, they note that they are “28 band from London” -- the 28 is a reference to Blood & Honour, an international racist skinhead umbrella group started decades ago by British white supremacist and singer Ian Stuart Donaldson. 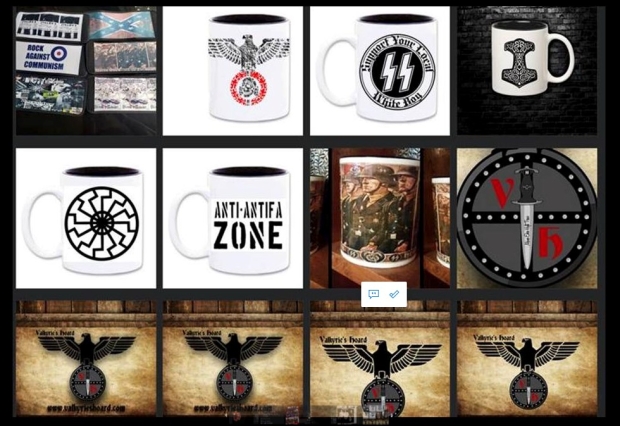 White Lives Matter is a pro-white Facebook page that is followed by 5,009 people. The page promotes the white supremacist world view that unless immediate action is taken the white race is doomed to extinction. The page promotes groups such as the neo-Nazi 14 First Foundation and the Nationalist Justice Party, a recently formed antisemitic white nationalist group.

Groyper Nation is a private Facebook group with 170 members. Its administrators appear to be white supremacists (the profile for one administrator includes a photoshopped image of neo-Nazi and National Alliance founder William Pierce, and another links to the website of a white supremacist political candidate). 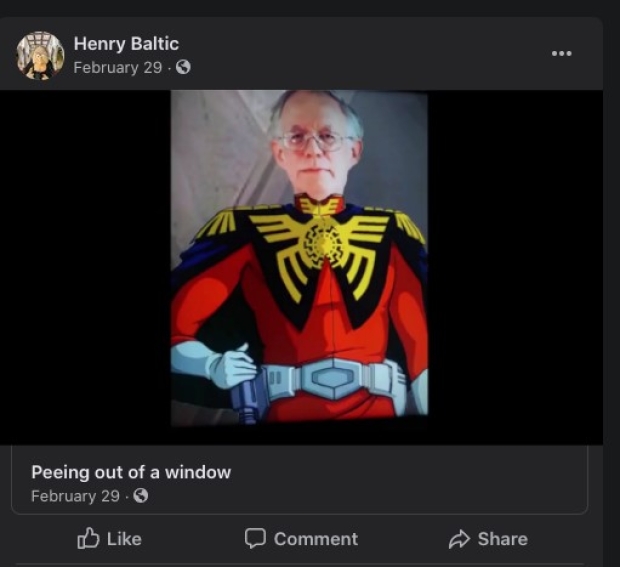 Israel United in Christ is one of the country’s largest antisemitic and extremist Black Hebrew Israelite groups. The content posted to their main Facebook page includes antisemitic, racist, homophobic and other disturbing content posted in accordance to their ideology. Most posts on their Facebook page promote their YouTube sermons, which are riddled with antisemitic and negative commentary. Because BHI is a fringe religious movement, many pages for thought leaders and groups are classified as a “Religious Organization,” “Church” or “Nonprofits” on their pages. The main IUIC page has over 54,000 followers.

Stop Anti-White Racism is a public Facebook group that promotes racism and vile comments directed and communities of color as response to perceived racism against white people. While not everyone in the group could be considered an extremist or posting white supremacist content, there are select individuals that contribute violent and disturbing content. Many posts are full of comments calling for Black men to be killed, for citizens to take violent action against minorities, and other racist content. The group has 2.1K members.

Developing ways to counter online hate requires that we know who is being targeted, the extent to which they are targeted, and the nature of the attacks. Currently Facebook does not publish any of these metrics. Without this information, it is impossible for platforms, researchers, and civil society to create solutions to these problems in a way that is informed by empirical evidence. Platforms should adopt robust accountability and transparency standards. This should include regularly scheduled external, independent audits so that the public knows the extent of hate and harassment on a given platform, with a focus on quantifying violative content that targets each group with a breakdown on how those groups are being targeted. Audits would also allow the public to verify that the company followed through on its stated actions and to assess the effectiveness of company efforts across time. Companies should provide information from the audit and elsewhere through more robust transparency reports.

Tools and services for targets of hate

Given the prevalence of online hate and harassment, platforms should offer far more services and tools for individuals facing or fearing online attack. Facebook can develop an interstitial notification for content that AI detects has obvious hate speech between the moment someone posts content and the moment that it gets posted publicly. Users should also be allowed to flag multiple pieces of content within one report instead of having to create a new report for each piece of content being flagged. Currently, users have relive the trauma of hate speech by creating multiple reports for multiple pieces of violative content. This is unnecessary.

Facebook must develop decision-making rubrics for their content reviewers and AI tools that are tailored to the needs of different identity-based groups. Facebook has not provided civil rights groups with access to its decision-making manuals that help its content reviewers action content on the platform. Yet, we know specific types of content are left unactioned even when flagged by the community. For example, antisemitic tropes related to George Soros appear to either not violate Facebook’s Community Guidelines due to the lack of policies around these topics or Facebook does not have the correct rubrics in place to make these decisions. These rubrics should cover a comprehensive set of tropes and phrases that are used to target different identity groups. Facebook should also develop stronger community guidelines or standards that address hateful content that target marginalized and minority groups. Platforms should work regularly with civil rights organizations and civil society to map out the hate ecosystem for all identity groups and create rules and guidelines tailored to those forms of hate. Facebook’s recent announcement banning Holocaust Denial content is a step in the right direction, but there is a lot more that the company can do to combat online hate and harassment.