In Her Own Words: Confronting Charlottesville 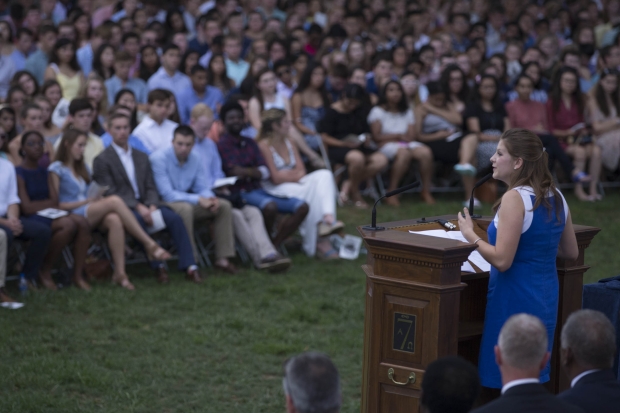 Sarah Kenny was Student Council president at the University of Virginia when the alt-right rallied at her school’s Charlottesville campus last year. She hadn’t yet returned to campus when a tiki-torch-wielding crowd of neo-Nazis and white supremacists marched through the white columns of the UVA Rotunda, spouting anti-Semitic and racist vitriol.

“I had seen something on Twitter the night before, and when I woke up the next morning, mayhem had descended,” she said. “It was a surreal experience, watching TV and seeing people punching each other on the streets I was so familiar with.”

"It didn’t seem to me like the town I knew."

Sarah spent the days that followed on the phone, trying to figure out how to respond in aftermath, navigating the media, and thinking about what she could do to prepare students returning to campus--especially new students. She rewrote her welcome address to the first-year class.

She didn’t have a playbook—she figured it out as she went along, organizing town hall meetings and fostering conversations among stakeholders. One of her biggest challenges, she said, was bringing the campus together without forcing a narrative of unity.  She signed on in support of a list of action items that students of color presented to the president of the university, including removing Confederate plaques from the rotunda. In the spring, she convened a round table to update the student body. “Emotions were still very raw,” she said.

Throughout the year, Sarah heard from other student leaders whose campuses were both targeted by white supremacist propaganda and inundated with peer-to-peer incidents of bias and hate. In November, Sarah organized student government leaders across the country to sign a statement of solidarity, rejecting hate and calling on public officials to address white supremacy. She connected with other student leaders across the country through the National Campus Leadership Council. With the “challenges of a lonely job,” Sarah says, “Andy MacCracken the Executive Director and the NCLC community provided comfort and advice through a number of trying situations as Student Council president.”

It is critical that we build community, create resources and share best practices for preventing and responding to hate incidents. ADL has partnered with NCLC to provide workshops for student government presidents nation-wide, building leadership skills for working closely with administrators and other partners on their campus to both build inclusive communities and combat bias and hate.

This year, in response to Charlottesville and the rise in hate incidents on campuses across the country, ADL also created a guide for college and university administrators. It’s called Hate/Uncycled.

Using the five-part Hate/Uncycled model, ADL partners with campuses to help them prevent and respond to hate:

All members of a campus community that values diversity, inclusion, equity and belonging can have an impact on the cycle of bias and hate at many different points. The process engages everyone from administration and student leaders to student affairs units, academic departments and human resources divisions. When school communities come together to create a foundation of trust and respect, they are more resilient to the occasional instance of hate speech. Disrupting society’s systems of inequity and bias is no easy task. Acts of outright hatred are easy to spot, but the work toward true inclusion does not stop at speaking out against overt expressions of hate.

A year after Charlottesville, Sarah’s advice to student leaders facing similar situations is to focus on building coalitions. “Engage students in creating the environment they want on their campus.”