The Historical Harm of Blackface: How to Talk with Young People 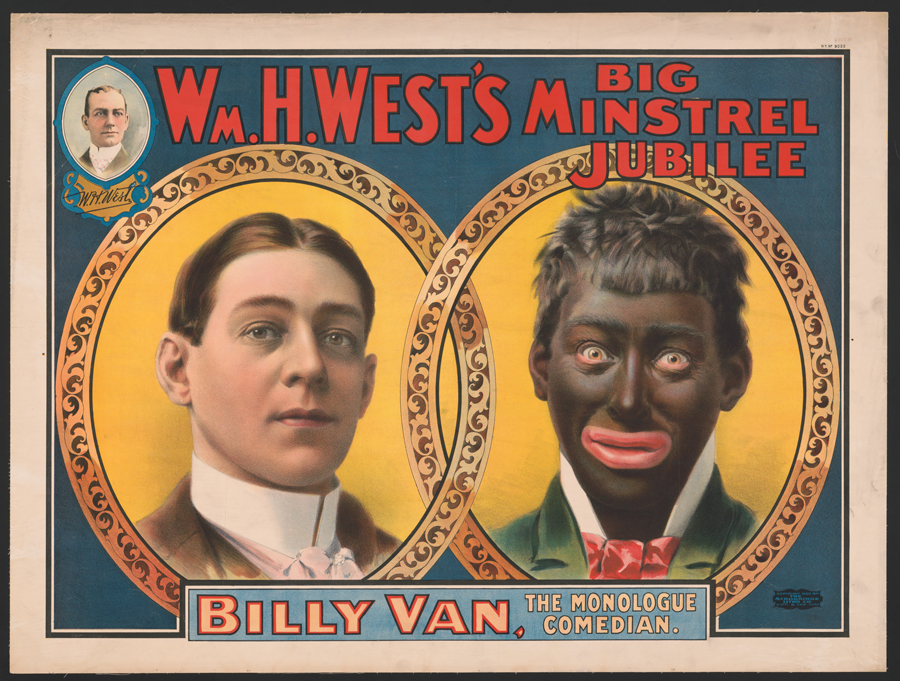 A reproduction of a 1900 William H. West minstrel show poster, originally published by the Strobridge Litho Co., showing the transformation from "white" to "black" face.

Blackface has taken center stage in our public discourse. Again.

Virginia is embroiled in a controversy based on admissions by Governor Ralph Northam and Attorney General Mark Herring to wearing blackface in the past. The list of celebrities and other public figures who publicly condone blackface is growing and there are others entering the spotlight. Just a few months ago, NBC host Megyn Kelly set off her own controversy when she defended blackface as a Halloween costume and questioned why it is considered racist. Blackface always comes up around Halloween, where we not only see ghosts and goblins come out, but stereotypes and racist costumes as well, including blackface. In a recent Pew Research poll, 34% of Americans say blackface in a Halloween costume is acceptable.

The firestorm around Northam started with his medical school yearbook. We know that wearing blackface is pervasive on college campuses, which typically appears in photos, yearbooks, in Greek life and unsurprisingly, during Halloween. Walter Kimbrough, the president of Dillard University and an expert on fraternity and sorority life said, “We haven’t been talking about it (blackface), but this hasn’t gone away. This has been happening. And there’s an incident practically every year.” In another recent poll, one in five Americans report that they have seen someone wear blackface in person.

It seems that whenever a new blackface “incident” occurs, our public conversation goes through a period of outrage and reckoning where these questions typically emerge: Should he resign? Was it wrong? Is it less wrong if the person wearing blackface dressed up as a black celebrity and is therefore ‘honoring’ them? Should the person be accountable for mistakes they made a long time ago?

These questions attempt to parse the wrongdoing without seeing the big picture. They try to assess the implications of blackface in the current reality when the damage should be measured through a historical lens. Indeed, the most salient question is: Why does this keep happening?

The answer is related to the fact that many people don’t know or understand the history. If people knew the painful and destructive history of blackface, they would realize that it was a way to exert power and control with its roots in slavery, racism and white supremacy--and they might feel compelled to stop.

The portrayal of blackface in the U.S. dates back to the 19th century, where white performers in blackface played characters that perpetuated a range of negative, belittling and demeaning stereotypes about Black people. In addition to blackface, in which actors mostly applied burnt cork or shoe polish, they wore tattered clothing to mimic and mock people who were slaves. Blackface is understood to have been created by Northern white men to entertain other white people and is the first uniquely American form of entertainment, dominating show business until the late 1890s.

Historians attribute the creation of Jim Crow to a man named Thomas Rice, who was known as the “Father of Minstrelsy.” Rice developed a Black stage character called “Jim Crow” in 1830 and claims to have drawn inspiration for his characters from observing enslaved people in the South. The name of Jim Crow was later used to refer to the racist laws and practices enforcing segregation.

There is no mistaking the fact that race was central to the initial and enduring appeal of blackface. Minstrels portrayed Black people as inferior and made a mockery of their intelligence, dialect, dancing, and features. Minstrel shows focused on the “fun and games” of slavery and downplayed the horrors of the institution. Many portrayed Black family life as a happy extension of living and working as enslaved people for their white owner.

Racist imagery, used as propaganda, served to support Jim Crow laws and customs. The images of minstrel show characters which portrayed them as lazy, easily frightened, chronically idle, inarticulate, etc. found their way into common and everyday objects such as postcards, sheet music, toys, games, household items.  For decades to come, the traces of blackface, minstrel shows and the underlying stereotypes would find their way into various elements of American society and culture.

Minstrel shows featuring performers in blackface became very popular especially after the Civil War and through the 20th century; a trend that is well documented in the National Museum of African American History and Culture. The widespread negative, demeaning and stereotypical portrayals of Black people happened during the same period when southern state legislatures passed "black codes" to restrict the behavior of former enslaved and other Black people.

After the Civil War, Black people started to perform minstrel shows themselves because it was the only way to break into the entertainment industry.  To be successful and win business from white people, they had to boast that they had “real former slaves” in their group. It is through this painful window of opportunity that black people entered into U.S. show business.

From the 1930s and into the Civil Rights movement era of the 1950s and 1960s, blackface declined. However, we can see from current day incidents that blackface is still an unfortunate practice in our society and it continues to perpetuate negative stereotypes and demeaning portrayals of Black people.

The topic of blackface is complex and should be taught in depth and with historical background. If it is not discussed in this way, the standard questions and simple analysis of blackface will dominate and not lead towards change. Here are some beginning steps to approach the topic with young people.

The well-known quote, "those who do not learn from history are doomed to repeat it” resonates deeply when it comes to the history of blackface. Let’s turn a corner this time and not just make it a teachable moment, but a history lesson as well.