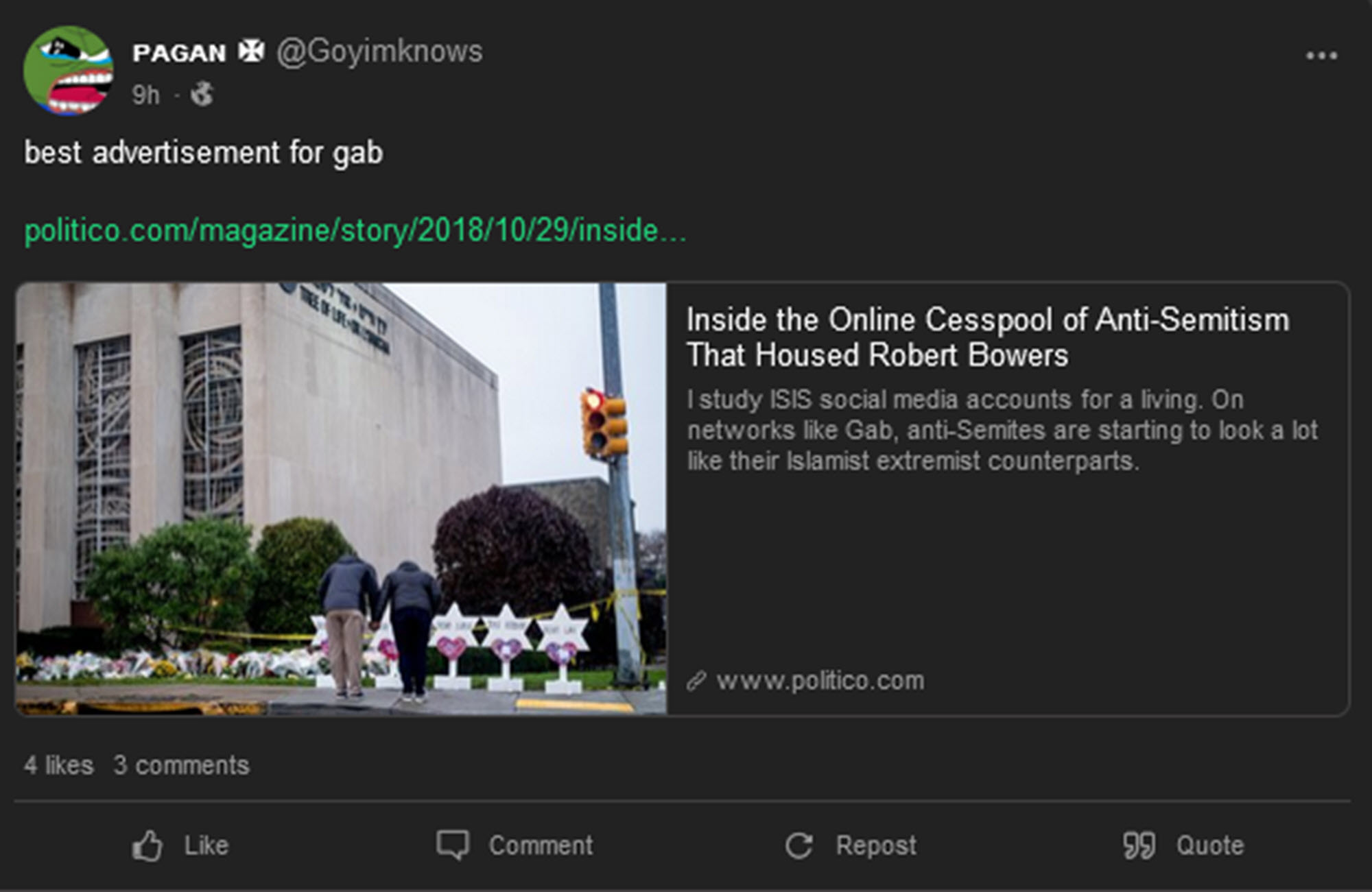 Two years ago, white supremacist Robert Bowers killed 11 people at the Tree of Life synagogue in Pittsburgh after posting antisemitic, anti-immigrant rants on Gab. Today, supported by a founder who encourages hate speech, the social media site appears to be gaining traction among right-wing extremists, including white supremacists: Sixty percent of the 47 right-wing extremist groups currently on Gab were created this year.

But the most marked change on Gab in 2020 has been the proliferation of QAnon groups.  Membership in 12 different QAnon groups on Gab exceeds 125,000 whereas in 17 white supremacist Gab groups, membership numbers are just shy of 13,000. This reflects the broad reach of QAnon, and its relatively mainstream appeal.

Neon Revolt, a hugely influential Q pundit who literally wrote the book on Q, a Gab member since February 2017, has 45,200 followers and has made more than 53,000 Gab posts. Neon Revolt’s posts are often reposted by Gab founder Andrew Torba.

Torba created the site in August 2016 because he felt conservative viewpoints were being censored on popular sites like Twitter and Facebook. Torba continues to couch the extreme posts on Gab as a freedom of speech issue.  In a June 2020 interview with Peter Brimelow, the founder of the racist anti-immigrant site VDare, Torba referred to alleged censorship on other social media sites as “tyranny” and asked why U.S. leaders are allowing it to happen.

Later in the interview, Torba argues that he personally believes that hate speech “does not exist” and is “not a real thing.” He also says that hate speech is illegal in many countries outside of the U.S., which is why he thinks Gab appeals to an international base “that comes to Gab specifically for that reason, because they can't say … these things that they're thinking about… to their family, to their friends at work… and now they can't say it online either without getting thrown in jail for posting something on Facebook or for sending a tweet.”

While Gab claims it no longer allows posts inciting violence, Torba’s philosophy and mandate regarding Gab allows a wide range of right-wing extremists to promote hatred and conspiracy theories. Over the last two months alone, Gab users have posted virulently racist and antisemitic remarks and conspiracies.

On October 22, a Gab user by the name of “Songs of the Coming World” posted a vicious racist and antisemitic meme showing a stereotypical Jewish man wearing a Mossad shirt using a Black person (seemingly a caricature of George Floyd, also depicted in a racist manner) as a bowling ball to strike a metropolis, apparently implying that Jews are to blame for the civil unrest in American cities. 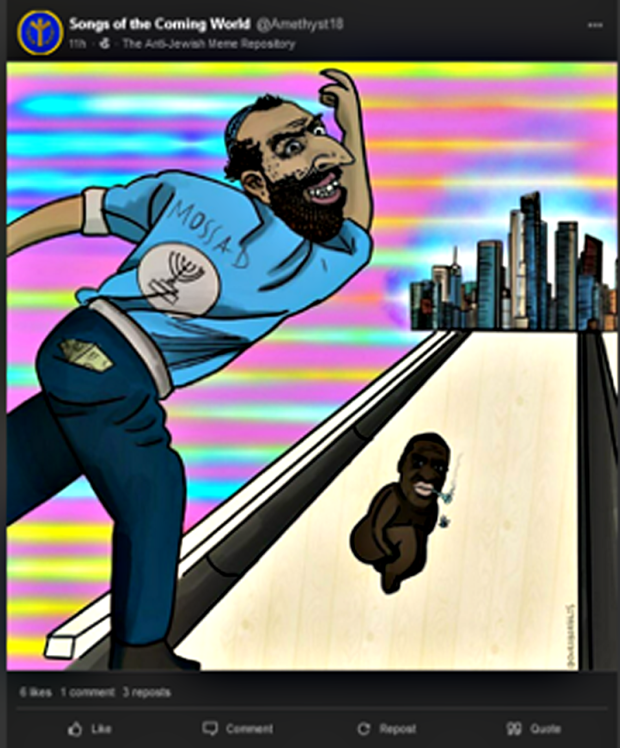 On October 23, a Gab poster referenced the Tree of Life shooting by sharing an article, “Inside the Online Cesspool of Anti-Semitism That Housed Robert Bowers,” and writing, “best advertisement for Gab.” Several days prior, the same user wrote, “sorry but the Jews and Judaism will have to be destroyed if you want to have a nation.”

These posts, while grotesque, are not isolated or unique. Thanks to a permissive founder, extremists of all stripes continue to find a home on Gab. While white supremacists and QAnon dominate the ranks of the extremist groups, there are also Gab users with anti-government views. We’ve seen ample evidence that these groups have the potential to inspire followers to deadly action.