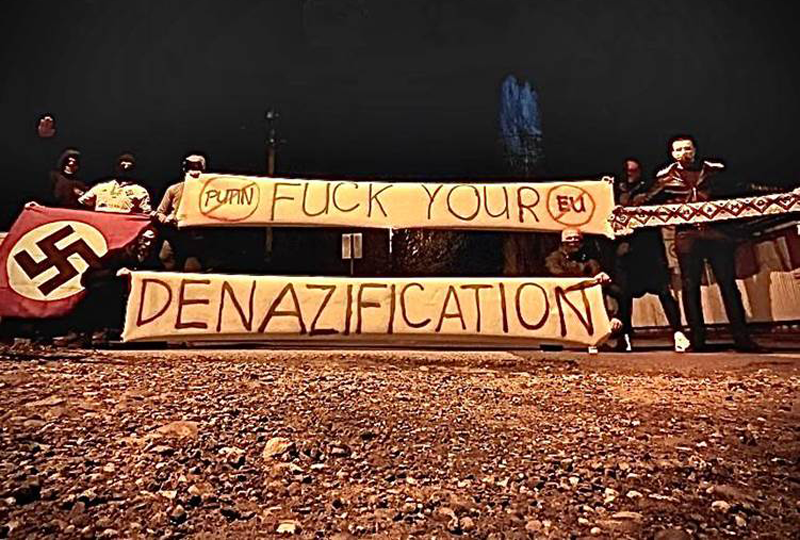 In the week since Russian President Putin declared a “special military operation” in Ukraine, the Russian leader has become a pariah among much of the global community. Even white supremacist communities, once steadfast in their support for Putin’s Russia, are now questioning whether the invasion is worth the cost in “white” lives. They are also railing against non-white refugees resettling in “white” Europe and offering support for a Ukrainian military arm with neo-Nazi ties.

Putin and his Russia have long been admired by the far right and white supremacists, thanks largely to perceptions of today’s Russia as an all-white, Christian nation. White supremacist and alt right leader Richard Spencer called Russia “the sole white power in the world.” Meanwhile, Mathew Heimbach, founder of the Traditionalist Workers Party, called Russia “The New Shining City on the Hill” and President Putin as “the leader of the free world.” Today, however, in light of Putin’s actions in Ukraine, some white supremacists are having difficulty aligning reality with their long-held beliefs.

White supremacists have expressed a range of opinions around Putin’s role in this conflict. The initial declaration of the invasion being an effort for “demilitarization and denazification” of Ukraine has caused a large backlash among neo-Nazis. The American Futurist, an accelerationist media platform, stated it does not support Putin: “So again, if you’re NS[National Socialist] and you’re supporting Putin who is literally invading a country with a listed reason of destroying NS[National Socialist] groups like Azov Battalion then your pretty fucking retarded…, ”a reference to the Ukrainian national guard unit with explicit neo-Nazi ties. Many other groups have begun referring to Putin as Jewtin, implying that he is controlled by Jewish Russian Oligarchs. One user on the Fashwave Telegram channel wrote “this invasion will result in nothing but dead Europeans at the behest of Russian jewish [sic] oligarchs.” 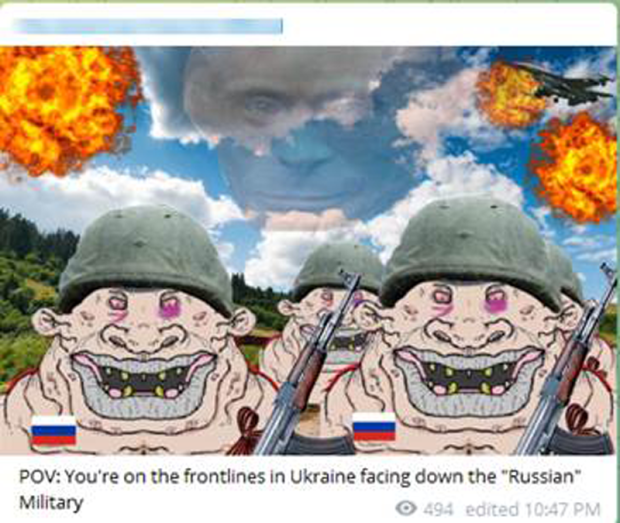 Others, meanwhile, believe that criticism of Putin is suspicious and may be coming from “the Feds.” One poster on a Telegram channel run by Milo Yiannopoulos wrote “most of these ‘Putin is a Jew’ takes come out of NatSoc [national socialist] circles that are heavily compromised by the feds.”  In some cases, support for Putin is lukewarm: “I’m not ready to say that Vladimir Putin is some really great dude but he has more reason to invade Ukraine than we did Iraq,” one post reads. Another wrote, in a response to Yiannopoulos, “I don't think Putin's our guy, but I also think he's preferable to atheist Western hegemony.” 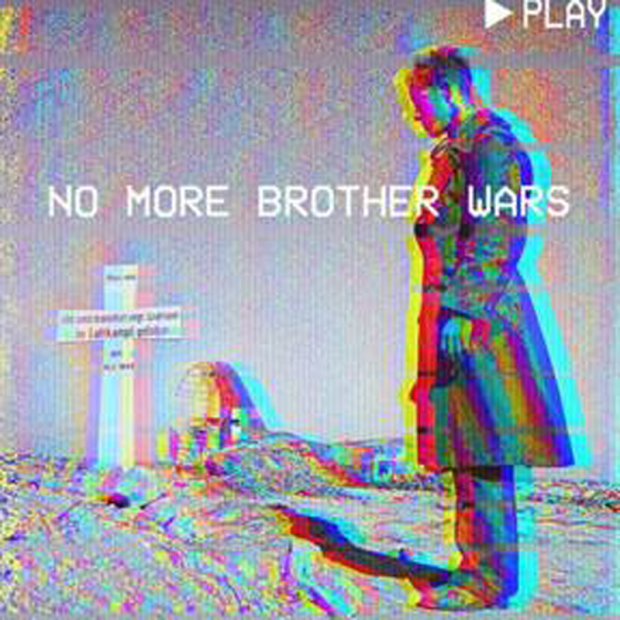 A common thread among white supremacist groups has been the notion that the current conflict is a “brother war,” and nothing can be gained from the killing of fellow white people. White Lives Matter made a statement on their official page: “End the war, call out the international clique of anti-Whites and their involvement on both sides, sentencing Whites to genocide yet again. White Racial Unity. That's it. The only take you can have as a pro-White.” White Lives Matter has been expressly against the conflict, even going as far as to liken the bombings in Kharkiv to that of Dresden in 1945. 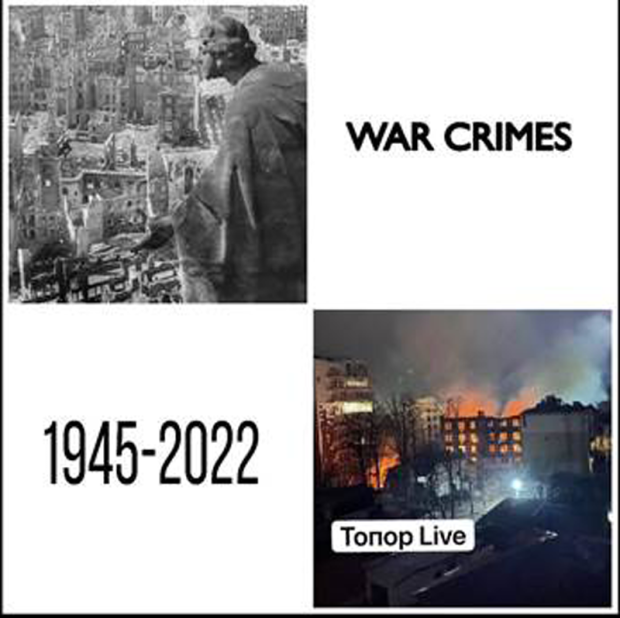 The white supremacist group Indiana Active Club posted on its Telegram channel “the Indiana Active Club extends the deepest love for our fallen brothers in the East. Whether you support the Ukrainian or the Russian side of this conflict, remember that every fallen white men (sic) is a loss to European people as a whole.”

Among the more extremist of the white supremacist movement, namely accelerationists, there has been broad support for the Azov Battalion, a Ukrainian national guard unit with explicit neo-Nazi ties. The American Futurist has even provided contact information for individuals who wish to travel to Ukraine and fight alongside Azov. Posts have also been made with crypto currency addresses for individuals to send money for Azov.

Others see Azov as a pathway to the creation of a National Socialist state in Ukraine. As a user in the Goyim Defense League chat posted, “You might be right. But if AZOV controls Ukraine, Ukraine wins and National Socialists get a victory.” In the Church of Aryanity Telegram feed, a user wrote “if they arrested there whole government and the azov battalion was leading things id join aha [all sic].”

As of March 2, 2022, the U.N. estimates nearly one million civilian refugees have fled Ukraine, most crossing into Poland. White supremacists have responded by claiming that it is not only “Ukrainians” coming into the EU but “Africans and Muslims” as well. A poster on a Telegram channel dedicated to sharing National Socialist music and content wrote “in Poland non whites used situation with open borders and sneak into the country pushed from trains Ukrainian woman and childrens [all sic].” An Instagram post shared on Telegram shows a video of a train station in Przemyśl, Poland, with the question, “Where are the Ukrainians?” – an apparent reference to the number of Black men at the station. 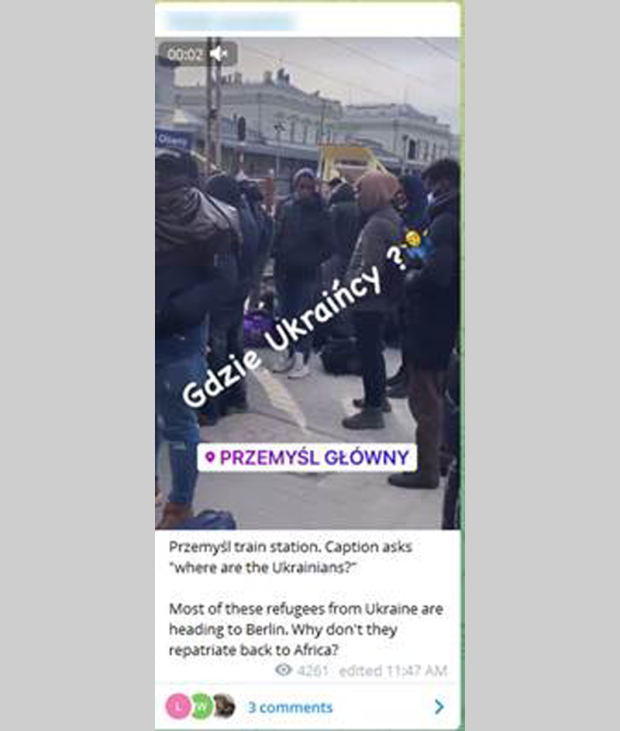 In the Telegram Channel Tolerant Fellows Hologram, a user posted “by some miracle Morgoth’s Law, that states that no matter where the conflict is in the world – the “refugees” coming to Europe will be fighting age black and brown [sic] men, is still in effect with a war in Ukraine. Fucking Ukraine, lmao.” Another example blames Putin, using antisemitic language, for the arrival of these refugees: “Thanks for the refugee crises that will negatively impact Europe & American, Jewtin.” Others claim this is part of a broader anti-white conspiracy, saying “this is all so Ukraine is swallow [sic] into the EU and destroyed by Jews with the kalergi plan,” a reference to the white supremacist and far-right conspiracy theory about Jewish plans to overwhelm white European populations with non-white “invaders.”

Multiple Islamist extremist groups are also weighing in against Putin. Members of Tahrir al-Sham, a Sunni militant group involved in the Syrian Civil War, have thrown their support behind Ukraine, demonstrating their longstanding opposition to Putin, which dates to his support for Syrian President Bashar Al-Assad in 2015. These leaders have also condemned Chechen Muslims fighters who have supported Putin in the conflict.

ISIS and Al-Qaeda, meanwhile have spoken out against supporting either side in the conflict, labeling both nations as “unbelievers” and “crusaders.” These groups instead have called on their followers to exploit the conflict and wage jihad against non-believers in the conflict zone. A post in an ISIS-run chat read “to the brothers, supporters of the Islamic State in Russia and Ukraine: Seize the opportunity, brothers, and collect weapons – for weapons have been widely distributed to civilians – then attack the crusaders.”