Words Matter: Reflecting on the 25 Years Since Yitzhak Rabin’s Assassination 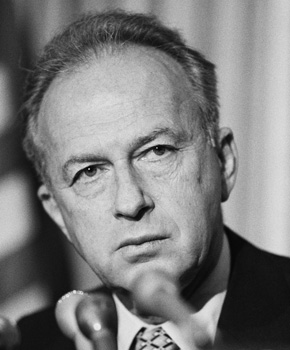 Twenty-five years have passed since the assassination of Israeli Prime Minister Yitzhak Rabin, the winner of the 1994 Nobel Peace Prize for his attempts to achieve a lasting peace with the Palestinian Authority. Inevitably, a sad milestone like this causes us to look back at that day, to assess its significance from the perspective of a quarter of a century later, and to consider continuing and relevant lessons for us going forward.

Like other major tragedies — the assassinations of John F. Kennedy and Martin Luther King Jr., and 9/11 — we all remember where we were and what we were doing when we heard the news.

ADL was in Chicago for a meeting of our national commission and when the first reports of the shooting came in, the meeting was immediately suspended, and our top leadership started planning about how to get to Israel quickly to attend the funeral.

That Saturday night, November 4, 1995, Rabin appeared at a large peace rally in Tel Aviv, joining the singing of “Shir L’Shalom” (Song for Peace). Minutes later, as he was leaving the rally, an Israeli Jewish extremist, Yigal Amir, shot Rabin as he was approaching his car. Less than an hour later, Rabin was pronounced dead at a Tel Aviv-area hospital. Fueled by extremist views, and an incendiary environment fed by opponents of the Oslo process, Amir claimed his actions were justified because Prime Minister Rabin had “betrayed” the Jewish people by making peace with the Palestinians.

One of the early thoughts when word came in that the assassin was a Jewish Israeli was the recognition of how absurd was the illusion that existed in many circles that an Israeli Jew could never commit such a crime. Yes, an Arab terrorist, possibly. But a Jew; never. Such thinking never made sense since it is self-evident that extremism can exist in any community, but now this shocking event exposed how dangerous it was to think that way.

What was clear even before the assassination, something that ADL called out, was that words matter. The verbal assaults against the prime minister for his signing the Oslo Accords with Yasser Arafat, terms being used such as traitor, Nazi, rodef, were dangerous and we warned, repeatedly and urgently, could lead to violence.

And all these years later, that theme has never been more relevant. A survey released just this week found that nearly half of Israelis (45 percent) believe another assassination for political ends is possible due to incitement.

One of the most important moments in the difficult period following the murder of the Israeli prime minister was a New York memorial service of religious Zionists 30 days later. The late Rabbi Norman Lamm, then president of Yeshiva University, addressed a large gathering at an Upper East Side Orthodox synagogue. Courageously, he said at one point in referring to Amir, the assassin who had been raised in modern, Zionist yeshivas in Israel, “He was a weed, but he was a weed in our garden.”

I have quoted that line many times in the years since and it is more important than ever now in the United States where partisanship is everywhere. The true test of a willingness to stand up to hate is whether someone is ready to condemn it when it comes from one’s own community, one’s own ideology, one’s own party. It is easy to see the other to blame, harder to look at oneself.

Rabbi Lamm’s message was, don’t blame an entire community for Amir’s horrible actions, but also don’t ignore the rhetoric and attitudes within the community that provided fertile soil for this evil.

The sudden death of Rabin at a time of great division in Israel, but also one of hope for peace with the Palestinians raised the question of the impact of that tragedy on chances for peace. Today, with nothing happening on the peace front with the Palestinians for years, the obvious question is: would things have been different had Rabin lived?

Clearly, there was a momentum toward peace that was interrupted by the assassination. Remember, the assassination took place after a massive rally for peace in Tel Aviv. And Rabin’s combination of being a tough military guy with being a peacemaker offered something unique.

On the other hand, there have been numerous opportunities to follow the path of Rabin toward an expanded and real peace — at Camp David in 2000, in the disengagement from Gaza in 2005, at Annapolis in 2007 — without any real reciprocation from the Palestinians that would have led to Israel and an independent Palestinian state living side by side in peace and security.

One can never arrive at a clear answer to the hypothetical question. But simplistic answers don’t help.

As much as the assassination was a huge national tragedy for the state and people of Israel and for Jews worldwide, 25 years later, we must still remember this, as well as the tragedy it was for the man and his family. The prime minister had had an illustrious career as a soldier, a military leader, a diplomat and leader of the nation.

In many circles, Rabin was depicted as having gone through a transformation from a military man to a peacemaker. I never bought that categorization and I said so at several memorial services where I spoke at the time.

He was one man, a true patriot always thinking about what was best for his nation and how he could best contribute to its well-being. Early on, when Israel was under siege, his contribution was to lead the way in protecting the nation from its enemies. But when things started to change and Israel became more secure, protecting the best interests of the nation took the form of seeking a viable and secure peace with the Palestinians. No contradictions there.

Let us not forget him.