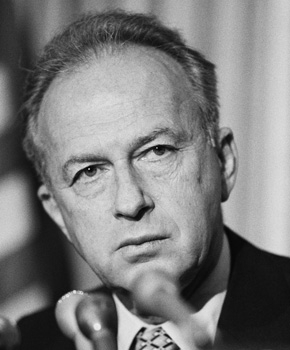 Yitzhak Rabin was an Israeli Prime Minister and winner of the 1994 Nobel Peace Prize for his attempts to achieve a lasting peace with the Palestinian Authority. Born in Jerusalem on March 1, 1922, Rabin started his Israeli military career as a volunteer, and would go on to serve a distinguished 27-year career in the armed services, culminating his career as Chief of Staff in the Israel Defense Forces. Following his retirement from the army, he was appointed Israeli Ambassador to the United States. Returning to Israel in 1973, Rabin became active in the Labor Party and was elected Prime Minister in 1974. He served two terms in office, from 1974-77 and from 1992 until his assassination in 1995. Rabin was the first native-born Prime Minister of Israel.

In 1993, the world was surprised by news that Israel and its long-time adversary, the Palestinian Liberation Organization (PLO), had been engaged in secret negotiations in Norway. On September 13, 1993, Rabin joined PLO leader Yasir Arafat and President Bill Clinton on the White House Lawn to sign the launch of a historic Israeli-Palestinian peace process, the so-called "Oslo Process." The PLO agreed to end terrorism and recognize Israel's right to exist. Israel recognized the PLO as the representative of the Palestinian people. Rabin, who had spent much of his life as a military defender of Israel's security, became a committed advocate for Israeli-Palestinian reconciliation. In 1994, Rabin was awarded the Nobel Peace Prize together with then-Foreign Minister Shimon Peres and Yasir Arafat.

On November 4, 1995, Rabin appeared at a large peace rally in Tel Aviv, joining the singing of "Shir L'Shalom" (Song for Peace). Minutes later, as he was leaving the rally, an Israeli Jewish extremist, Yigal Amir, jumped out of the crowd and shot Rabin. Less than an hour later, Rabin was pronounced dead at a Tel Aviv-area hospital. Fueled by extremist views, Amir claimed his actions were justified because Prime Minister Rabin had "betrayed" the Jewish people by making peace with the Palestinians.

Rabin was mourned by millions of people around the globe. At his funeral, President Bill Clinton delivered one of the eulogies, ending with the Hebrew words "shalom, chaver" (goodbye, friend). Yitzhak Rabin was a champion for peace and remains a symbol for hope, peace and partnership.