Overview: While some in Los Angeles’ Jewish community were significantly impacted by the looting in late May, a number of the claims of targeted antisemitic violence have been exaggerated or misrepresented. There is no indication that Jewish businesses or institutions were broadly targeted for vandalism, and calling the events pogroms is inaccurate and offensive.

Description: On the last weekend in May, some of the peaceful protests in Los Angeles, spurred by the murder of George Floyd, devolved into looting and property destruction. One area particularly impacted by looting was the Fairfax District, a historically Jewish neighborhood in Central Los Angeles. ADL strongly condemned these acts of vandalism and antisemitism, which included graffiti at Congregation Beth Israel and damage to a number of Jewish-owned businesses. However, in the days and weeks following the looting, some of the descriptions of the vandalism morphed into exaggerated or misleading allegations of targeted antisemitic violence, which in turn spread unnecessary fears online and within communities.

FrontPage Mag, a right wing conspiratorial and Islamophobic online magazine published by the David Horowitz Freedom Center, posted an article on June 19 with the inflammatory headline: “A Farrakhan Supporter Led the LA Black Lives Matter Rally That Became a Pogrom.” On June 26, Israel Hayom posted an article that repeatedly labeled the looting of Jewish properties in Los Angeles as the “Shavuot pogrom,” a reference to the Jewish holiday of Shavuot which coincided with the dates of the looting in late May. A rabbi quoted in the FrontPage Mag article described the protests as “Kristallnacht all over again.” This characterization of the protests also appeared in an email which quickly spread through the local Jewish community with the hyperbolic subject line: “KRISTALLNACHT 2020 – DOES ANYONE CARE?”

While Jewish businesses and synagogues were certainly among the properties damaged by the widespread looting in Los Angeles at the end of May, equating these incidents with pogroms or Kristallnacht is both inaccurate and offensive. A pogrom is an organized massacre of a targeted group of people, as occurred in Nazi Germany on Kristallnacht, when close to 100 Jews were murdered and thousands of Jewish businesses and hundreds of synagogues were destroyed. Using these terms in the context of Los Angeles trivializes real pogroms. Further, it irresponsibly engenders fear and division within a Jewish population already concerned about record-setting levels of antisemitic incidents in recent years.

Some of the vandalism documented during the looting in Los Angeles did include or express antisemitic or anti-Israel animus. In other cases, however, supposed examples of graffiti targeting Jews or Jewish institutions were either misidentified or misleading. StopAntisemitism.org falsely reported that graffiti in Beverly Hills read "KILL THE JEW," when it actually said "KILL THE RICH." Although the group posted a correction the next day, it did not delete the original post, which had already been shared hundreds of times. In an article disproving exaggerated claims about antisemitic violence during the Black Lives Matter protests, The Forward included an undated photograph of Los Angeles’ Baba Sale Congregation, defaced with “Free Palestine” graffiti. The image, which was also shared by social media users in the context of the protests, was actually from an unrelated September 2019 vandalism incident at the synagogue. Baba Sale was spray-painted with graffiti again during the May 2020 protests, however, the messages were mostly anti-police and pro-BLM in nature. A Haaretz article about the impact of the Los Angeles protests on the Jewish community included a photograph of a protester standing in front of a raging fire, which some readers misinterpreted and shared on social media as evidence of a burning synagogue. 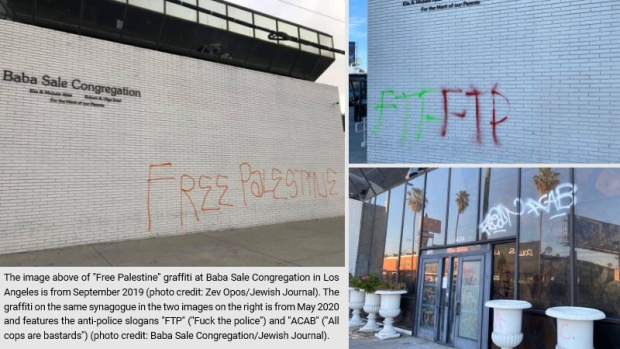