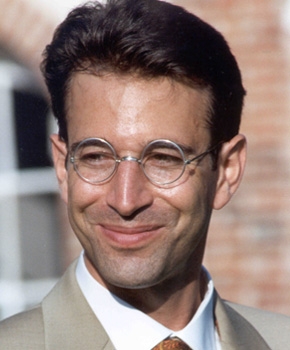 The world has come to know Daniel Pearl as the Wall Street Journal reporter who was kidnapped and murdered by terrorists in Pakistan in early 2002, just four months after 9/11. Since then, he has been remembered as a symbol of hope: a man who built bridges between diverse cultures as a writer and a musician.

Pearl was born in Princeton, New Jersey, and grew up in Los Angeles, California where he demonstrated an insatiable curiosity for music, academics and sports. A gifted writer from a very young age, Pearl's aptitude for journalism became apparent as a student at Stanford University where he co-founded the student newspaper Stanford Commentary. After graduating, he wrote for regional papers before joining The Wall Street Journal in 1990.

In October of 2000, Pearl and his wife moved to Bombay, India where he became the South Asia Bureau Chief for The Wall Street Journal. From Bombay, Pearl covered many issues, including the "war on terrorism," occasionally venturing to Pakistan. He was retracing the steps of "shoe bomber" Richard Reid and hoped to meet with Sheik Gilani, a spiritual leader, when he was abducted in Karachi on January 23, 2002. For weeks, millions of people around the world—from heads of state to religious leaders and ordinary individuals—rallied for Pearl’s release. Several weeks elapsed without word of his fate, until the unthinkable reality became clear. Pearl's captors beheaded him and posted the video on the Internet. In his final words, Pearl declared "My father is Jewish, my mother is Jewish, I am Jewish." His tragic murder was confirmed on February 21, 2002.

Two days before his abduction, Pearl learned that his wife, Mariane, was expecting a baby boy; he chose the name Adam for their son. In May, three months after his murder, Mariane gave birth to Adam.

Pearl's family and friends established the Daniel Pearl Foundation to carry on his legacy, using journalism, music and dialogue to address the root causes of the hatred that took his life.