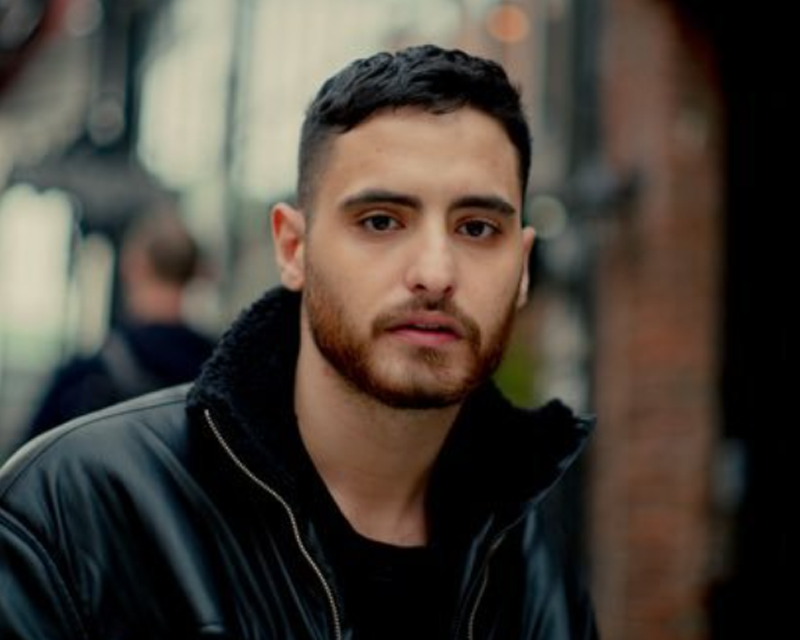 Mohammed El-Kurd is a prominent Palestinian activist who was hired in 2021 as the Palestine Correspondent by the left-wing magazine The Nation in 2021. He has published articles and been interviewed in a wide array of media. Unfortunately, even a cursory analysis of his social media and his book “Rifqa,” reveals an indisputably troubling pattern of rhetoric and slander that ranges far beyond reasoned criticism of Israel. It is unvarnished, vicious antisemitism. El-Kurd has accused Israelis of eating the organs of Palestinians and of having a particular lust for Palestinian blood. He has compared Israelis to Nazis, negated the historic Jewish connection to the Land of Israel, and vilified Zionism and Zionists.

To be sure, the Israeli-Palestinian conflict is intensely personal for El-Kurd. As residents of the volatile East Jerusalem neighborhood of Sheikh Jarrah, he and his family have been entangled in a long-standing political and property dispute that has left them under threat of eviction by Israel for years. Nevertheless, his willingness to employ these tropes raises serious concerns. His wholesale demonization of Zionism and Zionists, especially using language historically wielded against Jewish communities, may be seen as a rhetorical attack on a majority of Jews worldwide who feel attached to Israel or who view a positive relationship with Israel as an inherent part of their Jewish identities.

Playing into “blood libel” trope; demonization of Zionism and Zionists

On a few occasions, El-Kurd has alleged that Jewish Israelis and Zionists eat the organs of Palestinians or have an inherent bloodthirstiness. In Rifqa, he writes: “they [Israelis] harvest organs of the martyred [Palestinians], feed their warriors our own.” In May 2021, El-Kurd tweeted that Zionists have an “unquenchable thirst for Palestinian blood.” In June 2021 he claimed that Zionism is inherently linked to “blood thirsty[sic] and violent” actions.

In at least two instances, in apparent attempts at criticizing alleged Israeli actions, El-Kurd has labelled Zionism a “death cult.” In September 2021, he made this sweeping accusation as he alleged a video showed Israeli soldiers “stepping on” a deceased Palestinian man. In July 2021, El-Kurd directly defended calling Zionism a “death cult,” tweeting that such a designation “...should not spark outrage. What should is the fact of a Zionist killing a Palestinian every three days. Enough.”

In his effort to underscore his disgust with and opposition to Israel, El-Kurd has employed perhaps the most potent comparison available today, equating Israelis with Nazis. Aside from being inaccurate, this language is extremely offensive, trivializes the Holocaust and plays into the demonization of Jews. On June 21, 2021 he claimed that “Zionist settlers” were “starting fires all over Sheikh Jarrah” and continued: “These are the sadistic barbaric neonazi [sic] pigs that claim to be indigenous to our land.” On May 12, 2021 he tweeted: “I don’t care who this offends they have completely internalized the ways of the nazis.” On that same day, El-Kurd used Holocaust terminology to implicate a non-Israeli Jewish person in the alleged actions of Israel: 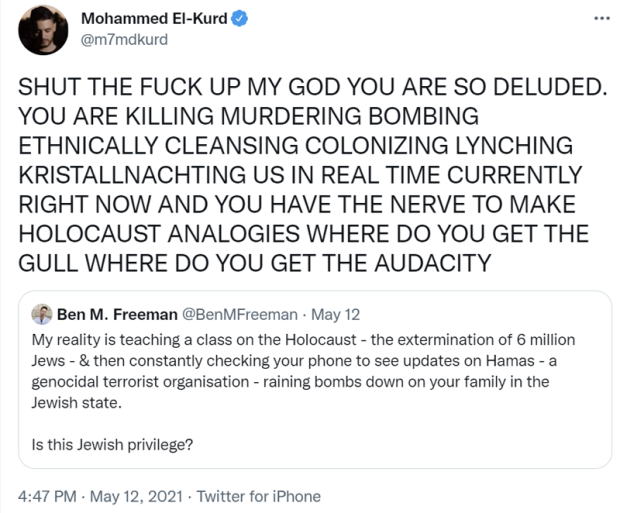 Denying Jewish Indigeneity/Connection to the Land of Israel

In a number of instances, El-Kurd has negated the historic connection of the Jewish people to the Land of Israel. In June 2021, he called such a connection “fictional indigenity[sic]” as he criticized a far-right Israeli march and other Israeli actions in Jerusalem. In at least two instances, he has dismissed the Jewish people’s link to the Land of Israel by commenting on the physical traits of Israeli Jews. In February 2021, he tweeted: “How are Israelis gonna say they’re indigenous to Palestine but can’t walk outside without getting sunburned? :/.” He posted in a similar manner in March 2021: 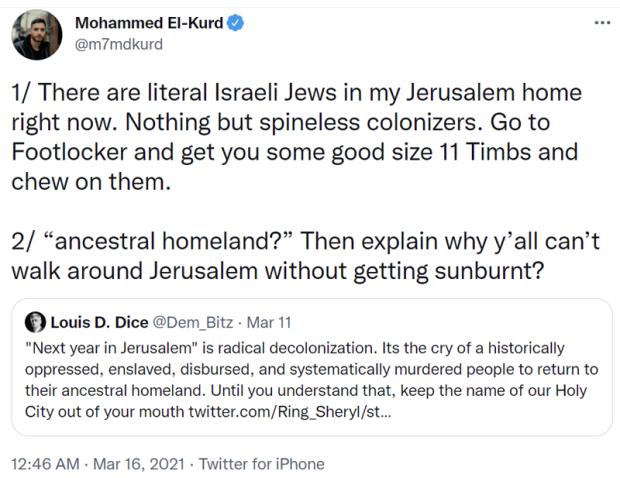