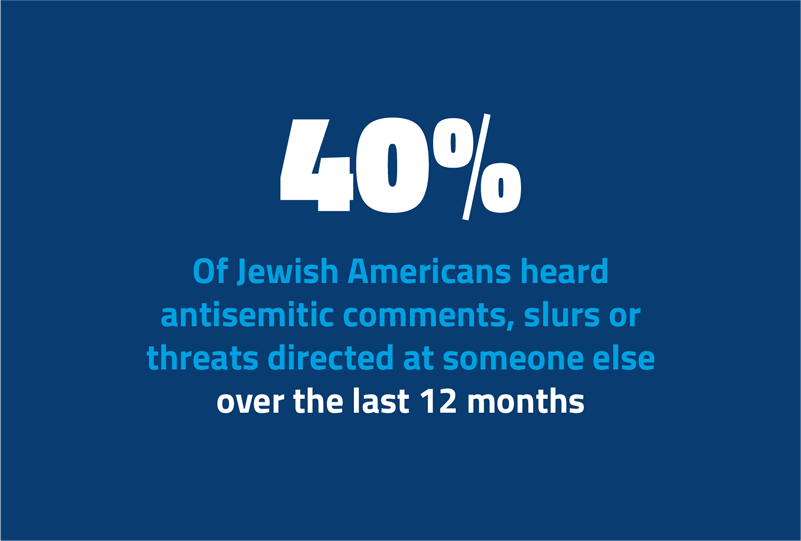 More Than Half of Jewish Americans Have Experienced Antisemitism in Past Five Years, ADL Survey Finds

The American Jewish community continues to face significant fear and anxiety from the threat of antisemitic or other hateful attacks and harassment. Following up on our 2020 survey results, we asked Jewish Americans to tell us about their experiences online and off with antisemitism. Their responses indicate that antisemitism still is very much a part of Jewish Americans’ lives. 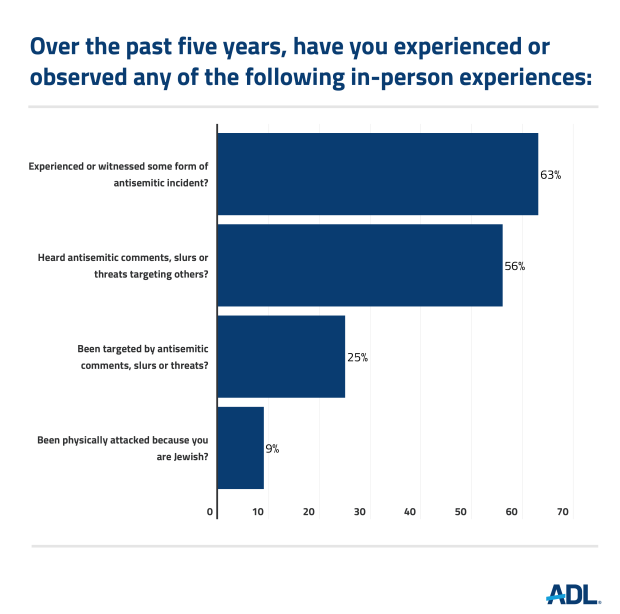 Well over half (63 percent) of Jews in America have either experienced or witnessed some form of antisemitism in the last five years. Even given the poll result’s four percent margin of error, that’s a notable increase from 2020’s total of 54 percent. More than half (56 percent) of American Jews have heard antisemitic comments, slurs or threats targeting others in the past five years, and one in four Jewish Americans (25 percent) say they have been targeted by antisemitic comments, slurs or threats during the same time frame. Especially alarmingly, nine percent say they have been physically attacked in the last five years because they are Jewish. These numbers are all slightly up from 2020, but still within the range of the margin of statistical error (+/- 4.4 percent).

While the 2020 survey did not ask about more recent incidents, this year, we asked participants to answer questions based on their experiences over the last 12 months. The most notable (and by far the highest) number from that sample: Forty percent say they heard antisemitic comments, slurs or threats directed at someone else.

Concerns About the Community

More than half (59 percent) of Jewish Americans polled said they feel Jews are less safe in the U.S. today than they were a decade ago.

Slightly fewer respondents reported being afraid of a violent attack at a synagogue (49 percent in 2021, versus 55 percent in 2020). There was also a very slight drop (within the margin of statistical error) from 2020 to 2021 in reported concern about various threats to the Jewish community, including verbal harassment, physical attacks and the defacement of synagogues or other Jewish institutions.

These concerns are significant enough to affect the daily behaviors of many respondents, at levels similar to last year’s results. Asked whether they have taken specific steps to guard against violence or harassment against Jews, six percent said they have avoided Jewish institutions, including synagogues or Jewish events, and 13 percent said they have avoided identifying themselves as Jewish on social media. The overall number of people who took at least one protective measure was 32 percent, compared to 27 percent in 2020.

This level of anxiety and fear comes at a cost, as does targeted online harassment. As was also the case in 2020, one in three (33 percent) Jewish Americans who have been harassed report having trouble sleeping. Sixteen percent said they had been impacted financially by the harassment.

Fewer respondents report contacting online platforms with their concerns – 29 percent in 2021, down significantly from 43 percent in 2020. This may reflect some resignation vis a vis tech companies’ perceived lack of responsiveness to complaints about online bigotry and hate (which is also reflected in the general population survey response in ADL’s “Online Hate and Harassment” report).

The survey was conducted by YouGov, a leading public opinion and data analytics firm, on behalf of ADL, examining Jewish Americans’ experiences with antisemitism both online and offline. The survey of Jewish American adults over the age of 18 was conducted from January 7-15, 2021. A total of 503 responses were collected from Jewish Americans, 18 and older, and weighted to reflect the demographic makeup of Jewish people across the United States, according to Pew Research Center. Participants are rewarded for general participation in YouGov surveys but were not directly rewarded by ADL for their participation in this survey. The margin of sampling error for the full sample of respondents is plus or minus 4.4 percentage points.

ADL gratefully acknowledges The ADL Lewy Family Institute for Combating Antisemitism and for its sustained support and commitment to fighting antisemitism.

ADL also thanks its individual, corporate and foundation advocates and contributors, whose vote of confidence in our work provides the resources for our research, analysis and programs fighting antisemitism and hate in the United States and around the globe.