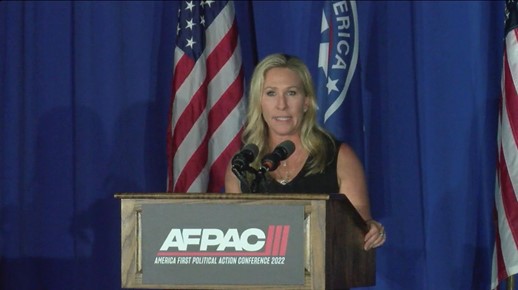 The America First Political Action Conference (AFPAC III) was held on February 25, 2022, in Orlando, Florida. This annual white supremacist event is purposely held in Orlando to coincide with the Conservative Political Action Conference (CPAC) event taking place nearby. This year, nine individuals, including white supremacists, media personalities and political figures spoke at the conference (three of these speakers spoke virtually through pre-recorded videos).

White supremacist Nicholas Fuentes, who founded AFPAC in 2020, claimed that 1,200 individuals attended the conference, and more than 10,000 viewers watched the conference stream live from Cozy.tv, Fuentes “uncensorable” livestreaming platform. Various “special guests” were also in attendance, including white supremacists Jared Taylor and Peter Brimelow. For a full description of all speakers and notable attendees, please visit our previous blog on this event. 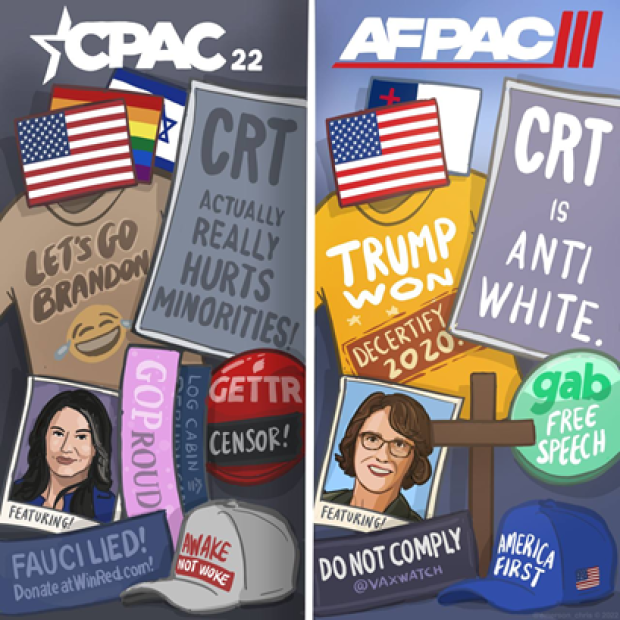 Georgia Rep. Marjorie Taylor Greene, announced as one of the two “mystery speakers” at AFPAC, used her time to applaud Fuentes’ group for their work, calling them “cancelled Americans,” and stating, “I don’t believe anyone should be cancelled…But that’s what the Democrats believe in because that’s what Marxism is. That’s what communism is.”

Greene went on to speak of the troubles targeting the youths in America, likely appealing to the young demographic of Groypers present at the conference. “The youth are tasked with upholding and fighting for the Constitution and stopping the communist party of the United States of America.”

When a reporter later questioned Greene about why she attended a white nationalist conference, she claimed to not know who Nick Fuentes is.

White supremacist James discredited Black Lives Matter (BLM) and portrayed Black Americans as an inherently violent group of people, stating that the U.S. criminal justice system is not broken but that the “minority population might just so happen to commit the majority of crimes.” He referenced how other “developed nations” have lower crime rates than the United States because they “don’t have most of the people [POC] that commit the crimes here.” The audience applauded this observation by chanting, “lock them up.”

James went on to say, “We will no longer be hypnotized by talks of slavery or genocides that happened 100 years ago.... Just because [POC] are arrested & imprisoned at higher rates... doesn’t mean the criminal justice system is racist... [POC may just] commit the majority of crime."

James referenced Great Replacement tropes heavily in his speech, asserting that the American people are being replaced by those who advocate for the deconstruction of “whiteness” and wish to “dismantle the very culture that made this country the most prosperous on this planet.” He said, “You shouldn’t be mad about how they are defining your culture. You should be furious about the fact they are trying to replace it.” He also referred to “anti-white propaganda” as a “declaration of war.”

Far-right conspiracy theorist Stew Peters’ speech focused on the “war of good versus evil” against the “deep state cabal,” stating, “The left isn’t even relevant anymore, the uniparty globalist sell-out satanist [referencing the GOP] want to sell your kids and lock up white people forever…We are in a biological war.”

Peters ended with a focus on real-world activism, dissuading listeners from staying behind their keyboards and instead, “You need to deploy. You need to activate in your city, in your state, and in your county.” He highlighted that America’s enemy is “Satan himself,” who is “flooding our schools with blood libel against white people” and allowing an “Islamic insurgency” in Minneapolis, and in which Tony Fauci serves as “Satan’s minion.” Peters asked why Dr. Fauci isn’t “hanging by the end of a noose somewhere?” The crowd responded by chanting “Hang him up! Hang him up!” 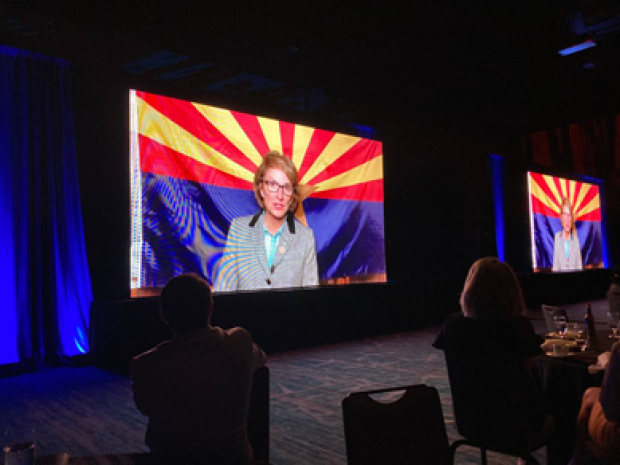 Arizona State Senator Rogers sent a pre-recorded video, largely pandering to the groypers, stating, “I say groyper and they [the media] go absolutely nuts.” She thanked Fuentes for giving patriotic Christian Americans another platform “where we can be heard,” referring to AFPAC, and praised Fuentes for being “the most persecuted man in America,” applauding him for the creation of Cozy.tv. She also said, “I’m so appreciated how you [Fuentes] never gives up. We need more strong Americans like you who refuse to back down.” Rogers ended with, “Keep doing what you're doing…You and your fellow patriots are the future.”

Andrew Torba, CEO of Gab, spoke almost exclusively on Christian themes and the battle of “good versus evil,” stating “America is a Christian nation” and in need of a “great restoration.” Torba also made a reference to the “Synagogue of Satan,” which is often an antisemitic reference to Jews. He said, “Tolerance is not a Christian virtue. God has zero tolerance…We are made to hate what is evil…Without hatred, we cannot understand love. Yes, I am hateful. I hate evil. I hate Satan. And I hate the antichrist...God has zero tolerance with regards to sin...God Rebukes the Synagogue of Satan.” Torba added, “If you don’t have a sword, then sell your cloak and buy one,” hinting that it is time for the American people to rise up in force “in the face of evil.”

Jesse Lee Peterson, a Black pastor and radio show host, ended up giving one of the most racist speeches of the evening, talking about how whites built the country and that Blacks are destroying what whites have created. For example, Peterson stated, “I may not know your country, but I know Black people, and their hearts are filled with evil.”

Peterson also said, “White people are the most attacked people on this side of heaven today…They accuse white people of everything.” He added, “White people built America with the help of god…If Black people are smart enough to build a country, why don’t they build Africa?” Part of his speech focused on his belief in the creation of a “White History Month,” which he believes should take place in July, since “If it wasn’t for White history, there wouldn’t be no America.”

Janice McGeachin, the Lieutenant Governor of Idaho, sent a pre-recorded video where she congratulated the groypers on three years of AFPAC, saying, “Keep up your good work fighting for our country.” McGeachin also discussed her anti-masking and anti-vaccine policies around COVID-19.

Former Arizona sheriff and anti-immigrant ideologue Arpaio touched on a variety of topics, including the conspiracy about former President Barack Obama’s fake birth certificate. He also stated, “I have the reputation of being the biggest racist in the country.” This statement was met by huge applause from the audience. Arpaio seemed taken back, saying, “What are you clapping for? I'm not.”

Fuentes celebrated and praised the January 6, 2021, attack on the Capitol, stating, “2021 began with the historic Patriot Day, as I call it.” He went on to state that it was one of the proudest days of his life: “Just in case they are listening, this is for the FBI, the CIA…I’ll reiterate it just for you. January 6 was awesome…I was proud to be an American on January 6… It was nice to see the people occupy the Capitol for once.”

Fuentes spoke of the need to separate America from the American regime. “The deep state has taken complete unregulated control of the U.S. government…Let’s face it, the U.S. government has become the evil empire in the world. The U.S. government has become the great Satan.” As he did in 2021, Fuentes claimed that his group is looking across the country at different midterm Congressional races and is going to be "deploying hundreds of political operatives across the country" to support those that are truly "America First." 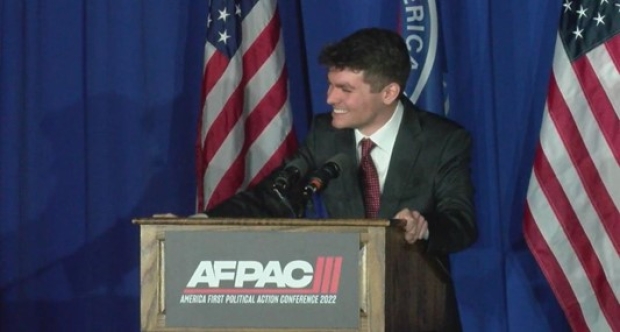 Fuentes ended on an aggressive note, stating, “To the people that have thrown out and disrupted our country. We are coming for you. Your days in power are numbered. You think you can replace us? You are wrong. We will replace you!...We are willing, ultimately, to die for our cause…And I don’t say that glibly, I am willing to die for this cause.” He added, “Do you want to know our secret? Our secret sauce? It is these young. white. men.”

Also of note, Fuentes solicited a round of applause for Russia in its invasion of Ukraine, and the crowd chanted “Putin, Putin.” In another moment, Fuentes stated, “They say Vladimir Putin is Hitler!,” which was met by the crowd yelling, “LETS GOOOOO!”