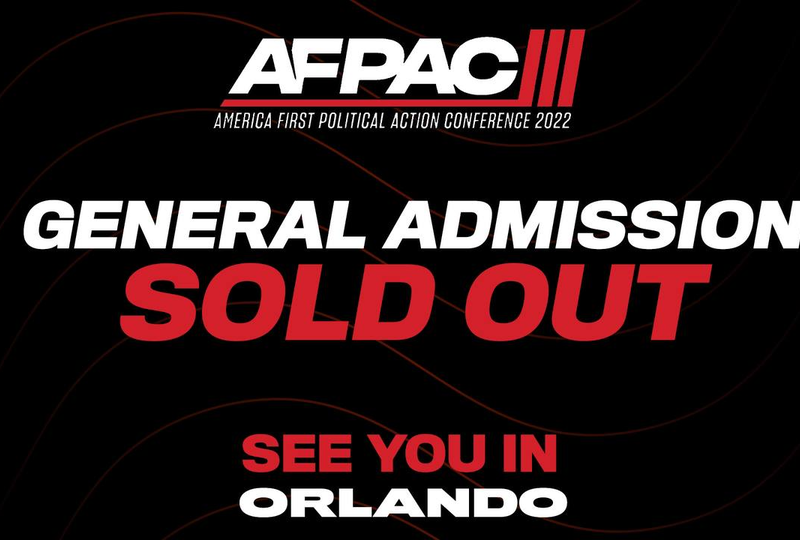 Fuentes’ third AFPAC conference will not only bring together the Groypers, followers and supporters of Fuentes, but also many different strands of the far right, including white supremacists; anti-immigrant ideologues; media personalities and political figures, some of whom are running for office this year (see below for more information).

AFPAC demonstrates the increasing acceptance of extreme views by those who once identified with the conservative movement. This is exemplified by bringing together political figures like Steve King (a former Congressman), media personalities like Jon Miller (a Black journalist) and Patrick Howley (a writer for numerous right-wing publications), who claim to be conservatives, with individuals like Jared Taylor, Tim Gionet, aka Baked Alaska, and Vincent James, who blatantly promote white nationalism.

In the past, Michelle Malkin, a far-right pundit and anti-immigrant ideologue, and Miller were both speakers at CPAC (2019 and 2020, respectively). CPAC is sponsored each year by the right-wing American Conservative Union and draws in aspiring politicians. Figures like Malkin and Miller have been able to move between right-wing and extremist circles because there are few consequences for them politically to do so.  While many of the speakers at the AFPAC conference, including King, Malkin, Florida Congressional candidate Laura Loomer and Arizona State Rep. Wendy Rogers, represent the fringe part of the conservative movement, they no longer fear being shunned by their more mainstream counterparts.

It is noteworthy that speakers at AFPAC like Malkin and Rogers don’t acknowledge that Fuentes is a white supremacist. They see him as a Christian conservative and the new face of the conservative movement. Malkin has praised Fuentes and the Groypers as “patriotic conservatives.” She also called Fuentes one of the “New Right leaders.”  Rogers has repeatedly praised Fuentes on social media posts and lauded him as a champion of free speech on Gab.

Non-white right-wing figures speaking at AFPAC III, such as Jon Miller and Jesse Lee Peterson, a Black minister and radio host, also don’t seem to view Fuentes as a white supremacist. For them, the “culture war” in America, the subject of an interview Peterson did with Fuentes on his radio show in 2019, is apparently of more concern than Fuentes’ extreme views on Blacks and Jews. At last year’s CPAC conference, Miller said he chose to go to AFPAC over CPAC because he felt that Fuentes’ America First views were more akin to his own. They are following in the footsteps of Malkin, a Filipino-American, who embraced Fuentes and the Groypers early on and spoke at the two previous AFPAC conferences. She is slated to speak this year as well.

Since the event features non-white speakers, Fuentes and his supporters have “plausible deniability” when identified as white supremacists, while increasingly advancing towards the normalization of extremism. 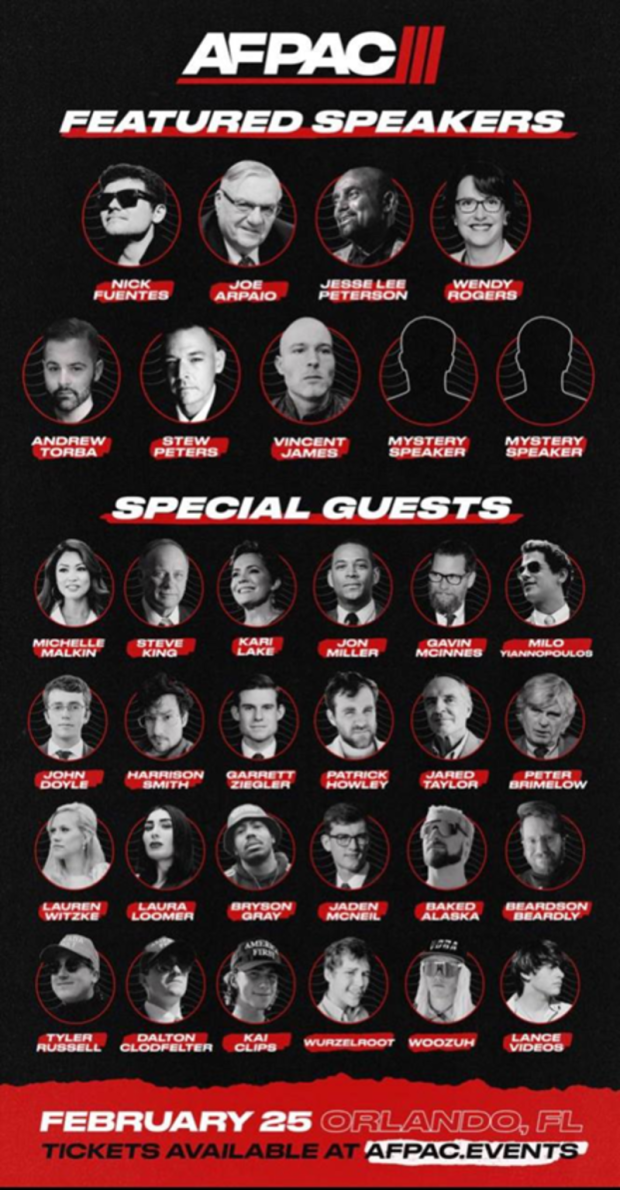 Below are descriptions of the speakers who are scheduled to attend AFPAC III.

Fuentes is a white supremacist leader and organizer. He first gained widespread notoriety in 2017 with his livestream “America First with Nicholas J. Fuentes.”  Fuentes refers to his supporters as “Groypers,” who see their bigoted views as necessary for preserving white, European-American identity and culture.

A Groyper and alt right live streamer, McNeil is a close acquaintance with Nick Fuentes. In July 2021, McNeil embarked with Fuentes on a two-week “White Boy Summer” road trip, hosting public and private events with Groypers in various U.S. cities.

A prominent figure of the American Populist Union (APU), a Groyper-esque group that champions anti-immigration and anti-LGBTQ+ sentiments and regards the modern GOP as a corrupt, globalist conservative establishment.

Bryson Gray, an adamantly pro-Trump conservative rapper who has been repeatedly kicked off social media platforms for hate speech, topped the iTunes charts with an anti-Biden rap. Recently, Gray has been streaming on Cozy.tv, which is run by Fuentes. During streams, Gray speaks against the mainstream conservative movement, gives COVID-19 misinformation and goes on homophobic rants. 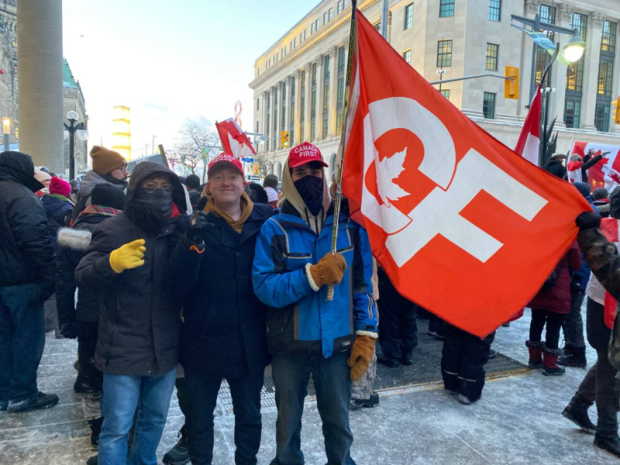 Groyper and Cozy.tv live streamer. On an August 15, 2021 livestream, Clodfelter stated, “we have to understand that race is real, and America is based in white European civilization and culture.”

Live streamer who regularly talks about conspiracies regarding global elites, anti-diversity and anti-LGBTQ+ rants. In an April 2021 guest appearance on Fuentes' live show, Augustine suggested that he intends to use TikTok to make white nationalism and America First appealing to QAnon supporters, stating, “A lot of the hard work is taking these QAnon boomers and like pointing them in the correct direction.”

Taylor is the founder of American Renaissance, a white supremacist journal and website. The journal promotes pseudoscientific studies that attempt to demonstrate the intellectual and cultural superiority of white people and publishes articles on the supposed decline of American society. Taylor promotes the idea that racial segregation is “natural,” and society is best organized along racially homogenous lines.

An alt right conspiracy theorist and founder of The Red Elephants. Red Elephants’ platform has continuously skewed statistics and used inflammatory language to promote racist, antisemitic and white supremist ideals. On his live show, James has interviewed white supremacists and those who embrace alt right beliefs, often sympathizing with their views. 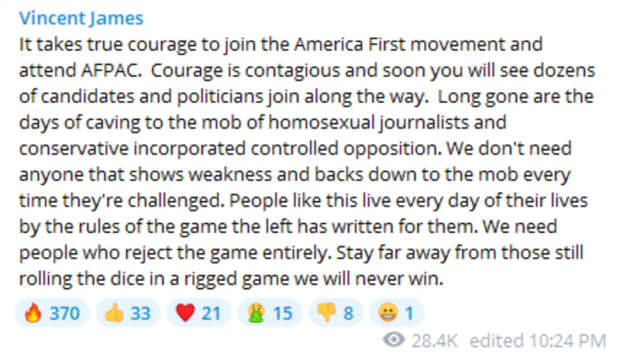 Tim Gionet, a white supremacist live streamer who goes by the moniker “Baked Alaska.” Gionet is a prominent figure in the Groyper Movement and participated in the 2017 “Unite the Right” rally in Charlottesville. Gionet is currently facing criminal charges for his actions at the U.S. Capitol on Jan. 6,  and was found guilty and sentenced to jail time for a separate 2020 assault case.

McInnes formed the Proud Boys in 2016, describing its members as “Western chauvinists who refuse to apologise [sic] for creating the modern world,” and who “long for the days when ‘girls were girls and men were men.’” In early 2019, McInnes announced that he would no longer be formally involved with the Proud Boys.

Torba is the CEO of Gab, a self-described “free speech” platform that has a long history as a haven for antisemites, extremists and conspiracy theorists. Torba has promoted a range of antisemitic tropes, such as Jews having dual loyalty to the U.S. and Israel, Jews are to blame for the crucifixion of Jesus and Jews control the U.S. government. 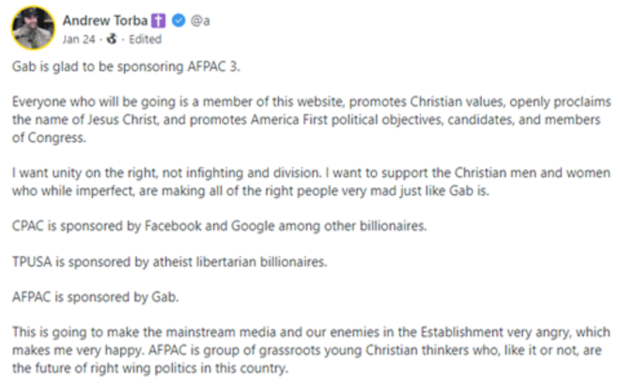 Andrew Torba announcing that Gab will be sponsoring AFPAC III.

Founder of VDARE, which publishes articles, podcasts and video content with a racist and anti-immigrant agenda. The goal of VDARE, according to their website, is to prove that “America is not a melting pot” and “the racial and cultural identity of America is legitimate and defensible.” Brimelow has hosted a variety of white supremacist figures.

Arpaio is a former sheriff in Maricopa County, Arizona, known for his harsh anti-immigrant policies that targeted Latinos in his area. The U.S. Department of Justice filed suit against Arpaio for unlawful discriminatory practices after it found he promoted racial profiling. Former President Donald Trump later pardoned Arpaio after he was convicted of criminal contempt for ignoring a court order in that case.

Arizona State Senator Wendy Rogers of Flagstaff is a retired Air Force Lt. Col. and self-described lifetime member of the Oath Keepers. She has appeared on the antisemitic TruNews where she spoke with Lauren Witzke, a white nationalist and QAnon conspiracy theorist. She also claimed Antifa was responsible for the Jan. 6 insurrection and repeatedly pushed conspiracy theories about 2020 election fraud and George Soros. Rogers often praises Nick Fuentes on social media.

Steve King formerly represented Iowa’s 4th congressional district and has a  history of antisemitic and offensive statements. King is known for his anti-immigrant views. He spoke at last year’s AFPAC II conference.

Laura Loomer is a right-wing political activist running for Congress in Florida. She previously ran for Congress in Florida in 2020. Loomer is a self-proclaimed “proud Islamophobe,” as well as a conspiracy theorist. She has asserted that school shootings in Parkland, Florida and Santa Fe, Texas in 2018 were staged and that the children were hired trauma actors.  Twitter, Instagram, Facebook and other platforms have banned her for such rhetoric. 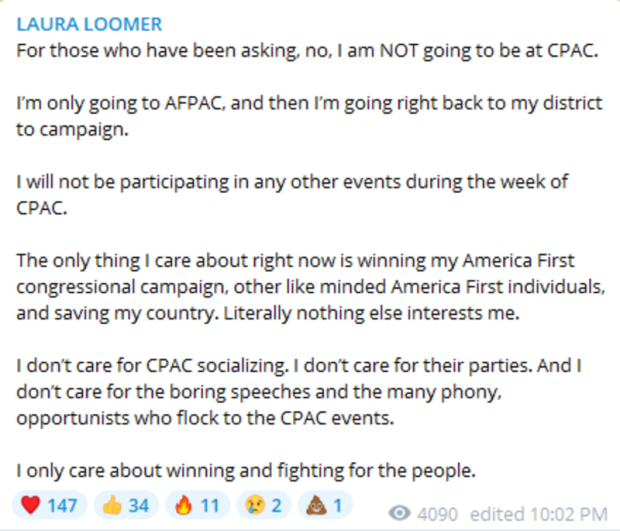 Witzke ran a failed GOP campaign for Delaware’s senate seat in 2020.  She is a white supremacist, former co-host of the antisemitic TruNews and current executive producer for The Stew Peters Show. Witzke brags that she is a “strong ally” of the Groypers Movement.

Howley is a reporter for National File, a far-right publication. On January 15 2022, Howley tweeted “There is no rule that I have to accept degenerate anti-white anti-American Zionists. I don't. You are not allowed near my family and you are definitely not allowed near any children in my family. You hate me and want to genocide me, so screw you.”

He wrote a February 24 article for National File promoting the neo-Nazi National Socialist Club and their racist and antisemitic views. Referring to NCS as a “White identity group,” Howley said, “Nationalist Social Club 131 (NSC 131) is distinguishing itself as part of a new vanguard of pro-White organizations determined to protect White people and stop the White genocide pushed by both the progressive left and the globalist corporatist Republican establishment.”

Miller is an African American political commentator and journalist. He is the former host of “The White House Brief” on BlazeTV.  He spoke at the AFPAC conference last year.

Rev. Jesse Lee Peterson is a right-wing Black minister and radio host. Peterson has made pro-slavery comments and said women should have never been given the right to vote.

Malkin, a conservative pundit and columnist, has a long history of divisive rhetoric around a range of issues - particularly immigration. In the past few years, Malkin has publicly and explicitly allied herself with white supremacists, particularly the Groypers, appearing on white supremacist podcasts and other online programs. 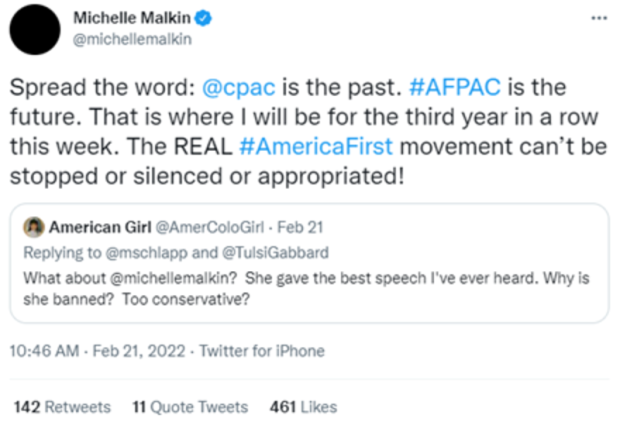 A conspiracy theorist and host of “The Stew Peters Show.” Peters has echoed many white supremacist tropes on his show, including the “Great Replacement” theory, stating, “If America replaces its existing population with foreigners who are more violent or less capable, then this country will suffer.”