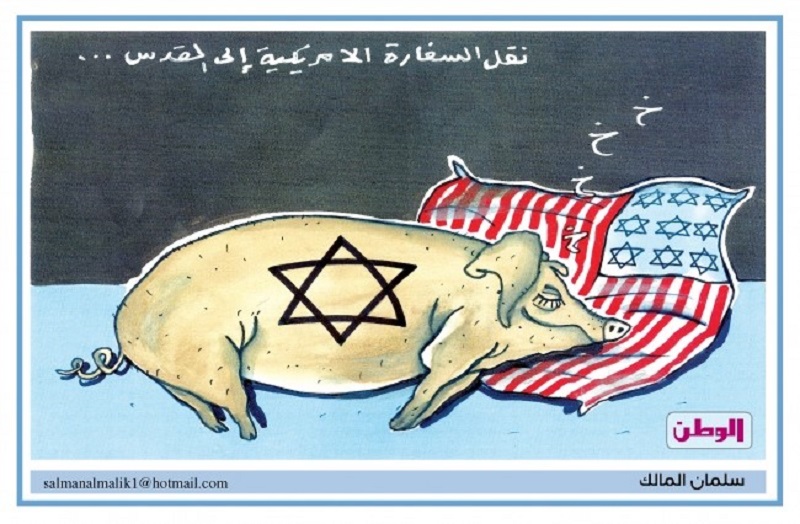 ADL has been monitoring anti-Semitic editorial cartoons in newspapers across the Middle East for decades. One regular source of such cartoons, which blatantly demonize Jews, is the Qatari media, notably by cartoonist Umayya Juha.

Backed by ADL’s long time and systematic monitoring of Qatari and other regional media, ADL was able to provide a sample of cartoons spanning a number of years, which cross the line from legitimate criticism of Israel or its policies into overt anti-Semitism.  These cartoons draw on the worst kind of anti-Semitic themes and give them new life, including conspiracy theories of Jewish world domination; blood libels; the association of Zionism with Nazism; the demonization and dehumanization of Israel and Jews; the invocation of William Shakespeare’s Shylock; and the use of stereotypical medieval Jewish imagery.

For examples, the cartoons depict both President Trump and his predecessor, President Obama as puppets in the hand of Israel and the U.S. flag’s stars replaced by Stars of David. They also include medieval Jewish figures relishing in drinking goblets of Palestinian blood and devouring the flesh of al-Aqsa Mosque, depicted as a steak. Demonization and dehumanization of Israel and Jews are similarly common in such cartoons and are manifest in the formers’ depiction as an octopus, a snake, a pig and a wolf. One cartoon includes a giant swastika marked with a Star of David and it is shown crushing Arab figures.

The Qatari government has a moral responsibility to act against the propagation of such manifestations of anti-Semitism, but it doesn’t end there. In fact, its failure to intervene is only heightened by the fact that such cartoons are in violation of the emirate’s own press law, as ADL’s letter points to.

Indeed, Qatar’s foundational 1979 press law prohibits – under penalty of closure, fines, or jail time – the publication of “any ridicule of or contempt toward any of the religions or their doctrines, including any motivation of sectarian, racial, or religious trends” or any content that harms goodwill toward a person through “defamation.”

ADL’s letter emphasizes the real consequences such defamation could have and urges the Qatari government to stand up to hatred and enforce its own laws, instead of turning a blind eye to them.  We await the Ambassador’s reply, and the Emirate’s action.

Following are examples of such cartoons: 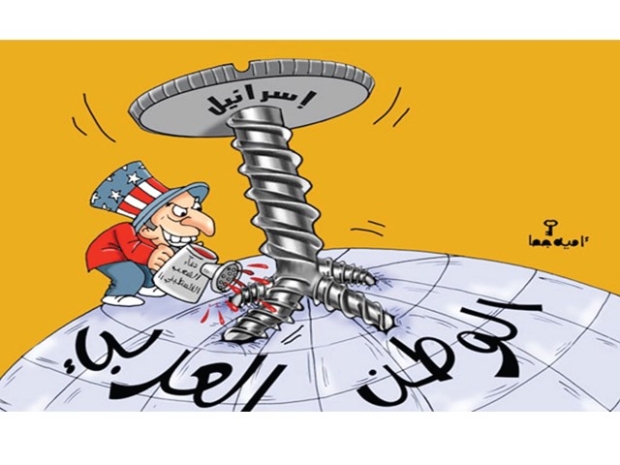 Text on top says "Israel," text on bottom says "The Arab Homeland," and the text on the water can says "the blood of the Palestinian people." Published December 11, 2018. 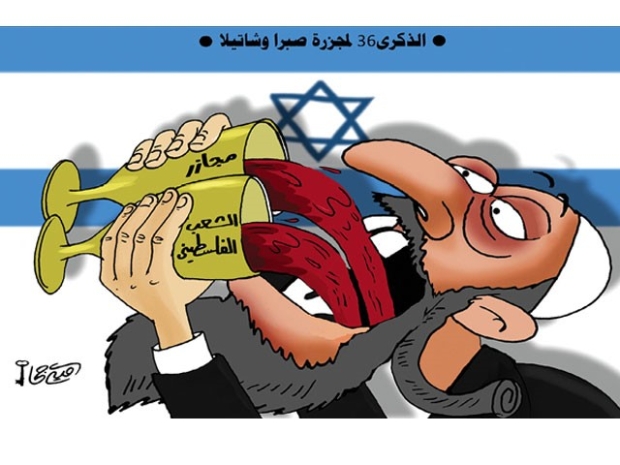 Text on top reads, "the 36th anniversary of the Sabra and Shatila massacre." The text on the goblets reads "massacres and "the Palestinian people." Published September 18, 2018. 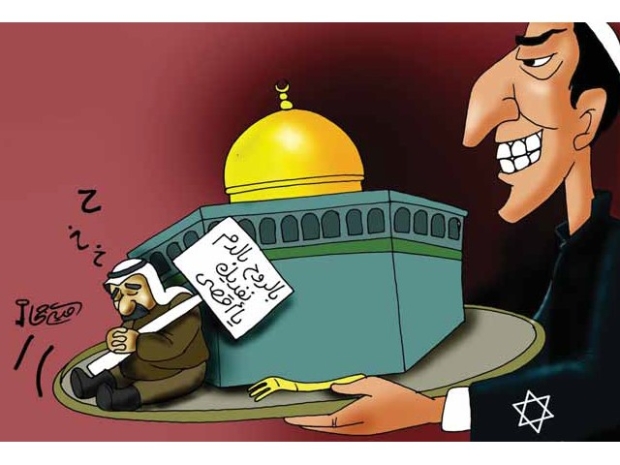 Text above the sleeping person on the left represents snoring noises. The text on his sign says, "with spirit and blood we sacrifice for you, oh, al-Aqsa." Published August 21, 2018. 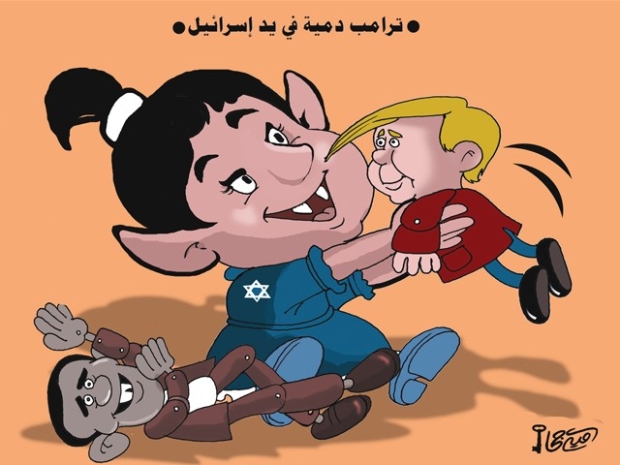 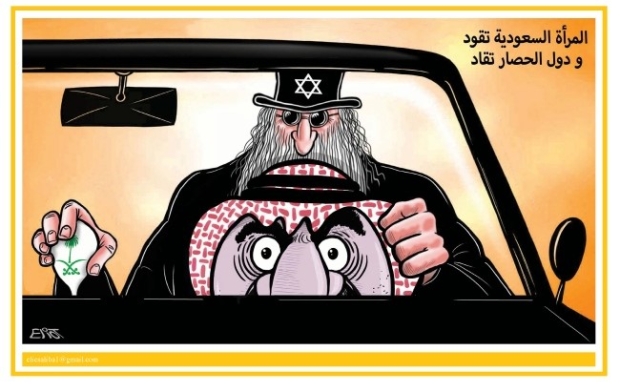 Text on top right says, "Saudi women drive and the states of the blockade [against Qatar] are driven." The logo on the gear shift symbolizes Saudi Arabia. Published on June 25, 2018. 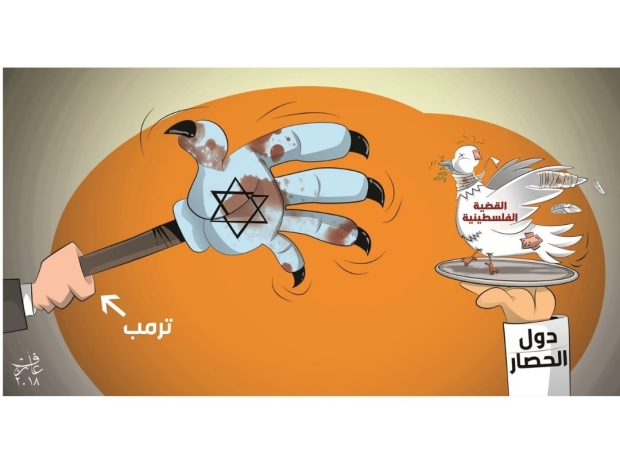 Text on the hand on the left says, "Trump." The text on the arm on the right says, "the states of the blockade [against Qatar]." And the text on the dove reads, "the Palestinian issue." Published May 26, 2018. 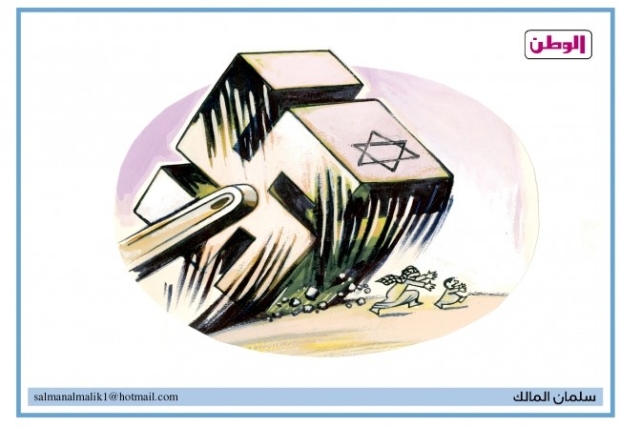 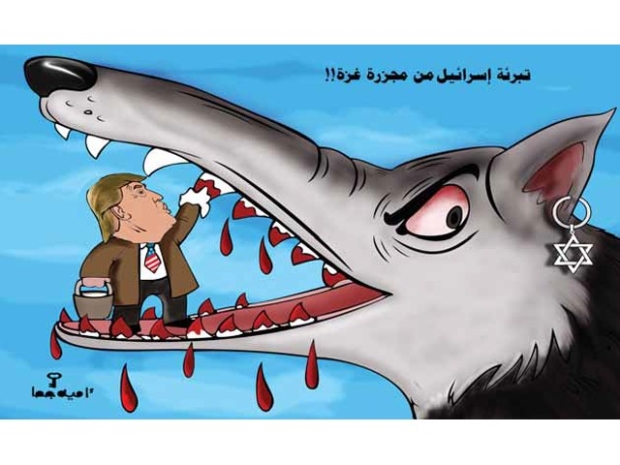 Text on top says, "Exonerating Israel from the Gaza massacre!!" Published May 17, 2018. 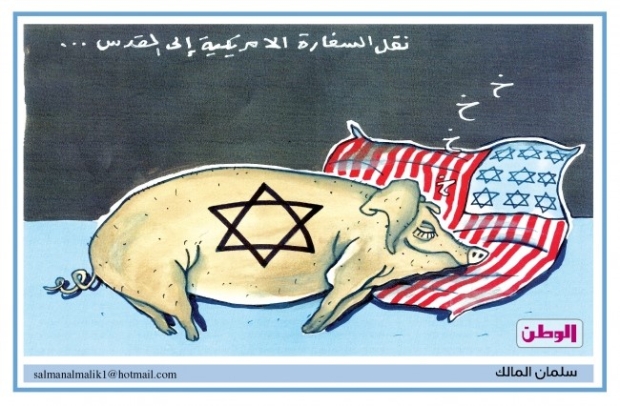 Text on top says "Moving the American Embassy to Jerusalem." Published May 5, 2018. 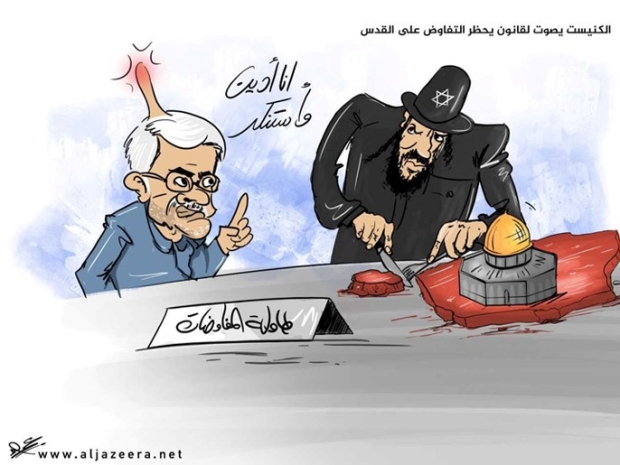 Text on top says, "the Knesset votes for the law banning negotiations over Jerusalem." The speech text over Palestinian Authority President Abu M azen says, "I condemn, and I denounce." And the text on the card on the table says, "the negotiations table." Published January 6, 2018. 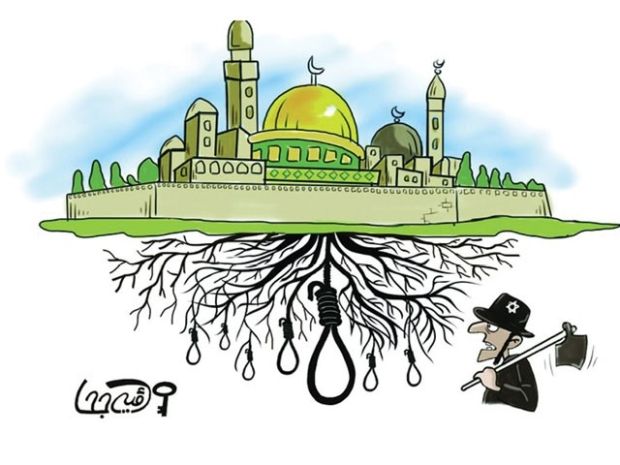 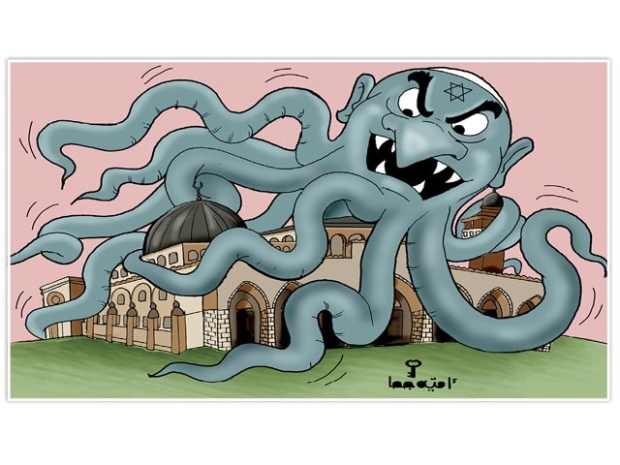 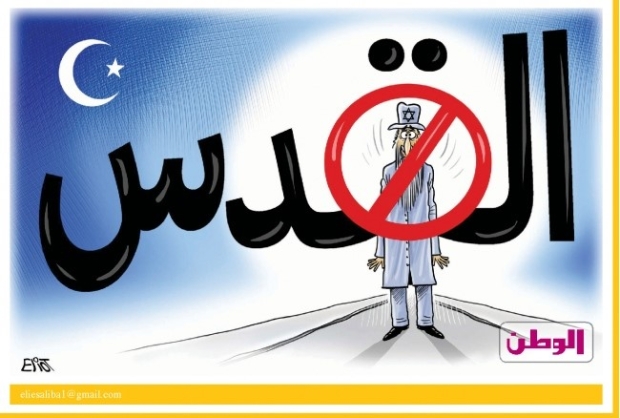 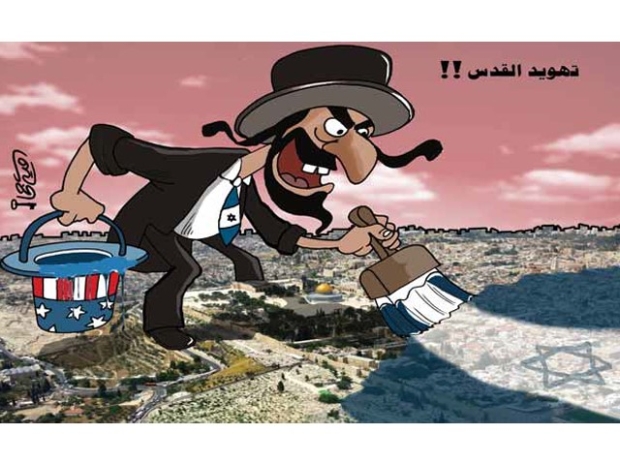 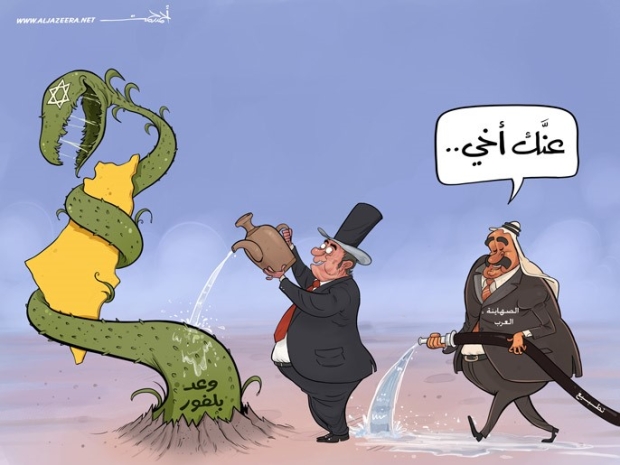 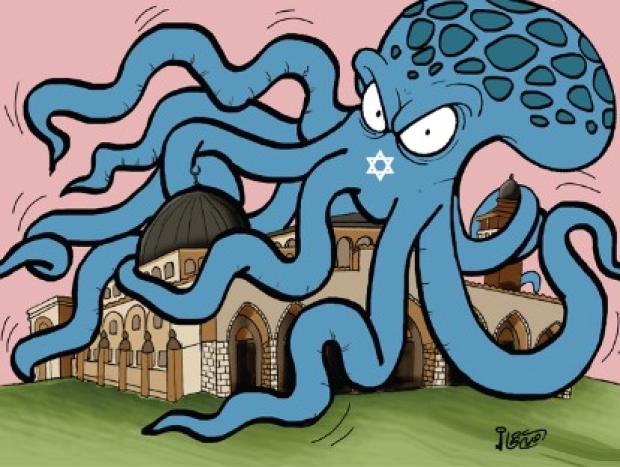 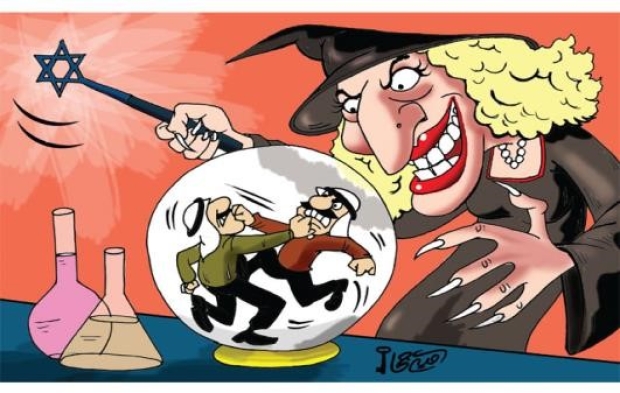 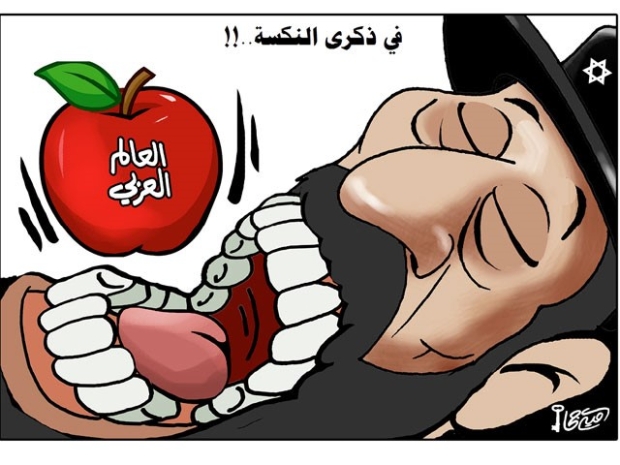 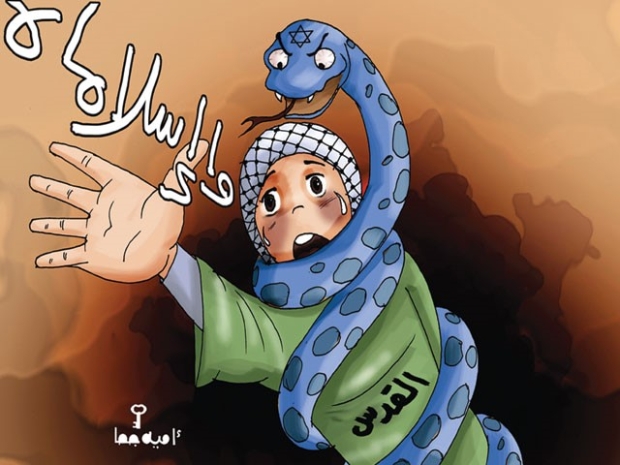 Text on the person says, "Jerusalem." The text the person is exclaiming roughly translates to "Help me, fellow Muslims!" Published July 22, 2015. 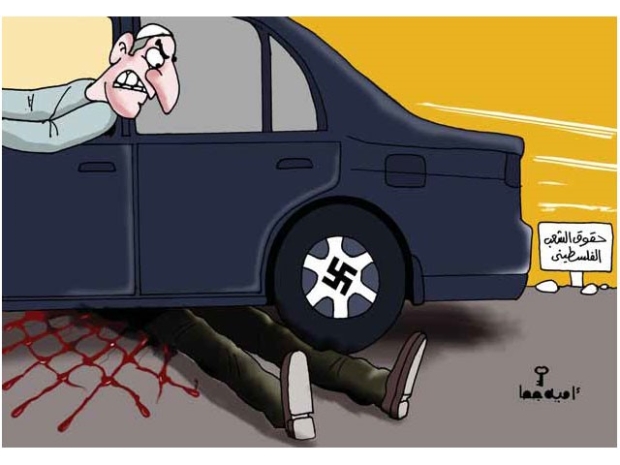 Text on the sign says, "the rights of the Palestinian people." Published March 28, 2015.