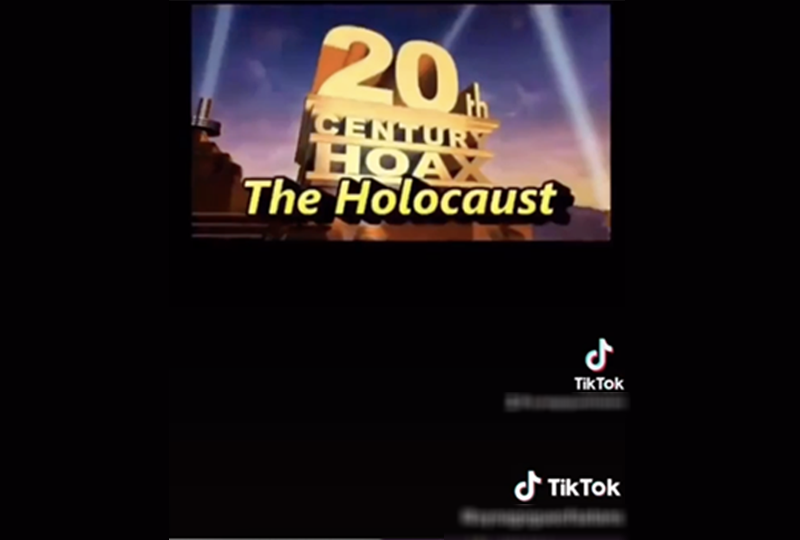 Over the last few years, TikTok—the social media app that allows users to create and share short videos—has gained immense popularity. With hundreds of millions of users, the platform is particularly popular among younger individuals. As ADL’s Center on Extremism (COE) documented in August 2020, while much of the content on TikTok is lighthearted and fun, extremists have exploited the platform to share hateful content and recruit new adherents. A recent review of the platform found that antisemitism continues to percolate across the app, including content from known antisemitic figures, as well as posts perpetuating age-old antisemitic tropes and conspiracy theories. This review of TikTok is not intended to quantify the amount or prevalence of antisemitism on the platform, but rather to offer an impressionistic sense of the type of antisemitic content that can be found with only a few taps. It should be noted that when alerted to the content ADL COE found, TikTok took down the specific content. While we appreciate their removing the specific content and their stated commitment to a zero-tolerance policy on antisemitism and hate, we are concerned that it took our notification to do so and encourage them to address this systematically.

Recordings of Louis Farrakhan, Rick Wiles, and Stephen Anderson—all antisemitic individuals whose bigotry has been thoroughly documented by ADL—were readily available on TikTok. One such post, shared on May 23, 2021, showed a clip of a TruNews segment in which Rick Wiles states: “And our leaders are lowlife scum that screw little girls so the Jews can screw America...we’ve allowed Kabbalah practicing Jews to defile the nation.” TruNews, a fundamentalist Christian streaming news and opinion platform that produces antisemitic, antizionist, anti-LGBTQ and Islamophobic content, has been banned from YouTube and Facebook for violating the platforms’ content rules.

Farrakhan’s sermons, which are filled with antisemitism and dangerous conspiracy theories, are readily available across TikTok. Multiple videos, for example, show Farrakhan making false accusations about Jews being disproportionately responsible for the transatlantic slave trade and promoting the antisemitic and conspiratorial Nation of Islam publication, "The Secret Relationship Between Blacks and Jews." 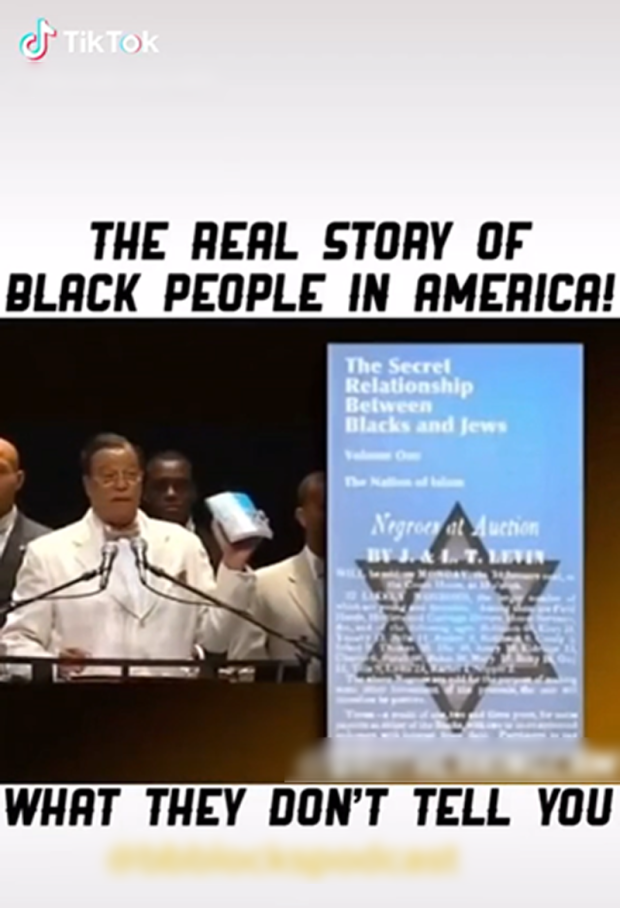 In addition, a multi-part series of antisemitic posts was found on TikTok. The posts claimed to expose the “satanic origin” of the Star of David and featured segments from Stephen Anderson’s 2015 documentary, “Marching to Zion.” Anderson’s sermons and other content are consistently removed from YouTube for his antisemitic and hateful rhetoric. 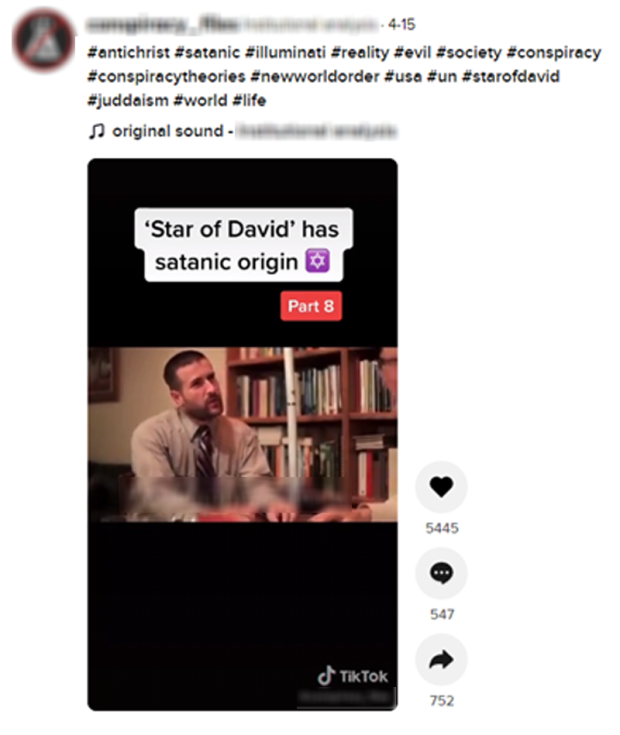 Moreover, the Goyim Defense League, a loose network of antisemites who recently concluded their two-week virulently antisemitic “Name the Nose” tour protesting Jewish institutions in Florida, had a TikTok profile with over 1200 followers. GDL stated in its social media communications that it wanted to use its TikTok to share livestreams of the organization’s antisemitic antics. The profile also advertised the link to GDL’s video-streaming website that streams almost exclusively antisemitic content.

In addition to known antisemitic figures, miscellaneous users have also been sharing conspiratorial and hateful antisemitic tropes on TikTok. Some users tout Holocaust denial and the conspiratorial claim that Jews were responsible for 9/11. 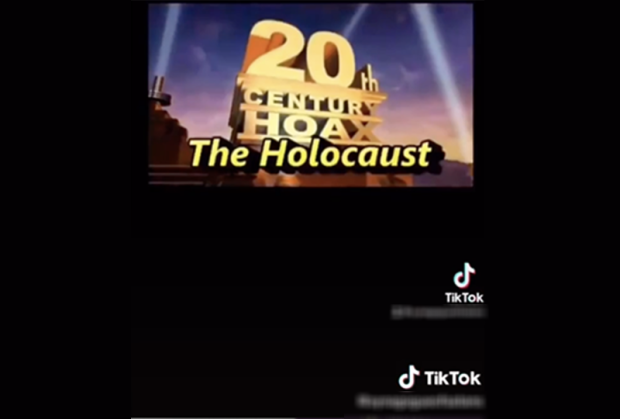 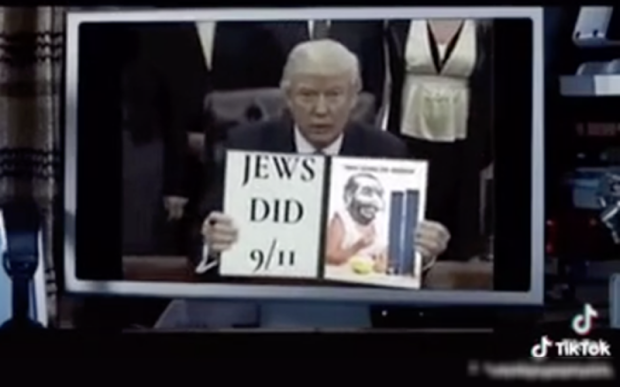 The image above was cropped and enlarged to enhance legibility.

Others promoted the age-old tropes of Jewish control of the government, the media apparatus, and financial institutions. One such user with over 1400 followers consistently shared antisemitic videos in which he made claims such as, “It’s not the illuminati man. It’s the Jews. They own everything. They own the media. They own the banks. They run the schools, try to brainwash our kids...they’re running everything.”

Even more nefarious are those who threaten Jews, as in the case of one user who said on video, “I will completely destroy ZOG and kill every single member,” while he was wearing a Nazi uniform hat. ZOG is a white supremacist acronym for "Zionist Occupied Government," which reflects the common white supremacist belief that the U.S. government is controlled by Jews.

There are also users on TikTok who have referred to Jews and Judaism as the Synagogue of Satan and “fake Jews.” The latter phrase promotes the view that modern Jews are imposters and implicitly demeans their religious practice. 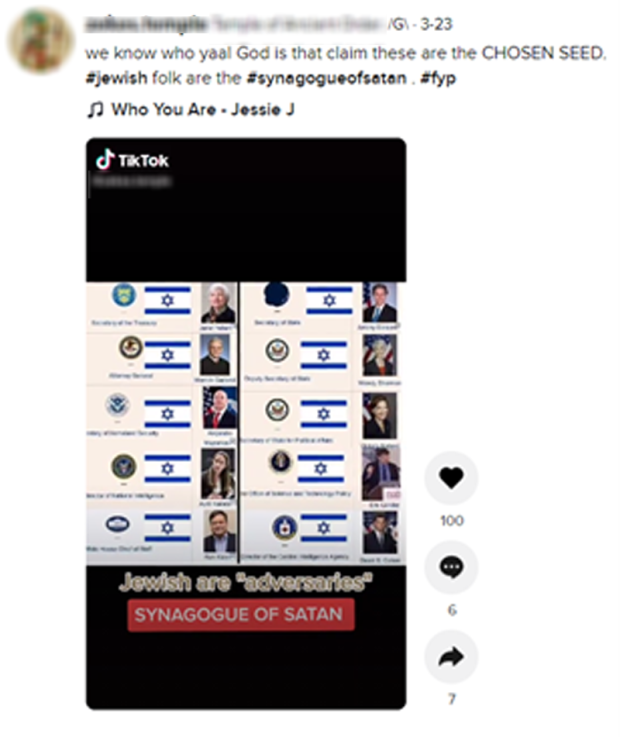 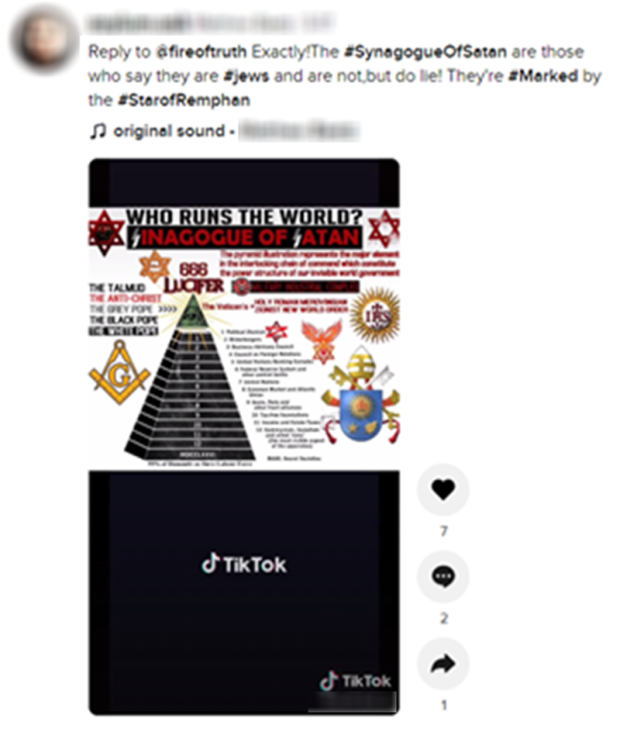