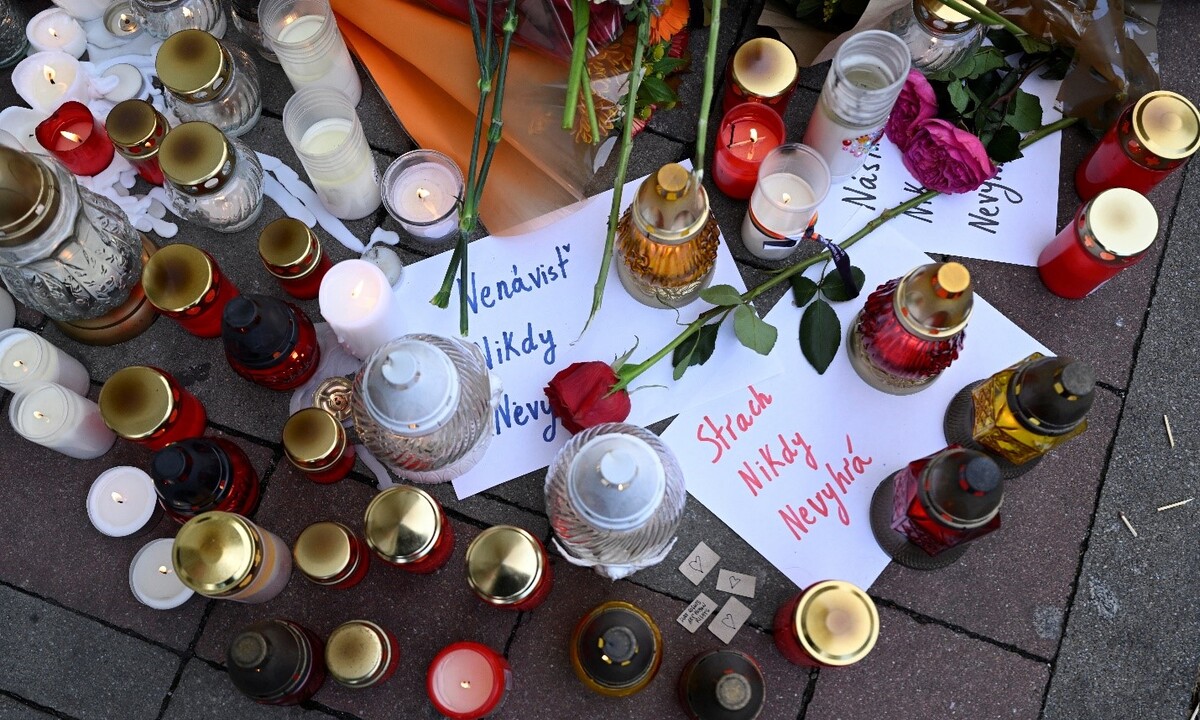 Tributes and slogans at the site of a shooting in Bratislava, Slovakia REUTERS/Radovan Stoklasa

Footage of Buffalo Attack Spread Quickly Across Platforms, Has Been Online for Days

Murder and Extremism in the United States in 2021

On October 12, a 19-year-old man opened fire in front of an LGBTQ+ bar in Bratislava, Slovakia, killing two people and injuring a third before he was found dead the following morning. A review of a screed shared on Twitter by the shooter a few hours before the attack, as well as his broader social media presence, makes it clear that he harbored anti-LGBTQ+ and antisemitic beliefs, and subscribed to an accelerationist, white supremacist worldview.

The ADL Center on Extremism’s investigation also revealed that for over a year the shooter had been posting violent and hateful content publicly on Twitter, an act that raises questions about the effectiveness of Twitter’s content moderation and the platform’s role in spreading white supremacist content. At this time this shooter does not appear to be part of a formal white supremacist group, making this the latest incident involving an individual who self-radicalized via the internet, and used the hate they consumed as fuel to launch an attack on their perceived enemies.

Ideology of the Shooter

Based on available evidence, it is abundantly clear that the perpetrator’s worldview was poisoned by antisemitism. On the very first page of his manifesto, the attacker blames Jews for a host of global problems, asserting that Jewish people control the media and financial system and accusing Jews of being responsible for perceived societal degeneracy, namely by supporting the LGBTQ+ community. The shooter alleges that Jewish people are implementing a plan for global domination that will ultimately result in the destruction of the white race unless white people stand up and fight.

Within the manifesto, the shooter references the “14 words,” a popular white supremacist slogan promoting the protection of a white future, as his ultimate objective and lists the destruction of the “Zionist Occupied Government” (ZOG), as the first goal towards achieving this aim. Of note, rather than one unified ZOG, he believes that there is a western ZOG–represented by the United States–and an eastern ZOG—represented by Russia. Underscoring his rampant antisemitism, the shooter’s last goal calls for the murder of all Jewish people and the expunging of Jews from history.

In addition, he references the Great Replacement theory, a white supremacist conspiracy theory that argues white people are being replaced by people of color, and accuses Jews of being responsible for this perceived phenomenon. This theory has inspired white supremacist violence around the world, most recently in the May 14, 2022, Buffalo shooting.

The Bratislava shooter subscribed to accelerationism, a white supremacist concept arguing that aggressive action is needed to hasten the collapse of modern society to create a white ethno-state. The attacker asserts that there is no political solution to the problems he believes exists, and that white people will need to engage in violence on a large scale to achieve their political objectives. In furtherance of this, he cites prominent white supremacist William Pierce’s call to take actions to destroy ZOG as soon as possible. Accelerationists have carried out violent attacks in the name of hastening society’s collapse around the world, and based on his manifesto, the attacker viewed himself as continuing the work of previous mass murderers.

Unlike prior mass shooters, who have generally uploaded their hate-filled screeds to fringe platforms like 4chan and 8chan, the Bratislava gunman uploaded his manifesto to multiple anonymous file sharing sites before disseminating a link to it on Twitter. This is fitting with the shooter’s frequent use of the mainstream social media platform.

According to a review of his social media presence, the shooter had maintained a Twitter account since April 2021, on which he publicly shared white supremacist rhetoric and imagery for over a year. Despite a history of obvious references to violence, the gunman’s account remained active and visible until after the attack occurred, which brings Twitter’s moderation practices into serious question. Among his tweets were racist slurs, white supremacist 4chan screenshots, posts glorifying other mass shooters and Nazi war criminals as heroes, and several images of the Nazi sonnenrad symbol, which has been used by white supremacists and other mass shooters, including the Buffalo and Christchurch shooters.

The attacker also used Twitter to repeatedly hint at plans for carrying out an act of mass violence. In September, he produced a series of tweets referencing a violent “operation,” stating that people should not carry out such an act unless they are prepared to take another person’s life. A few days later, he wrote about an impending “race war” and stated that white people would win it and that Jewish people would be killed in such a conflict.

More disturbingly, the gunman also scoped out the bar he eventually attacked and shared photos of himself outside the venue in August. In the hours prior to the attack, the gunman appears to have tweeted his intention to carry out an act of violence, and after the shooting, he appears to have bragged about the attack.

Echoes of Past Mass Shootings

The Bratislava shooter appears to fit the mold established by previous white supremacist mass shooters who became radicalized by consuming hateful content online rather than through personal connections with members of extremist groups. In fact, the perpetrator repeatedly expressed admiration for previous white supremacist mass murderers, including those responsible for massacres in Buffalo, New York; Christchurch, New Zealand; Pittsburgh, Pennsylvania; Poway, California; and Charleston, South Carolina, among others. In his writing, he explicitly links himself with these past killers, and it is clear through his act of violence that the Bratislava gunman believed himself to be part of this tradition of bloodshed, a perceived necessity to ensure the survival of the white race, and that he sought to inspire others to follow in his footsteps.

In particular, the shooter was inspired to act by the Buffalo mass shooter. He claims that he began writing his hate-filled screed last year, but decided to revisit it again following the May 2022 Buffalo attack and then started to plan his own act of violence.

Given his admiration for past killers, it is no surprise that elements of the Bratislava shooting mimic prior attacks. For example, similar to previous killers, the shooter appears to have radicalized in deeply hateful and violent spaces like 4chan, 8chan and Telegram, all spaces frequented by white supremacists and whose communities glorify acts of violence. Similarly, prior to the shooting, the gunman posted his virulently antisemitic manifesto on Twitter, which outlined his reasons for the attack. This follows the approach of multiple white supremacist mass shooters who have come before him: posting hate-filled screeds online, in hopes that they will go viral, giving them public infamy and inspiring the next mass shooter. Already, violent extremists have begun lauding the Bratislava shooter as a “saint,” equating him to earlier white supremacist terrorists—the very ones that he had admired.