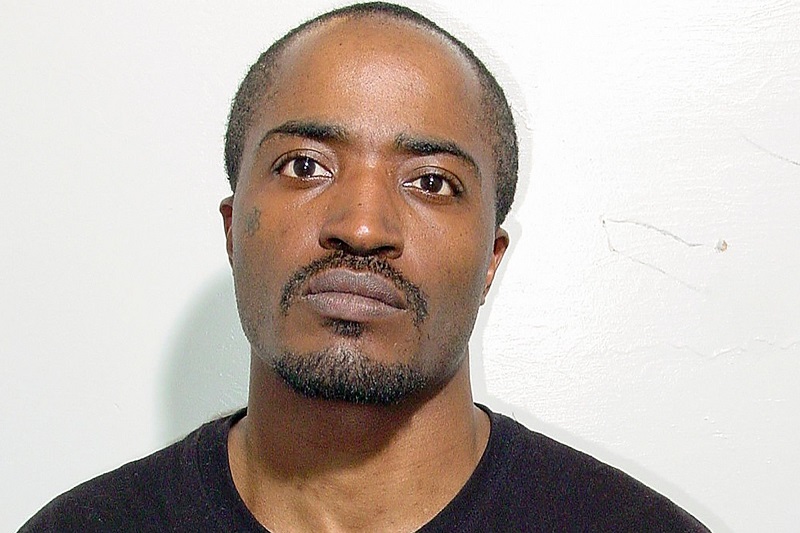 Further evidence of alleged Jersey City shooter David Anderson’s extremist views has emerged in the form of a Facebook account with username Dawad Maccabee, which was active from July to December 2015. Anderson is one of the two individuals who allegedly attacked the JC Kosher Supermarket in Jersey City, NJ, on December 10, 2019, killing three people. Earlier that day he allegedly killed police detective Joseph Seals. The Facebook profile features images of Anderson and hundreds of posts that give evidence of his extreme ideology, including rabid anti-Semitism, and hatred of police and white people. There is a distinct and undeniable pattern of virulent rhetoric that indicates deep hostility and a propensity for violence towards his purported enemies – Jewish people.

ADL has documented Anderson's activity on various social media platforms, including Facebook, Soundcloud and Instagram. The content linked to Anderson should serve as a reminder to all social media platforms that they have a responsibility to identify and mitigate the type of content that fuels hateful ideologies and can lead to real-life violence.

Though he reposted and engaged (on Facebook) with individuals associated with groups within the Black Hebrew Israelite movement, he was also critical of organized churches or “camps.” He wrote, “All Israelite camps have proven to mislead people. Remember the scripture and you cannot go wrong.” And, “Yahawahshi said to the disciples to go and make disciples of men not camps of men who need 501c3 plans...” 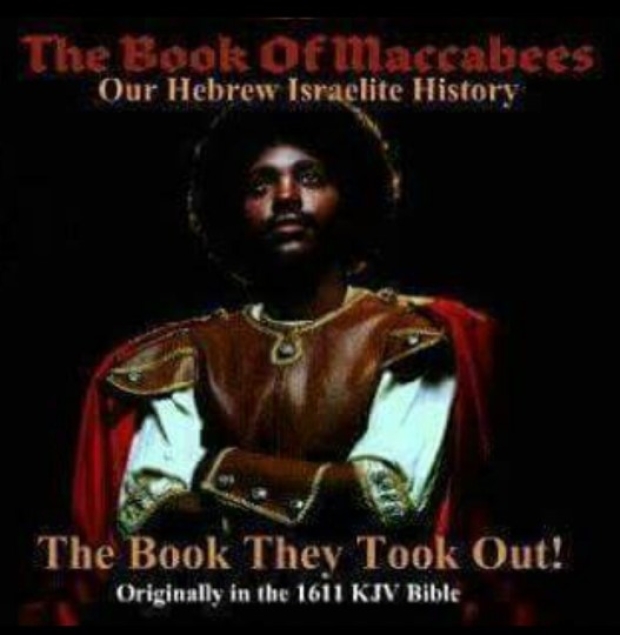 His incorporation of “Maccabee” in his screen name and Facebook posts implies that he identified with a Jewish warrior insurgency which existed in second century B.C. He often posted or reposted references to his use of the King James 1611 Bible, which includes the Books of Maccabees. In a July 2015 post he wrote that King James was a black man whose words were “meant to stir us to action,” adding, “A passive man is a comfort to his enemies.” He also reposted a friend who wrote, “The Book of Maccabees 1 predicted long ago that the whites would ‘change the face of the ORIGINAL Messia’ for selfish gain. Maacabees [sic] was taken OUT of the original ‘text’.” This is a reference to 1 Maccabees 3:48, where the verse states that non-Jews had “painted their likeness” on the holy books; some Black Hebrew Israelites interpret this as a prediction that white people, including modern Jews, would hide the original truth of the bible as they perceive it, and substitute themselves in place of the original black tribes of Israel. 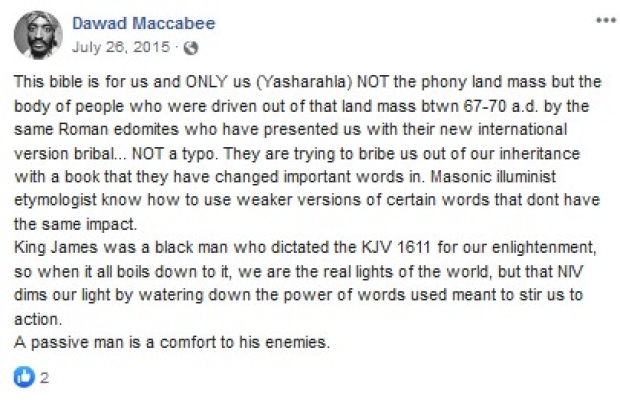 Anderson took that warrior spirit much further in a July post when he wrote that he could not wait for “Yahawah” (God) to have “his angel blow that shufar and give the order to dash little edomites against the stones” because he had a “RIGHTEOUS vengefulness within” him waiting to be released and that he could use “all of his edomite military anti terrorist [sic] training” against his enemies. In Black Hebrew Israelite theology, “Edomites” refer to the enemies of God, including white people, whom they believe to be descended from the biblical patriarch Jacob’s brother Esau, who was also known as Edom. It is clear from his writing that he used this term to refer disparagingly to Jewish people.

The next day he posted an image of himself holding a machete which he captioned, “When the final shufar is blown...” 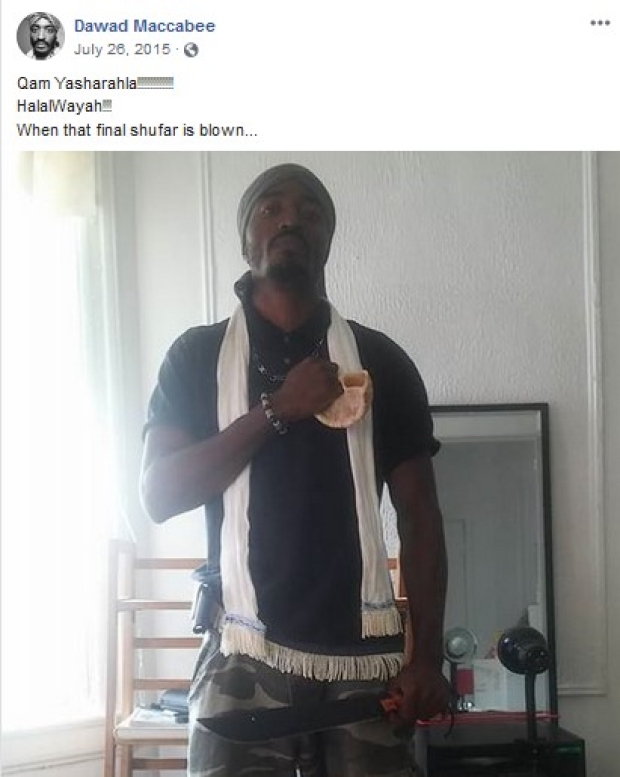 Numerous posts in this Facebook account illustrate Anderson’s hatred for Jews, whom he sometimes refers to as Khazars – a reference to an anti-Semitic conspiracy theory that modern Jews are descendants of an Eastern European tribe from the eleventh century. In July 2015 he wrote, “Brooklyn is full of NAZIS – ASHKE-NAZIS (KHAZARS).”  (“Ashkenazi” is the name of a Jewish ethnic group, which includes many Hassidic and ultra-Orthodox Jews.) He went on to allege that Jews were responsible for murdering black men because “the police are their hand now.” 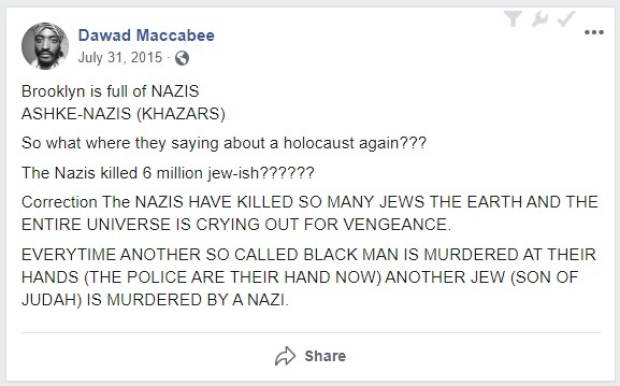 In September 2015, Anderson reposted an image which attacked “Jewish businessmen” for allegedly siphoning money out of the black community. In August 2015, Anderson posted a photo montage of Jewish people along with the New Testament verse, “I know the blasphemy of them which say they are Jews, and are not, but are the Synagogue of Satan.” Anderson also believed that Jews created the State of Israel “as an attempt to make us believe that they were the Jews (us) that the bible speaks of and their exodus from Auschwitz was our exodus from captivity.” 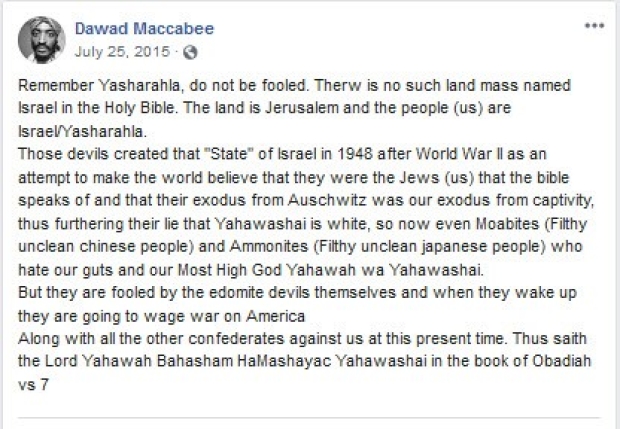 Anderson’s hatred of Jews even led him to repudiate notorious anti-Semite Louis Farrakhan in September 2015 when Farrakhan posed with two representatives of an extreme Jewish sect called Neturei Karta. Anderson reposted a photo of the three men which was captioned with “Farrakhan and Fake Jews…Ooh I smell a rat.” Anderson himself wrote, “Farrah-Con is, well…A Con.” 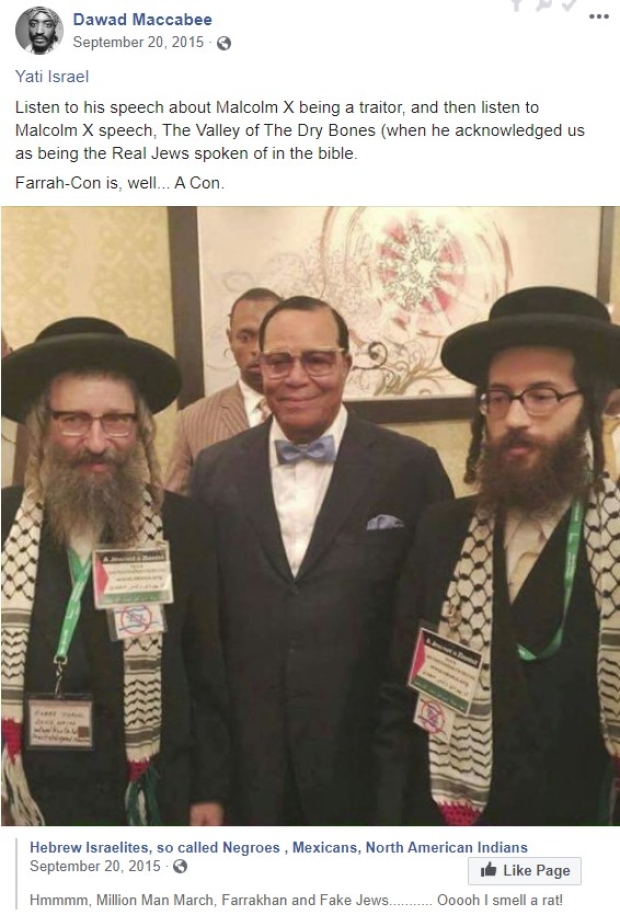 Racism, homophobia, and hatred of police

Other posts from this Facebook page indicate Anderson’s hatred for white people, law enforcement, and the LGBT community, including: