Clear Pattern of Israel-related Antisemitism Evident on Some Midwestern Campuses 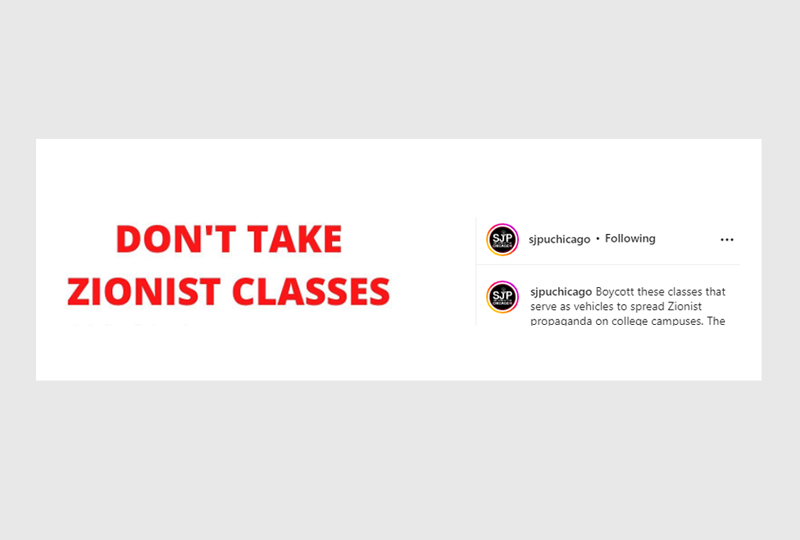 Some Nakba Day Events Descend into Support for Violence, Antisemitism

In recent years, several college campuses across the Midwest have seen a troubling pattern of antisemitic anti-Israel activity. Recent examples have included: the targeting of Hillel, the premier center for Jewish student life on college campuses, with graffiti reading “Free Palestine” and an object thrown during an anti-Israel protest; the dissemination of a pamphlet depicting Israeli Jews as pigs; a call to “LEAVE [Israel] if you are Jewish” and a meme posted on social media encouraging others to “start shaming Zionists” to “go back to Brooklyn.”

Similar developments have involved the vilification and ostracization of any Israel- or Zionism-related study or activity, including a call for a boycott of Chicago-area Israeli restaurants and an accompanying declaration that patronizing them “directly funds genocide” and a social media post discouraging students from taking “sh*tty Zionist classes.” Most Jews worldwide, regardless of their political views, consider a connection to Israel, and support for its right to exist, to be a part of their Jewish identity.

Eight of the 10 examples listed below are from anti-Zionist campus group Students for Justice in Palestine (SJP), a reflection of the tendency of some within the organization to espouse inflammatory, extreme and antisemitic rhetoric. All of this comes as antisemitic incidents across the country have been at a historic high. 2021 saw the highest number of reported antisemitic incidents since ADL began annual tracking in 1979.

These developments have intimidated and caused significant distress among campus Jewish communities. The targeting of Hillels with a physical attack, vandalism and protests have caused many Jewish students to fear for their physical safety and well-being. These actions against Hillel – a center of Jewish life on campus – can feel like an attack on the Jewish campus community at large. The use of classic antisemitic tropes only compounds these issues and contributes to a more hostile campus environment.

Additionally, since it is likely that most Jewish students, like American Jews broadly, identify as Zionists or feel a connection with the state of Israel as the Jewish homeland, labelling Zionists as inherently nefarious can lead to their exclusion. Indeed, in some instances, campus groups have explicitly declared their opposition to having “Zionist” members or even the presence of Zionists in certain campus spaces.

A string of developments on several campuses in the Midwest over the past couple years has brought these issues to the fore: 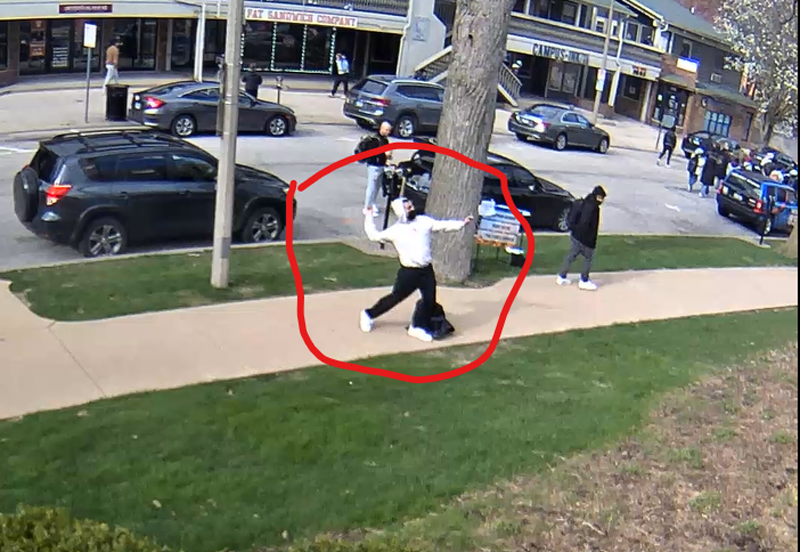 April 2022, University of Illinois Urbana-Champaign: While students held a Passover celebration on the rooftop of the Hillel, a group of students led by SJP protested in front of the building and chanted “From the River to the Sea, Palestine will be free.” Some student leaders delivered speeches that were intensely hostile to Zionism and Hillel and which criticized Hillel for supporting trips to Israel. Before the group left, one of the protestors threw an object at the Hillel building, constituting a physical attack on the center for Jewish life on campus. 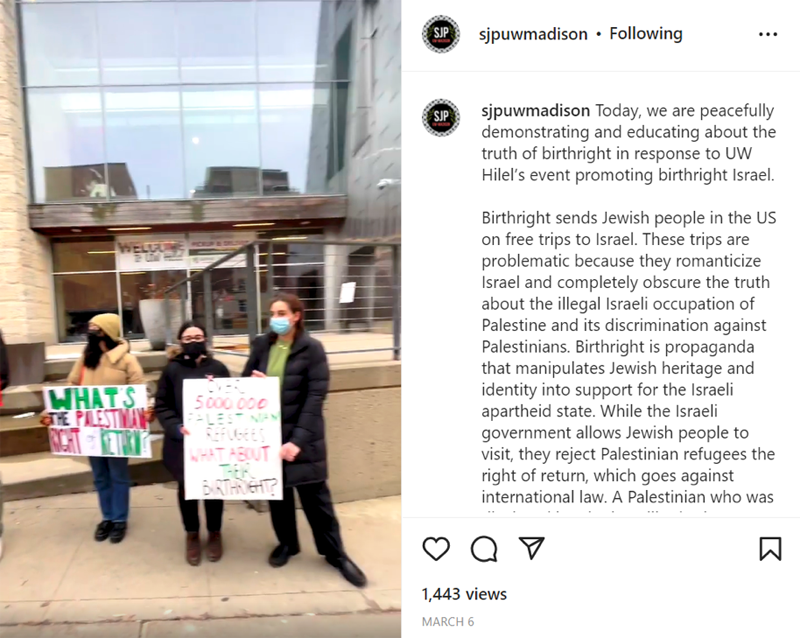 March 2022, University of Wisconsin-Madison: SJP protested outside the campus Hillel building, posting a video showing approximately a dozen students holding signs in opposition to Birthright, a free trip to Israel for young Jewish individuals. An accompanying Instagram post by the non-Jewish group attempted to disparage Birthright and its participants: "Birthright is propaganda that manipulates Jewish heritage and identity into support for the Israeli apartheid state." 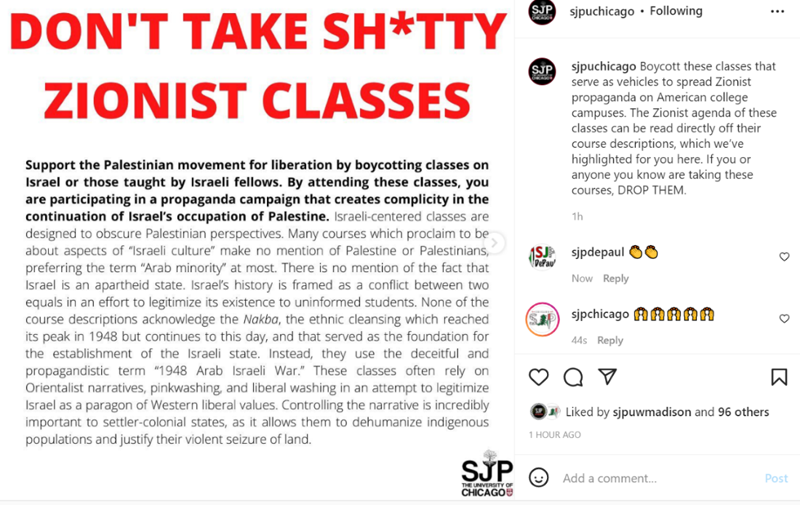 January 2022, University of Chicago: SJP took their aim at Zionism and the Israeli nationality of professors, posting a call on Instagram to boycott "Zionist classes” and those “taught by Israeli fellows." The targeting of “Zionist classes” is antisemitic because it impugns the vast majority of Jews for whom Zionism is a part of their Jewish identities. The call also seemed to be aimed at intimidating fellow students who may have been interested in such courses. In an explanatory document that plays into antisemitic tropes, SJP later claimed their call was focused on classes offered by the Israel Institute and alleged that its main donor, the Schusterman Family Foundation, funds a  "coherent network of institutions" that deceptively "propagandizes students" into sympathizing with "Zionist colonialism." They named predominantly Jewish institutions, including: Israel on Campus Coalition, Anti-Defamation League, Birthright, ITrek, American Jewish Committee, Hillel and American Friends of Tel Aviv University. The original post remains on SJP’s Instagram account.

December 2021, University of Illinois-Chicago: SJP posted a call to “boycott Israeli restaurants in Chicago!” They added that “The money you spend towards Zionist businesses directly funds genocide.” A boycott of “Zionist businesses” effectively targets American Jews, a majority of whom view a connection with Israel, and support for its right to exist, as part of their Jewish religious, cultural and/or ethnic identities. Accusing any “Zionist business” of funding “genocide” also serves to blame the vast majority of Jews for the alleged actions of Israel. 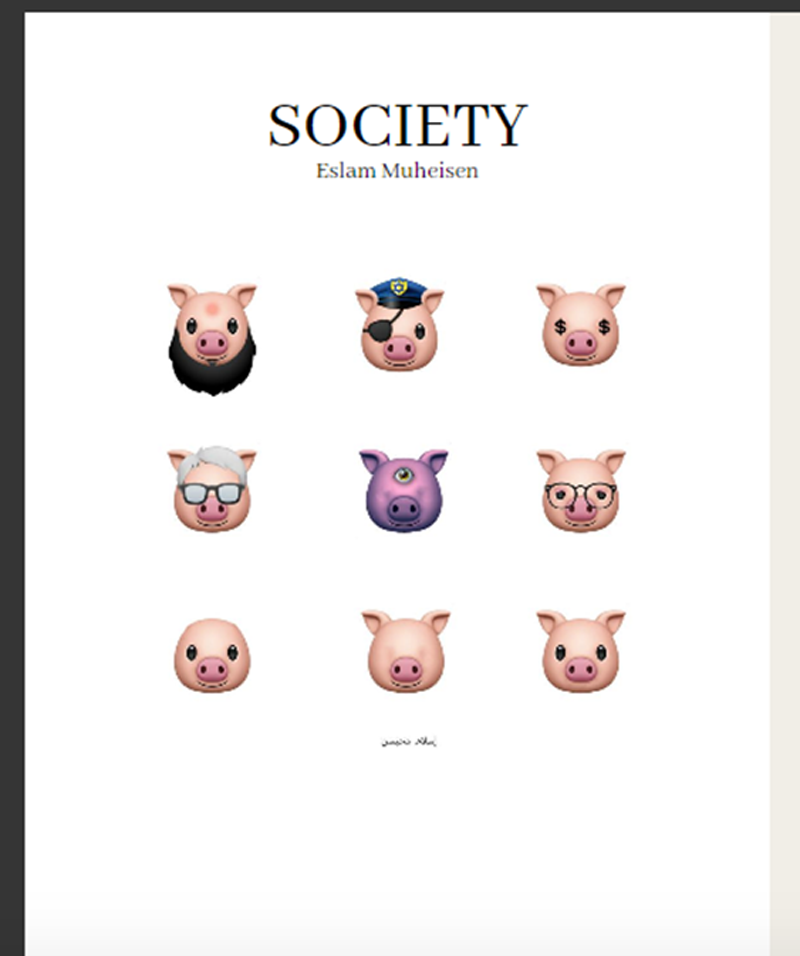 November 2021, University of Chicago: SJP at University of Chicago published a zine (an electronic pamphlet) on their Instagram account that depicted Jews as pigs, including one pig with dollar signs instead of eyes, perpetuating a trope about Jews and money. The images also serve to dehumanize Jews, playing into another historic antisemitic trope. 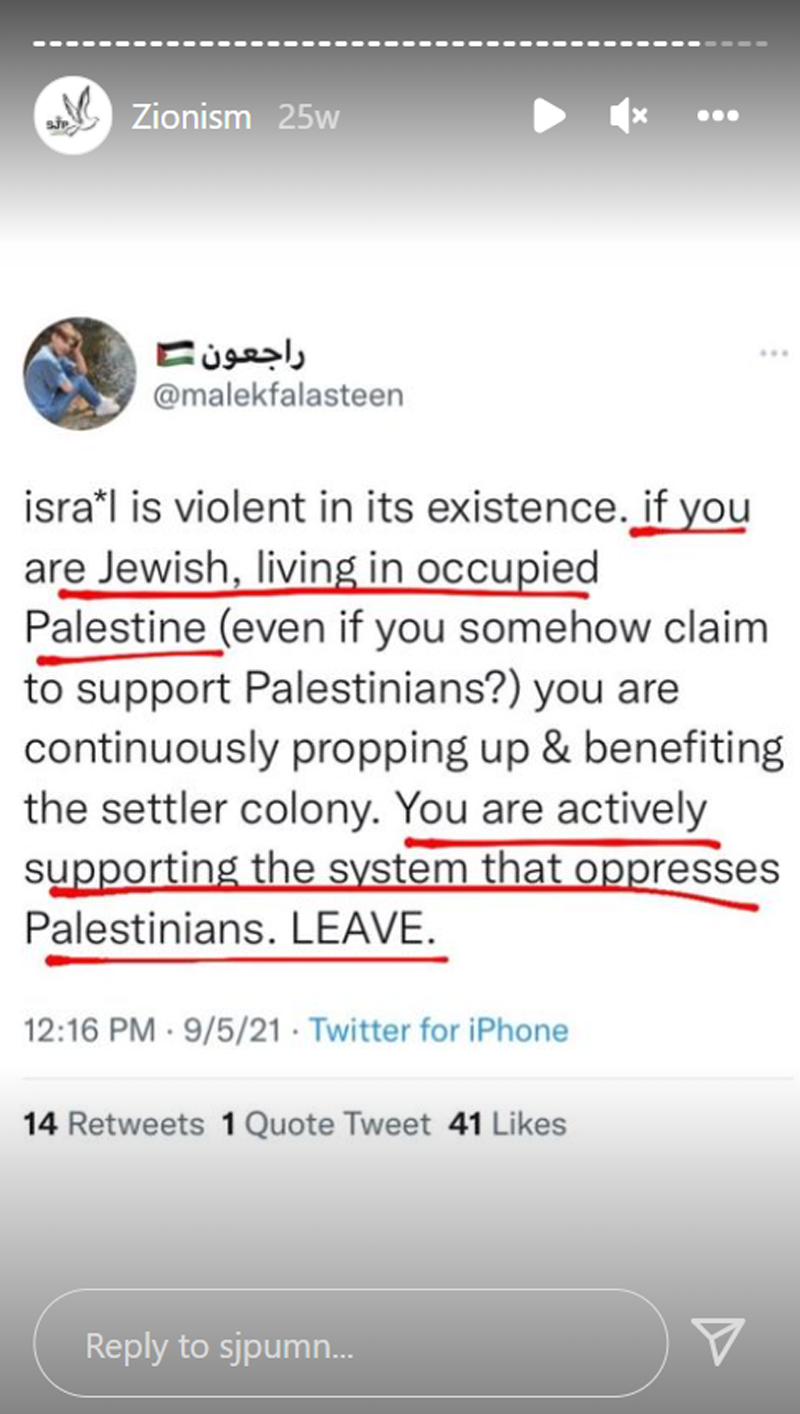 September 2021, University of Minnesota: SJP re-posted a tweet on Instagram alleging “isra*l is violent in its existence” and demanding: “if you are Jewish, living in occupied Palestine...LEAVE."

June 2021, University of Illinois, Urbana-Champaign: A description of a group for law students lists Zionism as a “system of oppression,” ironically alongside antisemitism itself. Other ideologies to be combatted that were listed included: capitalism, white supremacy, sexism, queerphobia and Islamophobia. 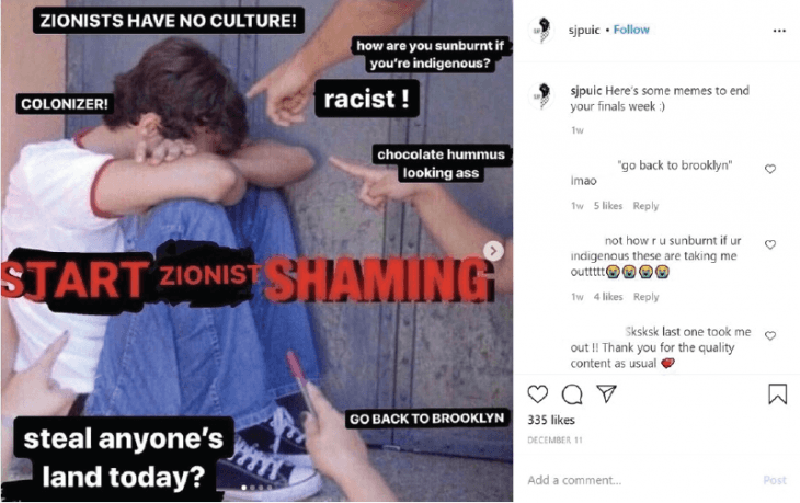 December 2020, University of Illinois, Chicago: SJP posted a meme on their Instagram account that actively encouraged the shaming of Zionists by calling them “colonizer,” “racist,” telling them to “go back to Brooklyn” and more. Such a call is antisemitic as it effectively targets most of the campus Jewish community, which feels a connection with Israel’s existence as the Jewish homeland and it serves to negate the historic Jewish connection to the Land of Israel by asserting Jews belong elsewhere. (In antisemitic incidents in the US – including in Brooklyn – American Jews are often told to “go back to Israel.”) 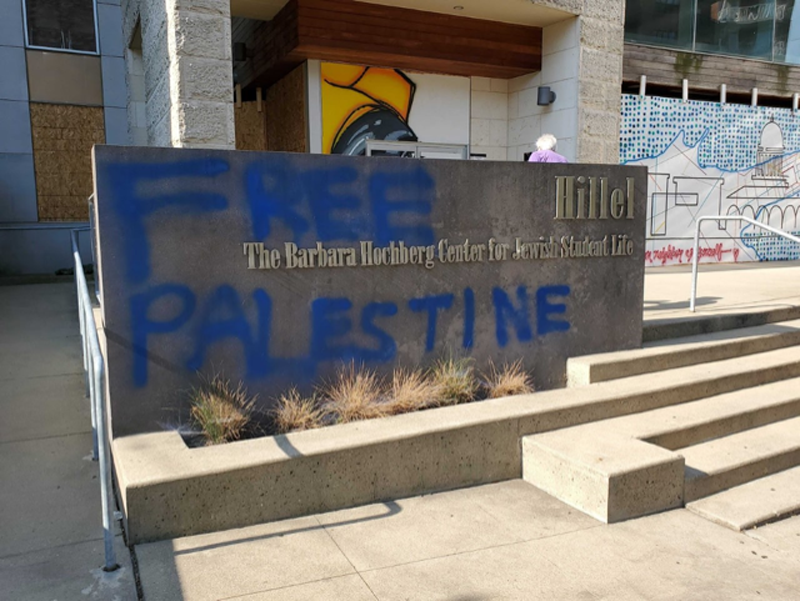 July 2020, University of Wisconsin-Madison: Unknown vandals spray-painted “Free Palestine” on a sign marking the entrance of the Hillel. Such targeting of a center for Jewish life (rather than a political or Israel-specific organization) can be considered antisemitic.

January 2020, Northwestern University: SJP published a letter to the editor in the student newspaper criticizing the establishment of Israel and calling Zionism “a settler colonial project steeped in white supremacist ideology.” It is antisemitic to demonize Zionism as a form of white supremacy, as such a comparison vilifies an integral component of the Jewish identities of the vast majority of Jews. Regardless of intent, such rhetoric could also dangerously conflate most Jews with antisemitic white supremacists, who are currently victimizing Jews at rates not seen for years.