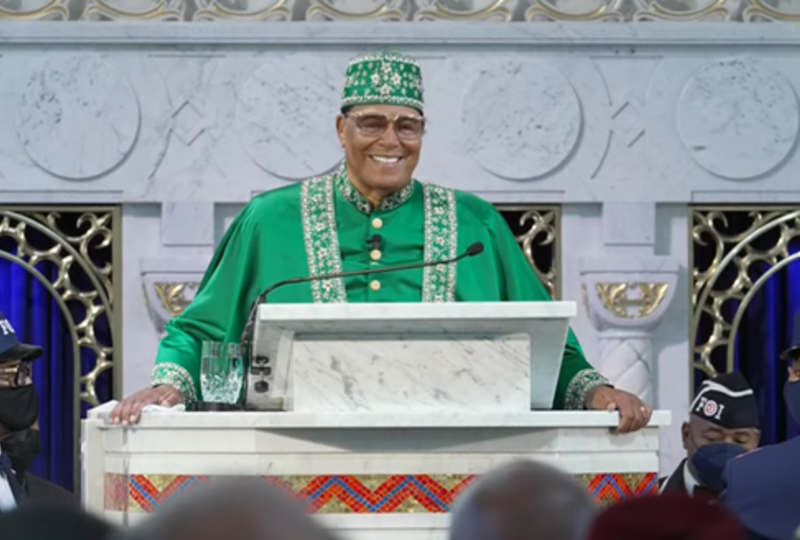 In 2022, Farrakhan again injected antisemitism into his address,  claiming that Jews are the enemy of Jesus and promoting antisemitic tropes about Jewish control. Farrakhan also reiterated the conspiratorial anti-vaccine rhetoric that has characterized the NOI’s response to the coronavirus pandemic. In the weeks leading up to the event, Farrakhan’s speech was advertised as potentially the 88-year-old’s last major public address, though he reassured supporters that he was not retiring.

Likening himself to Jesus, Farrakhan asked the audience gathered at Mosque Maryam in Chicago, “How many of you have the friendship of Jews or the hatred of Jews, where you can’t even say a kind word about me? And you’ve got to answer to them. It’s in the Book of John; the people got afraid to say anything good about Jesus, because the Jews jumped on them. That’s what they did to Nick Cannon. That’s what they did to others who say they love Farrakhan.” Cannon was fired by ViacomCBS in 2020 after he praised Farrakhan and made antisemitic remarks on a podcast episode.

Farrakhan added, “The enemies of Jesus were Jews…They turned away from God and used the skill and wisdom that God gave them to trick people into sin. Now, Satan has to be exposed. The liar has to be exposed.” Farrakhan also made multiple references to “the Jews and their power” throughout the address.

Later in his address, Farrakhan turned his attention to the COVID-19 vaccine, repeating his claim that it is part of a “death plot” designed to cull the Black population around the world. Farrakhan described President Biden as “the chief inviter to death” for Black people, referencing the U.S. government’s efforts to encourage vaccination. Farrakhan noted that he has been deplatformed from social media platforms—such as Facebook, which banned him in 2019 for violating its policies—and praised NOI figures like Student Minister Wesley Muhammad, Brother Rizza Islam, and Brother Ben X for continuing to spread the NOI’s messaging against the vaccine.

Toward the end of Farrakhan’s address, the NOI’s Facebook Live video was also temporarily disabled; at the time it was being watched by approximately 8K viewers. Alternative channels and pages on both YouTube and Facebook continued to livestream the address to thousands of viewers. As many as 20K viewers watched the Rumble video live, while tens of thousands watched on the NOI’s media website. Live translations in six different languages were also available via Zoom.