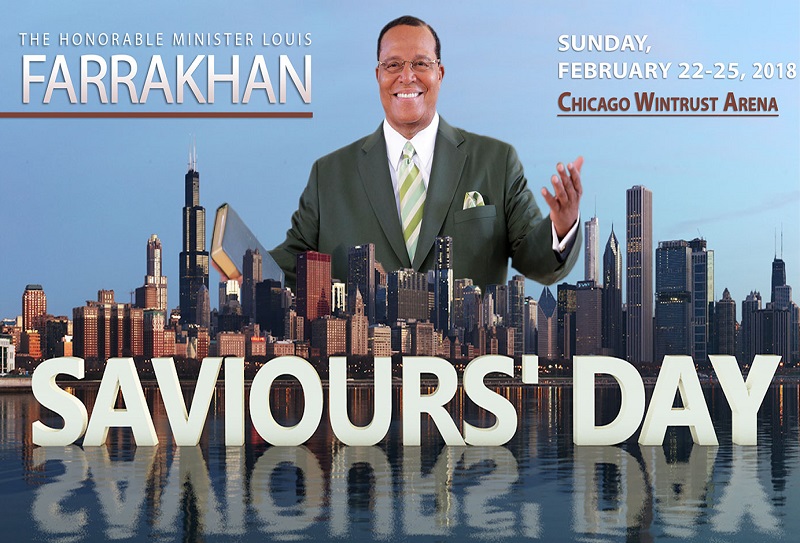 On February 25th, Nation of Islam’s longtime leader Louis Farrakhan spoke at the Wintrust Arena in Chicago.  As in previous Saviours’ Day speeches, Farrakhan used the opportunity to rail against the Jews, Israel and the U.S. government.

Before Farrakhan’s keynote address, fellow Nation of Islam principals Ava Muhammad, Nuri Muhammad and Ishmael Muhammad shared remarks.  In a short speech, Ava Muhammad warned the crowd that the end of days is imminent, and they should heed the words of Farrakhan:

Nuri Muhammad made a financial appeal, and announced that a $5000 donation from longtime Farrakhan ally and music producer Russell Simmons. Ishmael Muhammad, meanwhile, alleged that the Nation of Islam and Farrakhan are “miracles,” since many have tried to stop them:

“If God was not with him and the Nation of Islam we could not have survived the constant and ever increasing assault of the United States government and those who say they are Jews, but are of the Synagogue of Satan.”

Stephanie Mills, who played Dorothy in the original production of “The Wiz” on Broadway, performed a song and praised Farrakhan.  Over the Saviours’ Day weekend, the Nation of Islam released a seven disc, 44-song box set collection of music that includes pieces from Farrakhan, who is a classically trained violinist, accompanied by Mills. Farrakhan and the Nation of Islam claim that Chaka Khan, Snoop Dogg, Damian Marley and Rick Ross, among others, also contributed to the collection.

Farrakhan’s wide-ranging speech lasted for three hours, and touched on a number of issues in the news, including gun violence.

In his opening remarks, he insisted that he is not an anti-Semite, but rather a truth teller, adding that the “powerful Jews are my enemy.” Apparently to illustrate that point, he remarked that when evangelist Billy Graham met with President Nixon, Graham warned Nixon about Jewish power, and told the President he was popular with Jewish voters only because he supported Israel.

Farrakhan views himself as the modern-day Jesus coming to warn “the good Jews,” telling the audience that “Satan is going down. Farrakhan has pulled the cover off the eyes of the Satanic Jew and I’m here to say your time is up, your world is through. You good Jews better separate because the satanic ones will take you to hell with them because that’s where they are headed.”

Farrakhan also promoted the anti-Semitic conspiracy trope that Jews control the government and Hollywood. He told the crowd that the “white people running Mexico are Mexican-Jews,” and went on to say that Ukraine, France, Poland and Germany are controlled by Jews who “take on the culture, the money, the business” of those countries.

He told the audience, “the Jews have control over those agencies of government,” particularly the FBI, and in life “when you want something in this world, the Jew holds the door.” He claimed that Jewish people are the ones responsible for the “degenerate behavior in Hollywood turning men into women and women into men,” and that Jews are “the mother and father of apartheid.” He also promoted the “Pot Plot” conspiracy that the Jews and the US government are manipulating strains of marijuana to feminize black men. “God did not create man to lay with man. But you are being chemically programmed against your nature, you don’t know it.”

He even mentioned the Women’s March, saying that while he thought the event was a good thing, women need to learn how to cook so their husbands don’t become obese. Tamika Mallory, one of the March organizers, was in the audience, and got a special shout-out from Farrakhan.  Mallory posted two Instagram photos from the event, which Carmen Perez, another Women’s March organizer, commented on with “raise the roof” emojis.

The live-stream program ended with Ishmael Muhammad promoting the multiple volumes of the Nation of Islam’s virulently anti-Semitic book series, The Secret History Between Blacks and Jews.