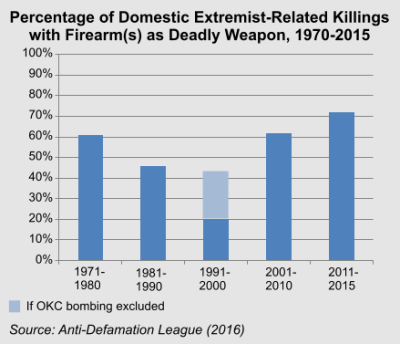 In the popular imagination, the bomb is the weapon typically associated with terrorists or extremists—but in the U.S. extremists seem to be killing more people with firearms than with any other weapon, and that use may be increasing.

It is certainly true that many of the high-profile terrorist attacks in the United States over the past century have been bombings, including the 1919 anarchist bombing campaign, the 1963 16th Street Baptist Church bombing, the 1995 bombing of the Murrah Federal Building in Oklahoma City, and the 2013 Boston Marathon bombing, among many others. Extremist serial bombers such as the Weather Underground, “Unabomber” Ted Kaczynski, and Eric Rudolph have all gotten their share of headlines.

However, extremists use a wide variety of deadly implements to commit their crimes, terrorist-related or otherwise, from fists and boots to airplanes. The most common tool of violence seems to be the simple firearm, a weapon that extremists can use when committing terrorist acts, hate crimes, assassinations, armed robberies, and all manner of traditional crime. In the United States, firearms are easy to obtain and easy to use. American extremists of all possible types, from the far left to the far right, as well as religious extremists, have used firearms to commit deadly acts.

How common is such firearms use in the United States? The Anti-Defamation League’s Center on Extremism examined 890 murders committed by domestic extremists in the United States from 1970 through 2015—both ideological and non-ideological killings by extremist perpetrators—and discovered that around 55% of these killings involved use of a firearm; all other weapons combined made up the other 45%.

This figure signifies both the popularity of firearms among extremist movements in the United States, especially right-wing extremists, as well as the fact that attacks with other types of weapons may be less likely to end in death. Attacks using knives or fists, for example, may possibly result in non-fatal injuries more often than firearms. On the other end of the scale, bombings are more difficult to carry out—with many extremist bombing plots detected and prevented by law enforcement from ever being executed.

When one breaks down the numbers by decade, it appears that, after a dip in the 1980s and 1990s, firearms are becoming more popular than ever as the deadly weapons of choice for American extremists. Not only have the numbers of domestic-extremist related killings in the U.S. increased over the past 20 years, but so too has the frequency of firearms as the weapons in such killings.

In the 1970s, extremists—primarily coming from the far left—used firearms in 61% of domestic extremist-related killings in the United States. Many of these incidents involved members of left-wing extremist groups such as the Black Panthers and the Black Liberation Army attacking police officers.

The percentage of firearms use in extremist-related killings dipped in the 1980s, to only 46%, then dropped drastically in the 1990s, down to 20%. This latter figure is greatly distorted by the Oklahoma City bombing, which itself resulted in 168 deaths, but even if the bombing were left out of the calculations, the new number would only be 42%. There are several reasons that seem to account for these lower figures, including the rise of white supremacist prison gangs committing murders behind bars and the growth of the racist skinhead subculture in the United States, whose adherents often eschewed firearms for beating and stabbing attacks.

However, in the 2000s, firearms once more were the deadly weapons in the majority of killings, with 62% of the killings between 2001 and 2010 involving one or more firearms. So far in the current decade, the percentages are even higher, with 72% of the domestic-extremist related deaths from 2011 through 2015 involving firearms.

What accounts for this increase? Several factors seem to have played a role. One is the increased use of firearms by several extremist movements. Racist skinheads seem to use firearms with greater frequency in the 2000s than they did in earlier decades, while the growth of white supremacist prison gang activity on the streets—as opposed to behind bars—has allowed their members much greater access to and use of firearms.

Even more concerning is the apparent gravitation of domestic Islamic extremists towards firearms as a weapon of choice. In the early years of this movement, following the 2003 U.S. invasion of Iraq, much of the energy of those extremists with violent impulses were directed at elaborate plots involving bombs or even military weapons—plots typically stopped by law enforcement before they could ever be carried out.

Since 2009, however, there have been a number of high-profile incidents in which Islamic extremists have used firearms to conduct shootings (and one instance, the Boston Marathon bombing, where the perpetrators used both bombs and firearms), including shootings at Ft. Hood, Texas; Little Rock, Arkansas; Chattanooga, Tennessee; and San Bernardino, California.

The rise of ISIS in the past several years may have contributed to the increase in attempted small arms attacks; Al Qaeda generally favored high-spectacle and symbolic attacks, whereas ISIS has been more practical, urging adherents to commit any attack they think they can pull off.

Most of the Islamic-related shootings were mass shootings, which may be the final piece of the puzzle. Though most extremist killings continue to take one victim at a time, the number of multiple victims in deadly extremist-related incidents (both ideological and non-ideological) has certainly grown. Since 2001, there have been 24 domestic extremist incidents in which at least three people were killed—and firearms were the weapons used in the vast majority of these cases, including such deadly shooting sprees as the 2012 Wisconsin Sikh temple shooting and the 2015 Charleston church shooting.

The increased number of multiple victim incidents by extremists is also one of the reasons why the death toll has been rising. From extremists on the right such as white supremacists and anti-government extremists to religious extremists such as domestic Islamic extremists, gun violence seems more likely to increase than decrease in the coming months and years