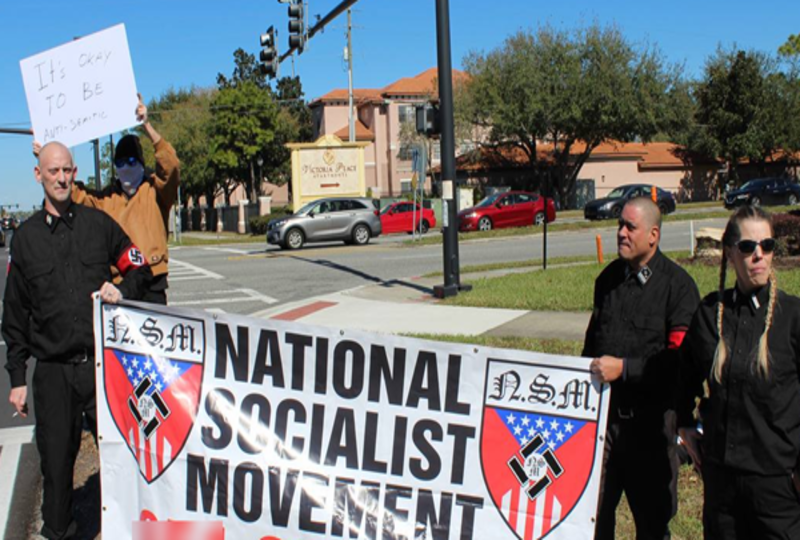 On February 4, 2022, the Orange County (Florida) Sheriff’s Department arrested and charged three participants of a neo-Nazi demonstration in Orlando, Florida, for their alleged role in the January 29, 2022, hate crime assault of David Newstat, who is Jewish.

Newstat, who saw the demonstration and stopped to confront the group, said he was spit on, pepper-sprayed and punched. Video of the altercation, posted to Twitter by a passing motorist, shows Newstat as the demonstrators appear to be punch, kick and spray him with a chemical agent.

The ADL Center on Extremism (COE) was monitoring the neo-Nazi rally at the time of the assault, and COE team members, familiar with many of the demonstrators, helped the Sheriff’s department identify the suspects in the hate crime attack.

Just last month, Burt Colucci, the NSM’s leader since March 2019, was indicted on two counts of misdemeanor disorderly conduct and one count of felony disorderly conduct. Those charges stem from an April 19, 2021, Chandler, Arizona, incident during which Colucci allegedly pointed a handgun at a group of Black people during an argument and sprayed chemical agents into their vehicle.

Jason J. Brown, a Florida-based member of the New Jersey European Heritage Association (NJEHA), has been active with the GDL since at least November 2020. In 2021, he participated in two of the group’s so-called ”Name the Nose” tours including a May tour in Florida, which he helped organize, and an October tour in Texas. He has also attended some of the recent ”White Lives Matter” events in south and central Florida.

The alleged assault linked to the hate crime charge occurred as 16 members and associates of the neo-Nazi National Socialist Movement (NSM) and the antisemitic Goyim Defense League (GDL) gathered in Orlando for the weekend. Participants included individuals from Florida, Indiana, Nevada and Washington. 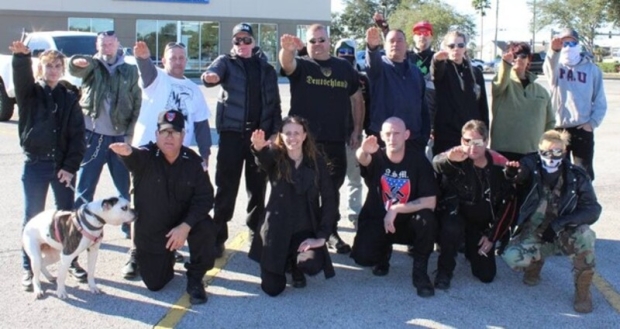 Participants of the January 29 rally

On Saturday, January 29, the group held a roadside rally at the intersection of North Alafaya Trail and Waterford Lakes Parkway in Orlando, during which group members shouted slurs and obscenities at passing motorists and periodically chanted “No more Jews” and “White power” while giving Hitler salutes. They also displayed a banner promoting the NSM, waved neo-Nazi flags and held signs that read, “Jews aren’t White,” “It’s okay to be ANTI-SEMITIC” and “14/88 WHITE UNITY DEFEND OUR HOMELAND.”

On Sunday, the group flew Nazi flags and hung banners from an area overpass that read “VAX THE JEWS” and “Let’s Go Brandon.”