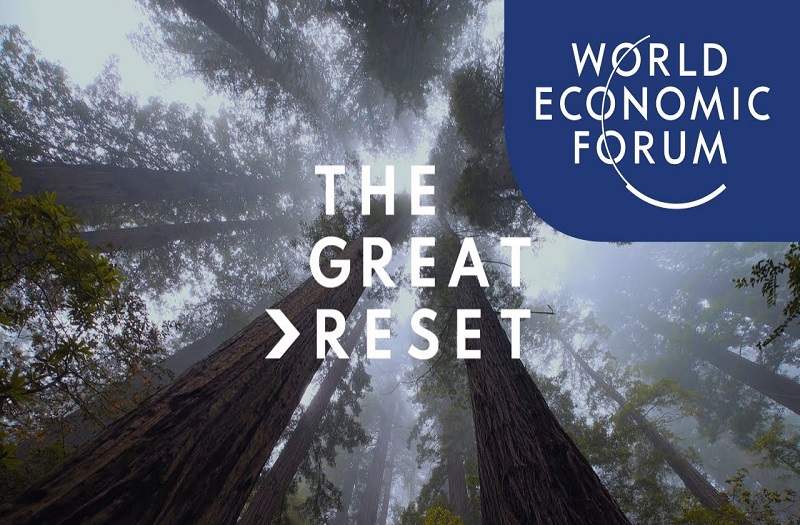 Since first emerging in the spring of 2020, “The Great Reset” conspiracy has gained traction with the ongoing spread of COVID-19 in both mainstream and fringe circles alike. In its most common form, adherents warn that “global elites” will use the pandemic to advance their interests and push forward a globalist plot to destroy American sovereignty and prosperity. However, there are more outlandish and pernicious strains of the conspiracy, and the adoption of this term “Great Reset”—particularly by mainstream figures with large audiences—creates dangerous opportunities for ordinary Americans to be drawn deeper into the world of conspiracies.

References to The Great Reset conspiracy can be found on a range of social media platforms, from mainstream platforms like Twitter, YouTube, to newer platforms like Parler, to more extremist-friendly platforms like Gab and Telegram. Several prominent conservative pundits have also discussed the conspiracy on their television and radio shows.

The conspiracy first surfaced in earnest in June 2020 after the World Economic Forum—the prominent international non-governmental organization behind the annual Davos conference—introduced “The Great Reset” initiative, an effort to reduce global inequality and advance environmental initiatives in the wake of the devastation of the coronavirus.

The Great Reset conspiracy theorists argued that this announcement was proof that global elites want to use the coronavirus as a tool to reorganize global societies and economies to their benefit at the expense of ordinary people, with the ultimate goal of a global totalitarian regime.

In an October 2020 open letter addressed to President Trump that has since become a cornerstone for the Great Reset conspiracy, the Catholic Archbishop Carlo Maria Vigano wrote:

“A global plan called the Great Reset is underway. Its architect is a global élite that wants to subdue all of humanity, imposing coercive measures with which to drastically limit individual freedoms and those of entire populations. In several nations this plan has already been approved and financed; in others it is still in an early stage. Behind the world leaders who are the accomplices and executors of this infernal project, there are unscrupulous characters who finance the World Economic Forum and Event 201, promoting their agenda.”

Vigano, a controversial Catholic leader who has spent the last several years mired in a series of controversies surrounding sex abuse allegations in the Catholic Church, paints a bleak portrait of the future, one where elites use promises of universal incomes and debt cancellation to impose a “health dictatorship aiming at the imposition of liberticidal measures” and demand the “renunciation of private property and adherence to a program of vaccination against Covid-19 and Covid-21.” Those who refuse will be “confined in detention camps or placed under house arrest, and all their assets will be confiscated.”

While the conspiracy transcends American politics, unsurprisingly some of the theory’s supporters have weaponized it against the incoming Biden administration, warning that it will be used to usher in radical changes, including using the coronavirus as a pretense to impose lockdown measures, destroying small businesses and weakening the economy, stripping away people’s freedoms, increasing mass surveillance and forcing vaccines on Americans. Similar to QAnon adherents, many Great Reset believers cast President Trump as the only person between the American people and these disastrous outcomes.

On November 16, the Great Reset began to trend on Twitter with nearly 80,000 tweets, many of which included a video of Canadian Prime Minister Justin Trudeau speaking during a United Nations video conference in September, saying that the pandemic provides an opportunity for a reset, “to accelerate our pre-pandemic efforts to re-imagine economic systems that actually address global challenges like extreme poverty, inequality, and climate change.” He also uses the phrase, “building back better,” which theorists connected to Biden’s campaign slogan, “Build Back Better,” and used as evidence that the two are collaborating in the conspiracy. By late December, Twitter activity around the Great Reset had diminished somewhat, but the phrase was still showing up in at least 1,000 tweets per day. 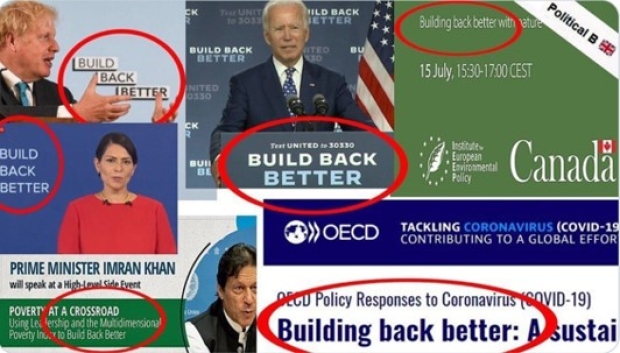 One can see long-standing and familiar right-wing conspiracy tropes at play in the Great Reset conspiracy, including the notion that a group of elites are working to undermine national sovereignty and individual freedoms, references to a “New World Order,” and the idea that these malicious actors will seek to exploit a catastrophic incident—like a global pandemic—to advance their agenda. A common undercurrent among proponents is a mistrust of vaccines, which they believe will be forced upon people to fulfill the nefarious objectives of Bill Gates or the pharmaceutical industry.

There are strains of the conspiracy that also delve into darker territory. Some have alleged that the WEF and global elites are engaged in a transhuman project, in which humans will be fused with machines and forced to be subservient to elites. As conspiracy theorist Spiro Skournas says in a video that has been viewed more than 400,000 times on YouTube and BitChute:

“This is not about saving the planet, this is not about equality, this is about control…They want to redefine what it means to be human and determine for you your role and your future of being essentially a transhumanist cyborg integrated into this new control grid…where we will be unable to distinguish organic life from artificial. We won’t even have access to our own thoughts or we’ll have access to them, but we won’t even be able to control our own thoughts and emotions because they’re going to do that for us because we’re going to be tied into their grid system.”

Similar fears have been expressed on a variety of far-right and conspiracy-oriented websites.

While many posit that the Great Reset is the function of global elites capitalizing on this particular moment, some have gone a step further: Andrew Anglin, who runs the Neo-Nazi website the Daily Stormer, alleged in a November 11 article published on the site that the coronavirus was “manufactured in order to introduce this new global system.” His theory -- that the virus is not only being taken advantage of by “global elites” but was purposefully created by them -- has provoked even more dangerous rhetoric in extremist spaces.

Usage of the Great Reset to Espouse Antisemitism

As is so often the case with conspiracy theories, one can find antisemitic sentiments in the Great Reset, with some believers going so far as to accuse Jews of orchestrating the plot or invoking George Soros and the Rothschild family. In a video posted on December 6 that has since been viewed more than 17,000 times, antisemitic conspiracy theorist Adam Green of Know More News asserts that the World Economic Forum is controlled by Jews who are using the Great Reset as part of a plan to “set up a Zionist, Noahide, One World Government according to the prophecies.” He adds, “the Great Reset is totally tied in with all of this.”

Rick Wiles, the antisemitic host of the TruNews streaming media platform, also applied an antisemitic gloss to the Great Reset conspiracy theory. In an October 30 stream that has been viewed on Facebook alone over 57,000 times, Wiles warned that the “Globalist Great Reset” is a “plot to overthrow freedom and imprison Christians around the globe.” After reading from Archbishop Vigano’s letter about the Great Reset (described above), Wiles elaborated on Vigano’s contention that the Pope may be colluding in the plot. Wiles said: “And what ranks did Pope Francis come from? The Jesuits. And if you get to the Jesuits, you're now talking freemasonry. And if you're talking freemasonry, you're talking about the Zionists…It's all one group. Satan's got different denominations."

Rhetoric such as this can easily be found across social media platforms. For example, one Twitter user wrote on December 6: “The NWO [New World Order] will come from the communist controlled east via Perestroika deception. Once the US collapses, a Eurasian centered Jewish world government will come. Great reset managed by Jews.” Similarly, a Telegram user wrote: “When people get angry tell them that the enemy behind this Great Reset garbage is the World Economic Forum. Reminder that Klaus Schwab is a mamzer who comes from a Rothschild banker family.”

Beyond conspiracy theorists lurking on the internet, the Great Reset conspiracy has also been propagated by influential conservative pundits. Though these figures differ in how they engage with the conspiracy—for example, in speculating about who is responsible and just how apocalyptic the Great Reset will be—they are all disseminating variations of the conspiracy to their sizeable audiences, giving it a veneer of legitimacy and spreading fear regarding future actions by the Biden administration and other “elites.” They are particularly focused on any potential response to the coronavirus pandemic.

Here are some examples of influential public figures who have boosted “The Great Reset” conspiracy theory:

The popularization of the Great Reset is yet another example of the recent rise of conspiracy theories, which continue to establish footholds on mainstream social media channels. When left unchecked, conspiracies like the Great Reset carry the risk of undermining faith in democratic institutions by casting its leaders as part of a globalist plot and can even lead to further threats of violence against government officials.