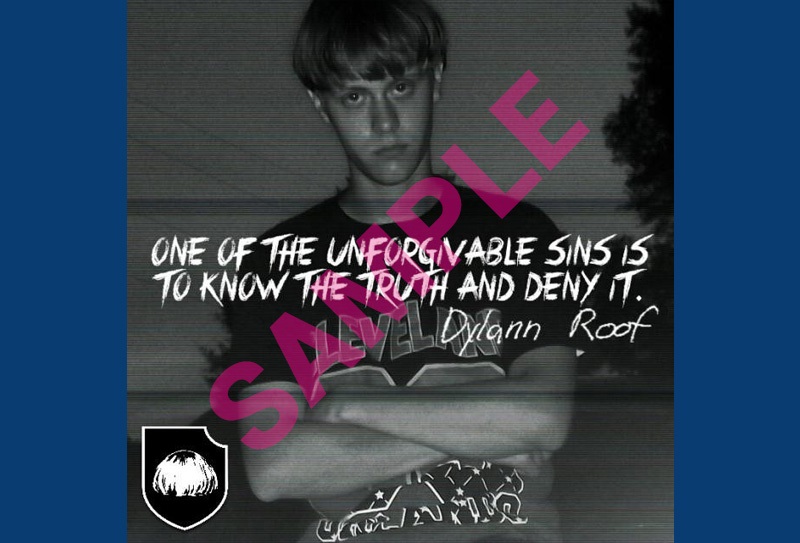 When Dylann Roof murdered nine people in a racially motivated shooting spree at the Emanuel African Methodist Episcopal Church in Charleston, South Carolina, in 2015, reactions from fellow white supremacists were all over the map. While some praised the shootings, others claimed the attack was fabricated by the government or Jews to cast a bad light on white supremacists.  Some criticized Roof, believing he would attract negative publicity and unwelcome law enforcement attention to their movement.  One writer for the racist website Occidental Dissent even called it a “terrible, cowardly act of mass murder.” Since the killings, however, a growing number of people are praising Roof because he committed mass murder. Within the past two years, a number of zealous Roof fans and would-be copycats have emerged, including some who have crossed the line into criminal activity: Some white supremacists still condemn Roof’s actions, typically for tactical rather than moral reasons. One poster on 4chan claimed in June 2018 that Roof “betrayed my race” by making whites look bad. In November another white supremacist claimed that supporting Roof was “garbage” that could “only hurt our cause.”

Increasingly, however, such voices are being drowned out by white supremacists actively promoting Roof as a hero. One white supremacist meme posted to 4chan in March 2018 referred to Roof as “the hero of Charleston…who singlehandedly…took down 9 wild dindu nuffins…at their weekly racist rally disguised as a church meeting.”  The phrase “dindu nuffin” is a racist slang term that refers to African-Americans. In 2018, one Gab user, #NSFW LeeLee, quoted long-time white supremacist Kevin Strom on Roof: “Dylann Roof’s actions were inevitable because our race still produces men of honor, and men of honor do not go gentle into that good night.”

Andrew Anglin, who runs the white supremacist Daily Stormer website, has consistently supported Roof (“DyRo,” as the Daily Stormer likes to refer to him), featuring him in numerous articles.  Daily Stormer readers are also fans.  One commenter on the site described Roof in 2017 as “an intelligent, self-respecting and sane white man” who was “inspired by the dystopian and clearly anti-white animus that’s now permeating the world.”  Later in 2017 another Daily Stormer commenter promised Roof he would “give you a medal and erect a monument to you in our future all-white nation.”

The most extensive and energetic promotion of Roof as a hero has emerged from a group of white supremacists active on Gab, Discord and other social media sites; they are dedicated not only to praising Roof but also to turning him into an object of adulation. The most active core of these supporters is comprised of 40-50 people.  While their campaign has a veneer of mocking humor—as evidenced by repeated references to Roof’s unusual bowl haircut—the underlying purpose is deadly serious: to promote Roof’s extreme violence as worthy of praise and even emulation.

Collectively, these Roof supporters refer to themselves as the “Bowl Gang,” the “Bowl Patrol” and “Bowlwaffen” or “Bowlwaffen Division.” Many individuals among them also adopt pseudonyms and screen names that use “bowl” references, such as “Tactical_Bowlcut,” “The Final Bowlution,” “Bowltrash,” and “TheBowlfather.” Jeffrey Clark, the white supremacist arrested in Washington, D.C., on weapons charges, was a member of this group; he used the screen name “DC Bowl Gang.” Members might even refer to each other as “bowlther,” a combination of “bowl” and “brother.”  Roof himself is often referred to as “Saint Roof.”

Members of the Bowl Gang have developed Roof-related terms and phrases that they use to express and disseminate their adulation.  One of the most important is the phrase “Take the bowl pill,” a variation on commonly used fringe references to being “pilled.” Derived from a scene in the movie The Matrix, “taking the red pill” or “red pilling” became a common term on white supremacist and other extremist sites referring to being opened to the truth of whatever extreme movement is using the term.  Bowl Gang members may urge others to “take the bowl pill” or refer to someone as being “based and bowl pilled.”

Bowl Gang members also use terms like “Disrespect the bowl, pay the toll” and “Dylann Roof did nothing wrong.” Although most of their activity is online, in November 2017, white supremacists hung a “Dylann Roof did nothing wrong” poster at a Sacramento-area synagogue.  Perhaps the most chilling Bowl Gang slang term is “take me to church” and “take them to church,” both references to Roof’s killing spree in Charleston. The former implies a willingness to personally engage in violence while the latter implies that violence should be committed against a particular group of people.  For example, one Gab account using the screen name Bowlseph Smith declared that “I’m part of the #BowlPatrol.  Here at the Bowl Gang we take the subject of #Ni**erDeath seriously (take ‘em to church!).”

Bowl Gang members share Roof-related memes on a variety of online forums.  Many depict images of Roof—often with some sort of halo around his head to depict him as a saintly figure—but perhaps even more common are memes featuring Roof’s bowl haircut, either as images of the hair on its own or digitally affixed to other people’s heads.  In one such image, the haircut was superimposed on a shield designed to resemble the divisional insignia of the Waffen SS military units of Nazi Germany.  And in one attention-getting scheme, a leading Bowl Gang member used an online t-shirt company to market a t-shirt featuring the haircut image and the phrase “Keep Calm and Roof On.” The shirt was pulled from the site after attracting media attention.

Siege, a collection of essays written by neo-Nazi James Mason, plays a significant role in the promotion of Roof as a hero. After years of relative obscurity among white supremacists, Mason’s work has been revived in recent years thanks to promotion by the neo-Nazi group Atomwaffen, which draws inspiration from Siege and Mason.  White supremacists who consider Roof a hero often urge others to “Read Siege.”

Mason is significant because he explicitly advocated not only for violence but for lone wolf violence in particular, claiming in a 1981 Siege essay that “if a revolution were ever sparked in this country, it would be done by one, lone incident that had all the dimensions necessary to catch fire and spread in all directions at once.”  In fact, Mason hoped for waves of assassinations and mass murders (“noble violence”) that would destroy the “system” Mason believed was seeking to annihilate the white race.

Controversially among white supremacists, Mason supported infamous killer Charles Manson and his followers (often known as “the Family”) based on their willingness to kill, and Manson’s vision of a future race war between whites and blacks (which Manson dubbed “Helter Skelter.”)  Mason’s other idol, neo-Nazi George Lincoln Rockwell, also warned of a coming race war.

It’s easy to see why Mason-influenced Bowl Gang members sing Roof’s praises so highly; Roof was a lone-wolf killer who believed a race war was on the horizon.  Bowl Gang members have praised other extremist killers and terrorists, including Robert Mathews, Joseph Paul Franklin, Timothy McVeigh and Anders Behring Breivik, often referring to them as “saints,” just as they do with Roof. Robert Bowers, who killed 11 people at a Pittsburgh synagogue in October 2018, is the most recent addition to their pantheon. The unofficial leader of the Bowl Gang, a white supremacist who uses the pseudonym “Vic Mackey,” even created a Roof-related hashtag to describe Bowers’ shooting spree:  #TakeThemToChurch2TheYiddening.

The Bowlcast and Calls for Violence

“Vic Mackey,” who created much of the slang language and many of the memes designed to promote Roof, also launched an irregularly scheduled podcast in May 2017 dubbed “The Bowlcast.” It has aired a handful of episodes to date.  In these podcasts, “Vic Mackey” and various Bowl Gang members are able to discuss subjects such as violence more explicitly than they can on most other platforms—even Gab, where a number of posts and accounts advocating violence were deleted as part of a crackdown in the wake of (Gab user) Bowers’ massacre in Pittsburgh.

Taking their cues from Siege, Bowlcast hosts praise Roof and others like him as examples of people whose violence can help destroy the system and bring about the final war that many Bowl Gang adherents embrace. “You’re either going to see chaos in front of you and you don’t do anything about it,” claimed “Tactical Bowlcut” on the third episode of the podcast, “or you’re going to see chaos and you want to commit more of it.  Keep this light alive and go and do it and make it happen.”

“Vic Mackey” agreed: “There will be no shelter in Helter Skelter. I pray for that every day. Every morning waking up I just think it’s the race war, it’s Helter Skelter.”  Vic Mackey” and another participant also talked about being “ready to go to church.” Added “Vic Mackey:” “Those nine n-----s being taken to church was just one of the many preludes to this.”

In the fourth Bowlcast episode, released shortly before the 2018 midterm elections, co-host “Gadsden” opined that “if every white man was like Dylann Roof or Robert Bowers or Joseph Paul Franklin, we wouldn’t be in this mess.”

“Vic Mackey” was more expansive.  “I’m not going to say everyone needs to do that…There are so many nice little easy legal ways to ramp up racial tension in your region.”

“Gadsden” wasn’t convinced.  “You know what I’m voting for? I’m voting for Senator Rope and Congressman Lamp Post,” he said, making a reference to lynching.  “Then for president, I’m voting rope and lamp posts, president and vice president.”