Social media platforms have received the lion’s share of attention for enabling users to spread hate and disinformation and plan and incite violence and terrorist acts. Flying under the radar are infrastructure providers like Epik, a domain registrar and web hosting company that works with nearly 750,000 websites and is ranked among the 50 largest web hosts. A domain is the address of a website you type into the URL bar of an internet browser. Domain registrars are companies that sell and manage unique domain names. Web hosting companies provide storage for a website’s files. A useful analogy is to think of a domain as the address of a home and the web host as the actual house. Infrastructure providers such as Epik—payment processors, cybersecurity companies—enable websites to be able to operate, much as roads and bridges allow people to travel from one place to another.

While some companies at the infrastructure level have acknowledged a level of responsibility for addressing abuse of their services—for example, this framework by domain registrars signed by leading companies such as GoDaddy, Tucows and Amazon—Epik is not among them.

In fact, Epik has been called the “right wing’s best online friend.” After Radio Wehrwolf, a podcast network popular among neo-Nazis, was shut down by its web host for violating its terms of service, it found a new home at Epik a few weeks later. Epik is also the registrar for Infowars, the website of notorious conspiracy theorist Alex Jones that Facebook, YouTube and Apple have banned. Mr. Jones has claimed that the Sandy Hook shooting was a hoax, among other conspiracies.

Epik posted a three-page letter on January 11 denying it had been in talks to provide services to Parler, the social media platform lawmakers say played a role in the planning of the insurrection. Apple, Google, Amazon and many other companies declined to do business with Parler in the wake of the attack, forcing the platform offline. Epik’s letter railed against the power of “Big Tech,” the dangers of deplatforming and claimed “countering extremism and isolation with love works!” And days after Epik published its letter, reports surfaced that the company was Parler’s new registrar. As of this writing, Parler is back online with Epik still providing registrar services to the platform.

Founded in 2009 by Rob Monster, Epik bills itself as “the Swiss Bank of Domains." After one of the worst mass murders in recent history, Mr. Monster posted on Gab (more on Gab below) that he had uploaded the Christchurch mosque shooter's manifesto onto the Interplanetary File System (IPFS), only 24 hours after the attack. The IPFS is a distributed file storage system designed to be censorship-resistant. Taking down files from IPFS is almost impossible because they are split into many pieces, with each portion distributed among many participants on the network. Megan Squire, professor of computer science at Elon University, writes that such technology will make it much harder for documents like the manifesto to be tracked online and deleted to prevent people from sharing them widely. 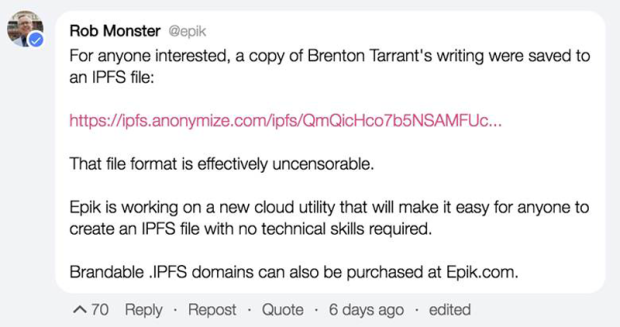 Mr. Monster also spread misinformation about the attack, publicly doubting the veracity of the livestreamed video of the Christchurch shootings and suggesting the terrorist attack was a hoax.  In January 2019, Mr. Monster appeared on a white nationalist podcast and praised former Ku Klux Klan leader David Duke as “a pretty clever guy.”

While it is unclear how many of Epik’s clients are involved in hateful or extremist activities, it is clear that Mr. Monster’s public statements align with some of those who use the company’s services. The following companies receive services from Epik while also having clear links to hateful and extremist content.

Founded in 2016, Gab is a social media platform that has shown time and again its aversion to addressing extremist use of its service. Gab was forced to move from web host GoDaddy to Epik following the platform’s association with the 2018 murder of 11 Jewish people at the Tree of Life Synagogue in Pittsburgh. The killer’s final words before the attack were posted on Gab, which arguably played a role in radicalizing him. In addition to being rife with antisemitic content, Gab allowed the shooter to connect to other extremists who supported, if not motivated him. As part of Gab’s transfer from GoDaddy, Epik published a post that explained why it welcomed Gab to its service. Mr. Monster wrote of Gab CEO Andrew Torba: “I have no doubt that Andrew will continue to develop not only as a tech entrepreneur but also as a responsible steward—one that can balance bravado with diplomacy and who tempers courage with humility.”

In a June 2020 interview Mr. Torba did with Peter Brimelow, the founder of VDare, a racist anti-immigrant site, he said hate speech “does not exist.” ADL’s recent open letter to the U.S. Justice Department, asking it to investigate Gab’s role in the attack on the Capitol, noted Mr. Torba’s activity on his platform:

According to Whois, Epik is the domain registrar for the video sharing platform BitChute. Founded in 2017, BitChute is a video hosting service that was created in response to YouTube’s decisions to increase content moderation on its platform. Ray Vahey, BitChute’s founder, described its creation in an interview around the time of the site’s launch in 2017: “The idea comes from seeing the increased levels of censorship by the large social media platforms in the last couple of years...and, wanting to do something about it.”

ADL’s investigation of BitChute in August 2020 found it to be a hotbed of extremism and hate. The white supremacist group Patriot Front has three BitChute channels it uses to spread its propaganda and provide links to the group’s Telegram and Gab accounts. The Proud Boys, a right-wing extremist group known for its misogyny, islamophobia, transphobia and anti-immigrant beliefs, has a channel with 1.5 million views and 297 videos. Other examples of channels and videos engaging in antisemitism, racism, homophobia and Nazism can be easily found.

Epik has gone beyond merely hosting Bitchute—it praises the website. On May 13, 2020, Mr. Monster took to his Twitter account to praise the BitChute team and express Epik’s support for its service: “The more heavy-handed the mainstream censorship, the faster the @bitchute audience grows. @EpikDotCom is happy to empower you.”

While Gab and Parler have received substantial media attention, Ben Horne, an assistant professor of information sciences at the University of Tennessee at Knoxville, says BitChute is underreported even though it has higher web traffic than Gab.

Mr. Horne co-authored a study that found there was far more hate speech on BitChute than Gab, much of it antisemitic. Mr. Horne said his team discovered recruitment videos with encrypted email links posted by terrorist groups.

Epik provides registrar and hosting services to America.win, formerly Thedonald.win. America.win is a pro-Donald Trump discussion forum created in November 2019 by members of the forum R/TheDonald following its ban from the Reddit platform. It was reported that law enforcement has identified America.win as an “important online staging ground” for the insurrection at the Capitol. ADL investigators found comment threads on America.win where users called for violence, repeatedly mentioned arming themselves for the event and offered advice on the type of equipment that attendees could bring to take hostages. One comment found by our investigators stated, “Don't forget zip ties, rope and duck [sic] tape. I always see this overlooked. Also I would pay big money to see some runners sprinting into the front line with slip knots and/or Carabiners. Once latched to the enemy give the signal and some good old boys reel them in to your side. There's literally nothing the other side could do about it. Bonus points if someone can lasso and is just picking them off.”

According to the Wall Street Journal, Epik is in talks with America.win to address the hate and violence it shares on the platform or risk suspension of services. The senior vice president of communications at Epik recently said, “They need to recognize the critical role they play as an inspirational place rather than a hotbed of extremism.” Below is an example of the content that was posted on this platform related to the attack on the U.S. Capitol. 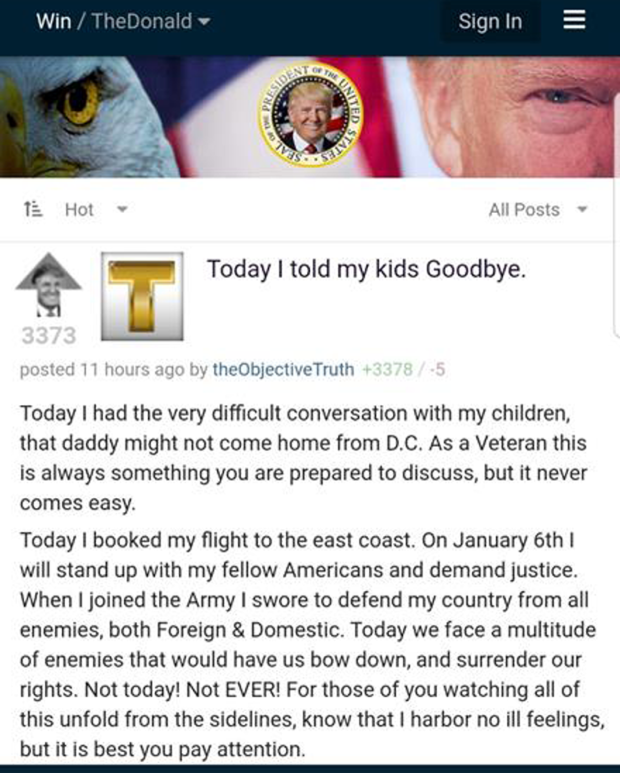 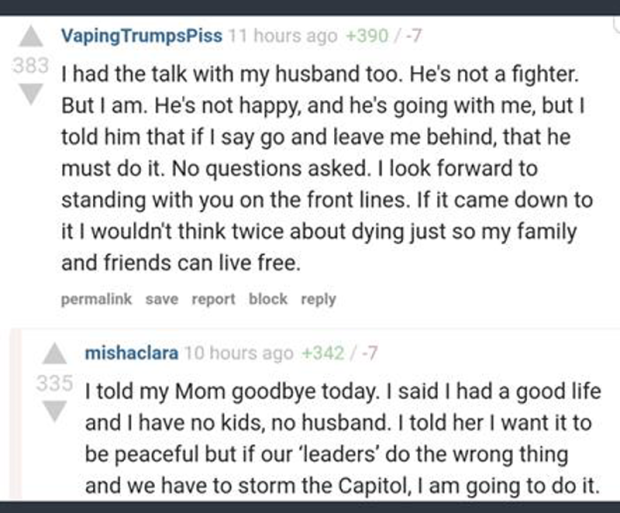 Occasionally, Epik has revoked its services to platforms embroiled in violence. Following the mass murder of 23 people in El Paso, Texas in 2019 by a white supremacist who railed against non-white immigration, Epik decided to terminate web hosting services to 8kun, previously known as 8chan, a platform frequented by extremists and where the shooter posted his manifesto. While Epik’s statement indicated that it terminated services due to 8chan lacking the necessary resources to moderate hate and violence on its platform, Epik took this action only after it was cut off from Voxility, a hardware vendor that leased servers to Epik.

Epik’s efforts to address the abuse of its services by extremists and hateful actors have been scant. In 2019, Mr. Monster wrote of the neo-Nazi Web The Daily Stormer, “As for Stormer, they actually never paid us a penny. In August we discontinued the free plans. Stormer, like any other client, had the opportunity to secure a paid plan. They chose to overlook those opportunities which were proactively presented with ample opportunity.”

The Daily Stormer is white supremacist Andrew Anglin’s extremist website and message board that has been implicated in numerous incidents of violent harassment from 2016 to 2019. These incidents include attacks on Jewish real estate agent Tanya Gersh, American University’s first Black female student body president Taylor Dumpson, American Muslim comedian Dean Obeidallah and others. Epik’s decision to stop hosting the website appeared to have nothing to do with these well-documented attacks but, instead, resulted from The Daily Stormer not transitioning to a paid service plan.