In Iran, Holocaust Denial and Mockery are Alive and Well

Despite the international community’s reengagement with a more “open” and “moderate” Iran, some things in Iranian society haven’t changed, including the prevalence of Holocaust mockery and denial. While President Rouhani hasn’t touted the issue like his predecessor Ahmadinejad had, recent announcements indicate that the questioning of the Holocaust is very much alive and well within Iranian society.

In December, the Tehran International Cartoon Biennial announced an international Holocaust cartoon contest, with the winning entry getting a $50,000 reward. Now, the Islamic Association of the University of Isfahan has announced that it will hold its own Holocaust cartoon contest. The Islamic Association held a similar contest in 2015. In announcing this year’s contest, the Islamic Association explained that its goal is to demonstrate sympathy with oppressed Palestinians and show hatred towards the Zionist regime and “the child killer Israel.” The organizers claim the contest is “not anti-Semitic,” but rather an effort to question such a disgraceful and false phenomenon – the Holocaust - something which no one in the Western world dares to do. 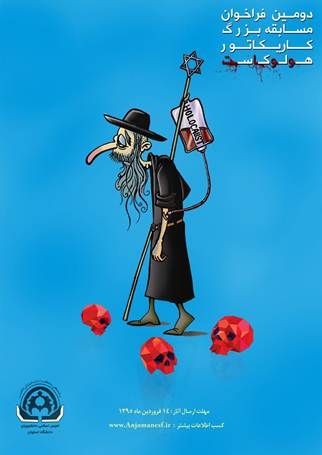 They also claim their goal is to empower talented individuals with skills they can use to educate students and others about the fallacy of the Holocaust.

Additionally, a recent confab for NGOs including social service agencies in an unnamed Iranian city titled “The International Conference on Cooperation and Humanitarian Aids”, which included a session promoting Holocaust denial. A report published following the session stated that there is “no proof for Zionist claims about the Holocaust and Jews.” Mohammad Javad Khosrave, a Holocaust “expert” and Emad Najar, Zionist and Media “expert”, were among the attendees.