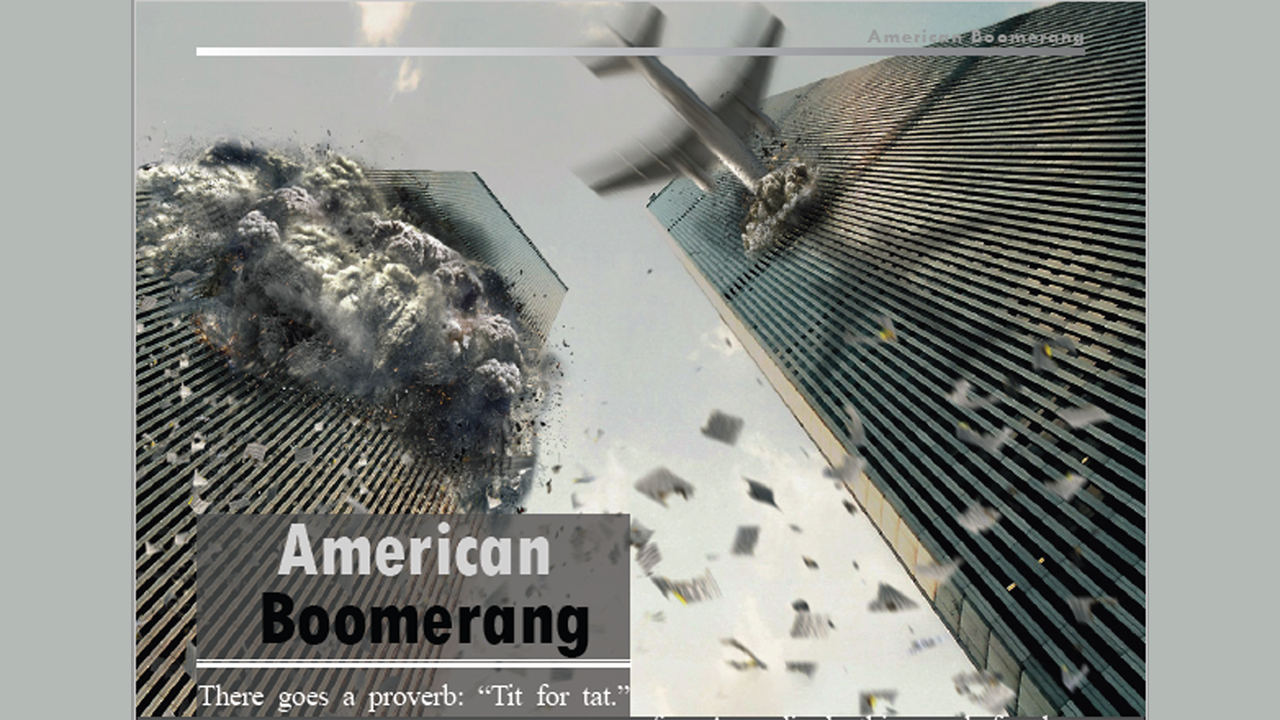 Cover of "American Boomerang," an article in the 10th issue of the Voice of Khurasan magazine.

Islamist extremists online are taking note of three new English language publications—two linked to Al Qaeda and one from ISIS. All three magazines are positioned to fill the void left by the dissolution of Al Qaeda’s notorious Inspire magazine.

Founded by American jihadist Anwar al Awlaki, Inspire quickly gained the attention of Islamist extremists and the researchers who monitor them. The first English-language, Western-focused jihadist magazine, Inspire included religious screeds, commentary on current events, and incitement to lone wolves to commit attacks. It also gave detailed instructions for how to carry them out. One of the most notorious articles, “How to Build a Bomb in the Kitchen of Your Mom,” featured recipes for explosive ordnances made from common household chemicals.

After a U.S. drone strike killed Anwar al Awlaki and counterterrorism efforts both online and in the real world pushed Al Qaeda and its ilk into relative obscurity, the publishing of Inspire became sporadic and mostly trailed off. The most recent editions were published in August 2017 and June 2021.

Apparently sensing an opportunity, entrepreneurial ISIS and Al Qaeda supporters have created new publications, the most consistent and influential of which are:

These three publications appeal to younger extremists who may not have a formal affiliation with an extremist group but are sympathetic to the missions of both ISIS and Al Qaeda. These individuals represent a particularly acute threat, in part because they may have no intent to act on those beliefs absent of encouragement from these publications, and their limited interactions with extremist groups online makes it easier for them to remain undetected by law enforcement. 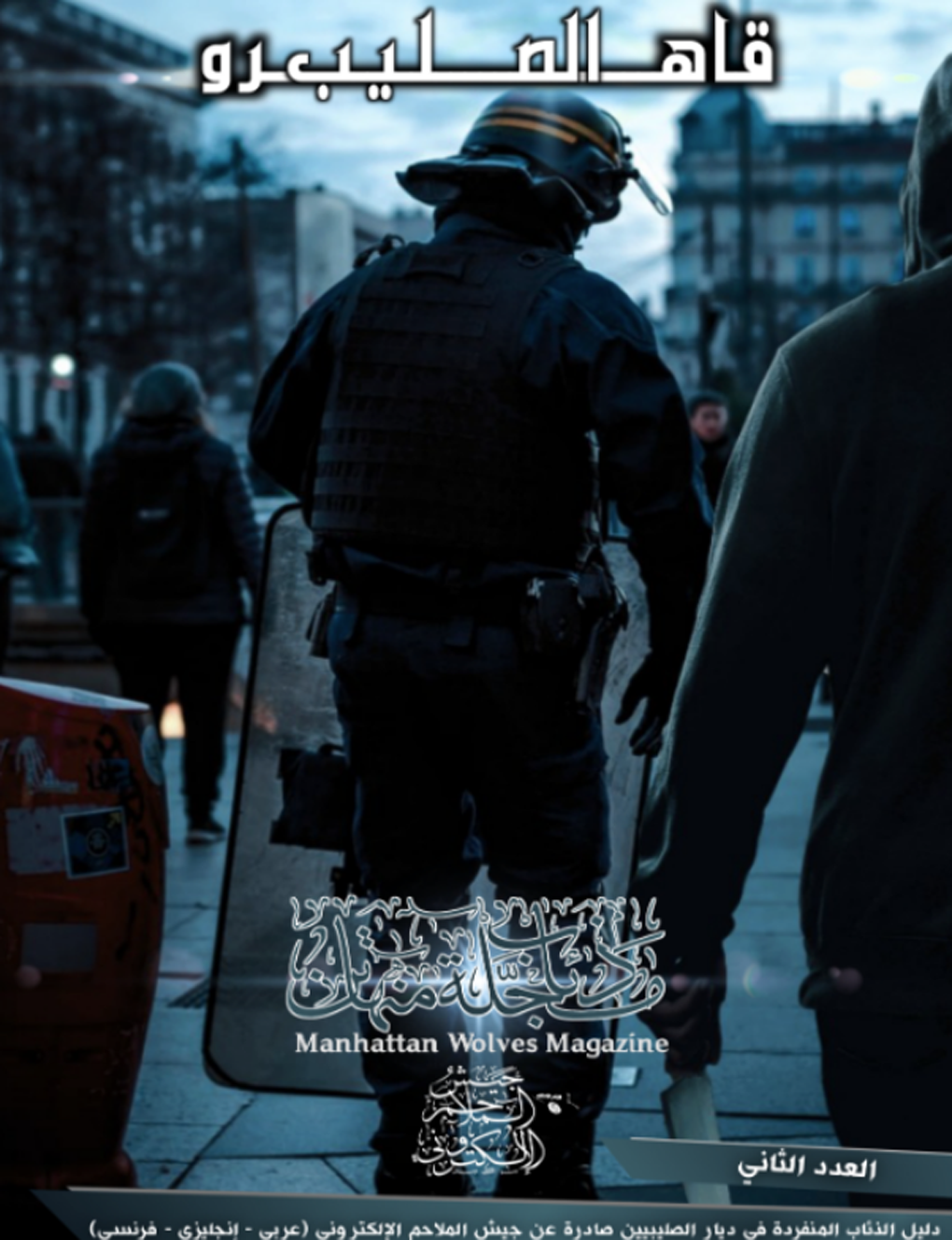 The Wolves of Manhattan magazine is published by a group called Jaysh al Malahim al Electroni (Electronic Battle Army), which is associated with AQAP. The “Manhattan” in the title refers to the 9/11 attacks, a model for the scale of violence the group hopes to inspire. The size of Electronic Battle Army is not clear, but they claim to contribute to at least two other extremist propaganda outlets. The magazine first emerged in early 2020, publishes in Arabic, English and French, and exists explicitly and exclusively to incite violence in the West.

Among Al Qaeda’s regional affiliates, AQAP has been the branch most dedicated to conducting terrorist attacks in the West. Anwar al Awlaki, a major terrorist recruiter and the founder of Inspire magazine, traveled to Yemen to join the group and recruited many Americans to the cause. The last individual to successfully enter the U.S. to carry out a terrorist attack, Mohammed Saeed al Shamrani, was an AQAP operative. Wolves of Manhattan hopes to inspire others to carry on that tradition. When asked by Aymen al Tamimi, an extremism researcher, about the goal of the publication, the editorial director responded, “There is no doubt that we strive, encourage and call on the heroic youth of our Ummah living in the Abode of the Cross to disturb the living of the Crusaders and target them with all we can, through poisons, explosives and silencers, to turn their joys into orphanages.”

The magazine goes a step beyond the typical provocations of Al Qaeda media. Alongside the usual reminders of the glory of jihad and its promise of heaven for the killed terrorist, the second issue of Wolves of Manhattan offered a material enticement; a $10,000 Bitcoin reward for anyone who could prove he had murdered a police officer. While it is doubtful the group truly had the funds to pay it out, the tactic was a cynical break from Al Qaeda’s standard propaganda which leans on religious and moral calls to action.

Mujahideen in the West 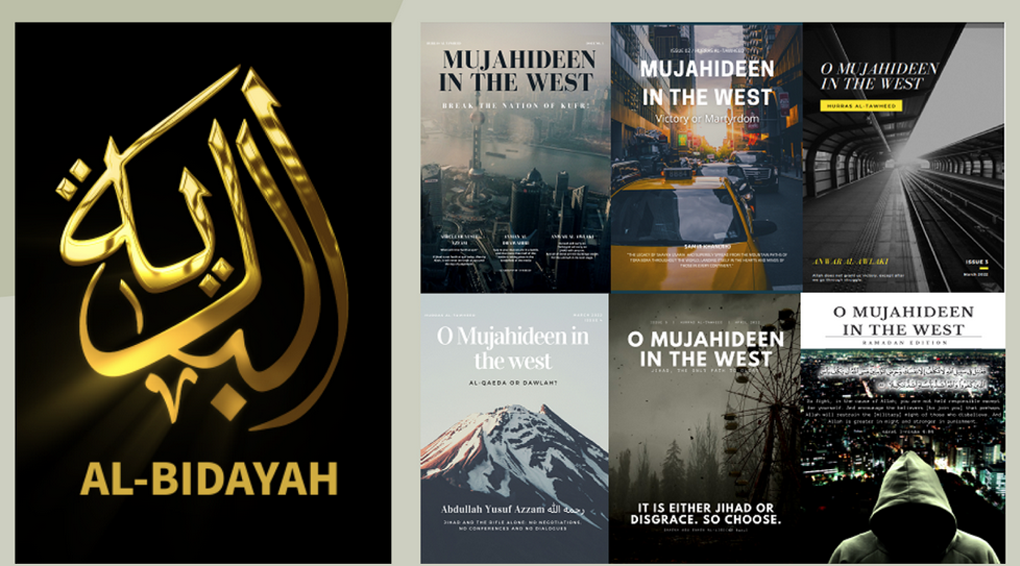 Mujahideen in the West magazine is produced by Abu Yahya al Khurasani, who is the head of an online extremist group called Hurras al Tawheed, meaning Supporters of Unity. Abu Yahya promotes his group on Al Qaeda platforms.

Mujahideen in the West is written in English and aimed explicitly at Islamist extremists already living in the U.S. and Europe. Every edition contains recriminations against the bias and brutality of the West, multiple calls to action for the reader, and instructions for how to successfully murder as many Westerners as possible. These instructions have included brewing tear gas, homemade napalm, and how to kill most efficiently with a knife. There have been six editions of the magazine thus far: the most recent issue came out in May.

In an interview with extremist researcher Tore Hamming, Abu Yahya made clear that although they work primarily with Al Qaeda, the group’s overriding goal is to promote Islamist-inspired attacks in the West, regardless of ideological affiliation; “Hurras Al-Tawheed has not made the magazine exclusive to Al-Qaeda supporters, it is for every Muslim who resides in Western countries to do an attack… We want to be among those who try to revive the movement of Jihad in the West, if blood is what we have to pay, so be it. Lone wolves does not need any association with a group to earn his place in Jannah.”

It is difficult to gauge the level of readership of Mujahideen in the West. However, on the English language discussion section of Al Qaeda’s RocketChat server, it is a commonly requested. This is because it is far more accessible than the normal Al Qaeda propaganda. The magazine is composed of short, English-language articles which largely avoid the theological minutia endemic to official Al Qaeda propaganda. The first edition of the magazine even explained that this was a conscious choice; “the [Al Qaeda supporters] has to adapt to the situation we are dealing with. We have understood that the youth are used to short and quick information. We have realized that this is how the information needs to be to spread.”. Mujahideen in the West thus fills the same niche as al Qaeda’s Inspire, targeting young extremists who already hold extremist beliefs but may not have any intention of acting on them. 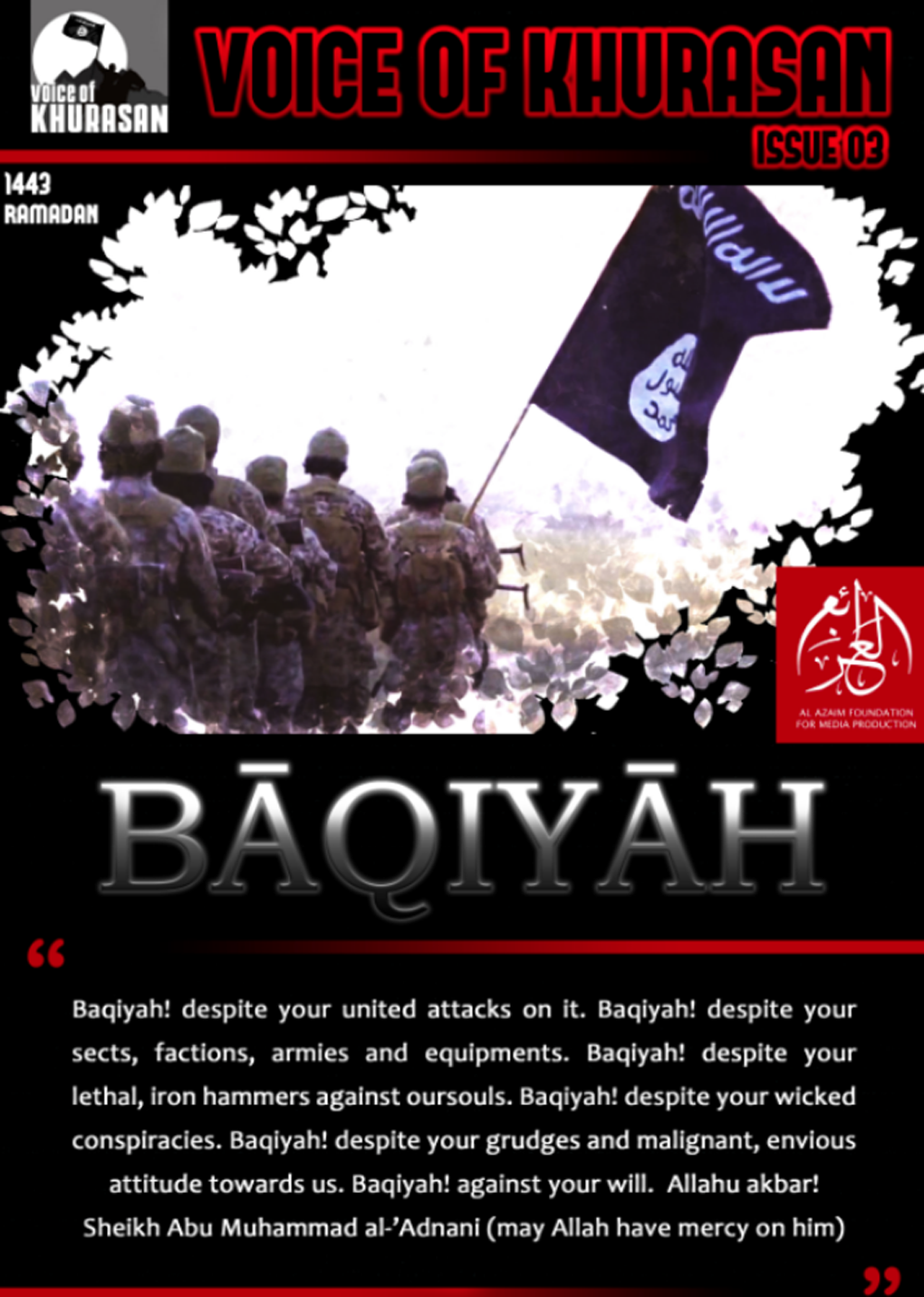 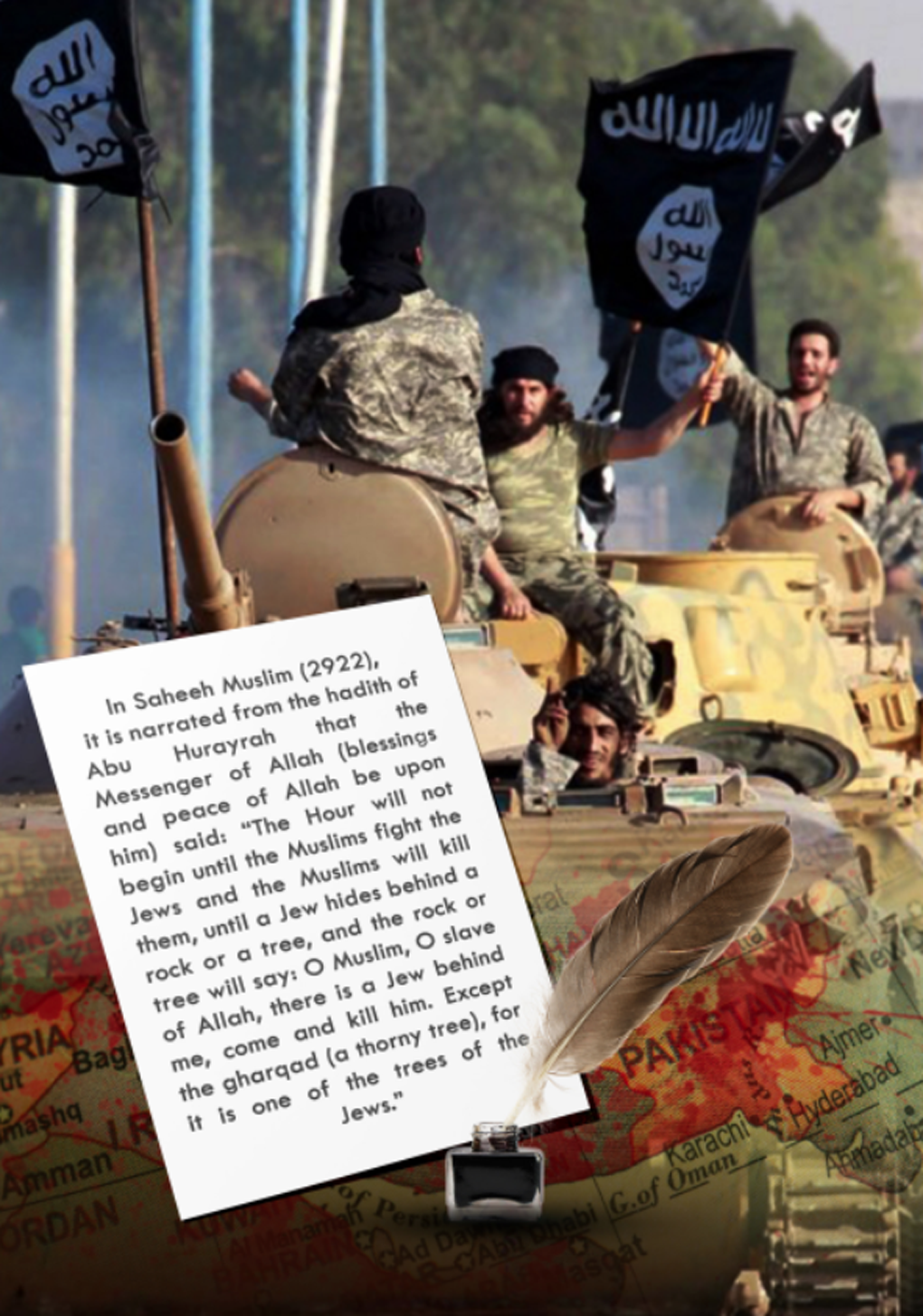 Voice of Khurasan is ISIS’s only regular English publication. The first installment appeared in February 2022, and there have been ten issues since then—the most recent came out on July 24, 2022. Its main function is to update supporters on ISIS activity in Central and South Asia, but it also often expounds on global issues affecting the group. Like all official ISIS publications, there is no author associated with the magazine. When a new edition of the magazine comes out, ISIS propaganda Facebook accounts post banners to notify their followers. Those who wish to download the issue are directed to other sites – and away from Facebook’s content moderators.

“The American Boomerang,” an article in the latest issue, claimed that the United States’ gun culture and frequency of mass shootings could be directly attributed to the violence and abuses perpetrated by the U.S. in Iraq, and suggests that gun violence is the result of divine will. “They never considered that their pointless war on Islam, in the name of ‘war on terror,’ will be answered in a divinely dictated way, when a shooter having nothing to do with Islam and ‘radicalization’ (in their words) welcomes a mass gathering of US [sic] civilians with several rounds of automatic rifle, scoring death toll like the ‘zombies’ do in video games.” The article closes by predicting that once the ISIS caliphate is reestablished, ISIS soldiers will invade the U.S. and take revenge for the Muslims killed by U.S. engagement in the Middle East.

The magazine also discusses ISIS’s efforts to establish operations in Afghanistan. After the Taliban took over the country following the U.S. withdrawal in August, 2021, ISIS reinvigorated its efforts to cement an operational base there, anticipating that the Taliban would have less capability and desire to engage in counterterrorism efforts against ISIS. Although the two groups are regional adversaries, ISIS’s assumption has been largely borne out. Experts have acknowledged that ISIS seeks to attack the U.S. as it gains strength and momentum, and the fact that it chose to position its English-language magazine in Afghanistan suggests that this may be the base from which it intends to launch those attacks.

To date, Al Qaeda has not been able to replicate an attack on the scale of 9/11, which resulted in long-lived, intense scrutiny of Islamist extremist activity and forced terrorist groups to seek out new tactics to achieve their goals. The Wolves of Manhattan, Mujahideen in the West and Voice of Khurasan magazines are innovations in the online Islamist extremist space. They are published anonymously, cheaply, and with wide reach on extremist social forums. They conform to modern media aesthetics with shorter articles, modern references and English translations. Rather than tackle the difficulties of trying to travel covertly in a highly scrutinized world, they attempt to reach supporters who are already located in or near prime targets. While these innovative strategies require innovative approaches from law enforcement, it is worth noting that since 9/11, Muslim communities have experienced increased surveillance and discrimination. In their attempt to confront these new threats, law enforcement should strive to learn from past mistakes that have caused harm to Muslim, Sikh, South Asian and Arab Americans and prioritize protecting civil rights as well as combatting extremist agendas.