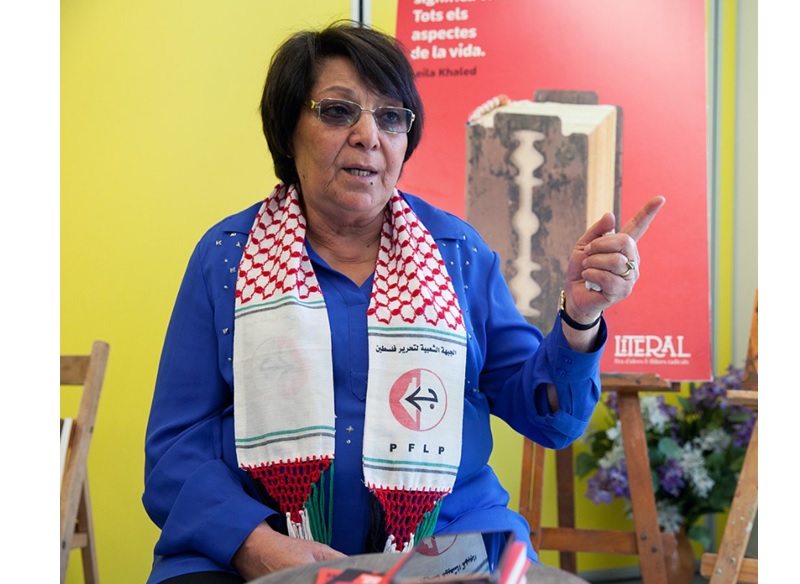 Leila Khaled, longtime active leader of the Popular Front for the Liberation of Palestine (PFLP) and who has engaged in PFLP terrorist operations, keynoted an October 3, 2020 public webinar during which she expressed explicit support for violence and deep animus toward Zionists.

The webinar was convened by the far-left “anti-imperialist” group International League of Peoples’ Struggle (ILPS).  In her session, Khaled claimed that Jews, who were oppressed in Europe, are now “playing the same role of Hitler [sic],” and alleged that Zionists are “guiding” American and foreign political leaders to “oppress their people.”  ILPS leader Cody Urban echoed Khaled’s call to action when he stated that Palestinians “have the necessity to resist by any means necessary,” and pledged to fight for a world free from Zionism.

Twice during the webinar, Khaled attempted to contrast her deep hostility toward “Zionists” with her positive attitude toward Jews, but she repeatedly demonstrated an inability to meaningfully distinguish between the two. The demonization of Zionism is an implicit attack on Jews, a majority of whom identify as Zionists or believe that a positive connection with Israel is an important part of their religious, cultural and/or social identity. This type of rhetoric also undermines efforts to bring people of diverse views together in pursuit of an equitable two-state solution to the Israeli-Palestinian conflict.

Cody Urban, who serves on the IPLS’s “International Coordinating Group,” added, “The Palestinian people have not only the right, but the necessity to resist using any means necessary to build a free and democratic Palestine…. We fight for a free Palestine and a free world from Zionism, imperialism and all reaction.”

Leila Khaled’s participation in the webinar came on the heels of a virtual event at San Francisco State University last month, where she was hosted by Professor Rabab Abdulhadi. That webinar was eventually de-platformed both by Zoom, Facebook and YouTube.

Khaled is well-known for her role in the hijacking of two civilian airliners, TWA Flight 840 in 1969 (bound for Tel Aviv from Rome) and El Al flight 219 in 1970 (traveling from Amsterdam to New York City).

In 1997, PFLP was designated as a terrorist organization by the United States Department of State, which cites the group as having carried out “large-scale international attacks in the 1960s and 1970s, including airline hijackings that killed more than 20 U.S. citizens.” PFLP is also responsible for numerous terror attacks against Israeli civilians in Israel and the West Bank, including a bomb attack that killed 17-year-old Israeli Rina Shnerb in 2019 and a shooting and meat cleaver attack that claimed the lives of four worshippers in a Jerusalem synagogue in 2014.

Khaled is also a member of the Palestine Liberation Organization's (PLO) Palestinian National Council (PNC) and is widely viewed as a feminist icon within the Palestinian national movement.

While properly protected by the First Amendment, hosting or venerating Khaled and others who advocate violence can serve to legitimize terrorism.