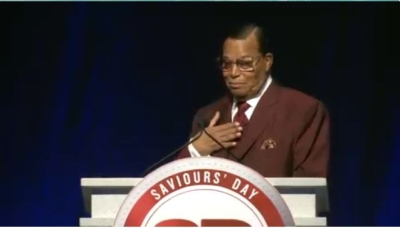 While Part 1 of Far­rakhan’s 2016 Sav­iours’ Day ser­mon last week at Detroit’s Joe Louis Arena largely avoided the topic of Jews, in Part 2 of his ser­mon yesterday, Far­rakhan stated that Trump “is the only man...that stood in front of some members of the Jewish community and told them 'I don’t want your money'... Any time a man can say to those who control the politics of America, ‘I don’t want your money,’ that means if I don't take your money, you can’t control me. And they cannot afford to give up control of the presidents of the United States.” However, Farrakhan also distanced himself from a full endorsement of Trump stating, “Not that I’m for Mr. Trump, but I like what I’m looking at.”

The NOI’s Sav­iours’ Day pro­vides Far­rakhan with an annual plat­form to dis­play his hatred for Jews. This year, in addition to his comments about Trump representing a break from the supposedly other Jewish-controlled presidential candidates, Farrakhan also blamed Jews, which he refers to as the “Synagogue of Satan” for the Iraq War and 9/11.

While Farrakhan tried to defend his use of the phrase “Synagogue of Satan” by discussing its origins from the Book of Revelations, his allegations of nefarious Jewish control over the American government and world events still very much constitute anti-Semitism. For example, Farrakhan claimed, “[former U.S. Deputy Secretary of Defense Paul] Wolfowitz, so-called Jew, but a member of the Synagogue of Satan…Satan is a human being without human characteristics. That’s why the revelator called them beasts in human form. These are people sitting in the Pentagon, planning the destruction of Muslim nations.”

He added, “Wolfowitz had 10 years now, to plan how they’re gonna clean out the Middle East and take over those Muslim nations. They needed another Pearl Harbor. They needed some event that was cataclysmic, that would make the American people rise up, ready for war…they plotted a false flag operation and when a government is so rotten that they will kill innocent people to accomplish a political objective, you are not dealing with a human. You’re dealing with Satan himself, the Synagogue of Satan.” He concluded, “Now they got into the Bush administration and on 9/11 the Twin Towers went down…George Bush, and those devils, Satans around him. They plotted 9/11. Ain’t no Muslim took control of no plane.”

The idea that Jews are to blame for 9/11 is nothing new for Farrakhan, who told his Saviours’ Day audience last year that “it is now becom­ing appar­ent that there were many Israelis and Zion­ist Jews in key roles in the 9/11 attacks.”

Despite Farrakhan’s decades-long history of racism and anti-Semitism, Farrakhan continues to receive support from celebrities and elected officials. Farrakhan was also provided with a platform to promote anti-Semitism in Iran earlier this month as a special guest at multiple high-level events, meeting with current and former Iranian government officials.

Farrakhan also announced that he does not intend to speak again any time soon, but did not elaborate on the reason. Farrakhan has been absent from some key NOI events recently due to his ailing health, but even at the age of 82, Farrakhan continues to avoid the topic of a successor. During Saviours’ Day he said, “If you want to know who my successor is then you ask Allah because I’m not wise enough to make that choice and I have not made any such choice because it’s not in my pay grade.” Despite the NOI’s apparent policy of avoiding this topic, the organization has at times spotlighted Mosque Maryam’s Assistant Minister Ishmael Muhammad as a possible successor.