A recent poll of French attitudes, on a variety of subjects of interest to ADL, revealed some surprising and unsurprising results. On the social acceptance of Jews in France, there was relatively good news, but the same unfortunately cannot be said about French attitudes towards Muslims.

The Le Monde – Fondation Jean Jaures survey analyzes attitudes about societal issues and political affiliation.  Over 12,000 people were polled from September 16-20 and the results were published on October 4.

The vast majority of French respondents, regardless of party, agree that “the manner in which Judaism is practiced in France is compatible with the values of French society.”  While the average of 82% has remained relatively stable over the past 10 years of polling, the political affiliations show greater acceptance among the mainstream parties and less among the far-right in Marine Le Pen’s Rassemblement National party and far-left La France Insoumise (LFI) party and Communist Party of France (PCF).  As a far-right party with high acceptance of Judaism, Reconquete’s score may have been influenced by the fact that party founder and leader, Eric Zemmour, is Jewish.

By contrast, acceptance of Islam descends directly and steeply from left to right and starting from a lower base.  Even the least accepting parties of Judaism – LFI and PCF – are less accepting of Islam, despite being the highest scorers on that question.  The greatest contrast is in Eric Zemmour’s xenophobic Reconquete party, where 85% of its supporters accept Jewish practices as compatible with French values, while only 8% accept Muslim practices as compatible.  Regarding Catholicism, the (more or less) straight line ascends from left to right, the opposite of the tendency for Islam, though not nearly as steeply. 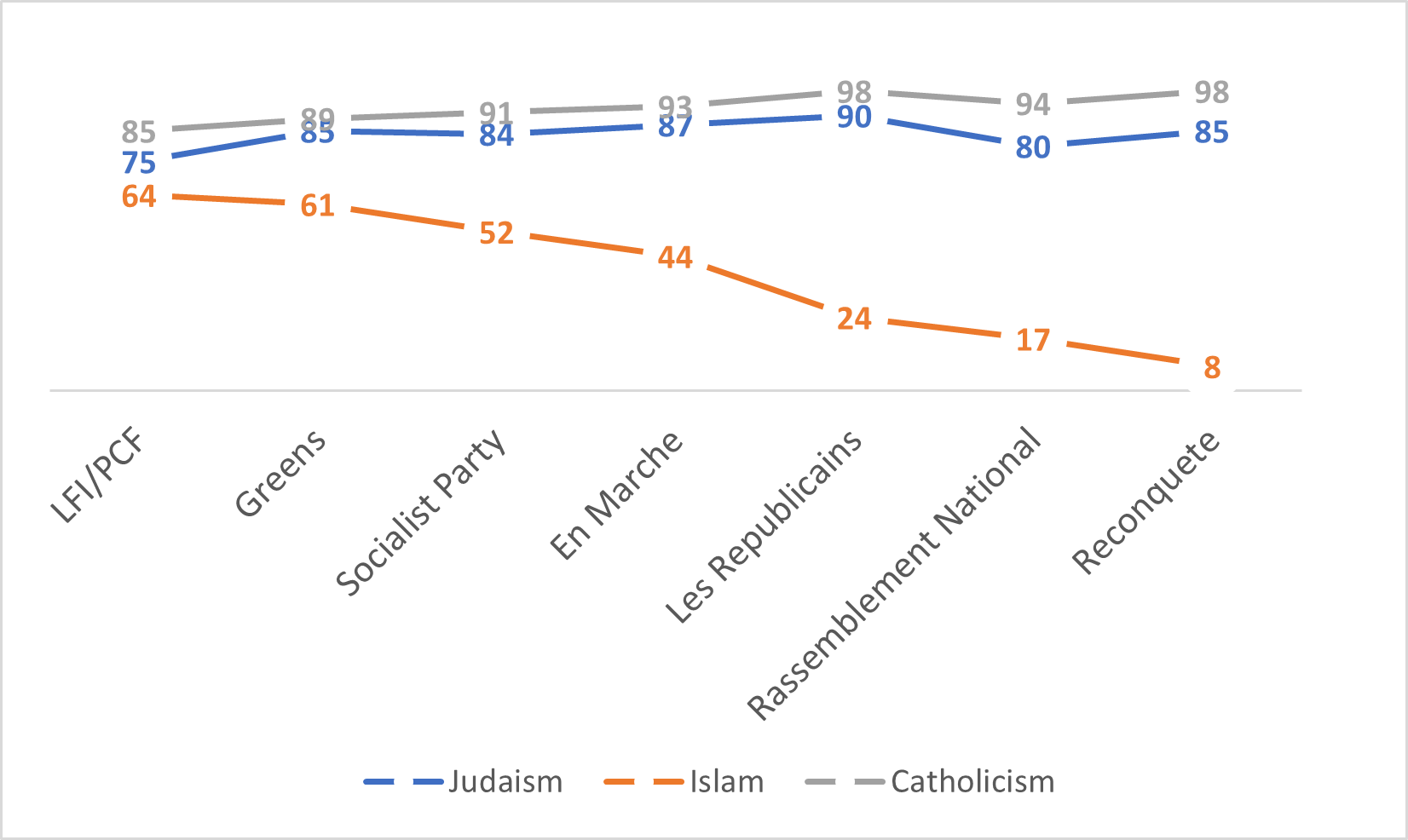 While the data indicate less extreme and less politicized attitudes towards Jews than towards most other minorities, we must not lose sight of the more salient antisemitism factor for French Jews: antisemitic violence.  There were 60 violent antisemitic assaults reported in 2021, which represents about 8 times the number of antisemitic assaults in the US. Overall, there were twice the number of reported antisemitic incidents than anti-Muslim incidents in France, even though the Muslim population is estimated to be over 10 times the Jewish population.

In sum, while the positive perceptions about Jews should be welcomed, France has a long way to go in demonstrating an acceptance of its Muslim community, while also working to ensure the long-term comfort and security for France’s Jewish community.