One Year After Ban, Holocaust Denial Remains on Facebook 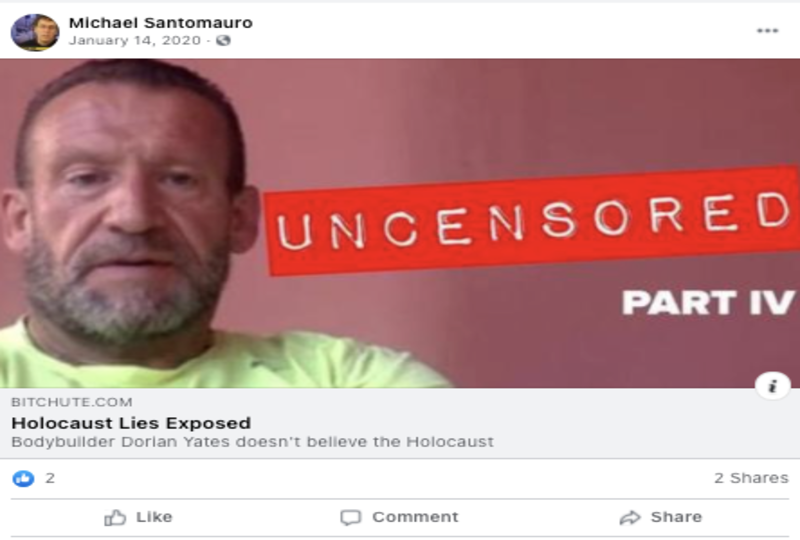 UPDATE: As of December 9, 2021, Facebook has removed all nine posts reported on the platform in conjunction with our research.

October 2021 marked one year since Facebook banned Holocaust denial from its platform and officially classified Holocaust denial as hate speech instead of misinformation. On the first anniversary of this policy’s enactment on Facebook properties, analysts in ADL’s Center on Extremism (COE) sought to determine whether the effort has been successful – and whether Holocaust denial is still discoverable on the platform.

A particularly pernicious from of antisemitism, Holocaust denial aims to cast doubt on the facts of the Holocaust as they pertain to its Jewish victims, and for years it percolated freely across Facebook. Adherents claim that Jews fabricated evidence of their own genocide to gain sympathy, extract reparations from Germany and facilitate the allegedly illegal acquisition of Palestinian land for the creation of Israel.

In conjunction with this research, on November 15, 2021, COE analysts, using a personal account, reported 9 of the troubling posts cited in this piece to determine how responsive Facebook would be in removing posts that overtly violate their hate speech policy. As of November 29, 2021, Facebook has only replied to concerns about one of the posts. This post calls the Holocaust a fraud and claims “the reason people are questioning, denying and pouring scorn and contempt on the holocaust, is simply because it isn’t true.” According to Facebook, this post was not in violation of its hate speech policy, which rejects posts “denying or distorting information about the Holocaust.”

ADL engaged in a decade-long advocacy campaign to push Facebook to change its policy on Holocaust denial. In the wake of the Stop Hate for Profit campaign and pressure coming from a variety of external sources, in October 2020 Facebook finally changed its policy.

To mark Holocaust Remembrance Day in 2021, ADL’s Center for Technology and Society (CTS) examined how different platforms addressed Holocaust denial and produced the 2021 Holocaust Denial Scorecard. Facebook (including Instagram) received a ‘D,’ the lowest grade. ADL researchers noted that three months after making the policy change, Facebook still hadn’t made necessary changes to its policy enforcement and Holocaust denial content was easily found on the platform.

It is true that Facebook has successfully removed major Holocaust denial entities – the large private and public groups (with thousands of members) dedicated to Holocaust denial are no longer on the platform. When you search “Holohoax,” the phrase most popularly used to communicate Holocaust denial, the sole result is a link to information about the Holocaust.

With some additional digging, however, the cracks in enforcement come to light. While dedicated groups have been removed and one search term limited, Holocaust denial content remains on the platform. COE found that the majority of Holocaust denial posts still accessible were posted prior to the October 2020 ban, yet never subsequently removed. These are located in public and private groups as well as on personal profiles, and many contain links to external, explicit Holocaust denial sources.

A post from March 24, 2020 contained a link to a Russian Insider article headlined, “They’re Even Admitting that the Slander of Dr. Mengele Was a Pack of Lies – the Last Days of the ‘Holocaust’ Myth.” Mengele, known as the “Angel of Death,” conducted horrific, often deadly experiments on prisoners at Auschwitz. The same user shared additional Russia Insider articles, including a December 29, 2019 post headlined, “Another Holocaust Lie: 1.3M Jews Sent to Treblinka, Other Camps, Not Killed, They Were Transferred Elsewhere.” A comment on this post provided an external link to the Holocaust denial organization, Institute for Historical Review (IHR). The Auschwitz Memorial & Museum has described IHR as “the focal point of world neo-Nazi propaganda since 1978.”

Another user cited Russia Insider to promote her Holocaust denial ideas in a post that emboldened her followers to share virulently antisemitic comments in response, such as “Fuck them zio ng ist bull shitting bastards.” The article titled “Mainstream Holocaust Narrative ‘Substantially, if not Entirely, False’ - Editor of Top US Conservative Site (Ron Unz),” claims “the Holocaust story relentlessly hammered into the public consciousness by Jewish-owned Hollywood and media is a load of baloney.” In addition to peddling Holocaust denial, the article’s author, Ron Unz, has endorsed the claim that Jews consume the blood of non-Jews, and has claimed that Jews control the media, hate non-Jews and worship Satan. 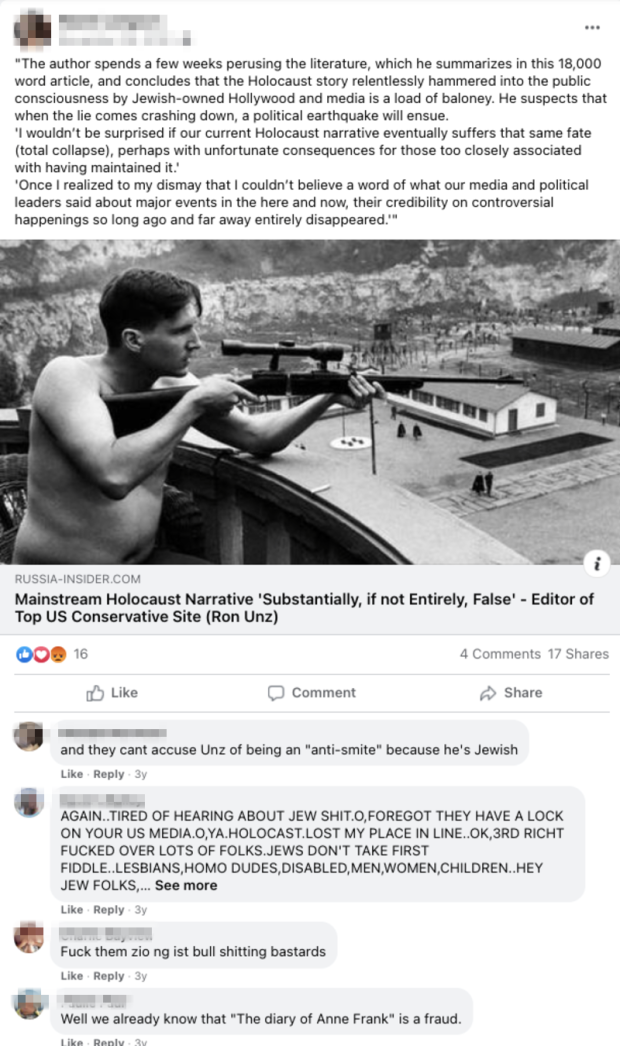 In some cases, Facebook attempted to mitigate the damage of the externally linked posts with “false information” labels. In one instance from July 4, 2017, a user shared an article titled “International Red Cross Report Confirms the Holocaust of Six Million Jews is a Hoax.” The source of the article, Renegade Tribune, is an antisemitic, conspiratorial and white nationalist publication. This post was shared 130 times, and it is unclear whether the false information identifier was added before or after it was shared. 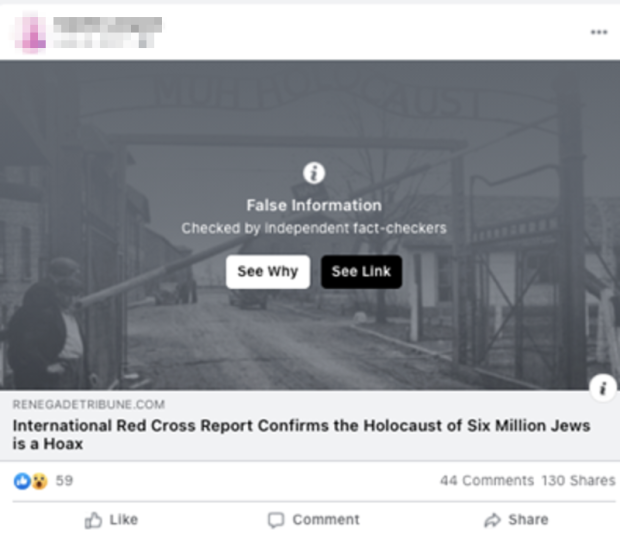 Alongside links to relatively obscure extremist publications, content from well-known Holocaust deniers persists across the platform. Michael Santomauro, one such denier, frequently shares Holocaust denial content on his profile, including a post that contained comments by another known denier, Thomas Dalton, that describes Holocaust revisionism, asserts that six million Jews were not murdered in the Holocaust and argues that the gas chambers did not exist. The post suggests further reading by Dalton and convicted German Holocaust denier Germar Rudolph, with links to their websites that focus exclusively on Holocaust denial. 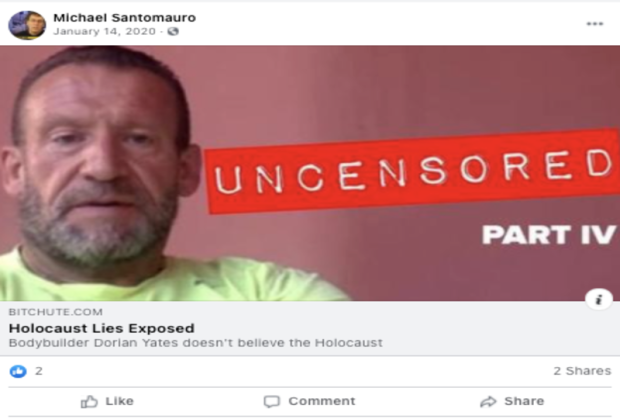 Fred Leuchter, another infamous Holocaust denier who authored the Leuchter Report (a pseudoscientific report that claims that the gas chambers at Auschwitz were not used to kill people), also posted a link to Rudolph’s website on Santomauro’s Facebook page. This post was shared months after the Holocaust denial policy went into effect. 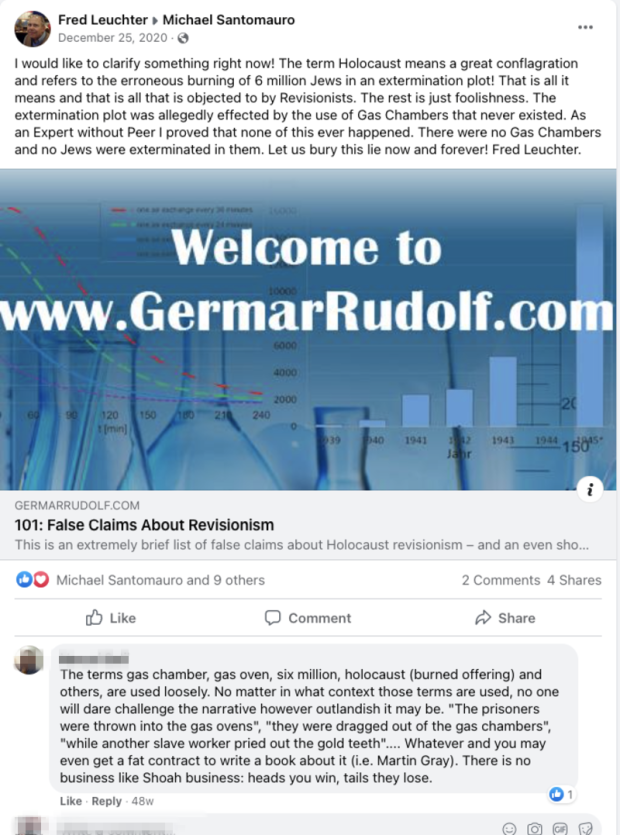 Like the post above, Santomauro's Facebook page demonstrates the gaps in Facebook’s policy enforcement. He currently has an image prominently displayed on his profile as his “featured story” showing Jeff Bezos saying, “I DENY that THE HOLOCAUST can withstand critical scrutiny” [emphasis theirs]. This post, which was also his cover image for some time, is tantamount to him stating that the Holocaust cannot withstand critical scrutiny, implying that it is fabricated or false. 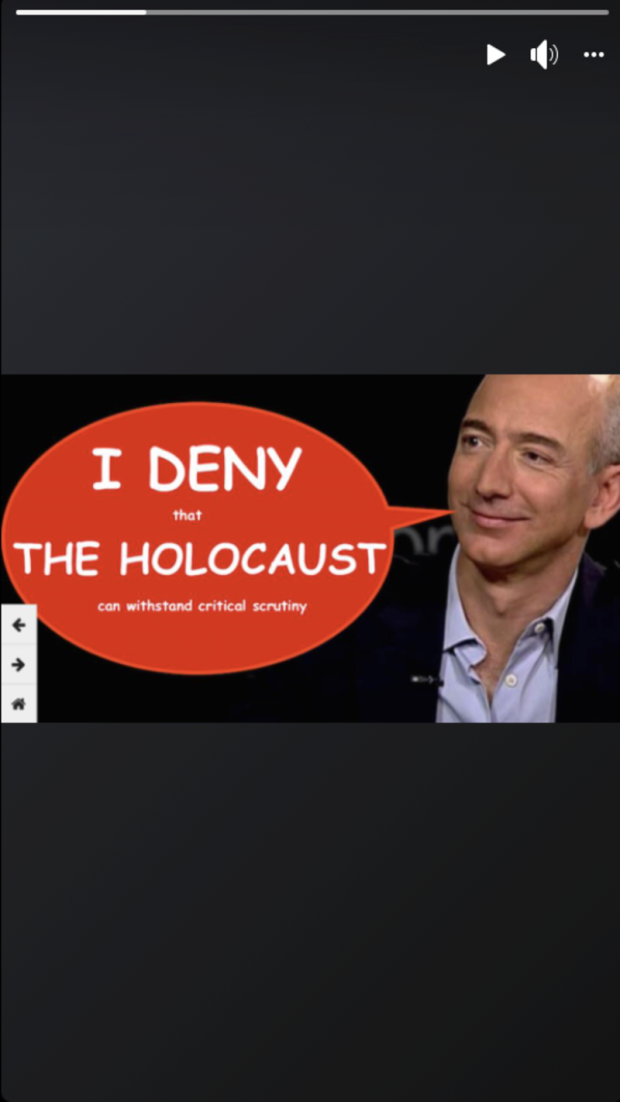 Another example of Santomauro’s policy evasion can be seen in a September 3, 2021 post. Here, he shared a post from 2016, promoted to him through the “See Your Memories” feature on the platform, replete with Holocaust denial. In the text of the post, it states “the reason that people are questioning, denying and pouring scorn and contempt on the holocaust, is simply because it isn’t true;... Today – over 70 years later – it is the duty of each and every one of us to expose this holocaust fraud...” 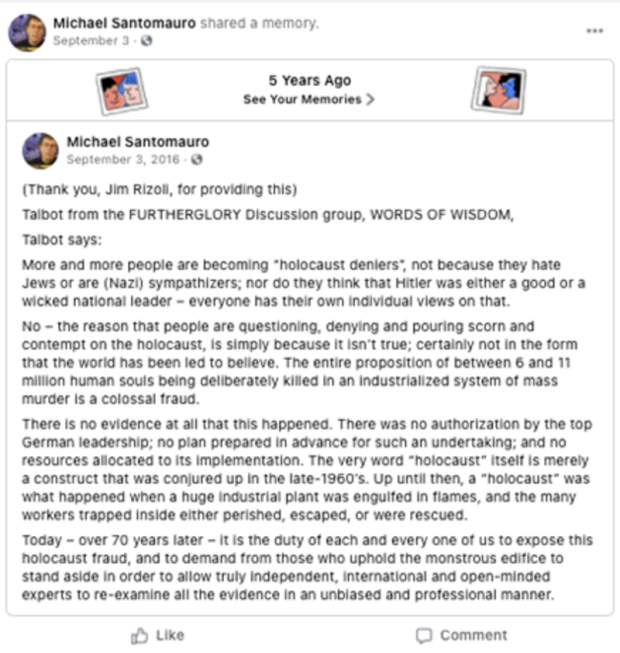 While Facebook has removed the major Holocaust denial groups, existing groups dedicated to broader conspiracies contain Holocaust denial. One such post was shared in the public Facebook group “Conspiracy Research,” which has more than 12,500 members. In this post from March 10, 2020, someone wrote, “Holocaust didn’t happen” and shared images and text to “disprove” many proven elements of the genocide, such as denying the existence of gas chambers, mass graves and crematoria across extermination camps. 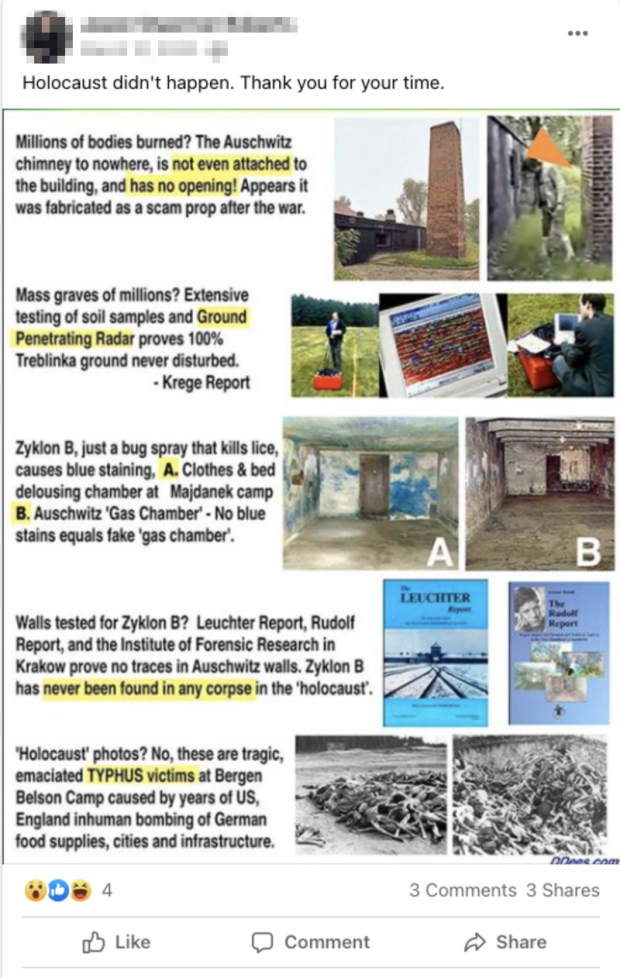 In another group that is rife with antisemitic and conspiratorial content, called “AGAINST ROTHSCHILD, ZIONISTS, MASONRY, AND ISRAEL WHICH TYRANNIZE THE WORLD [sic],” a post from November 8, 2020 stated “AND THIS IS EXCTALLY WHAT THEM BEASTS ARE UP TOO. JUST HOW THEY GOT CONTROL OF PALESTINE, FAKE FALSE PROPHECIES, LIKE, THE JEWS GO BACK TO ISRAEL IN 1947 MINUS 6 MILLION, THE ZIONIST EVIL ASHKENAZI JEWISH BEASTS ROTHSCHILD'S SET UP 2 WORLD WARS AND THE SO CALLED HOLOCAUST TO GET PALESTINE AS A WAR BASE AND ZIONIST NWO CONTROL CENTRE...YOU WOULD NOT HAVE TO BE A ROCKET SCEINTEST TO WORK THAT OUT...ZIONISM IS THE WORLDS TOXIC CANCER...” This post, which evaded the Holocaust denial content policy, is replete with dangerous antisemitic conspiracy theories and rhetoric.

Facebook has taken some positive steps to address its Holocaust denial problem. However, the platform must take additional measures to improve the enforcement of this content policy, and it should remove old Holocaust denial posts that predate the policy.

Additionally, Facebook needs to expand the language parameters used to detect Holocaust denial, including developing and applying more sophisticated technological systems such as natural language processing or other machine learning techniques. While “Holohoax” is a popular term in Holocaust denial spaces, it is not the only way to express Holocaust denial. Searching “Holocaust didn’t happen” or referring to it as the “so called Holocaust” should induce the same response as searching the term “Holohoax,” and the platform should remove posts that contain this language. Further, external links to Holocaust denial content, which often include egregious conspiracies and extremism, should not be permitted under the parameters of this content policy.

More broadly, as ADL’s 2021 Holocaust denial scorecard shows, tech companies must invest more resources into understanding and preventing the spread of Holocaust denial. In that research, ADL found that strong platform policies do not necessarily correlate with improved enforcement, suggesting that expanding platform rules alone does not result in meaningful change. Detection tools should not rely on keyword searches alone but should combine machine learning methods with human review.

Because platforms are not transparent about how they enforce their policies, however, it’s still not possible to understand how they detect or make determinations about harmful content. Although there may be credible safety reasons for platforms not to share the specific rationale in enforcement decisions, the lack of information prevents researchers from studying and understand how these policies are implemented. Without transparency, civil society organizations, independent researchers, and the public broadly remain in the dark about how, when and why platforms take action.

Based on this report and our prior research, we make the following recommendations to better address Holocaust denial on Facebook as well as on other social media platforms:

Platform policies on their own are not sufficient; they require enforcement that is consistent across a digital social platform. We recommend that, especially for hateful content such as Holocaust denial, tech companies designate sufficient resources such as training for human moderators, greater numbers of human moderators, and expanding the development of automated technologies to commit as few mistakes as possible when enforcing their policies around this content.

Platforms should provide users with more information on how they make their decisions regarding content moderation. They should at least provide the user with the policy that guided their decisions, and some semblance of information about why the content did or did not violate the policy in question.

Tech companies must make changes to their products to prioritize users' safety over engagement and reduce the amount of Holocaust denial and other hateful content on their platforms. Some non-exhaustive options: adjusting what kinds of content are discoverable in search and how content is amplified and to whom, changes to reporting flows to better escalate reported hateful content to the appropriate internal reviewers, closing the feedback loops to ensure that reports of policy violations are routed back to reporters, adding friction to the posting process, reviewing certain users' posts before they are amplified, and more.