Parler: Where the Mainstream Mingles with the Extreme

The social media site Parler, which has become increasingly popular among conservatives, has also attracted a range of extremists. In recent weeks, the site has drawn millions of new users frustrated with what they perceive to be “anti-conservative” bias exhibited by mainstream social media platforms.

While the site itself is not extremist, extremists have joined Parler in large numbers alongside millions of mainstream users, creating the potential for extensive and worrying commingling of extremists and non-extremists.

Parler is the just latest in a long line of platforms, including Telegram and Gab, that have attempted to lure right-wing users away from mainstream social media platforms.

The site experienced exponential growth in recent months, especially following Election Day, as Twitter and Facebook limited posts by President Trump and other conservative influencers that violated terms of service prohibiting the spread of misinformation. Parler currently claims to have around eight million active users.

Parler has attracted a range of right-wing extremists. Proud Boys, QAnon adherents, anti-government extremists (Oath Keepers, Three Percenters and militia) and white supremacists (from members of the alt right to accelerationists) openly promote their ideologies on the site, while Holocaust denial, antisemitism, racism and other forms of bigotry are also easy to find.

In the days following the election, extremists and mainstream conservatives alike are using Parler to organize and recruit for pro-Trump (Million MAGA March and #StoptheSteal) events in Washington, D.C., and elsewhere. 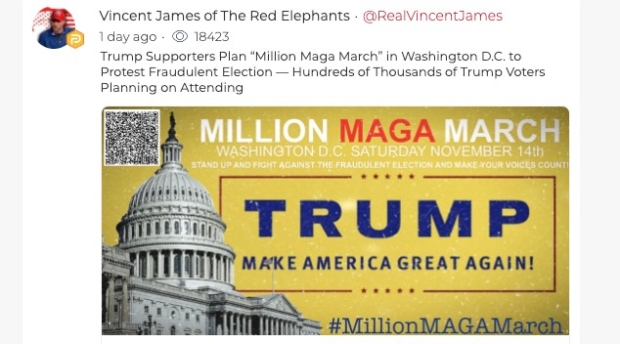 While Parler is not an extremist platform, the site hosts a significant and growing number of users who adhere to a wide variety of mostly right-wing extremist ideologies. Unlike more mainstream platforms, Parler allows users to direct followers to sites like Telegram and Bitchute, which are rife with extremist content.

Some extremists have garnered large followings on Parler, including (as of 11/11/2020):

As millions of conservatives flock to the site, Parler risks becoming a right-wing echo chamber that could exacerbate political polarization and division. And extremists may attempt to leverage this mainstream migration as a way to elevate their own hateful views.

Not all extremists are convinced that Parler will be a permanent home. Some fear that the site will go the way of other social media platforms that began as self-professed havens for free speech but later cracked down on extremist content. As white supremacist Mike Enoch remarked on Telegram about Parler, “…this seems like an echo chamber for ‘respectable’ conservatives…and they are supposedly letting us swim in their fishbowl. Let’s see how long it lasts.”

Founded in 2018 by John Matze and Jared Thomson, Parler positions itself a champion of free speech.

Parler currently boasts more than eight million users, a number that represents a more than eight-fold increase in just one week, according to CEO John Matze’s November 10, 2020, letter to Parler users. In the letter, Matze celebrated the platform’s growth and applauded Parler’s efforts – dubbed Twexit and Erasebook -- to attract Twitter and Facebook users away from those sites, citing the platforms’ alleged “suppression of election information” as a catalyst for users’ departures.

Many conservative influencers, including Sean Hannity, Senator Ted Cruz and Eric Trump, have railed against Twitter and Facebook and urged their followers to make the move to Parler.