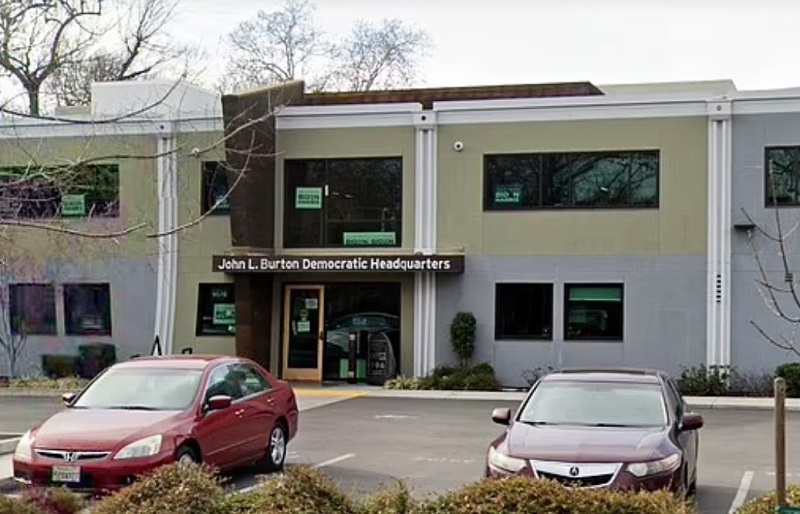 On July 15, 2021, the U.S. Department of Justice revealed that it had indicted two California men, Ian Benjamin Rogers and Jarrod Copeland, on charges related to an alleged plot to destroy the Democratic party headquarters in Sacramento with incendiary devices. According to communications between the two men, they were animated by grievance over Donald Trump’s loss of the 2020 election, and planned to conduct their attack after President Biden’s inauguration on January 20, 2021.

The announcement from the U.S. Department of Justice claims the men hoped the attack “might start a movement to overthrow the government.”

These charges underscore the continuing threat from anti-government ideologies. This alleged plot, like the January 6 insurrection at the Capitol in Washington DC, emerged out of the increasing radicalization of a segment of society animated by anger over former President Trump’s election loss, and a profound opposition to democratic norms.

Copeland and Rogers reportedly began planning on November 25, 2020 on an encrypted message platform, originally thinking of targeting the Governor’s mansion, which was occupied by Democratic Governor Gavin Newsom. They allegedly later switched the target to the Democratic Headquarters building in Sacramento, and used multiple encrypted messaging applications to plan over the next 6-8 weeks on how to attack the building.

They also allegedlly discussed potentially targeting the San Francisco offices of Twitter and Facebook.  Hatred of technology companies is an important element in the ideology of some extremists, who believe their free speech is being hampered by an unaccountable elite that is biased against them.

Rogers was arrested on January 15, 2021, five days before the inauguration, after law enforcement received a tip that Rogers possessed several illegal guns. Officials allegedly found 45-50 firearms, including at least 3 fully automatic weapons, thousands of rounds of ammunition, and 5 operational pipe bombs. During the raid, police found a Nazi flag in Rogers’ possession, but his lawyer claims it’s a memento his grandfather had after fighting in Germany in WWII.

Rogers and Copeland have both been charged with conspiracy to destroy by fire or explosive a building used or in affecting interstate commerce. Rogers faces additional weapons charges, while Copeland faces an additional count of destruction of records for the messages he attempted to delete of their attack plans. Copeland made his first federal court appearance on July 15, 2021. Rogers will next appear for a status conference on July 30, 2021.

This plot is the latest example of violence and other activity targeting Democratic and Republican Party offices. While the motivation for each of the following incidents of vandalism, arson, and terrorist plots is not always clear, the following list may shed light on the impact of growing anti-government sentiment and political polarization.

The list includes recent incidents targeting Democratic and Republican Party offices. It does not include other cases where extremists targeted politicians directly, such as Cesar Sayoc’s 2018 plot(s) to attack prominent Democratic Party officials using pipe bombs, or the case of James Thomas Hodgkinson, who injured U.S. Rep Steve Scalise and three other players when he opened fire on a Republican congressional softball team in 2017.

Feb. 2021 / Brookings, OR – The headquarters of the Curry County Democratic Party was vandalized for the sixth time since 2012. The front window of the building was smashed. The building’s security camera did not capture the event but did capture a group of men walking past just prior who were overheard using an expletive against President Joe Biden.

Jan. 2021 / Portland, OR – A group of left-wing and anarchist protesters vandalized the headquarters of the Democratic Party of Oregon during an Inauguration Day protest, smashing windows and spray painting the anarchist symbol on the building. Eight people were arrested.

Jan. 2021 / Charleston, SC – The headquarters of the Charleston County Democratic Party were vandalized. An unknown individual poured “putty” over the lock and door handle of the building. Two flyers were found at the scene, one which read “the world is watching” and another that cursed Joe Biden and George Soros.

Jan. 2021 / Lafayette, IN – Shots were fired into the headquarters of the Tippecanoe County Democratic Party.

Jan. 2021 / Eureka, CA – Headquarters of the Democratic Party in Eureka were broken into. A window was smashed and a few items inside were vandalized.

Jan. 2021 / Washington, D.C. – On the evening of Jan. 5, an unknown individual placed pipe bombs outside both the Democratic National Committee and Republican National Committee headquarters in Washington, D.C. The bombs were discovered the next day and safely detonated by law enforcement. No suspect(s) have been arrested yet, and the FBI continues to seek information from the public about the case.

Dec. 2020 / Spokane, WA – Peter Yeager allegedly walked into a building housing the Spokane County Democratic Party headquarters carrying what he claimed was a bomb. He handed a manifesto to a volunteer and briefly ‘detained’ an individual who was later able to safely exit the building a few minutes later. He later came out and surrendered.

Nov. 2020 / Pennsylvania – On November 1, 2020, the house of Republican US Senate candidate Sean Parnell was vandalized. His garage exterior was spray painted with the image of a hammer and sickle and the message “Elections No Revolutions Yes!”

Nov. 2020 / Houston, TX – The headquarters of the Harris County Democratic Party was vandalized. Red spray paint was used to write “Election No, Revolution Yes” with a drawing of a hammer and sickle symbol on the front of the building. The front door was also covered in red paint. Super glue was also placed in the locks of the doors to the building.

Nov. 2020 / Austin, TX – The headquarters of the Travis County Democratic Party was vandalized with graffiti. Messages included “Reconstitute the Communist Party” and “The working class can have only 1 party.” The glass in the front door of the building was also shattered.

Nov. 2020 / Portland, OR – The headquarters of the Multnomah County Democrats was tagged with graffiti during a protest with messages such as “No good presidents” and the anarchist symbol. Several windows were also smashed. Three people were arrested.

Nov. 2020 / Mount Lebanon, PA – An unknown individual vandalized the office of Democratic Congressman Conor Lamb (PA-17). “Don’t Vote! Fight for Revolution” and a hammer and sickle symbol were spray-painted on the front of the building.

Nov. 2020 / Pittsburgh, PA - An unknown individual vandalized the office of Democratic Congressman Mike Doyle (PA-18). “Don’t Vote! Fight for Revolution” and a hammer and sickle symbol were spray-painted on the front if the building.

Oct. 2020 / North Carolina – On October 8, 2020, the Henderson County Republican Party headquarters and campaign signs throughout the area were vandalized. The vandals have not been identified, but Republican party Chair Merry Guy believes that this was a “coordinated effort.” Vandals taped and glued signs for Congressional candidate Madison Cawthorn onto the windows of the headquarters building, defaced Trump signs, threw away other campaign sings, and spray painted over a Republican billboard in the county.

Oct. 2020 / Dallas, TX – Campaign signs for Joe Biden and Kamala Harris were set on fire outside of the Dallas County Democratic Party’s headquarters.

Oct. 2020 / Michigan – More than a dozen individuals associated with a militia group called the ‘Wolverine Watchmen’ were arrested for plotting to kidnap Michigan Democratic Gov. Gretchen Whitmer. The group reportedly targeted Whitmer because of her administration’s Covid-19 policies and had engaged in tactical training to prepare for the “boogaloo” (a term for civil war).

Oct. 2020 / Coos Bay, OR – The headquarters of the Coos County Democratic Party was vandalized. An unknown individual taped a sign to the door which read “You stink! And so do your nominees! #MAGA” and poured a putrid-smelling liquid on the ground and vent at the front of the building.

Aug. 2020 / Wisconsin - On August 26, 2020, the Republican Party of Door County headquarters was vandalized with graffiti. Messages spray painted on the exterior walls and windows include “Fuck Trump,” “BLM” and “Say their Names.”

July 2020 / Phoenix, AZ – Matthew Egler allegedly set a fire at the headquarters of the Maricopa County Democrats in Phoenix. No one was hurt in the fire, which gutted the building. Egler reportedly set the fire as retaliation for the Maricopa Democrats banning him from volunteering. He had previously served as a precinct committee person for the AZ Democratic Party from 2016-2017.

May 2020 / California - On May 5, 2021, Carlos Espriu was sentenced to five years in prison for an incident the previous May in which Espriu used a Molotov cocktail to attack a building associated with the Republican Party in California.

Dec. 2019 / Phoenix, AZ – The headquarters of the Maricopa County Democratic Party was vandalized. An unknown individual spray-painted “SHAME!” on the building. This occurred shortly after Democrats in the U.S. House of Representatives voted to impeach President Trump.

July 2019 / Louisville, KY – The headquarters of the Louisville Democratic Party was vandalized with graffiti that included messages such as “Witch Hunt,” “Treason Dem” and “Racist AOC.”

Mar. 2019 / Oklahoma – The headquarters of the Oklahoma Democratic Party was vandalized with racist and antisemitic graffiti. Swastikas and racial slurs were spray-painted on the building and sidewalk.

Sept. 2018 / Wyoming – On September 6, 2018, Kellen Sorber set fire to the Republican Party headquarters in Laramie, Wyoming. There were no reported casualties.

July 2018 / New York – On July 6, 2018, Martin Astrof allegedly attempted to ram a vehicle into a volunteer at the campaign headquarters of Republican Representative Lee Zeldin in Nesconset, New York. There were no reported casualties, and Astrof later stated that he “wanted to kill supporters of President Donald Trump and U.S. Rep. Lee Zeldin.”

Oct. 2016 / North Carolina – On October 16, 2016, a Molotov cocktail was thrown at a Republican Party office in Hillsborough, North Carolina. There were no reported casualties and no known assailants, but a nearby building was also spray-painted with the message: “Nazi Republicans leave town or else.”

June 2016 / Nevada – On June 18, 2016, Michael Steven Sandford attempted to assassinate Republican presidential candidate Donald Trump at a Las Vegas campaign rally. Sandford attempted to remove a gun from the holster of a police officer and later stated that he did it because “somebody had to stand up for America.” He later told Secret Service that he had planned for over a year to assassinate Trump.