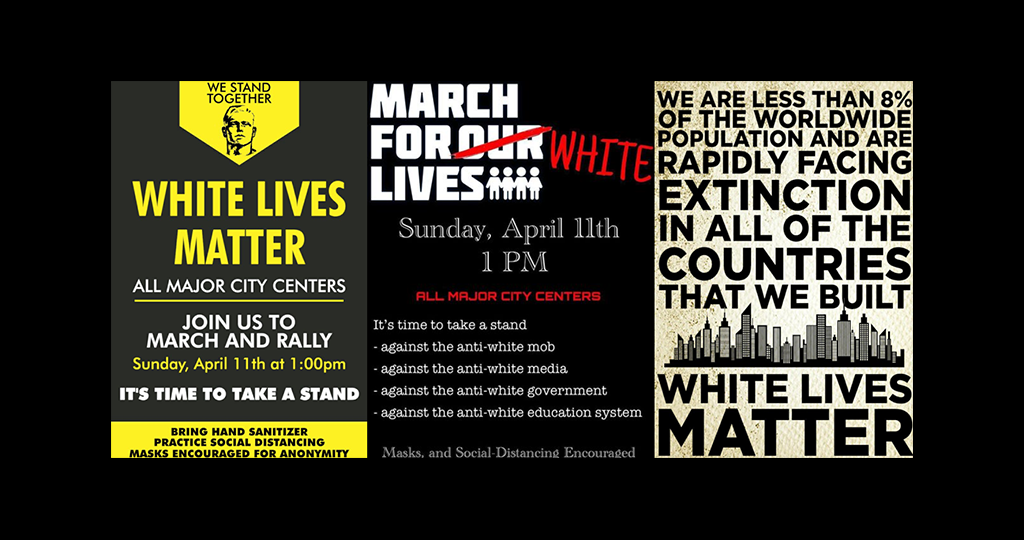 The White Lives Matter marches that took place on Sunday, April 11 were very sparsely attended. Counter-protesters made up the majority of attendees -- and in some cases were the only attendees.

Huntington Beach saw the largest rally, with around 10 WLM marchers, some bearing extremist symbols and others with various right-wing flags, and 500 counter-protesters at its peak before being dispersed by police. Twelve people were arrested during the rally, two for noise violations and one for obstruction of law enforcement. A small group of white supremacists were present in Huntington Beach, including Loyal White Knights (Klan) Grand Dragon William Ernest Hagen, aka William Quigg. Additionally, at least two men with Nazi-related tattoos attended the event, one of whom was placed in a police car after getting into an altercation with an Asian man. The white supremacists’ attendance did not appear to be coordinated.

Thirteen members of the neo-Nazi group NSC-New England gathered in Wakefield, Massachusetts, with a “White Lives Matter” banner. On their Telegram channel, they claimed it was in cooperation with the “WLM effort.”

Fort Worth, Texas had three vocal WLM protesters, one of whom espoused rhetoric about “demographic replacement” and used the phrase “blood and soil.” This protest was also outnumbered by counter-protesters.

Albuquerque, New Mexico, saw a protest allegedly organized by the Proud Boys, but the Proud Boys never showed up. This protest was not mentioned on the main WLM Telegram channel. One man, bearing an AR-15 and a sign reading “All Guns Matter,” was escorted away by police.

In New York City, two WLM marchers made an appearance, one with a Siege mask. Here too, marchers were outnumbered by counter-protesters.

Between one and two WLM protesters were present in Nashville, Boise, Norfolk, Chicago, New Orleans and Fargo, but left without incident once they realized there would be little to no turnout.

This event’s failure is due largely to antifa activity on many of the city-specific Telegram channels, where activists leaked locations and participant information, leading to distrust and confusion. Reports suggest that some of the channels may have always been antifa honeypots. The anticipation – and reality -- of a large number counter-protesters may have also led some would-be WLM marchers to abandon their plans.

On March 25, 2021, a new Telegram channel emerged, agitating for nationwide “White Lives Matter” marches and events, to be held on April 11. The potential events have attracted the attention of extremists and non-extremists: promotional language leans heavily on both white supremacist and racist tropes and plays into the narrative of white grievance that underpins white supremacist rhetoric. The mission statement for the march reads: “To revive the White Racial Consciousness and to unify White People against white hate. A show of support for White victims of interracial crime.”

The primary organizing channel, which has amassed 1,793 followers in 11 days, advises interested subscribers to set up Telegram channels to hold events in their own cities. Responding to the question of whether this would be a "one time only event," a channel administrator wrote, "No, this is meant to start an awakening. We must protect our own again and do so publicly and fearlessly."

Run by unaffiliated individuals, most of the channels promoting the April 11 events have sparse followings as of March 31, ranging from 130 to fewer than 20. The exception: The Western Chauvinist, an overtly white supremacist offshoot of the Proud Boys’ Telegram channel, boasts more than 45,000 followers, and has posted several times in support of potential White Lives Matter events. An administrator posted this, referring to potential April 11 events: “It is what YOU make of it. There is no central organizer. YOU are the organizer. If your local march doesn’t happen, it’s because YOU didn’t arrange one. If it turns out to be a honeypot, it’s because of the company YOU keep, and YOUR inability to host an event.” No official Proud Boys channels have endorsed or promoted the events. And administrators on the primary organizing channel advised followers: “...please do not make [sic] a proud boy event. It’s a pro white event."

The rhetoric on the smaller, city-specific channels varies; some are taking an overtly white supremacist approach while others express racist beliefs that are not explicitly extremist. As of April 6, twenty-one channels have identified actual locations where they are encouraging protestors to meet.

At least two white supremacist groups which previously promoted the event have claimed online that they are not participating in the rallies, and there is no indication of widespread buy-in from white supremacists. A handful of posts about the April 11 events have appeared on Twitter, mostly on left-wing activists’ accounts. Four related posts have appeared on Instagram, and there is one account dedicated to the march, which as of April 6 has fewer than five followers. A related Gab page also has fewer than 10 followers.

At the moment, the discussions and activity around White Lives Matter events seem to be largely – if not exclusively – online.

If these events do materialize, it is possible that the mix of white supremacist and racial grievance rhetoric will bring together extremists and disaffected white people primed for further radicalization.