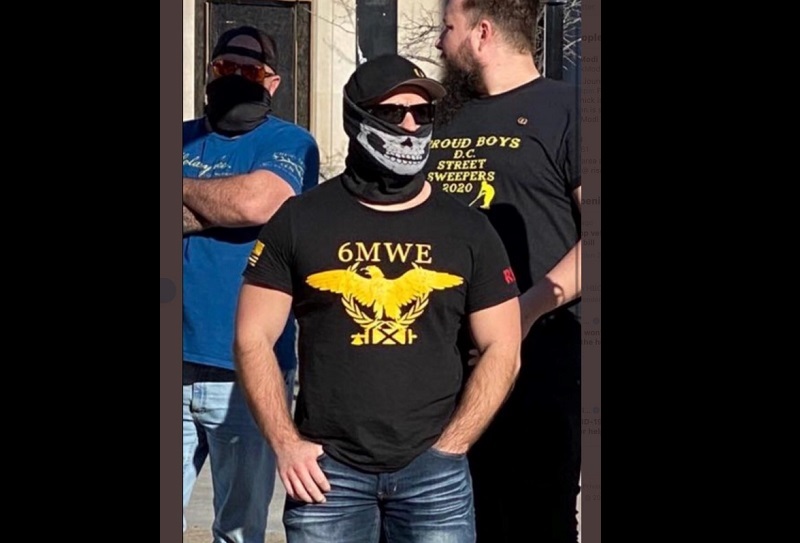 In mid-December an image started circulating on social media. The image was taken in Washington, D.C. and featured a man standing alongside a group of Proud Boys and wearing a t-shirt emblazoned with the cryptic text “6MWE.” This code for “6 Million Wasn’t Enough” is a not-so-veiled reference to the Holocaust.

The man, who has not yet been identified, also wore a Proud Boys baseball hat and the skull face mask popular among -- but not exclusive to -- right-wing subcultures like accelerationists and boogaloo bois. The t-shirt featured the Proud Boys’ black-and-yellow color scheme and a black-and-yellow flag design, as well as the letters “RWDS”- which stands for “Right Wing Death Squad.” Given the ubiquity of these symbols and words within the Proud Boys organization, it is extremely likely that the man is a member of the group.

This was just the latest in a series of racist and antisemitic incidents tied to the Proud Boys, a right-wing extremist group with a long track record of violence. Members of the group have always (loudly) insisted that they are not racist. In the face of any accusation of antisemitism or white supremacy, they make a show of pointing to their Cuban-American leader, their Black and Latino members or their chapter in Israel.

Proud Boys leadership has carefully crafted a public image of an inclusive club for men of all races, backgrounds and sexual orientations who subscribe to one mantra: The West (i.e. “Western” culture) is best, and anyone who “opposes” it (“leftists” of all stripes and feminists, among others) is the enemy.

The group has been remarkably successful at building a brand, and they have become popular public allies and security providers for a host of right-wing and conservative activists and politicians –  even getting a shout-out from President Trump. Proud Boys leader Enrique Tarrio seems to understand that expressing overt antisemitism or racism would not help them, and Tarrio’s continuing assurances of anti-racism as well as his own Latino background provide the Proud Boys with a ready way to defend themselves against charges of bigotry.

But the actions of the group’s members and even leadership have repeatedly belied the official party line.

At the December 12 pro-Trump rally in Washington, D.C., a member of the Proud Boys attacked a counter-protester while someone simultaneously screamed, “Fucking Jew.” The incident was captured on video, which ADL has reviewed.

Later that night, Tarrio, alongside an unidentified member of the Proud Boys, tore down and set fire to a Black Lives Matter banner outside the Asbury Methodist Church, one of the oldest Black churches in Washington, D.C. Tarrio later claimed that the attack was not motivated by race, but because “BLM is a Marxist movement,” adding, “the burning of this banner wasn’t about race religion [sic] or political ideology it [sic] was about a racist movement that has terrorized the citizens of this country.”

Whatever Tarrio’s stated reasons, tearing a Black Lives Matter banner from a historically Black church is clearly an act of profound bigotry and is, according to the Washington Post, being investigated as a potential hate crime by the Washington, D.C. police department.

The Proud Boys’ history of racist associations goes back to its founding. The 2016 creation of the group was first announced in Taki’s Magazine, a right-wing publication that has published virulent racists like Jared Taylor and Richard Spencer. Since then, there have been many examples of close ties between Proud Boys and racist right-wing extremists.

In 2017 members of the Proud Boys marched at the deadly Unite the Right rally in Charlottesville, although the organization denounced the event and warned members that they would be banned from the group if they marched. At the time of the event, Unite the Right’s organizer Jason Kessler was a member of the group.

Brien James, Proud Boys chapter president in Indiana, is a former neo-Nazi skinhead and founder of the ultra-violent Vinlanders Social Club. Another man who very briefly held a leadership position in the Proud Boys recently attempted to join neo-Nazi terror group The Base, and former Proud Boy Chris Hood currently runs the neo-Nazi group NSC-131. Yet another member of the Proud Boys, Paul Skinner, is a former active member of the neo-Nazi National Socialist Movement, according to documents obtained by ADL.

The many links between Proud Boys and white supremacist groups don’t end there.

A member of the Proud Boys known as “Hammy” ran the now deleted Telegram channel “Hammy’s Cesspool of Bullshit” where he posted white-supremacist memes, calls for violence against journalists and minorities, and self-portraits where he posed in skull masks and with Confederate flags. “Hammy” was once a candidate for Elder, a member of the Proud Boys’ guiding council.

In the fall of 2020, Kyle Chapman, a white supremacist and Proud Boy also known as Based Stickman, launched a coup attempt within the Proud Boys, announcing, “We will no longer cuck to the left by appointing token negros as our leaders. We will no longer allow homosexuals or other ‘undesirables’ into our ranks. We will confront the Zionist criminals who wish to destroy our civilization. We recognize that the West was built by the White Race alone and we owe nothing to any other race.”

His attempted revolt, whether it was a trolling attempt or a sincere effort, failed spectacularly. But Chapman did receive significant support from people on Telegram claiming to be members of Proud Boys who said they would like to be more “open” about their white supremacist views.

It has become glaringly obvious that despite their loud and persistent denials, the Proud Boys are all too willing to embrace racists, antisemites and bigots of all kinds as long as they subscribe to the superiority of “western” civilization. The Proud Boys powerfully illustrate that an organization with a Latino leader and Jewish members is quite capable of racism and antisemitism.