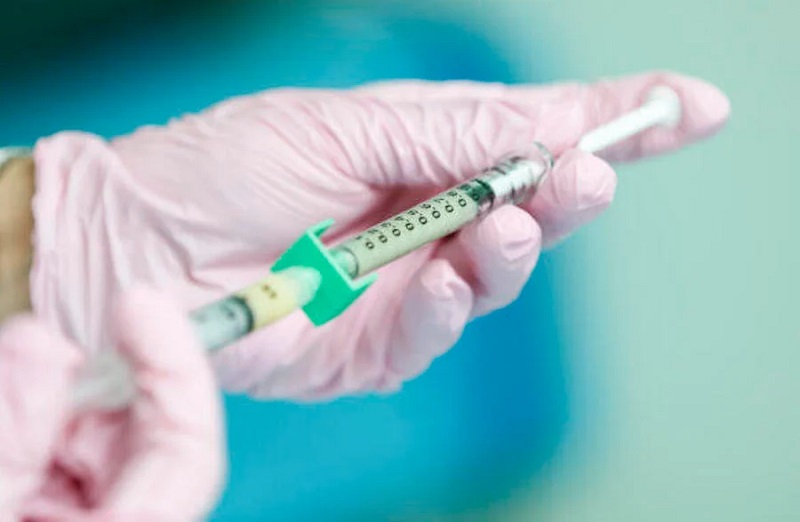 Since the beginning of the coronavirus pandemic, extremists across the ideological spectrum have used the virus as a platform for elaborate and alarming conspiracy theories. In March and April 2020, antisemitic, anti-government and Sinophobic conspiracies about the virus’s origins and “true purpose” were rampant online. In December 2020, as the COVID-19 vaccine was being shipped to frontline workers across the country, very familiar conspiracy theories took root in online spaces alongside mainstream concerns about vaccine distribution and effectiveness.

Purveyors of these theories suggest that the vaccine is a new form of population control or elevate debunked fears about the vaccine’s side effects. Some are peddling antisemitic tropes about Jewish control of the virus and vaccine, while arguing that Black Americans should be used to test the vaccine’s safety.

The following are a sampling of these conspiracy theories circulating online:

Antisemitism has been an ongoing theme since the pandemic began, with conspiracies alleging that Jews are behind the coronavirus and are using it as a tool to expand global influence and derive profit. As countries begin administering the vaccine, Jews are once again the target of antisemitic conspiracies, mostly aimed at dissuading people from being vaccinated. 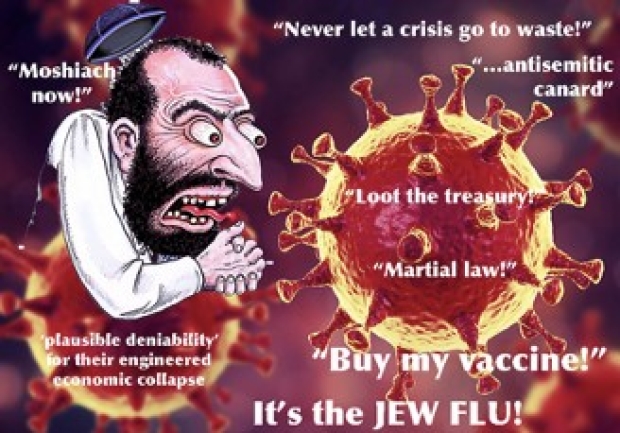 Much of the antisemitic messaging around the vaccine highlights Pfizer CEO Albert Bourla’s Jewish heritage. This fact provides antisemites with “evidence” that the widespread vaccine effort is part of a calculated, long-term Jewish plot to institute a “Global Jew Government,” a new iteration of the age-old canard of international Jewish control.

Some believe Jews will achieve this power by using the vaccine ingredients to sterilize the “white race.” Still others assert that the “ZOG” (Zionist Occupied Government) plans to “enslave of all humanity” by preventing the unvaccinated from working, travelling or going to school.

These antisemitic theories of the “Jew Vaccine” proliferate across white supremacist and neo-Nazi websites like Stormfront and The Daily Stormer, as well as in antisemitic and coronavirus conspiracy social media channels. One conspiracy, posted to the white supremacist website Stormfront, alleges: “The Jews vaccine changes DNA so that the DNA itself will produce any proteins that the Jews program it to produce via 5G. This gives the Jews the ability to kill you by using 5G to tell the DNA to produce poisons.” 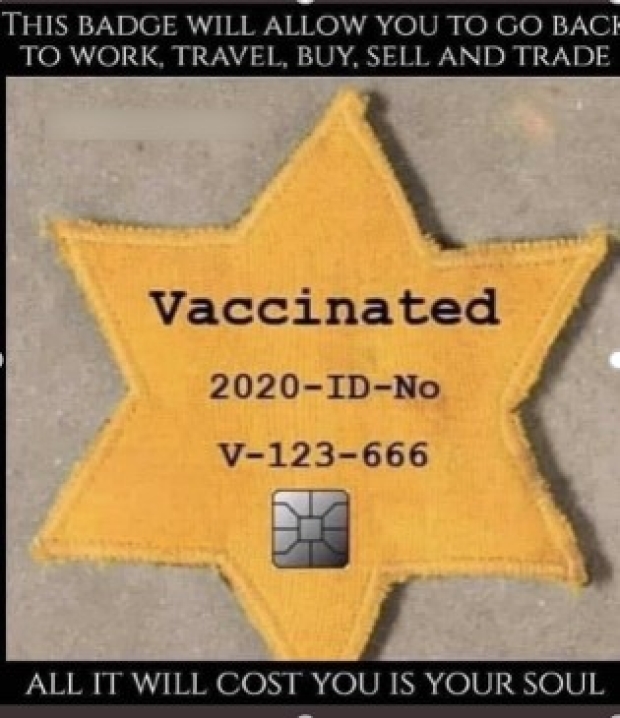 Others evoke the Holocaust when discussing the vaccine. A Greek newspaper compared Pfizer CEO Bourla, who was born in Greece, to Nazi war criminal Josef Mengele, known for his gruesome medical experiments on concentration camp prisoners. A UK newspaper printed an image of the entrance to Auschwitz, changing the iconic “Arbeit Macht Frei” to “Vaccines are Safe Path to Freedom,” and vaccination cards have been compared to the yellow star Jews were forced to wear in Nazi Germany.

The Nation of Islam (NOI) strongly rejects current vaccination efforts – demonstrating a combination of general anxiety about vaccines and the history of medical experimentation on vulnerable populations of color, as well as conspiratorial claims alleging that the coronavirus vaccines were designed to intentionally harm Black people. NOI leader Louis Farrakhan asserts that the coronavirus vaccines are part of a “satanic” US government depopulation plot and that they are “shots of toxic waste” and a means to “quicken death” among Black people. In warning against the coronavirus vaccines, various NOI sources, including prominent national leaders and official social media channels, have implicated Jews in a larger conspiracy to target Black populations through vaccines. During a December 6 sermon broadcast live from NOI headquarters at Chicago’s Mosque Maryam, Student Minister Ishmael Muhammad repeated Farrakhan’s 2013 claim that Jews are given a special version of the flu shot, while other populations receive one with toxic chemical additives. In his December 20 sermon, Muhammad also referenced the “Synagogue of Satan” (an antisemitic phrase used to refer to Jews) for allegedly promoting vaccines to sterilize Black people.

For decades prior to the coronavirus pandemic, some anti-government extremists warned that vaccines could be used as a means of extending government control over the population or even as a tool to depopulate the United States. Across anti-government forums, the announcement of a vaccine rollout has been met with deep skepticism and fear. Many people have announced that they will refuse the vaccine.

True to their anti-government beliefs, some have asserted that the vaccine is part of a nefarious government plot, though they differ on the putative objective. Some argue that it is part of a depopulation effort, perhaps to bring the narrative into accordance with conspiracy theorists’ darkest beliefs regarding Agenda 21 or Agenda 2030 – voluntary United Nations programs designed to help countries meet sustainability goals, which some conspiracists believe will be used to take away civil rights.

Others assert that the vaccine will usher in mass surveillance by injecting microchips directly into people. As one user wrote on mymilitia.com, “They’ve been working on a nano drug delivery system for almost a decade but probably longer… there is absolutely no doubt in my mind that this is the catalyst for complete surveillance, monitoring, and future banking/money for anyone who survives anyway.” Still others have shared articles about the Centers for Disease Control and Prevention’s “immunity cards” as proof that the vaccine is part of a governmental effort to infringe on people’s liberty by requiring people to prove they have been vaccinated before traveling.

Militia boards users express fear that the coronavirus vaccines are part of a globalist or foreign (usually Chinese) plot to lay the groundwork for an invasion. Posters are sharing articles alleging that Chinese agents have infiltrated the pharmaceutical companies manufacturing the vaccines and intend to use the injections as part of “unrestricted warfare” to poison the U.S. military, leaving it incapable of fending off an invasion. As one commenter warns, “Corona virus (covid-19) is a man-made bio-weapon created by the Chi-Coms by splicing AIDS, SARS, and a Corona Virus” [sic]. Adds another, “They are attacking just not with bullets and bombs.”

Those who populate the numerous QAnon-centric online spaces are similarly skeptical when it comes to the COVID-19 vaccine, with concerns ranging from the efficacy and alleged undisclosed side effects of the vaccine to the existence of the vaccine itself.

In early December, as the vaccine roll-out began in Europe, an article posted on the right-wing and conspiratorial website “Health & Money” began to circulate on niche social media platforms like Gab, Parler and MeWe. The article quoted two scientists, one of whom once worked for Pfizer, warning that the Pfizer vaccine might lead to infertility in women. While the article was thoroughly debunked, it was picked up by many popular QAnon influencers who spun the story into narratives about forced sterilization, population control and genocide. 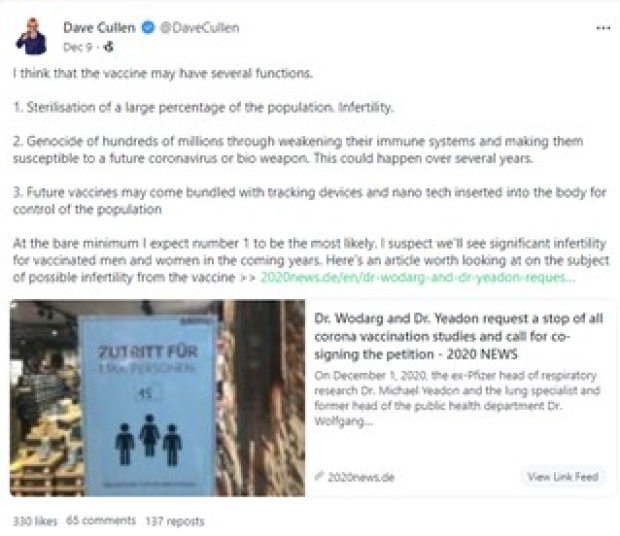 Some took this even further, speculating that the COVID-19 vaccine contains nanobots and technology to connect the recipient to a “global hive mind.”

When ostensibly mainstream conservative voices raise doubts about the vaccine, their baseless claims are picked up – and further amplified by – Qanon adherents.

For example, Sidney Powell, formerly part of President Trump’s legal team, joined the many voices warning about the alleged downsides of the vaccine. On December 4, in response to reports of government-issued vaccination cards, Powell tweeted: “NO WAY #America. This is more authoritarian communist control imported straight from #China.” 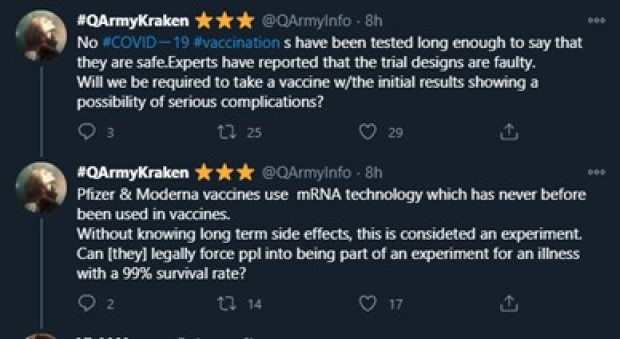 QAnon conspiracy theorists also express more conventional concerns about the vaccines, alleging that their long-term success is unproven, and their long-term side effects are unknown. But they take it a step further, claiming the vaccine is part of a massive, global experiment designed to permanently alter humans’ genetic makeup.

Finally, there are those who believe that the vaccine does not exist at all. This theory is an extension of the claim that COVID-19 was entirely a hoax. Some who subscribe to the hoax theory believe that the people receiving the vaccine publicly are actors who have been hired to make the charade seem real.

White supremacists have also adopted conspiracy theories about the vaccine’s nefarious purpose and theoretical side effects. Despite statements from medical professionals assuring the public of the vaccine’s safety, online white supremacist spaces continue to push claims that the vaccine will permanently alter white DNA and will sterilize or even kill the recipient. The vaccine is seen by some as another coordinated attack against white people and a threat to the future of white children.

Some white supremacists have turned this “population control” conspiracy into a racist advocacy mission, pushing the hashtag “VaxTheBlacks,” and urging people of color to get vaccinated. The rationale, according to one Telegram poster: “if you protected a sizeable portion of Whites from the sterilisation [sic] vaccine; the world would be ripe for the reconquering by the Aryan man.” 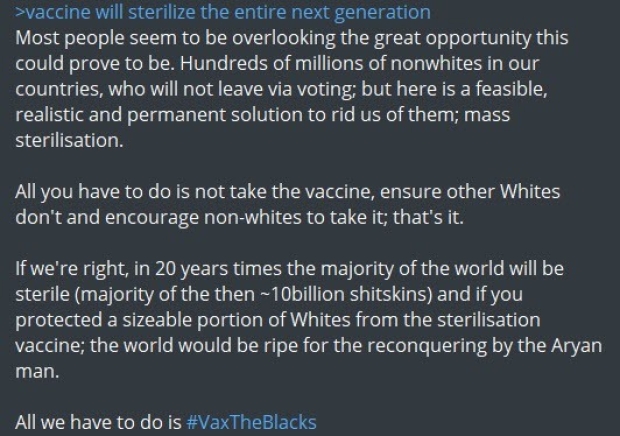 The “VaxTheBlacks” hashtag is spreading across white supremacist social media channels, couched as fake concern for the Black community, which has been disproportionally impacted by coronavirus. They offer to give up their place in their vaccine line so that more people of color can be prioritized (and therefore, according to their conspiracy, sterilized or harmed). One Telegram user posted: “To make reparations for the hardship of White colonialism, blacks should get free COVID vaccinations and get the injections first to protect them from the pandemic” while another responded to the vaccination of Sandra Lindsay, a New York City nurse and the first American to receive the vaccine, with a post reading, “I'm so proud that the first person to receive this vaccine was a much-disenfranchised person of color. We have come so far as a society. All I ask now is that whites continue to realize their privilege and get out of the way. Make sure every black person has gotten the vaccine before a single white decides to get it.” 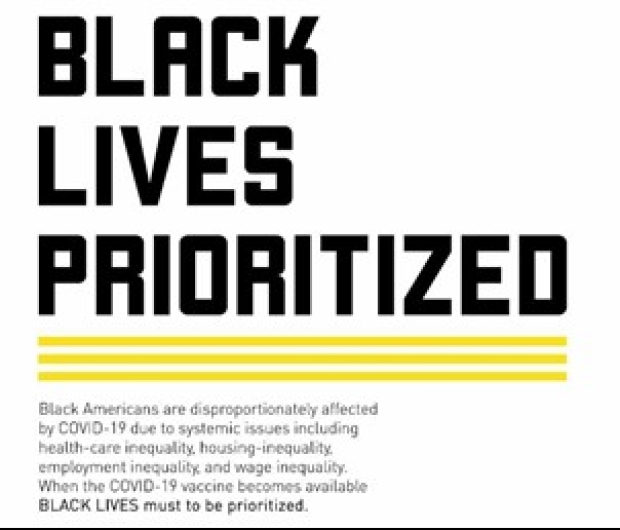 This weaponization of the vaccine mirrors the early days of the pandemic, when white supremacists posted memes encouraging people to intentionally infect elected officials and marginalized communities with the virus.

Characteristically, other white supremacists — generally from the accelerationist fringe whose goal is to speed up the eventual downfall of society — see the vaccine and distribution plans as further opportunity for conflict. Accelerationists believe the current American system is rotten, due to Jewish control, and should be eliminated. Federal and state efforts to control the spread of coronavirus are evidence of this rot. 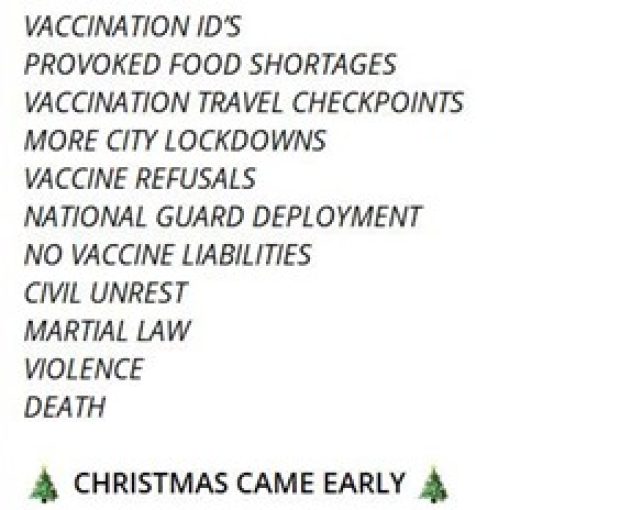