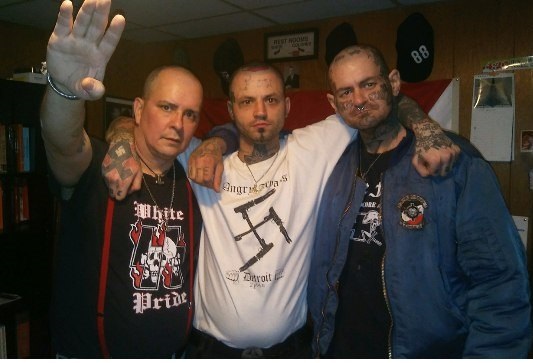 UPDATE: In early March 2018, federal prosecutors revealed that members of Aryan Strikeforce talked about committing a suicide bombing attack on counter-protestors at a November 2016 white supremacist rally in Harrisburg, PA.  The attack would have been perpetrated by a terminally ill member of the group, who planned to hide the bomb in his portable oxygen tank.  There is no indication that the plan, which displayed a type of delusional thinking that’s typical among white supremacist groups, ever advanced beyond the discussion phase.

In June 2017, racist skinhead Cameron “Twisted Lonewolf” Anthony, of Arlington, Massachusetts, was arrested after allegedly using a baseball bat to threaten a Latino man, while simultaneously brandishing a knife and shouting “white power.” Anthony, who was charged with assault with a dangerous weapon and civil rights violations, has been connected to the Aryan Strikeforce crew since 2014.

Anthony’s arrest was just the most recent bad news for Aryan Strikeforce. In the past eight month, eight members of the racist skinhead crew have been arrested on charges ranging from money laundering to illegal weapons possession. While this string of arrests almost certainly heralds the end of the crew in its current form, its members have a habit of resurfacing after serving jail time.

In April, six AS members and associates, including high-ranking members of the group, were arrested in a multi-state sting operation. The six were allegedly involved in what was actually an undercover law enforcement operation, illegally selling guns, transporting bags filled with what they thought was methamphetamine, and trading cash and gift cards for illegal weapons.

Among those arrested were Aryan Strikeforce founder Joshua “Hatchet” Steever (of New Jersey), Aryan Strikeforce chaplain Jacob “Boots” Robards and Aryan Strikeforce President Henry Baird (both of Pennsylvania), Aryan Strikeforce vice president Stephen Davis and Justin “Rocko” Lough (both from Virginia), and Aryan Strikeforce sergeant at arms Connor Dykes (of Maryland). All six have been indicted on weapons and drug charges including interstate travel in aid of racketeering, conspiracy to distribute and attempted distribution of controlled substance, money laundering, transport, delivery, and receipt of unregistered machine guns, and possession of firearm by a convicted felon. They are currently awaiting trial.

The group’s run of trouble extends all the way back to October 2016, when Aryan Strikeforce’s “Vinland Division President”, Ronald “Dozer” Pulcher II (of Pennsylvania), was arrested after Pennsylvania state police found drugs and weapons at Pulcher’s home. Pulcher pleaded guilty to felony illegal possession of a firearm and possession with the intent to sell drugs, which earned him a sentence of up to five years in state prison.

Most of those arrested over the last eight months are convicted felons, many of them violent. Some also have a history of committing racially-motivated offenses.

While April’s mass arrest is likely the death knell for the current iteration of Aryan Strikeforce, and founder Joshua Steever stands to spend a lot of time in prison if he’s convicted on any of the serious charges pending against him, we may see this crew again. If Steever’s past behavior is any indicator, he won’t let incarceration stand in the way of creating a new white supremacist group -- just as soon as he possibly can.