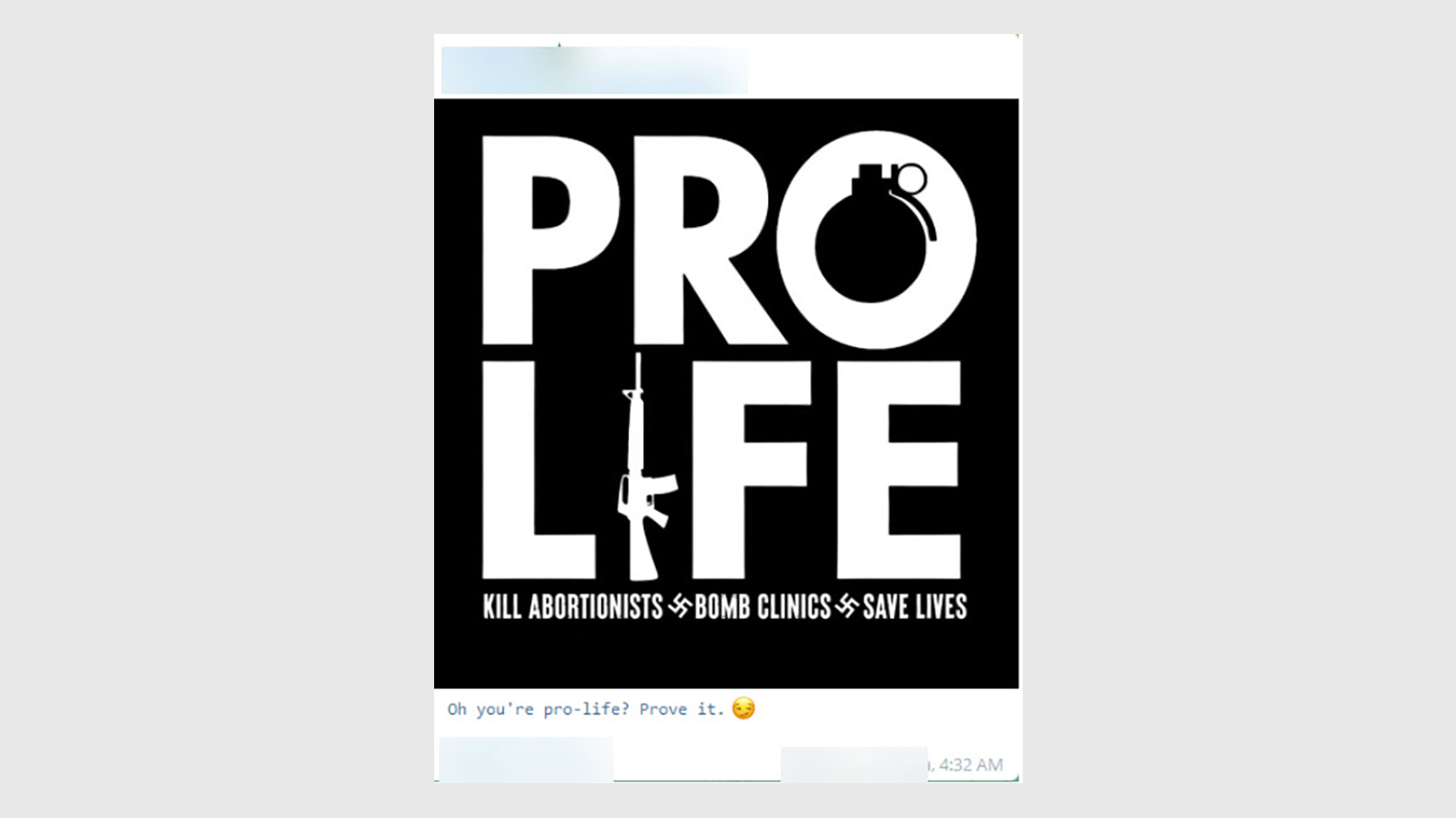 The May 2, 2022, leak of the draft opinion overturning the 1973 Roe v. Wade ruling has animated people on both sides of the abortion debate. And as pro-choice advocates are vowing to protest the potential loss of reproductive freedom, right-wing extremists advocating for — and in some cases threatening — violence against them.

These threats of violence are largely happening in online spaces, where rhetoric and incitement gain oxygen in a dangerous echo chamber. The deadly, May 14, 2022, white supremacist massacre at a Buffalo supermarket powerfully underscores the potential for this online violent rhetoric to become action and may be an indicator of how far some extremists are willing to go to advance their cause. Crucially, it also makes clear that online platforms must take these threats of violence seriously.

As far as these extremists are concerned, the personhood and worthiness of women is only secure when they are fulfilling “appropriate” roles. A common thread among extremist anti-choice rhetoric: dehumanizing women who believe in the right to abortion. This is a strategy recognized by experts, including those at the Dangerous Speech Project, as having the potential to lead to “increased support for violence against another group.”

Violent anti-choice extremism has been an issue in the U.S. since the 1980s, and escalated in the early 1990s. What has changed is the public’s easy access to violent online rhetoric around these issues. Publicly accessible Telegram channels suggest to their followers that violence against pro-choice activists and institutions is not only acceptable, but necessary, and Telegram leaves it to the platform’s subscribers to decide for themselves whether they agree -- or are motivated to further action.

After the Colorado Springs Planned Parenthood shooting in 2015, Center on Extremism researchers highlighted the role that the demonization of abortion providers played in the “justification” of violent acts, even when such rhetoric did not directly call for violence. The most recent major case of anti-choice violence took place in Knoxville, Tennessee, when a December 2021 arson attack destroyed a Planned Parenthood clinic.

Today, violent anti-choice rhetoric is more accessible than ever before. When the draft decision to overturn Roe v. Wade was leaked, right-wing extremists flooded the encrypted social media messaging platform Telegram with memes and posts largely praising the leaked decision to overturn Roe v. Wade, and some posts moved beyond celebration to advocate for violence against pro-choice activists.

While Center on Extremism researchers have not found specific threats against pro-choice events or activists, the tenor of response from right-wing extremists strongly suggests a willingness to engage in violence in support of the anti-choice agenda.

The most ardent calls for violence on Telegram in response to pro-choice activism come from neo-Nazi accelerationist groups, whose members believe in hastening what they see as the inevitable collapse of society that they believe will culminate in a “race war.” Most white supremacists encourage abortion for non-white women, but believe it should be eliminated as a choice for white women, a stance they reiterated after Alabama passed a restrictive abortion ban in May 2019.

In a post to an accelerationist Telegram channel lists the names of individuals the admin has dubbed “saints” — individuals who have committed acts of violence against perceived pro-choice actors and institutions. Names include Robert Lewis Dear, who killed three people and wounded nine others at a Planned Parenthood in Colorado in 2015. The poster wrote, “If you’re ‘pro-life’ but aren’t prepared to follow in their footsteps...then you’re a LARPfag and you’re wasting your time. MAKE AN IMPACT or go home [emphasis theirs].” “LARP” is a reference to “Live Action Role Play.”

The accelerationist Telegram channel urges essentially the same kind of violence against pro-choice activists as it does against non-white people; posters argue that an anti-choice individual who is unwilling to make the sacrifices that past anti-choice extremist “saints” have made — attacking and murdering others for the anti-choice cause — has contributed nothing to the cause. The Telegram channel lays out the groundwork for violent, extremist anti-choice action, urging violent means with the promise of infamy.

Another meme circulating on accelerationist Telegram channels features the capital letters “PRO LIFE” superimposed with a bomb and rifle and the words, “KILL ABORTIONISTS, BOMB CLININCS, SAVE LIVES.” Below the image, the post is captioned, “Oh you’re pro-life? Prove it.” Another poster on an accelerationist channel wrote, “You're looking up contact information of abortion providers to get in touch in case you need to kill your baby...I'm looking up contact information of abortion providers so I can ambush them in their driveway and make them disappear...we are not the same.” Again, there is no moderation on a platform that is urging followers to prove their commitment to the anti-choice cause through violent means.

Threats of violence against pro-choice activists are also emerging in other popular white supremacist Telegram channels. Nicholas Fuentes, a white supremacist organizer, wrote, “Hey women we are gonna [sic] put y’all back in chains (you can’t murder babies anymore).” This message elicited thousands of “smiling face” reactions. An individual wearing a hat associated with the Groypers, a loose network of white supremacists who are vocal supporters of Nicholas Fuentes, was recorded praying at an anti-choice rally on May 8, 2022, and taunting pro-choice protesters, shouting, “Not your body, not your choice. Your body is mine.” This suggests Fuentes’ acolytes may take an active role in future rallies. 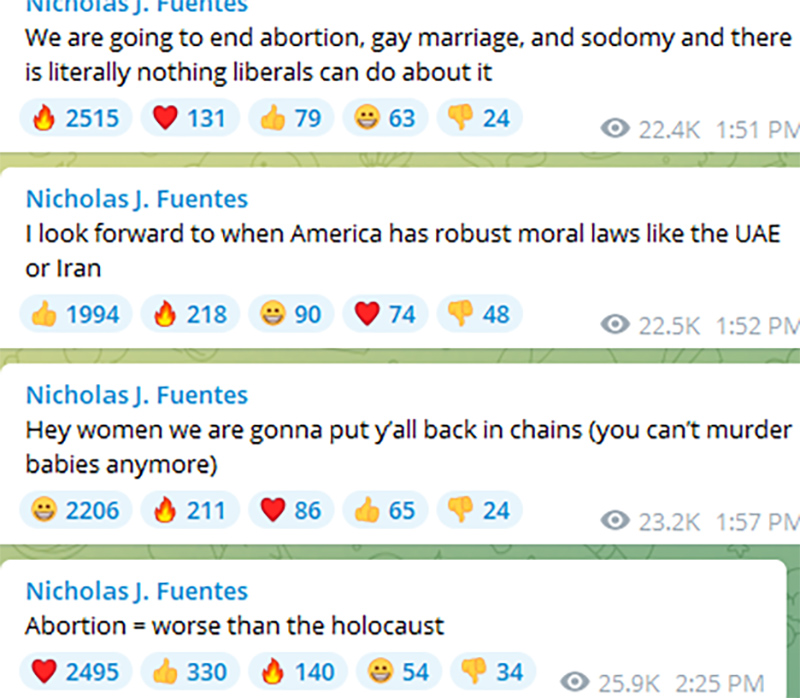 Other right-wing extremist groups have likewise broadcast their opinions and advocacy of violence. The violence-prone Proud Boys have highlighted their own misogyny  with the creation of a new Telegram channel called “Not Proud of Your Abortion.” The new channel features memes and posts calling women who might choose to get an abortion “degenerate sluts,” “trashy whores” and “cum dumpsters.” Some Proud Boys members also protested and taunted pro-choice women by showing up to a protest outside of the U.S. Supreme Court on May 4, 2022, with a sign that had several coat hangers attached to the bottom. In an explanation on Telegram, the Maryland-DC Proud Boys chapter explained that they were encouraging “leftists” to get abortions so they can “out breed them and save our society one hanger at [a] time.” 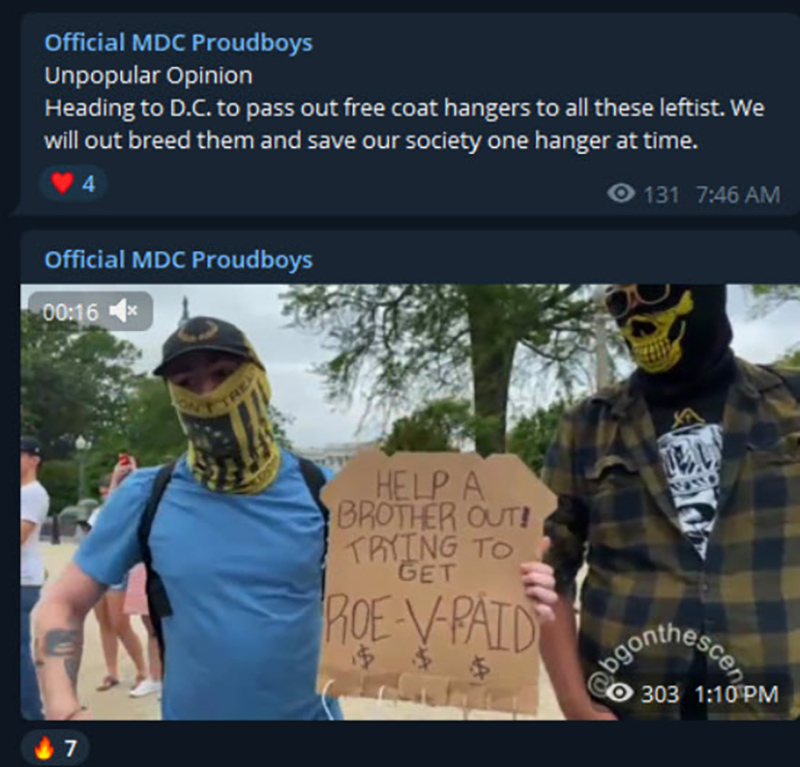 The Cape Fear chapter of Proud Boys also suggested that if pro-choice protests came to their area, that participants should be concerned for their “personal safety and physical well-being” and warned, “We highly recommend that you don’t attempt this in our town.” The group has a history of violence in “defense” of their beliefs: In August 2021, in Salem, OR Proud Boys members violently clashed with anti-fascist protesters outside a Planned Parenthood. Approximately 20 Proud Boys allegedly attended the protest event to act as “security” for the anti-choice protesters before a large fight broke out culminating in two arrests. Reportedly, Proud Boys armed with air-soft rifles "were the first to mace anti-fascists armed with shields and batons." 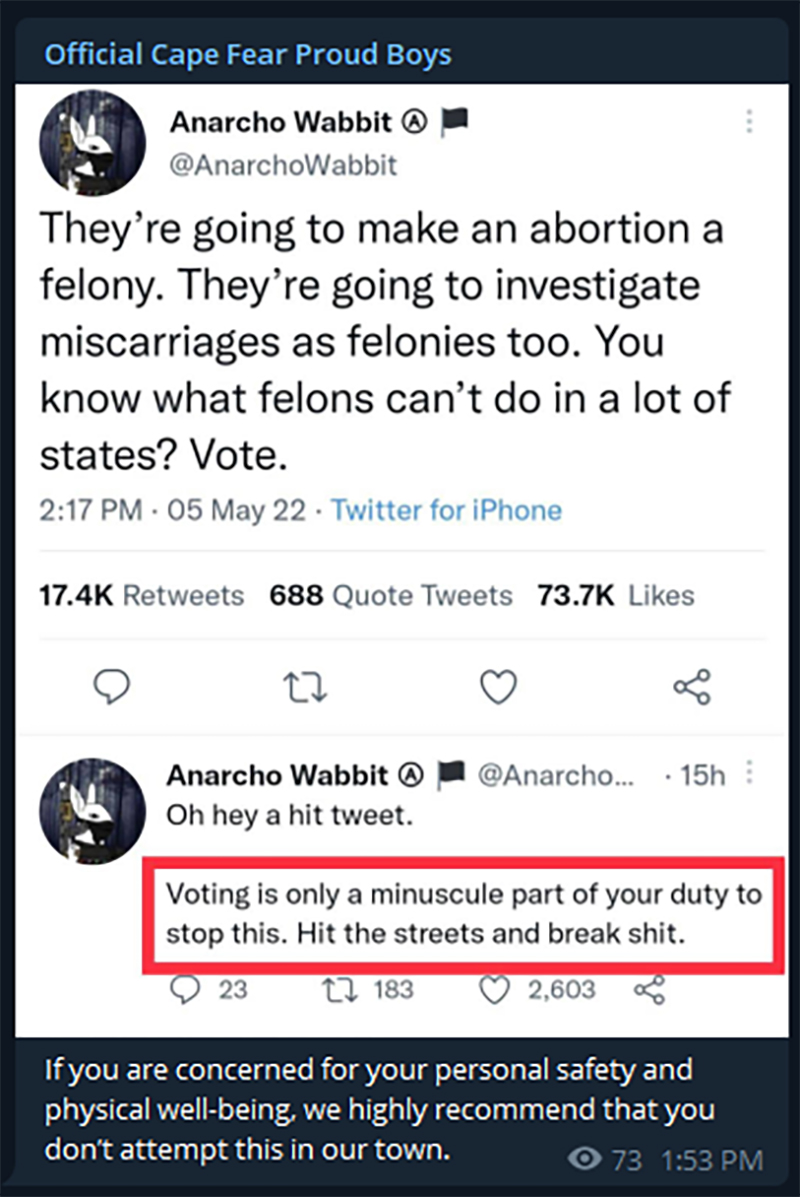 In more anonymous online forums of the far-right “.win network,” we have also seen calls for violence that are not attributable to a specific group or individual. News articles about pro-choice protesters outside a church prompted the comments, “In a rational society, these demons would have been shot on sight” and, “Each church needs its own holy guard to smash these goblins in the face with a shield...if they don’t stay back.”