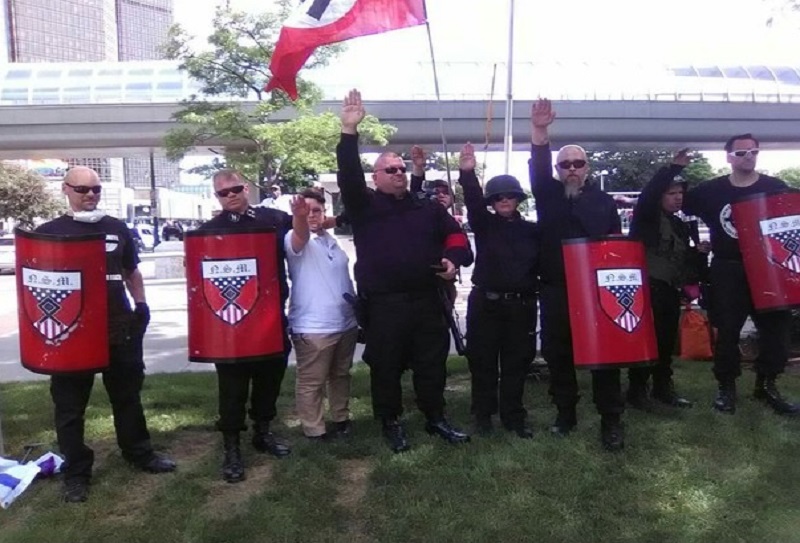 NSM leader Burt Colucci and Aric Lemieux, NSM’s South Michigan chapter leader, headed up the protest, which included participants from Florida, Tennessee, Kentucky, Massachusetts and Michigan. Lemieux expressed his intention to protest the festival months ago, and other group members joined in. The NSM, which was formerly based in Detroit, has a long history of protesting Pride events.  It is also a defendant in a lawsuit stemming from the Unite the Right rally in Charlottesville, VA in 2017. 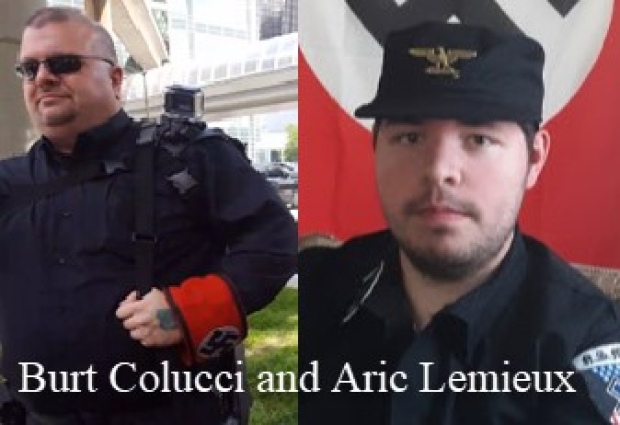 As police escorted the group to a designated protest area, members of the group shouted obscenities at festival attendees. Inside the protest area, Mike Schloar, a longtime NSM member from Tennessee, posed as if he were urinating on an Israeli flag. The group went on to create event “souvenirs,” per their social media accounts, by tearing the flag to pieces. They also stomped on and destroyed a rainbow flag and shouted or chanted white supremacist slogans and obscenities including, “f**k you faggots,” “Sieg Heil,” “white power,” “our streets,” “blood and soil,” “white lives matter” and “Jews will not replace us.”

Founded in 1994, the NSM is currently helmed by longtime member Burt Colucci, of Kissimmee, Florida. Colucci took power in 2019 when longtime leader Jeff Schoep stepped down after James Hart Stern, a black civil rights activist who had previously taken over and dissolved a KKK organization, claimed to take over the NSM with the goal of undermining it.

Stern and Colucci continue to battle over ownership of the group. Both have filed corporate registrations for the NSM in their home states, Stern in California and Colucci in Florida.

Despite Stern’s claims of leadership, Colucci continues to operate the group’s website and has reverted to NSM’s original logo, which includes a swastika. From November 2016 through March 2019, Schoep, in an effort to make the group appear more mainstream, used a logo featuring the more innocuous-looking Othala Rune.

The NSM has been in decline for several years, and the ongoing struggle over leadership has clearly hurt the group. For the first time in many years, the NSM failed to hold their annual April rally. Their last public rally, held on November 10, 2018, in Little Rock, Arkansas, drew just 20 participants.

The last significant rally organized by the NSM was the White Lives Matter event in November 2017. The event in Shelbyville, Tennessee, attracted 200 white supremacists, including several dozen NSM members, as well as members of groups associated with their now-defunct umbrella organization, the Nationalist Front.