Tucker Carlson’s Dangerous Propaganda: The Government is Coming for You 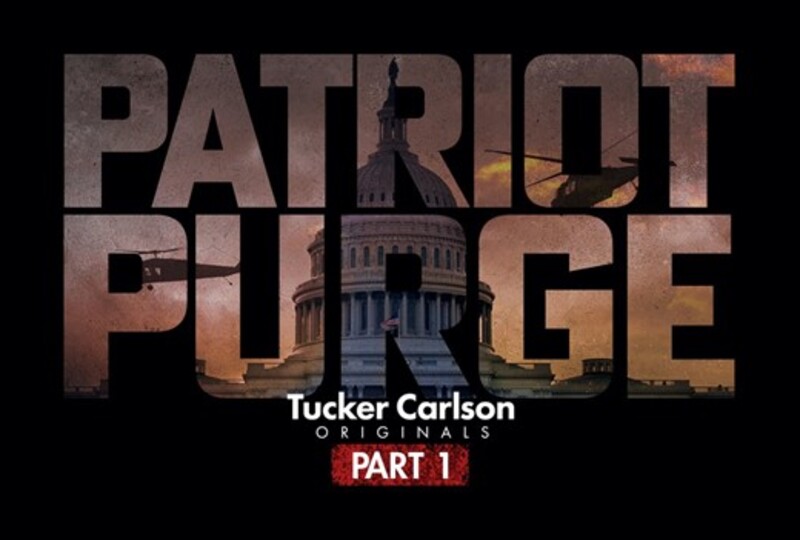 Tucker Carlson’s special “documentary” series, “Patriot Purge,” which aired online the first week of November, 2021, via the Fox Nation streaming service, promotes many of the false conspiracy theories  Carlson promotes on his regular show on Fox News—the Biden Administration is on a “manhunt” for conservatives; the FBI played a role in the January 6 insurrection; the military wants to purge any soldier whose point of view differs from that of the current government; and finally, that the new “second war on terror” is aimed at what Carlson calls “legacy Americans” who will be labeled “domestic terrorists,” put in a government database and imprisoned in solitary confinement.

This series, however, delves further into these conspiracies, engaging in a cynical and dangerous attempt to convince Trump supporters and conservatives that they are literally under attack -- and that the January 6 insurrection was a “false flag” orchestrated by the federal government to impugn conservatives. Carlson’s manipulative use of footage and sources signals to viewers that there is a war in America, and they need to be prepared to fight back. Given the fact that these dangerous conspiracy theories are often discussed by far right extremists in online forums, and the fact that the Jan. 6 insurrection was ignited by similar conspiracies, these dangerous  ideas could potentially lead to future violence.

While Carlson characterizes “Patriot Purge” as a documentary, the three-part series is entirely lacking in objectivity and frequently sidesteps the truth. The interviews and news footage used in the piece—which includes reels of Nazis marching during World War II overlaid with discussions of the Biden Administration—are used to paint a picture of government repression and impending danger facing American conservatives.

Some of Carlson’s tactics in the series include:

Most of the sources used in “Patriot Purge” are right-wing activists and Trump supporters who have promoted election fraud or have downplayed the insurrection in a variety of ways.  Some played an active role in the insurrection.

Ali Alexander is a far-right activist, provocateur and conspiracy theorist who was an organizer of the post-election Stop the Steal rallies. He also helped planned the pro-Trump rally in DC on January 6.

Richard Barnett is a self-proclaimed white nationalist who was arrested following his role in the Jan. 6 Capitol insurrection. Barnett was infamously photographed sitting with his feet on House Speaker Nancy Pelosi’s desk.

Darren Beattie was a speechwriter in the Trump Administration who was forced to resign in 2018 after it was revealed that he was a speaker at a white nationalist event. Beattie runs Revolver, an online publication that promotes conspiracy theories, particularly about the January 6 insurrection. Beattie often appears on Tucker Carlson Tonight.

Tayler Hansen is an independent journalist who has written for the right-wing, conspiracy-oriented publication Gateway Pundit. He has repeatedly peddled conspiracy theories about the Jan. 6 insurrection and called for “justice” for Ashli Babbitt. He was in the Capitol building on Jan. 6, and filmed Babbitt getting shot.

Paul and Marilyn Hueper are being investigated by the FBI in connection with the Jan. 6 insurrection, although they have not yet been charged. In late April 2021, the FBI raided their Alaska home in search of a laptop belonging to Nancy Pelosi. The Huepers have maintained that Marilyn did not take the laptop; they admit to being on Capitol grounds on Jan. 6 but deny entering the Capitol building.

Mark Ibrahim is a former DEA agent who was arrested in July 2021 for his alleged participation in the Jan. 6 Capitol insurrection. According to court documents, Ibrahim posed for multiple photos while displaying his DEA badge and service weapon. He is facing charges for entering restricted grounds while carrying a deadly weapon and lying to federal agents; he does not appear to have entered the Capitol building.

Joseph McBride is the defense attorney for Capitol insurrection defendant Richard Barnett. During a July appearance on CNN, McBride compared the U.S. government’s treatment of accused Jan. 6 insurrectionists to that of “Nazis” and the “Russian gulags.” In June, he and Barnett appeared on VGTRK, a Russian state-owned TV network, where they discussed Barnett’s upcoming trial and complained about U.S. jail conditions.

Emily Grace Rainey is a U.S. Army Captain based at Fort Bragg. The Army opened an investigation into her participation in events surrounding the Jan. 6 Capitol insurrection. It is unclear whether she was sanctioned by the Army, and she has not been criminally charged by the FBI in relation to Jan. 6. Rainey helped lead a group of about 100 people from Moore County, NC to D.C. on Jan. 6.

Elijah Schaffer is a reporter for Blaze and co-hosts the BlazeTV show You Are Here with Sydney Watson. Last month (Oct. 10), Schaffer tweeted a neo-Nazi meme depicting Mark McCloskey (the man who pointed his gun at BLM protesters last year) wearing a skull mask and standing in front of a sonnenrad with the caption “I just wanted to grill.” He deleted it shortly after. Schaffer entered the Capitol building on Jan. 6; he has not been charged. He has promoted claims about election fraud, writing that the “decision to certify the election was its own insurrection,” and Covid-19 misinformation.

J. Michael Waller is a senior analyst at the Center for Security Policy, former instructor at the Naval Postgraduate School, and a lecturer at the John F. Kennedy Special Warfare Center and School at Fort Bragg. Waller began promoting Jan. 6 conspiracy theories within days of the insurrection, writing in a Jan. 14 article for The Federalist that he saw “agents-provocateurs” and “Fake Trump protesters.”