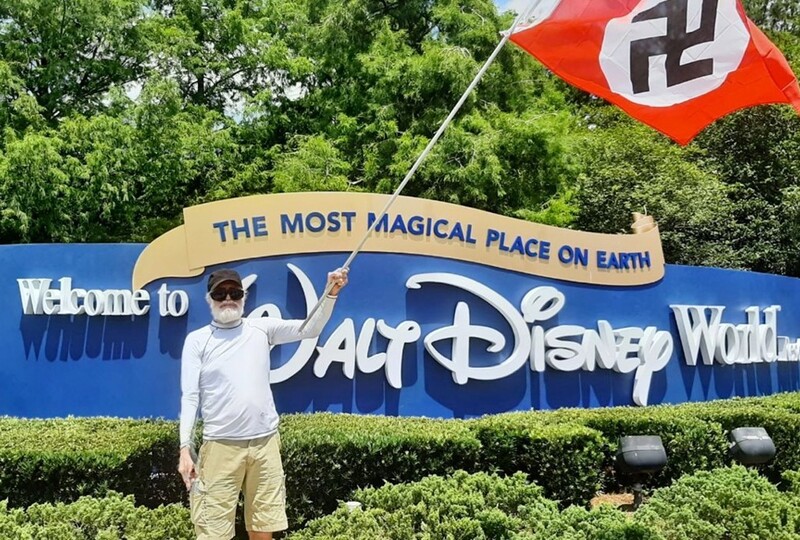 On May 7, 2022, a small group of neo-Nazis stationed themselves outside the entrance to Walt Disney World in Orlando, Florida, waving swastika flags and shouting into a megaphone. Among them was a man who goes by the name “Grandfather” on social media. The ADL Center on Extremism (COE) has identified him, with a high degree of certainty, as 74-year-old veteran David Howard Wydner, who has a significant history of antisemitic stunts.

“Grandfather” came to the attention of COE analysts after he engaged in a racist and homophobic rant at a Best Buy in Port Richey, Florida that was caught on video and shared on YouTube on December 12, 2021. In the video, Wydner is seen screaming and cursing at Best Buy staff, shouting “White Power” and the antisemitic catchphrase “the goyim know,” and showing off his swastika tattoo. COE researchers recognized him when he participated in a December 18, 2021, White Lives Matter (WLM) event in Deland, Florida, wearing a National Socialist Movement (NSM) branded shirt and hat. The following day, he was spotted by analysts again, this time participating in a banner drop with members of the Goyim Defense League (GDL) in Port Saint John, Florida, on the Ranch Road overpass above I-95, which included a banner that read: "Expel the Jews 2022.”

Wydner’s active affiliation with NSM, WLM, and GDL illustrates a recent trend of members of white supremacist, neo-Nazi and antisemitic networks coming together to engage in propaganda and protest efforts. NSM, a national neo-Nazi group that was once the largest and most prominent neo-Nazi group in the United States, calls for an all-white “greater America” that would deny citizenship and virtually all legal protection to non-whites, Jews and the LGBTQ+ community.

While NSM’s numbers have dwindled of late, WLM has seen a surge of engagement since it came on the scene in the Spring of 2021. This national network of white supremacists engages in “pro-white activism” on a designated day each month and advocates for raising “white racial consciousness” and the eventual formation of white ethnostates in North America, Europe and Australia. Individuals involved with both groups have joined up with GDL, a loose network of individuals connected by their virulent antisemitism, to participate in their antisemitic antics. In a post in the GDL Telegram channel, Wydner highlighted his appreciation for the intersection of multiple groups, writing “I was so thankful and honored to hang out with ya’ll on irl-day-Orlando. It was ‘POW! Right in the Jew’s face. One of those most memorable days in my life.’” (“irl” stands for “In Real Life”).

Wydner's online footprint shows a consistent narrative of extreme antisemitism, racism and bigotry. He promotes NSM on all his accounts known to COE, incorporating the group’s name in his online handles and sharing the group’s website on his profiles. On Stormfront, the oldest and largest white supremacist website, Wydner has posted more than 300 times under the username “Grandfather88,” often signing his posts with the NSM website and the claim that “The NSM is the ultimate expression of our constantly strengthening will.” The 88 reference is a nod to Adolf Hitler, with “88” representing a numerical code for “Heil Hitler” in white supremacist spaces. On Telegram, an encrypted social media platform rife with extremist channels, he is active in the NSM chats, promoting violence against Jews. In one conversation, he wrote “...we’ve seen what the Jews can do. They’ve turned Earth into hell. Now it’s our turn,” to which another user replied, “Yes Grandfather, its [sic] time for a real Holocaust to happen.” In another post, he suggested he will be the one digging mass graves after Christians start “pogromming [sic] the Jews.” A “pogrom” refers to violent attacks on Jews in Russia and in other countries, the goal of which is to massacre or expel the Jewish population.

“Grandfather” is a figurehead among NSM members; his violent and antisemitic rhetoric serves as a rallying cry, encouraging hatred and real-world activities to “overcome fear of being hated.” In one post on February 1, 2022, he even writes “Let me clear up any questions. My goal is to [LEGALLY] become the most hated man in Florida.”

This February 1, 2022, post came on the heels of a January 29 NSM demonstration in Orlando, Florida, in which three NSM members were arrested for hate crime assault against a Jewish man. During the incident, a Jewish passerby saw the demonstration and stopped to confront the group. He was subsequently spit on, pepper-sprayed and punched, according to his own account and corroborating video of the altercation.

Another video shows Wydner yelling at the Jewish man and spitting into his car, which prompted a physical altercation. In Wydner’s Telegram posts about the incident, he noted plans to confront the “obnoxiously arrogant and violent Jew” at the Orange County courthouse and “This may have several sequels. Praise the Lord. And, as always, Heil Hitler!”

Uncovering and publicly identifying individuals such as Wydner who are responsible for these hateful incidents is an important way to hold them accountable for their actions.