Rock musician and right-wing activist Ted Nugent surprised many of his followers on February 8 when he posted to his Facebook page a blatantly anti-Semitic graphic that labeled a dozen prominent supporters of gun control measures as Jews and asked “So who is really behind gun control?” 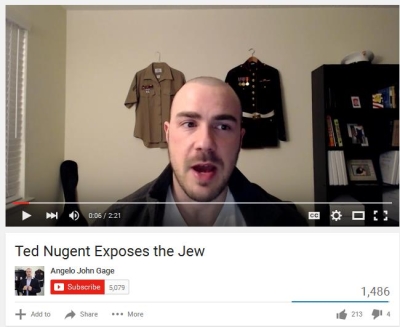 The graphic was one that had circulated in white supremacist circles for several years before Nugent gave it new life, telling his followers to “Know these punks. They hate freedom, they hate good over evil…you know how evil they are.”

To their credit, a number of Nugent fans expressed dismay at his posting. One prophetic Nugent follower, a self-described 40-year fan, described the post as “appalling” and informed the aging rocker that he had just “opened the gates for hundreds of Jew haters and Holocaust deniers to pour out their garbage on your page.”

Sadly, that was exactly what happened. Predictably, white supremacists and anti-Semites flooded to Nugent’s Facebook page to endorse his post and share it with their own Facebook friends (in less than 24 hours, the post had been shared over 2,800 times). Hundreds of white supremacists rushed to exploit and amplify Nugent’s post with their own propaganda, including a number of prominent white supremacists, such as former Klansman David Duke, neo-Nazi David Pringle, Traditionalist Youth Network founder Matt Heimbach and former National Youth Front leader Angelo John Gage.

Gage, a white supremacist activist, blogger and occasional political candidate, helped start the rush when he quickly posted a YouTube video about Nugent’s posting, saying “it shows all these Jews, all of them,” and urging like-minded people to go to Facebook and “start blasting” anti-Semitic propaganda. Gage was not alone. Scott Roberts, another anti-Semite, posted his own YouTube video about the incident, explaining that “we seized this opportunity, Angelo, myself, David Duke…we are injecting that anti-Semitic truth, and taking the point [Nugent] initially came out with and hammering it home.”

On the white supremacist discussion forum Stormfront, neo-Nazis and other white supremacists made similar pleas. “Anyone that is pro-white or ‘alt-right’,” posted user “RavenClaw, “needs to jump on this and comment. Post David Duke videos on there.” Another Stormfronter, “PolishSlavAryan,” asked, “Can we all work together as a team to make it go viral? The mainstream needs to know.” An Oregon Stormfronter explained that “even at this early point the exposure is priceless…Some will look into the ‘jewish problem’ a bit further. Win.”

Hundreds of anti-Semites indeed flocked to Nugent’s Facebook page to share their opinions of Jews. “Jews are the existential enemy to the white race and need to be exterminated off the face of [the] Earth,” wrote a Facebook user with the screen name “Max Macro.” User Dan Dean echoed those sentiments: “Zionists Jews are your deadliest enemy. Virtual wolves in sheep’s clothing. Deep darkness cloaked in a false light.” Others took the opportunity to promote anti-Semitic conspiracy theories, Holocaust denial, and anti-Semitic stereotypes, epithets and canards.

A Facebook user with the Holocaust-themed screen name “Zykklon Beaner” urged Nugent not to retract his statement: “No apologies, Ted, stick by your guns, literally and figuratively! F__k these supposed ‘chosen’ Zionist scum!”

So far, Nugent has neither apologized for or deleted his post. To date, his only reaction was to make another post in which he raged against people who had called his original message anti-Semitic and asked how anyone “could possibly not know that Jews for gun control are Nazis in disguise?” Meanwhile, he wrote, “I adjust my yamika [sic] at my barmitzva [sic] playing my kosher guitar.”