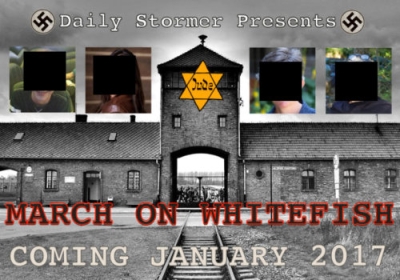 Andrew Anglin, the neo-Nazi who runs The Daily Stormer, a blatantly racist and anti-Semitic website, has ratcheted up his campaign of harassment against the Jewish community in and around Whitefish, Montana, including announcing an armed march in the town by white supremacists that he has scheduled for January.

Whitefish is the part-time home of Richard Spencer, a prominent spokesperson within the white supremacist alt right, and his parents. Spencer’s mother claimed in a recent article that she was being harassed to sell her property in the town because of her son’s views. As evidence, she made public emails between herself and a realtor, who happens to be Jewish, though Spencer’s mother did not point this out.

On December 16, Anglin reacted to the article by encouraging his “troll army” of neo-Nazis and other white supremacists to contact Jews in the small town and oppose their “Jew agenda.”  Moreover, Anglin posted photos to his website of a number of Jewish residents of Whitefish, including a child, and superimposed a yellow Jewish star with the word “Jude” on the pictures.

Since the release of the emails, the realtor and her family have reportedly received numerous threats, as have other Jews in the town.

Though the reaction to Anglin’s tactics has been overwhelmingly negative, the white supremacist has recently doubled down on his efforts to target them.  On December 21, Anglin wrote an article for his site in which he threatened to post a list of business associates for the realtor and her family, as well as others associated with an anti-hate group in town.  He encouraged his followers to demand that these associates cut their business ties with the realtor and those associated with the anti-hate group.

Anglin also encouraged his supporters to troll a Jewish journalist who wrote an article about the situation and a Jewish rabbi who encouraged people to send notes of sympathy to the harassment victims in Whitefish. The rabbi asked people to put a menorah in their window to show solidarity with the Jews of Whitefish.

In response, Anglin told his followers to put Nazi flags in their windows and to put the Nazi swastika on their cars, homes and businesses, though he has no real base of support in Whitefish. He also encouraged followers everywhere to send hateful messages to two anti-hate organizations targeted by Anglin’s campaign.

On December 23, Anglin made good on his threat from two days earlier, posting names and contact information for a number of different businesses and organizations, labeling them “terror groups” and “terror-supporting businesses.”  Describing his harassment campaign as a “revolution,” Anglin wrote that “when we win this, every single one of these Jews will think twice before coming after us and our families.”

In this posting, he also declared that he was planning an “armed protest” in Whitefish in January, claiming that he would personally lead such a protest and would even be “busing in skinheads from the Bay Area.”  Anglin wrote that “my lawyer is telling me we can easily march through…town carrying high-powered automatic rifles.” Possession of automatic weapons is illegal under most circumstances, so he may have been referring to assault-style weapons.

Not only is Anglin harassing the Jewish community of Whitefish, he is at the same time exploiting the situation there to promote anti-Semitic conspiracy theories about Jewish power and control. He alleges that Jews have targeted white supremacists and anti-Semites but now he is somehow turning the tables on them.

Anglin has carried out anti-Semitic harassment campaigns before.  In the spring of 2016, he encouraged people to troll Jewish journalists who were critical of Donald Trump during the Republican primary campaign. He also launched a harassment campaign in October 2014 against Jewish politician Luciana Berger, a British MP, after a white supremacist was arrested for harassing her.