White Supremacists Double Down on Propaganda in 2019 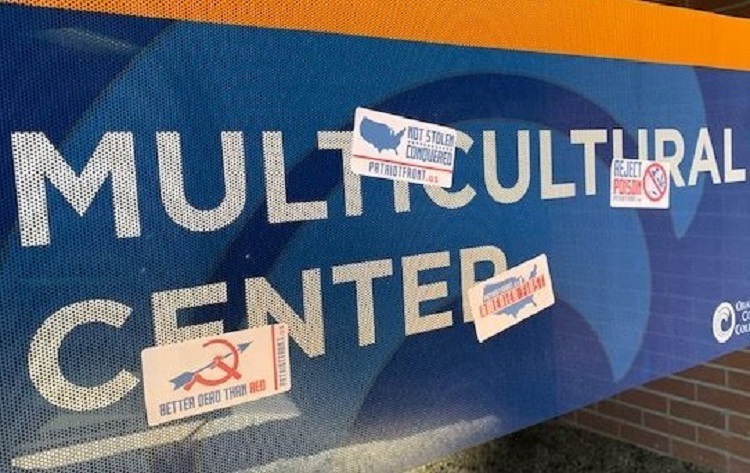 Click here to view a PDF version of this blog.

ADL’s Center on Extremism tracked an ever-growing number of white supremacist propaganda efforts in 2019, including the distribution of racist, anti-Semitic and anti-LGBTQ fliers, stickers, banners and posters. The 2019 data shows an increase of incidents both on and off campus, with a total of 2,713 cases reported (averaging more than seven incidents per day), compared to 1,214 in 2018 – a doubling in activity year over year. This is the highest number of propaganda incidents ADL has ever recorded.

The 2019 propaganda touched every state except Hawaii, with the highest levels of activity in the states of California, Texas, New York, Massachusetts, New Jersey, Ohio, Virginia, Kentucky, Washington and Florida. ADL’s H.E.A.T. Map provides a visual representation of the propaganda distribution efforts by geographic location and highlights other specific trends.

Although white supremacists have always leafleted U.S. campuses, their campaign targeting college students ramped up in January 2016 and has continued since then. More than four years later, their on-campus propaganda efforts are still on the rise.

Approximately one-fourth (630) of the total (2,711) white supremacist propaganda incidents in 2019 took place on campus – nearly double the 320 campus incidents counted in 2018. The 2019 propaganda efforts targeted 433 different campuses in 43 states and the District of Columbia. An overwhelming majority of the campuses (90 percent) were targeted only once or twice, which suggests that despite their increased efforts, white supremacists seem to have failed to gain a sustained foothold on campus.

For the 2019 fall semester, September through December, ADL documented 410 incidents – more than double any proceeding semester and a 159 percent increase from the 158 incidents counted during the 2019 spring semester. The semester to semester increase was largely due to a propaganda distribution campaign orchestrated by Patriot Front that specifically focused on college campuses during the months of September and October. 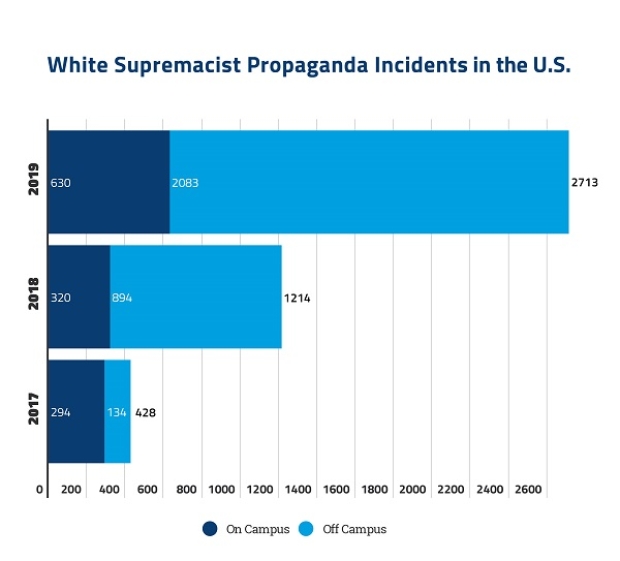 Over the course of 2019, dozens of white supremacist groups distributed propaganda, but three groups - Patriot Front, American Identity Movement and the New Jersey European Heritage Association - were responsible for approximately 90 percent of the activity.

Texas-based Patriot Front was responsible for 66 percent of all propaganda incidents (67 percent of non-campus and 59 percent of on-campus), far more than any other group. The group distributed propaganda in all but two states (Hawaii and Delaware), but was most active in Texas, California, Massachusetts, Ohio, Virginia and New York.

Since its formation in August 2017, Patriot Front has used its own iteration of “patriotism” to promote its white supremacist and neo-fascist ideology. In 2019, the group continued to use red, white and blue color-schemed propaganda. It also added a few new messages to its propaganda repertoire, including “One Nation Against Invasion,” “For the Nation Against the State” and “America is Not for Sale.”

On at least 50 occasions, Patriot Front hung banners from buildings, overpasses or footbridges emblazoned with messages such as “Revolution is Tradition,” “Reclaim America” and “Deport Them All.”

American Identity Movement (AIM), previously known as Identity Evropa, was responsible for approximately 16 percent of all propaganda (12 percent of non-campus and 30 percent of on-campus). AIM’s total number of distribution incidents for 2019 (444) fell short of their 2018 efforts (502), but they continued to focus on college campuses at the same rate - 189 incidents in 2019 compared to 190 in 2018.

Under the AIM banner, the group has moved away from Europe-centric propaganda in favor of a message promoting the preservation of America’s “white culture” under the guise of patriotism. The group’s new propaganda includes phrases such as “Defend America,” “Nationalism not Globalism,” “Protect American Workers,” “Diversity Destroys Nations” and “Embrace Your Identity.”

The New Jersey European Heritage Association (NJEHA), founded in 2018, was responsible for approximately 9 percent of all white supremacist propaganda incidents in the U.S. (10 percent of non-campus propaganda, but only 5 percent on campus). Originally focused on New Jersey, the group has expanded its activity to other states, including Arkansas, Florida, Indiana, New York and Pennsylvania.

NJEHA often distributes explicitly white supremacist propaganda claiming the white race is endangered and promoting the white supremacist "14 Words" slogan: “We must secure the existence of our people and a future for white children.” Some of the group’s propaganda promotes the conspiracy theory that Israel intentionally targeted a U.S. warship during the height of the 1967 Six-Day War.NJEHA’s most recent flier, “Wake Up America – Your Country has been Subverted,” contains numerous anti-Semitic tropes and refers to Jews as “destroyers.” 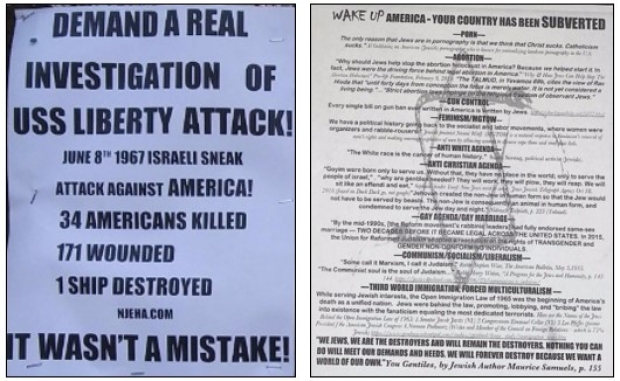 Daily Stormer Book Clubs (SBC) were responsible for 82 propaganda distributions, a near match to their 2018 total of 80 incidents. SBC contributed approximately 3 percent of all propaganda incidents in 2019. Generally anti-Semitic, and often used to target college campuses or Jewish institutions, its propaganda is largely distributed as part of coordinated efforts by multiple chapters.

SBC’s 2019 fliers included claims that all hate crimes are hoaxes, the Holocaust is fake news and that Jews molest children and “push” pornography “on our children.” A flier distributed during the summer of 2019 depicted Brenton Tarrant, the shooter charged with killing 51 worshipers at mosques in Christchurch, New Zealand, with the Star of David and the word “Jude” covering his mouth, and warned, “Censorship Ends in Violence.” In August, SBC distributed a racist flier showing a cartoon image of the “Squad,” a group of four Democratic congresswomen, with the words, “Send them back! Deport the commie brown infestation.”

America’s Klan movement continued its decline in 2019.  The combined efforts of seven different Klan groups resulted in only 53 propaganda distributions – a significant drop from the 102 incidents in 2018 and well off the Klan’s five-year average of 82.

More than half (35 of 53) of the 2019 Klan propaganda was attributed to the North Carolina-based Loyal White Knights (LWK), a Nazified Klan group best known for its vitriolic and often anti-Semitic propaganda. Though the group’s fliers occasionally appear in far-flung states, the LWK is best categorized as a mid-Atlantic regional Klan, and in 2019, an overwhelming majority of its fliering targeted that region, particularly Virginia, Pennsylvania and West Virginia.

White supremacists continued to rely heavily on so-called flash demonstrations, preferring not to risk the exposure of pre-publicized events.

2019 saw very few pre-announced white supremacist events, rallies or protests, and those that did occur suffered from dismal attendance and were met with heavy opposition.

The highlights include a March rally in Little Rock, Arkansas, when approximately 15 individuals associated with the neo-Nazi Shield Wall Network joined a rally against gun legislation and abortion organized by the Hiwaymen, a group that combines the ideology of the militia-oriented three percenters and that of the neo-Confederate movement. On May 25, a Dayton, Ohio, Klan rally organized by the Honorable Sacred Knights drew just nine participants, but attracted more than 500 counter-protesters. Four days later, Rick Tyler, a white supremacist politician and member of the American Freedom Party, gave his  "White Nationalism: Fact or Fiction” speech to an empty auditorium at the University of Tennessee.  In June, ten members of the neo-Nazi National Socialist Movement staged a protest of Detroit’s Motor City Pride Festival, carrying guns and shouting homophobic and anti-Semitic slurs. And in August, when approximately 16 members of the Loyal White Knights gathered in front of the county courthouse in Hillsborough, North Carolina, locals quickly mobilized a peaceful counter-protest which successfully blocked any view of the Klan members.

AIM held just a few flash demonstrations in 2019, but one of them was among the year’s largest events, which took place in March and included approximately 80 AIM members demonstrating in front of the Tennessee state capitol building. The League of the South used the tactic several times as well, including at a February appearance at Little Rock’s Central High School (the site of forced desegregation in 1957) and a November appearance at a Tallahatchie County, Mississippi, memorial for Emmett Till, a 14-year-old African American who was lynched in 1955.

Some flash demonstrations took the form of counter-protests, as white supremacists demonstrated against a range of events including ICE protests, diversity and pride festivals, book readings and the removal of Confederate monuments.

The most vitriolic counter-protest took place when approximately 15 members of the Shield Wall Network disrupted a Holocaust memorial event in Russellville, Arkansas, chanting “6 million more,” waving swastika flags, stomping on Israeli flags and holding signs that read, “The Holocaust didn’t happen, but it should have” and “YHVH [Yehovah] has the oven preheated.”

Private gatherings in 2019 were small and localized. ADL counted 27 such events throughout the year, including several Klan rallies on private property that drew one- or two-dozen attendees. 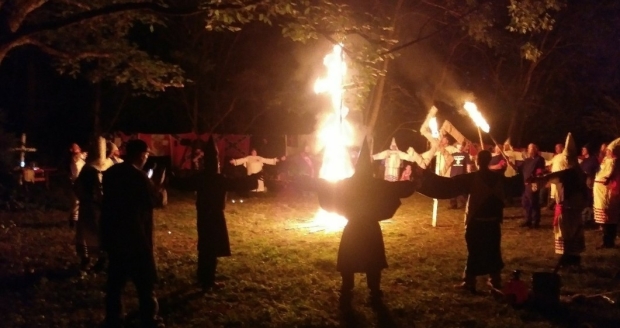 So called “suit and tie” white supremacists held a number of (fairly well attended) private conferences in 2019. These events, sponsored by groups including American Identity Movement, American Renaissance, American Freedom Party and the Council of Conservative Citizens, typically drew between 50 and 150 attendees. All were held at the Montgomery Bell State Park in Burns, Tennessee, a public location that remains a favorite for white supremacists who are forced out of private venues. Tennessee state parks are required by law to allow any group – regardless of ideology – to rent their facilities.