UPDATE: At a July 17 campaign rally in Greenville, North Carolina, Trump supporters broke out into chants of “Send Her Back,” an apparent reference to Ilhan Omar, a naturalized U.S. citizen who was born in Somalia. President Trump, who appeared to do nothing to stop the chants as they happened, initially claimed he was “not particularly happy” about the crowd’s chanting, but several days later defended rally attendees, calling them “incredible people…incredible patriots.”

Andrew Anglin again praised the President, writing on the Daily Stormer the day after the rally: “Telling those women to go back to their countries is by far the most racist thing he’s ever said – especially since one of them was a black American, descended from slaves. And by refusing to apologize, he has effectively normalized the opinion among the masses of goyim that you can believe that America is a white country, for white people – and that brown people are our guests and if they don’t like being guests then they have to go home.”

Meanwhile, on Occidental Dissent, white supremacist Hunter Wallace posted his dissatisfaction, arguing that Mr. Trump does not take white nationalist rhetoric far enough, and is only targeting the congresswomen because they are not adequately supportive of Israel:

“The mainstream media is going to try to run with the narrative that he is a White Nationalist who wants to deport ‘women of color.’ In fact, his real beef with them is their lack of support for Israel. If they were only bashing White people, he wouldn’t have a problem with them.”

President Trump’s recent racist tweet, posted on Sunday, July 14, was greeted with enthusiasm by white supremacists and other extremists. 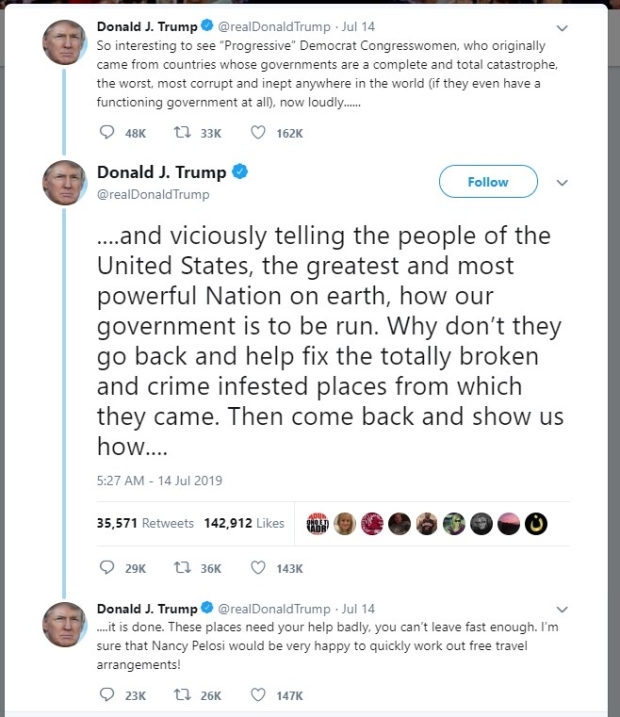 Mr. Trump’s inference that four U.S. Representatives who are women of color – Ilhan Omar (D-MN), Alexandria Ocasio-Cortez (D-NY), Rashida Tlaib (D-MI) and Ayana Pressley (D-MA) – are not U.S. citizens, and that they should “go back” to their “original” countries, was echoed and applauded online by a raft of racist extremists.

Neo-Nazi Andrew Anglin was apparently thrilled by the tweets, posting on his popular Daily Stormer website: “Man, President Trump’s Twitter account has been pure fire lately. This might be the funniest thing he’s ever tweeted. This is the kind of WHITE NATIONALISM we elected him for. And we’re obviously seeing it only because there’s another election coming up. But I’ll tell you, even knowing that, it still feels so good.”

Anglin also emphasized the political implications of Mr. Trump telling people of color to “go back” to their countries: “This is what elected Trump and this is what will always be the best way for him to gain support,” and underscored the importance of these comments being directed at U.S. citizens, particularly Rep. Pressley, who was born in Cincinnati: “So this is not some half-assed anti-immigrant white nationalism. Trump is literally telling American blacks to go back to Africa.”

Meanwhile, alt right figurehead Richard Spencer acknowledged the appeal of the President’s tweets to a range of alt right activists, but also appeared to warn that Trump was bound to disappoint white supremacists (again).

White supremacist podcaster “Sven Longshanks” primed his “Daily Nationalist” audience by praising the President: “Trump started the week in a great way today by tweeting that the four worst non-White communists in the Democrat Party should go back and fix their own countries first before trying to tell America what to do. Of course he is being accused of being ‘racist’ for pointing this out, as nobody can argue their countries of origin are not ‘the worst, most corrupt and inept anywhere in the world’.”

Another white supremacist podcaster, James Edwards of The Political Cesspool, responded to U.S. House Speaker Nancy Pelosi’s defense of the congresswomen with his own racist vitriol: 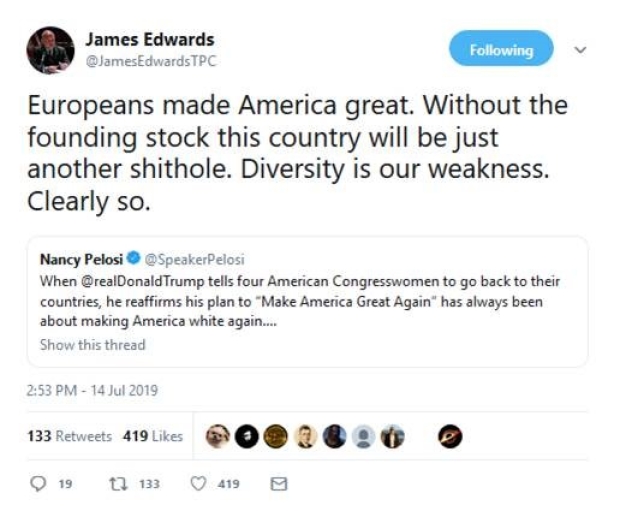 The President’s tweets are being celebrated elsewhere across the extremist spectrum. On Sunday, anti-Muslim bigot Pamela Geller, head of the Islamophobic American Freedom Defense Initiative/Stop Islamization of America reposted his tweets accompanied by this gleeful comment: 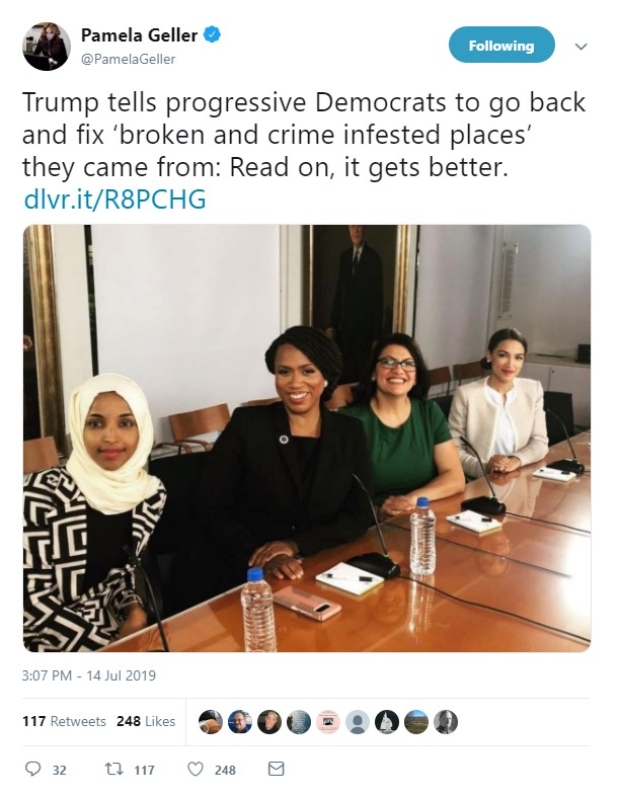