In the face of unprecedented attacks on the Jewish community, ADL conducted a survey of Jewish Americans to explore their experiences with antisemitism. We not only asked about people’s experiences -- from online harassment to overhearing hateful slurs to being physically attacked -- but we also explored the impact of these experiences.

Over half (54%) of Jews in America have either experienced or witnessed some form of incident that they believed was motivated by antisemitism over the past five years1. About half (49%) of Jews have heard antisemitic comments, slurs or threats targeted at others. One-in-five (21%) have been the target of antisemitism comments, slurs or threats. The same number (22%) report vandalization, damage or defacement of a Jewish institution they are associated with because of antisemitism. One-in-seven (14%) had someone they knew physically attacked because they were Jewish. One-in-twenty have had their home, car or property deliberately vandalized or defaced because of antisemitism (6%) or have been physically attacked (5%). 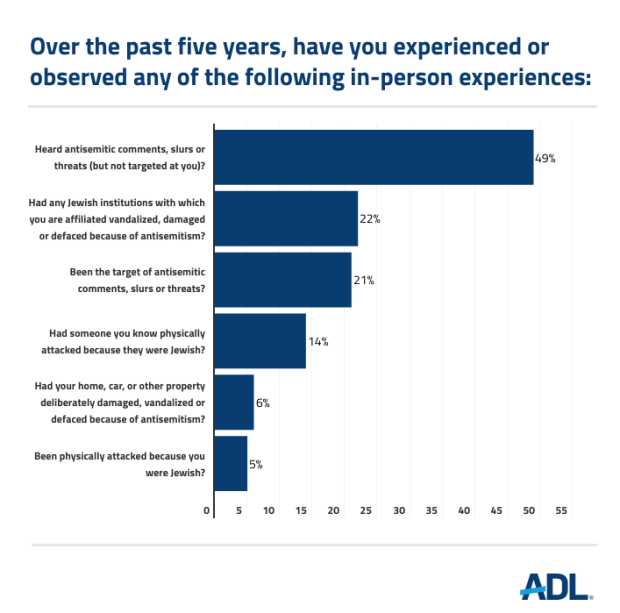 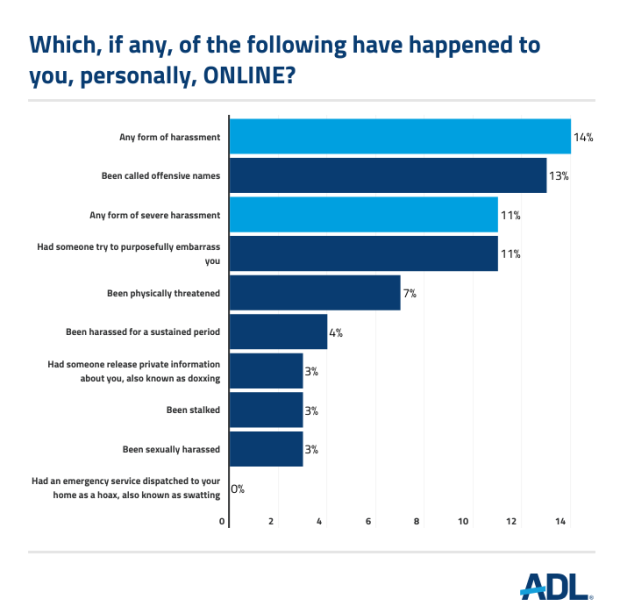 How worried are you about the following things happening in your community?

Nearly two thirds of Jews (63%) reported that they are less safe than they were a decade ago. Many Jewish-Americans are concerned about themselves, their institutions and their community. Most are concerned about attacks centered around their place of worship: More than half (51%) are worried about a violent attack at a synagogue or about a synagogue being defaced, damaged or vandalized.

Similar numbers of Jewish people are worried about their community members: Roughly half are worried that a person wearing a yarmulke, religious skullcap or other public display of Judaism will be physically assaulted (47%) or verbally harassed (50%) on the street or in a public place. 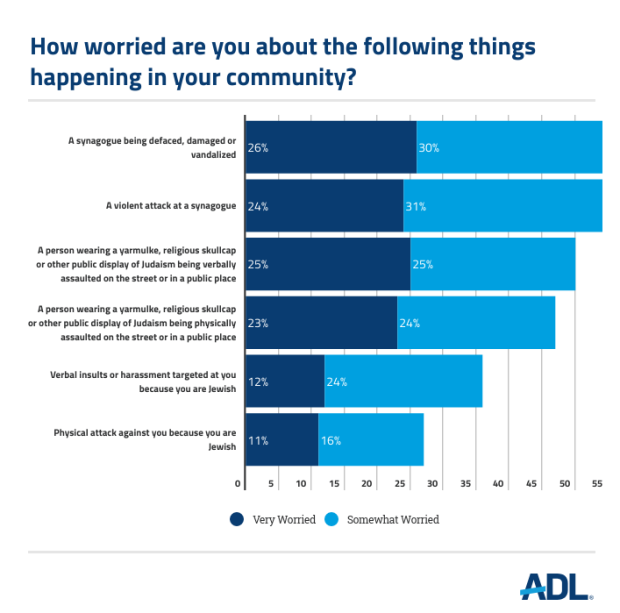 In the face of widespread anxiety about antisemitic attacks, some Jewish-Americans have modified their behaviors to minimize the risk of being targeted. More than one-in-four (27%) have employed at least one strategy to avoid being targeted. The most common strategy, adopted by more than one-in-ten (12%) Jews, is avoiding markers of Jewish identification -- for instance, by not using one’s last name, covering or not wearing a Jewish star, or not identifying as Jewish on a social media site. Almost one-in-ten (9%) have avoided wearing religious clothing or accessories.

As a result of Jewish people’s experiences with online hate and harassment, some have experienced emotional hardship. More than one-in-ten (11%) have had trouble sleeping, had trouble concentrating or felt anxious. Small numbers have taken steps to reduce risk to physical safety (4%), been impacted economically (4%), have had depressive or suicidal thoughts (2%), contacted law enforcement (2%) or contacted an attorney (1%).

The survey was conducted by YouGov, a leading public opinion and data analytics firm, on behalf of ADL, examining Jewish Americans’ experiences with antisemitism (both online and in the physical world). The survey of Jewish American adults over the age of 18 was conducted from January 17–30, 2020. A total of 538 responses were collected from Jewish Americans, 18 and older, and weighted to reflect the demographic makeup of Jewish people across the United States, according to Pew Research Center. Participants are rewarded for general participation in YouGov surveys but were not directly rewarded by ADL for their participation in this survey. The margin of sampling error for the full sample of respondents is plus or minus 4.4 percentage points.

Footnotes:
1 We report on incidents that are attributed to antisemitism by the respondents.
2 Reported results are Jewish respondents indicating that they experienced harassment as a result of their religion.

ADL gratefully acknowledges The ADL Lewy Family Institute for Combating Antisemitism for its sustained support and commitment to fighting antisemitism. ADL also thanks its individual, corporate and foundation advocates and contributors, whose vote of confidence in our work provides the resources for our research, analysis and programs fighting antisemitism and hate in the United States and around the globe.