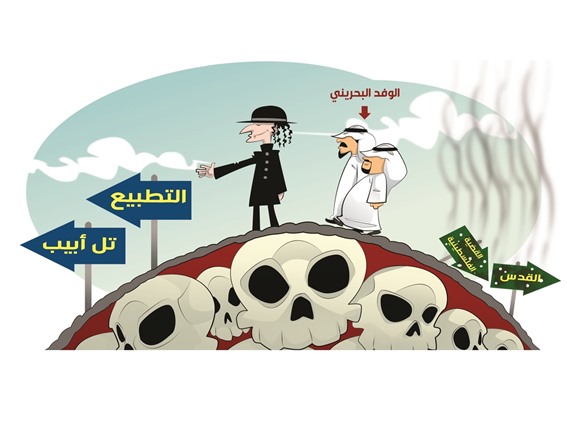 The Bahraini delegation is led by the Jewish figure in the direction of "Normalization" and "Tel-Aviv", and away from "Jerusalem" and "the Palestinian cause".

Cartoons published in Qatari media used anti-Semitic imagery in its criticism of a Bahraini non-governmental delegation to Israel as an act of betrayal of Arab nationalism.

According to reports, an unofficial Bahraini delegation comprised of religious figures made a visit to Jerusalem this month in order to convey a message of tolerance. Bahrain has no formal ties with Israel and this is considered a first-of-its-kind visit; in response to criticism over the visit, Bahrain’s state newswire emphasized that the delegation “does not represent any official entity.” It is, however, consistent with the Bahraini King’s recent "Declaration of Religious Tolerance," which was unveiled at an event at the Simon Wiesenthal Center in Los Angeles in September.

Following President Trump's recognition of Jerusalem as Israel's capital, however, Qatari media used anti-Semitic imagery to depict the delegation's visit to the city as a betrayal of the Palestinians and their connection to Jerusalem. One cartoon shows the delegation led by a stereotypical Orthodox Jew in the direction of "Normalization" and "Tel-Aviv", and in the opposite direction of "Jerusalem" and "the Palestinian cause", thus asserting that they betrayed both of these causes. Another cartoon shows the delegation walking in Jerusalem over a trail of blood from the body of a Palestinian civilian dragged by a glowering Jewish figure holding a knife, asserting again that the delegation is betraying the Palestinian cause. This image is particularly offensive given that it portrays a Jewish figure as slaughtering a Palestinian civilian with a knife, when in fact Israel has been the target of a protracted so-called “knife intifada” or “stabbing intifada” since 2015 in which dozens of Israeli citizens have been killed in over 180 stabbing attacks by Palestinian assailants. A third new cartoon from the Qatari press shows a Jewish figure who is apprehensive at the sight of a Bahraini figure reaching inside its garment, but is then flattered when the Bahraini is presenting him with a flower, thus suggesting to the reader that the Bahrainis should instead be more violent toward the Jewish figure.

Furthermore, Qatari media recently published additional cartoons similarly using anti-Semitic imagery in order to accuse a number of Arab countries of normalization with Israel, and in some cases even suggesting that they are dominated by it. One cartoon, for example, shows the Emirate of Abu Dhabi pushing the Arabs toward normalization with Israel, represented by a stereotype of an Orthodox Jew. Another cartoon depicts an orthodox Jew being fanned by a servant who is Egyptian President Abdul Fattah el-Sisi, suggesting that while Jews were subjugated by the ancient Egyptians in the past, today it is the other way around. These countries are currently the protagonists of an acrimonious diplomatic crisis in the Gulf, in which Bahrain, Saudi Arabia, the UAE, Egypt and several other countries severed ties with Qatar over its support for terrorist groups such as Hamas and the Taliban. Such cartoons illustrate once again that ties with Israel remain a taboo in public opinion and thus serve as a powerful weapon in intra-Arab rivalry. Notably, ADL has previously documented similar conspiratorial cartoons in the Arabic-language press that highlight the baseless claim of Israeli responsibility for the Qatar crisis, as well as anti-Semitic cartoons asserting falsely that Israel and the Jews are seizing or destroying the Al-Aqsa Mosque and Dome of the Rock in Jerusalem. 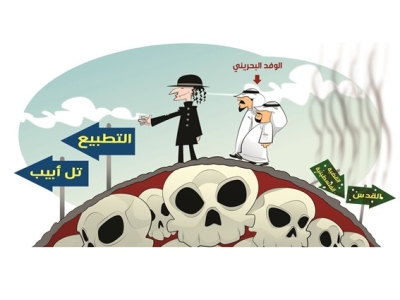 The Bahraini delegation is led by the Jewish figure in the direction of "Normalization" and "Tel-Aviv", and away from "Jerusalem" and "the Palestinian cause". 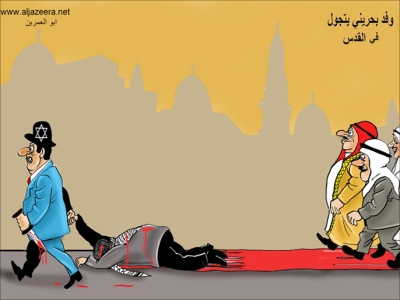 The delegation is shown walking in Jerusalem over the trail of blood from the body of a Palestinian dragged by a Jewish figure holding a knife. 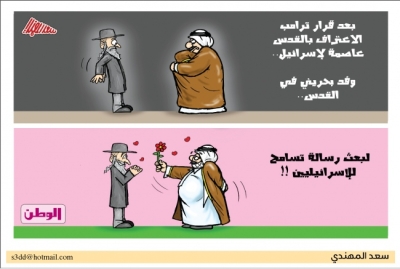 The Jewish figure is apprehensive at the sight of the Bahraini figure reaching inside its garment, but is flattered when he is presenting it with a flower. In Arabic: "After Trump's decision to recognize Jerusalem as Israel's capital… a Bahraini delegation in Jerusalem… to convey a message of tolerance to Israelis!!" 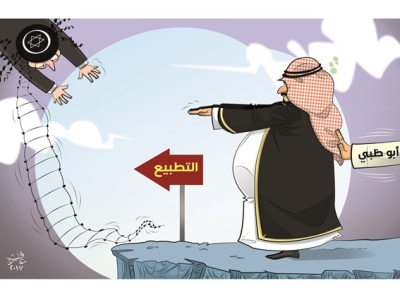 The Emirate of Abu Dhabi is depicted as pushing the Arabs toward normalization with Israel represented by an Orthodox Jew.

Headline: "Between Past and Present"

This cartoon suggests that while Jews have been subjugated by the ancient Egyptians, today the latters, represented by Egyptian President el-Sisi, are subjugated by Jews.