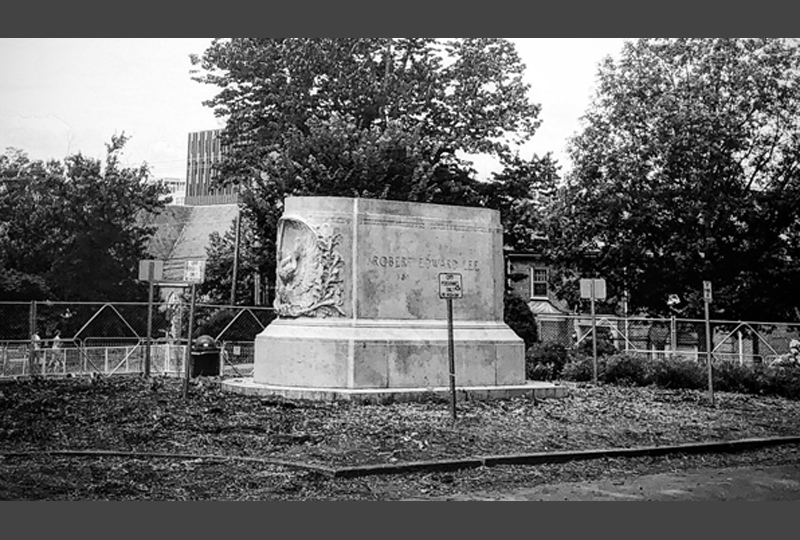 Two Years Ago, They Marched in Charlottesville. Where Are They Now?

July 2021: The statue of Confederate leader Robert E. Lee, a putative impetus for the Unite the Right Rally, was quietly removed from its pedestal in Charlottesville. Image credit: Rev Seth Wispelwey

Four years ago, on August 12, 2017, hundreds of far-right extremists descended on Charlottesville to protest the planned removal of the Robert E. Lee statue from the city’s center. “Unite the Right” was the largest and most violent public assembly of white supremacists in decades.

Groups that gathered in Charlottesville have undergone significant changes in the interim years; while some have faded away, others have gained membership and visibility. More on these developments below.

And while the violence and vitriol on display at Unite the Right (UTR) shocked most Americans, the 2017 event was considerably less deadly – and more universally condemned – than the January 6, 2021, insurrection.

The fourth anniversary of UTR arrives as the country continues to grapple with the fallout from the January 6, 2021, attack on the U.S. Capitol. And while the two demonstrations were similar in some ways, there are important distinctions.

Unite the Right participants wanted to show strength in numbers, and ultimately, the event culminated in a violent and celebratory show of force. Those who stormed the U.S. Capitol wanted to interfere with the electoral process, a much more serious intention. In addition, the scope and scale of the January 6 attack, particularly the violence used against law enforcement, far exceeded the violence seen at UTR.

The participants in these events were also different. UTR participants were mostly white supremacists while the January 6 insurrectionists consisted of a small number of white supremacists, an array of anti-government extremists and a huge group of radicalized Trump supporters. Only three individuals have been identified as attendees of both events: Nick Fuentes, a prominent white supremacist pundit, attended the January 6 event but did not enter the Capitol; Tim Gionet, a white supremacist troll known as Baked Alaska who is facing federal charges after he allegedly streamed live video from inside the Capitol; and Gabriel Brown, a Proud Boy supporter and live-streamer who has been charged with destroying media equipment outside the Capitol.

Another distinction lies in the public reaction to the events. UTR participants were condemned by the majority of Americans, but very few faced criminal charges. In contrast, while hundreds of January 6 participants have been charged with criminal activity related to their actions that day, they have the support of many on the far-right. In recent weeks,  right-wing media personalities and mainstream GOP officials have characterized those facing federal charges for storming the Capitol as peaceful protesters and “political prisoners,” with some even organizing events to express support for the insurrectionists. In early July, Luis Miguel, a Republican candidate for U.S. Senate in Florida, organized “Free our Patriots” rally in Tallahassee. Look Ahead America, founded by former Trump campaign staffer Matt Braynard, has announced a September 18 rally in Washington D.C. dubbed “JusticeforJ6.”

There is, however, one glaring, alarming similarity between UTR and January 6. In the aftermath of both events, disinformation and far-fetched conspiracy theories proliferated, in attempts to shift blame from those responsible. UTR conspiracies posited that the event was a “false flag” operation designed to discredit the alt right, that participants were hired “crisis actors,” that James Fields, who deliberately drove his vehicle into a crowd of protesters, injuring 19 and killing Heather Heyer, was actually a left-wing anti-fascist activist, and that police were told to stand down. These falsehoods were spread by far-right pundits and agitators such as Alex Jones, Mike Cernovich and Dinesh D’Souza, and amplified by Republican congressmen including Dana Rohrabacher, Paul Gosar and Louis Gohmert.

This same phenomenon occurred in the wake of January 6, 2021.

In the days and weeks following the insurrection, conspiracy theories emerged online blaming the violence on left-wing agitators linked to antifa. Right-wing media outlets promoted this lie, as did U.S. Reps Mo Brooks, Matt Gaetz and Paul Gosar, as well as U.S. Sen. Ron Johnson. In June, a conspiracy theory emerged claiming that the events of January 6 were orchestrated by the FBI, suggesting that the “unindicted co-conspirators” mentioned in some indictments could be undercover agents or informants. Fox News pundit Tucker Carlson reinforced the conspiracy by talking about it on his show, while several Republican lawmakers (including Gosar, Gaetz, Johnson and U.S. Rep. Marjorie Taylor Greene) promoted the false flag theory and called for answers from the FBI Director. Former President Trump has promoted the conspiracy theory that Ashli Babbitt, the QAnon adherent and insurrectionist who was shot and killed as she stormed the Capitol, was killed by the “head of security for a certain high official, a Democrat.”

In August 2019, two years after UTR, ADL published a report on the lingering repercussions for many of the event’s participants. Four years after the deadly rally, Sines vs Kessler, the case filed against key organizers and participants of the deadly rally on behalf of Charlottesville-area residents, is finally slated to begin trial on October 25.

ADL’s Center on Extremism reviewed the extremist groups that participated and their paths to the present.