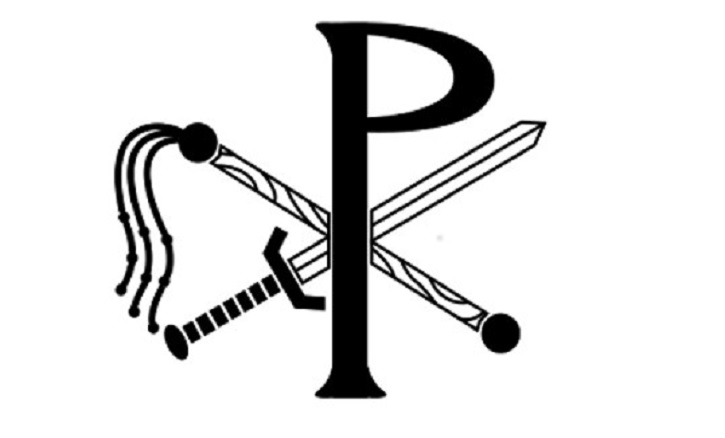 Update: In May 2020, the LoSA fell apart when the bulk of the group’s membership left to join NSC-Dixie, a southern chapter of the New England-based Nationalist Social Club. By March 2021, the NSC announced they would no longer have chapters outside the New England area. Members of NSC-Dixie attempted to rebrand under other names, but fell apart in April 2021 after Craig Spaulding, their most prominent leader and organizer passed away.

Founded in 2019 by former members of the now defunct Traditionalist Worker Party, the Legion of Saint Ambrose (aka Christ Gang) is a small white supremacist group based in Knoxville, Tennessee. Using themes from Christianity to justify its white supremacist beliefs, the Legion seeks to rebuild America as a white Christian nation, claiming that America was “forged, founded, and preserved by European Christians.” Legion members intend to “preserve and enforce” the culture, principles and morals that they claim are associated with America’s founding fathers and traditional Christians.

“We recognize that our nation was: forged, founded, and preserved by European Christians. Thus, we embrace the European roots of our nation and people, and seek to preserve and enforce the: culture, principals [sic], and morals of our ancestors and Faith.” - Legion of St Ambrose website April 5, 2019

Saint Aurelius Ambrose, the group’s namesake, was an influential religious figure in the late fourth century who fought for the supremacy of the Catholic Church over the Roman emperor. This emphasis on Church supremacy by Ambrose is used by the Legion for part of its platform, which calls for a Christian state religion.

The Legion also appears to be influenced by Romanian Corneliu Zelea Codreanu, a fascist politician who founded the Iron Guard, an extreme-right political party in Romania in the interwar period. Codreanu promoted anti-Semitism and advocated for the elimination of Jews from Romania. The Iron Guard, also known as the Legion of the Archangel Michael, massacred tens of thousands Romanian Jews in the 1930s and during the Holocaust. Like the Legion, the ideology of the Iron Guard included strong elements of Orthodox Christianity. Several Legion members and supporters have made references to Codreanu and used his quotes on social media.

In its rhetoric and propaganda, and to justify its own extreme beliefs, the Legion utilizes language lifted—often out of context—from the writings of various early Christian religious figures and Christian Orthodox theologians. 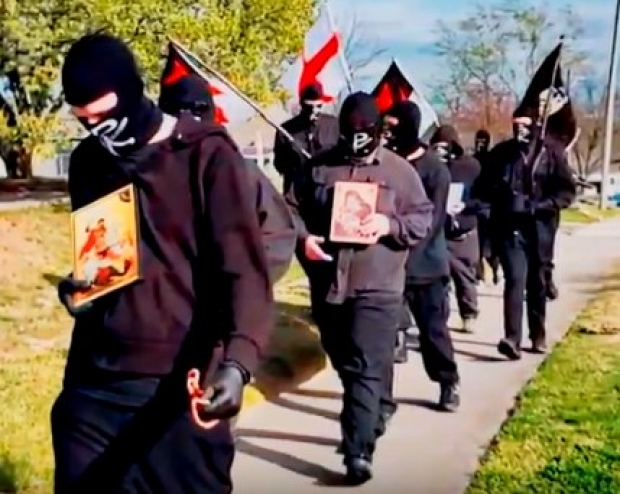 For example, in April 2019, Legion members met in Waynesville, North Carolina, for a book burning, destroying books they termed “degenerate,” on subjects such as homosexuality, feminism, communism and pagan religions. To justify the book burning,  the Legion posted a quote from Saint Constantine during the so-called Arian Controversy of the fourth century, in which Constantine urged that the writings of Arius, whose theological views differed from his own, be burned. The Arian Controversy, however, has nothing to do with the topics hated by the Legion members; they simply used the quote to justify their own extreme actions.

Similarly, the Legion used a quote condemning lust from St. John Chrysostom to justify its opposition to the University of Tennessee-Knoxville’s annual Sex Week, which provides students with opportunities to discuss subjects such as sexual assault, the intersection of faith and sexuality, mental health and sex, and other topics related to sex and sexuality. And at a demonstration against Planned Parenthood in March 2019, Legion members created a banner invoking St. Clement of Alexandria, an early church figure who opposed abortion.

Members and supporters of the Legion are former members of the Traditionalist Worker Party (TWP), which was led by Matthew Heimbach. As TWP’s leader, Heimbach, who has also been heavily influenced by Corneliu Codreanu, often used the flag of the Iron Guard, as well as the Archangel Michael's Cross (the symbol found at the flag's center). Archangel Michael's Cross represents prison bars, because the Romanian fascist Codreanu claimed that while he was in prison he was inspired by an icon depicting the Archangel Michael. 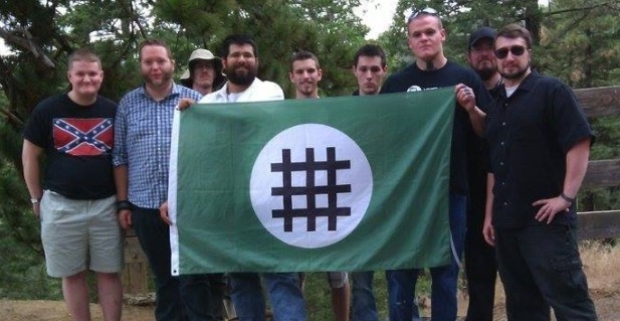 Heimbach, fourth from left, and other TWP members posing with Iron Guard flag.

The Legion aspires to create a theocratic totalitarian state built on principles of early Christianity with progressive allowances for labor unions, healthcare, criminal rehabilitation and environmental protection.  Members believe that white people are suffering from the negative influences of modernity, capitalism, and communism, and they aim to “deliver them into the Church.”

The collective soul of our folk has experienced greater depths of decay and depravity in modern times than perhaps any other time in history. Our aim is to offer support to the disenfranchised and dejected, and deliver them into the Church.

We refuse to accept the materialist narrative of either capitalism or communism, as both models serve to enslave and destroy our folk.

The group’s mission statement, posted on their website, clearly expresses their desire for a state-mandated religion. Their platform seeks to outlaw anti-Christian rhetoric in the “media, education systems, and any other mass media systems” and demands that “all education institutions teach and adhere to Traditional Christian values.” They also mandate that their nation state recognize Christian Holy Days and grant all traditional Christian churches a tax-exempt status “not revocable if the Priests speak on political matters.”

According to their mission statement, they also advocate for a return to a patriarchal society, traditional sex roles, and isolation from non-Christian nations. They also seek to outlaw or ban gay marriage, miscegenation, abortion, and kosher or halal food.

Colton Williams (aka Cole Williams) is the self-identified leader of the group. In a March 13, 2019, Facebook post, he shared a Scribd.com link to the group’s mission statement and wrote, “This mission statement of my new organization, The Legion of St. Ambrose.” 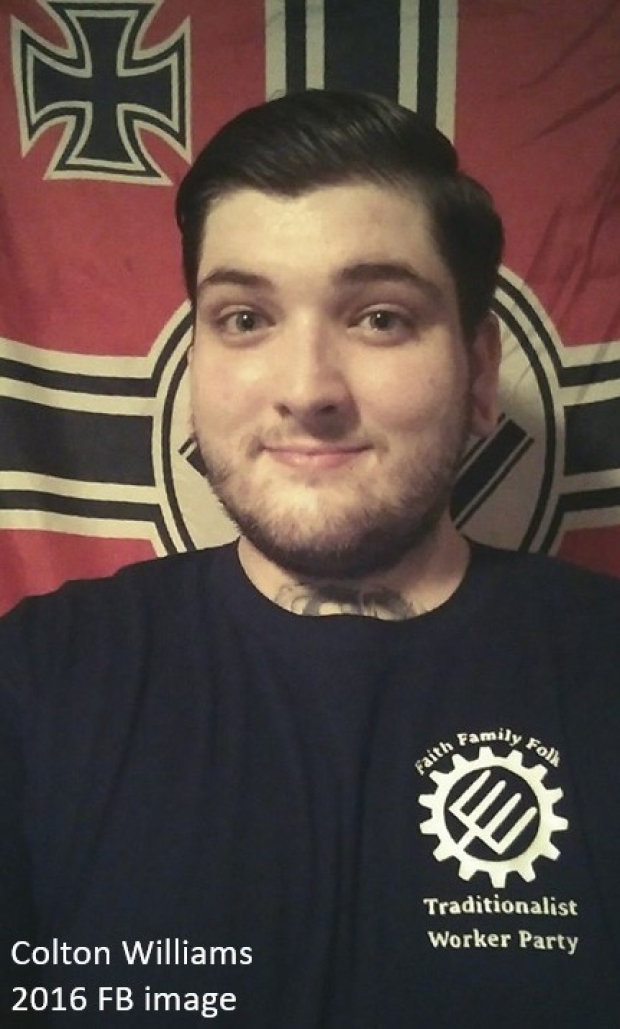 Williams was an extremely active member of the Traditionalist Worker Party from its early days in 2016 through its dissolution in March 2018.

In the wake of the TWP disbanding, Williams wrote in a Facebook post, “The remnants of the TWP are unfortunately seeking to schism from explicit national socialism in order to appeal to boomers and normies. ...I will go on to work on a new project myself essentially carrying on our American Blackshirt aesthetic while being openly NS. ...I hope to see a proper legion of Blackshirts marching with me towards the grand vision that national socialism presents.”

After the disbanding of TWP and prior to the establishment of the Legion, Williams and some of his former TWP associates participated in a variety of demonstrations and counter-protests with other white supremacists in Tennessee. Those events include protesting Tri Pride 2018 in Johnson City; counter-protesting an August 2018 demonstration against Brett Kavanaugh in Knoxville and protesting a Knoxville campaign event for Tennessee House of Representative candidate Edward Nelson in July 2018. 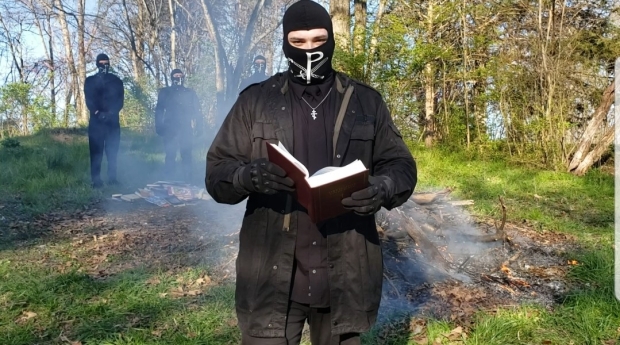 During public demonstrations, Legion members have used black bloc, a tactic used by groups of protesters who wear all black clothing, including gloves and masks, to conceal their identities. The ski masks used by Legion members include the group’s symbol. The symbol, which invokes the Chi Rho, one of the earliest forms of Christogram, consists of a large P overlaying a sword crossed with a stick weapon that favors a cat o’ nine tails whip. During demonstrations, group members have carried flags originally associated with the Knights Templar, a European Catholic military order that fought during the Crusades. Today, the flag is often used by anti-Muslim groups and individuals.

Knoxville, Tennessee, April 5, 2019: The Legion spray painted “the rock” at the University of Tennessee with their propaganda and distributed fliers in the downtown area. 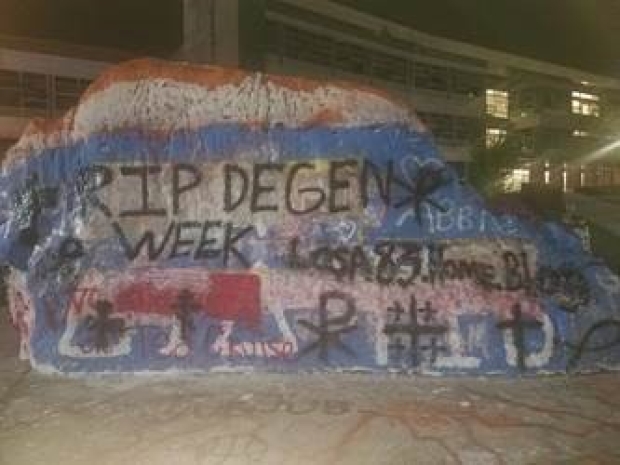 Waynesville, North Carolina, April 4, 2019: The Legion held a ritualistic book burning on private property. According to a blog article written on the group’s website, they burned books related to homosexuality, pop culture, heresy, feminism, pagan religions, communism and other anti-Christian works and authors. 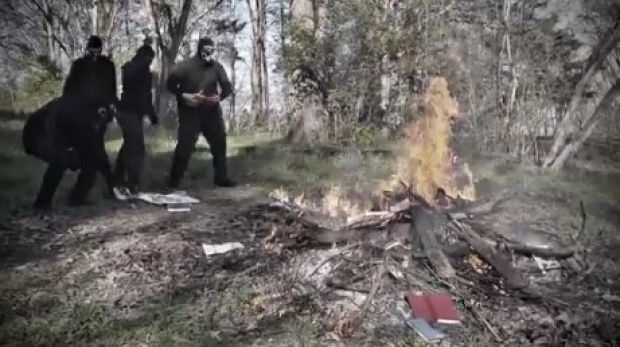 Knoxville, Tennessee, March 30, 2019: The Legion protested “Sex Week” an annual event held by the student group Sexual Empowerment and Awareness at the University of Tennessee. 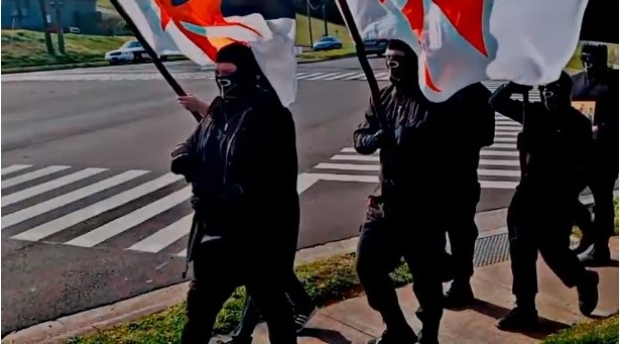 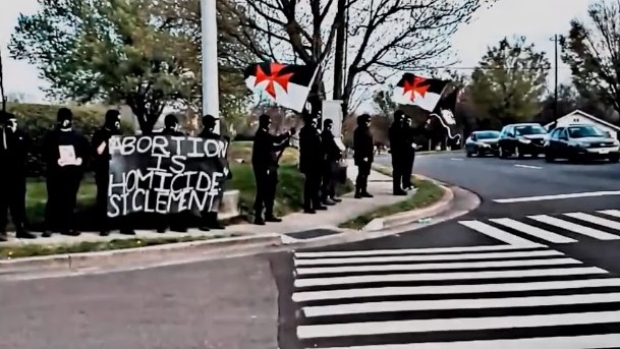 Little Rock, Arkansas, March 9, 2019: Legion members stood alongside members of the Shield Wall Network during a rally against firearm legislation and abortion at the Arkansas State Capitol. 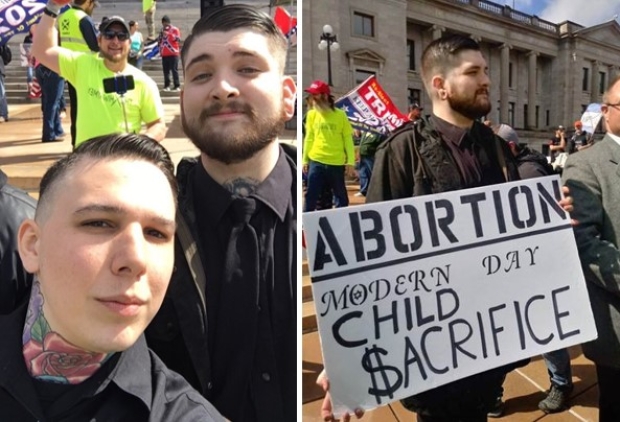